An Inquiry Into Morals

The author of Zen and the Art of Motorcycle Maintenance examines life's essential issues as he recounts the journey down the Hudson River in a sailboat of his philosopher-narrator Phaedrus.

An excerpt from Lila

Lila didn’t know he was here. She was sound asleep, apparently in some fearful dream. In the darkness he heard a grating sound of her teeth and felt her body suddenly turn as she struggled against some menace only she could see.

The light from the open hatch above was so dim it concealed whatever lines of cosmetics and age were there and now she looked softly cherubic, like a small girl with blond hair, wide cheekbones, a small turned-up nose, and a common child’s face that seemed so familiar it attracted a certain natural affection. He got the feeling that when morning came she should pop open her sky-blue eyes and they should sparkle with excitement at the prospect of a new day of sunlight and parents smiling and maybe bacon cooking on the stove and happiness everywhere.

But that wasn’t how it would be. When Lila’s eyes opened in a hung-over daze she’d look into the features of a gray-haired man she wouldn’t even remember—someone she met in a bar the previous night. Her nausea and headache might produce some remorse and self-contempt but not much, he thought—she’d been through this many times—and she’d slowly try to figure out how to return to whatever life she’d been leading before she met this one.

Her voice murmured something like “Look out!” Then she said something unintelligible and turned away, then pulled the blanket up around her head, perhaps against the cold breeze that came down through the open hatch. The berth of the sailboat was so narrow that this turn of her body brought her up against him again and he felt the whole length of her and then her warmth. An earlier lust came back and his arm went over her so that his hand held her breast—full there but too soft, like something overripe that would soon go bad.

He wanted to wake her and take her again but as he thought about this a sad feeling rose up and forbade it. The more he hesitated the more the sadness grew. He would like to know her better. He’d had a feeling all night that he had seen her before somewhere, a long time ago.

That thought seemed to bring it all down. Now the sadness came on in full and blended with the darkness of the cabin and with the dim indigo light through the hatch above. Up there were stars, framed by the hatch opening so that they seemed to move when the boat rocked. Part of Orion momentarily disappeared, then appeared again. Soon all the winter constellations would be back.

Cars rolling over a bridge in the distance sounded clearly through the cold night air. They were on their way to Kingston, somewhere on the bluffs above, over the Hudson River. The boat was berthed here in this tiny creek for a night’s rest on the way south.

There was not much time. There was almost no green left in the trees along the river. Many of the turned leaves had already fallen. During these last few days, gusts of cold wind had swept down the river valley from the north, swirling the leaves up off their branches into the air in sudden spiraling flights of red and maroon and gold and brown across the water of the river into the path of the boat as it moved down the buoyed channel. There had been hardly any other boats in the channel. A few boats at docks along the riverbank seemed abandoned and forlorn now that summer had ended and their owners had turned to other pursuits. Overhead the V’s of ducks and geese had been everywhere, flying down on the north wind from the Canadian arctic. Many of them must have been just ducklings and goslings when he first began this voyage from the inland ocean of Lake Superior, a thousand miles behind him now and what seemed like a thousand years ago.

There was not much time. Yesterday when he first went up on deck his foot slipped and he caught himself and then he saw the entire boat was covered with ice.

Phædrus wondered where he had seen Lila before, but he didn’t know. It seemed as though he had seen her, though. It was autumn then too, he thought, November, and it was very cold. He remembered the streetcar was almost empty except for him and the motorman and the conductor and Lila and her girlfriend sitting back three seats behind him. The seats were yellow woven rattan, hard and tough, designed for years of wear, and then a few years later the buses replaced them and the tracks and overhead cables and the streetcars were all gone.

He remembered he had seen three movies in a row and smoked too many cigarettes and had a bad headache and it was still about half an hour of pounding along the tracks before the streetcar would let him off and then he would have a block and a half through the dark to get home where there would be some aspirin and it would be about an hour and a half after that before the headache would go away. Then he heard these two girls giggle very loudly and he turned to see what it was. They stopped very suddenly and they looked at him in such a way that there could have been only one thing they were giggling at. It was him. He had a big nose and poor posture and wasn’t anything to look at, and tended to relate poorly to other people. The one on the left who looked like she had been giggling the loudest was Lila. The same face, exactly—gold hair and smooth complexion and blue eyes—with a smothered smile she probably thought covered up what she was laughing at. They got off a couple of blocks later, still talking and laughing.

A few months later he saw her again in a downtown rush-hour crowd. It happened in a moment and then it was over. She turned her head and he saw in her face that she recognized him and she seemed to pause, waiting for him to do something, say something. But he didn’t act. He didn’t have that skill of relating quickly to people, and then it was too late, somehow, and they each went on and he wondered for a long time that afternoon, and for days after that, who she was and what it would have been like if he had gone over and said something. The next summer he thought he saw her at a bathing beach in the south part of the city. She was lying in the sand so that when he walked past her he saw her face upside down and he was suddenly very excited. This time he wouldn’t just stand there. This time he would act, and he worked up his courage and went back and stood in the sand at her feet and then saw that the right-side-up face wasn’t Lila. It was someone else. He remembered how sad that was. He didn’t have anybody in those days.

But that was so long ago—years and years ago. She would have changed. There was no chance that this was the same person. And he didn’t know her anyway. What difference did it make? Why should he remember such an insignificant incident like that all these years?

These half-forgotten images are strange, he thought, like dreams. This sleeping Lila whom he had just met tonight was someone else too. Or not someone else exactly, but someone less specific, less individual. There is Lila, this single private person who slept beside him now, who was born and now lived and tossed in her dreams and will soon enough die and then there is someone else—call her lila—who is immortal, who inhabits Lila for a while and then moves on. The sleeping Lila he had just met tonight. But the waking Lila, who never sleeps, had been watching him and he had been watching her for a long time.

It was so strange. All the time he had been coming down the canal through lock after lock she had been making the same journey but he didn’t know she was there. Maybe he had seen her in the locks at Troy, looked right at her in the dark but had not seen her. His chart had shown a series of locks close together but they didn’t show altitude and they didn’t show how confusing things could get when distances have been miscalculated and you are running late and are exhausted. It wasn’t until he was actually in the locks that danger was apparent as he tried to sort out green lights and red lights and white lights and lights of locktenders’ houses and lights of other boats coming the other way and lights of bridges and abutments and God knows what else was out there in that black that he didn’t want to hit in the middle of the darkness or go aground either. He’d never seen them before and it was a tense experience, and it was amidst all this tension that he seemed to remember seeing her on another boat.

Robert Pirsig was born in 1928 in Minneapolis, Minnesota. He held degrees in chemistry, philosophy, and journalism and also studied at Benares Hindu University in India. He was the author of the classic Zen and the Art of Motorcycle Maintenance and its sequel, Lila. He died in 2017.

An Inquiry Into Morals 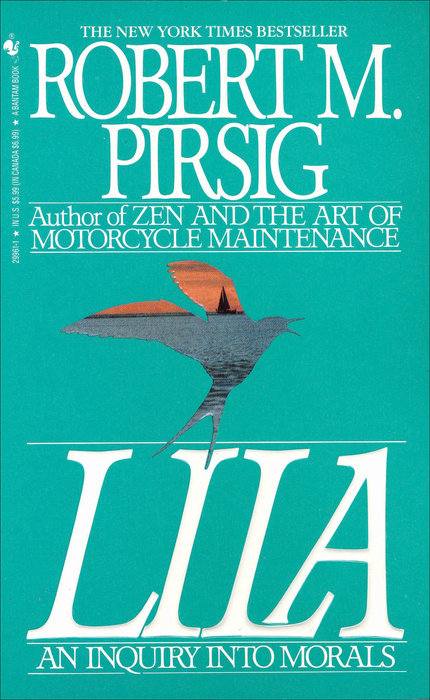