The extraordinary life of Jackie Robinson is illuminated as never before in this full-scale biography by Arnold Rampersad, who was chosen by Jack's widow, Rachel, to tell her husband's story, and was given unprecedented access to his private papers. We are brought closer than we have ever been to the great ballplayer, a man of courage and quality who became a pivotal figure in the areas of race and civil rights.

Born in the rural South, the son of a sharecropper, Robinson was reared in southern California. We see him blossom there as a student-athlete as he struggled against poverty and racism to uphold the beliefs instilled in him by his mother--faith in family, education, America, and God.

We follow Robinson through World War II, when, in the first wave of racial integration in the armed forces, he was commissioned as an officer, then court-martialed after refusing to move to the back of a bus. After he plays in the Negro National League, we watch the opening of an all-American drama as, late in 1945, Branch Rickey of the Brooklyn Dodgers recognized Jack as the right player to break baseball's color barrier--and the game was forever changed.

Jack's never-before-published letters open up his relationship with his family, especially his wife, Rachel, whom he married just as his perilous venture of integrating baseball began. Her memories are a major resource of the narrative as we learn about the severe harassment Robinson endured from teammates and opponents alike; about death threats and exclusion; about joy and remarkable success. We watch his courageous response to abuse, first as a stoic endurer, then as a fighter who epitomized courage and defiance.

We see his growing friendship with white players like Pee Wee Reese and the black teammates who followed in his footsteps, and his embrace by Brooklyn's fans. We follow his blazing career: 1947, Rookie of the Year; 1949, Most Valuable Player; six pennants in ten seasons, and 1962, induction into the Hall of Fame.

But sports were merely one aspect of his life. We see his business ventures, his leading role in the community, his early support of Martin Luther King Jr., his commitment to the civil rights movement at a crucial stage in its evolution; his controversial associations with Eisenhower, Kennedy, Nixon, Humphrey, Goldwater, Nelson Rockefeller, and Malcolm X.

Rampersad's magnificent biography leaves us with an indelible image of a principled man who was passionate in his loyalties and opinions: a baseball player who could focus a crowd's attention as no one before or since; an activist at the crossroads of his people's struggle; a dedicated family man whose last years were plagued by illness and tragedy, and who died prematurely at fifty-two. He was a pathfinder, an American hero, and he now has the biography he deserves.

An excerpt from Jackie Robinson

On the morning of Monday, July 23, 1962, in the pretty and historic village of Cooperstown in upstate New York, a young white man awoke nervously in the darkness just before dawn, dressed himself quickly, and was out of his hotel, the Cooper Inn, just after six o’clock. The previous evening, he had left his home in Brooklyn, boarded a bus at the Port Authority terminal in Manhattan, and traveled some seven hours through the gathering darkness to be in Cooperstown in good time to witness the events of this day. Outside his hotel, he found the air more than a shade nippy for a midsummer morning; the sky, heavy and sodden with moisture, hung in thick shrouds that hid the sun. This was poor weather for the events he had come such a long distance to see. Later that morning, at tenthirty, the Baseball Hall of Fame would induct four men into its ranks. Then, at two o’clock in the afternoon, two teams, the New York Yankees and the Milwaukee Braves, would meet in a memorial game played annually near the spot where—all facts to the contrary—baseball was said to have been invented by Abner Doubleday in a cow pasture in 1839, when the nation was young.

By seven o’clock, hours before the ceremony, the young man, Ron Gabriel, twenty-one years old and on summer vacation from his university, had eagerly claimed a seat in the front row of some two thousand chairs set out on Main Street before the official rostrum. This wooden dais stood on the lawn in front of the brick building, rich in baseball memorabilia, that housed the museum that was the Baseball Hall of Fame. Neither the chilly air nor the menace of rain could temper Gabriel’s excitement: “I wanted to see everything!” Born and reared in the Flatbush section of Brooklyn, Gabriel had come above all to witness one event: the induction of Jack Roosevelt “Jackie” Robinson into the Hall of Fame. Since his days as a boy haunting Ebbets Field, the aged ballpark that the Brooklyn Dodgers called home, Gabriel had admired Robinson. But his interest in the ceremony ran deeper. Four years before, in 1958, the Dodgers had quit Brooklyn and moved to Los Angeles. Soon, to make way for an apartment complex, a wrecking ball had reduced Ebbets Field to rubble.

To Gabriel, as to his parents and thousands of other fans, Brooklyn and its old, sweet ways had begun to die the day the Dodgers left. Gabriel’s grandparents had come to the United States from Russia and Austria, in the long river of migration that had brought millions of foreigners to New York. Almost as much as any other single force, the Brooklyn Dodgers had helped to make the children and grandchildren of many of these migrants truly American. With the departure of the Dodgers, that vision of old Brooklyn would live thereafter mainly in memory and legend, and most vividly in thrilling recollections of the baseball team of which Jackie Robinson, between 1947 and 1956, had been one unforgettable part.

When the ceremony at last started, every seat before the rostrum was taken, and all eyes were on the four men being inducted. Two were oldtimers, chosen by a special committee: Edd Roush, sixty-eight years old and, in the seasons just before the ascendancy of Babe Ruth and the mighty home run, one of the premier hitters in the game; and Bill McKechnie, seventy-six, mediocre as a player but a paragon among managers. The other two inductees were stars of the recent past, selected by a far more exacting process. One was Bob Feller, forty-three, a flame-throwing pitcher from an Iowa farm whose 266 wins included three no-hitters and a dozen onehitters. He had been, as one reporter put it, “supreme, a model athlete cast in the heroic mold, as a boy wonder who became a national sports idol.” The other was Robinson, also forty-three years old. Robinson’s complex fate had been to be the first black player in the major leagues of baseball in America in the twentieth century.

For all four men, as for virtually all baseball players, entry into the Hall of Fame was the crowning achievement of their lives. The white-haired McKechnie, breaking down at the podium, could not finish his remarks. More poised, Robinson was also deeply moved by the significance of the moment. “What I remember above all,” Gabriel recalled, “was how absolutely radiant he looked. He wore a dark suit and a dark tie and his skin was very dark, too. But his hair was thick and a glowing white and his eyes were sparkling because he was obviously very proud and very, very happy.” When it was his turn to speak, he did not hide his joy. “I feel inadequate,” he confessed. “I can only say that now everything is complete.”

Quickly, Robinson turned to include others in his moment of triumph. “I could not be here without the advice and guidance of three of the most wonderful people I know,” he declared. One was a bulky, bushy-browed white man, Branch Rickey, eighty years old, “who was as a father to me.” In 1945, as general manager of the Dodgers, Rickey had made up his mind to attack Jim Crow in baseball, and with many men to choose from in the Negro baseball leagues had summoned a rookie shortstop on the Kansas City Monarchs to walk point. The second was Robinson’s mother, Mallie McGriff Robinson, seventy-one. Once a sharecropper’s wife in rural Georgia, then a domestic servant in California, to which she had fled in 1920, she had also been the single most influential person in her son’s often troubled youth, urging him on toward a clean, God-fearing life and whatever success he could wrestle for himself in a world hostile to blacks. The third was his wife, Rachel Robinson, whom he had married in 1946, just as his baseball ordeal was beginning, and who had shared with him most of the grief and the glory of the years since then. These three people “are all here today,” Robinson said, “making the honor complete. And I don’t think I will ever come down from Cloud Nine.”

In January, five years after retiring, when he had become eligible for the Hall of Fame following a rule instituted in 1954, he had expected to be ignored. That month, according to a secret ritual, 160 members of the Baseball Writers’ Association of America had each nominated ten eligible players for the Hall of Fame. (A separate, smaller committee chose from among old-timers, executives, and the like.) To enter the Hall, a player first had to appear on 75 percent of these ballots. The standards for nomination were in part subjective; the writers were often unpredictable. In the history of the Hall, no one had entered in his first year of eligibility since its opening in 1936, when the selectors tapped five immortals: Ty Cobb, Babe Ruth, Walter Johnson, Honus Wagner, and Christy Mathewson. In 1939, his last season, Lou Gehrig had entered by acclamation, because everyone knew that the “Iron Horse” of baseball was dying. But Rogers Hornsby, said to be the finest right-handed hitter ever, had waited six years; and Joe DiMaggio, lauded by Robinson himself as the finest player of their era, had waited two. Since 1956, the writers had not chosen any players.

Judged by the statistics of his career, Robinson’s chances were strong but not overwhelming; judged by the many controversies of a career born in raw controversy, they were slim. Robinson himself thought he had no chance. “I’m positive I won’t be accepted this year,” he had told a reporter. “Maybe someday. But regardless of what some of my achievements were, many writers are going to disregard this because of Jackie Robinson, Negro outspoken.”

Arnold Rampersad, the Sarah Hart Kimball Professor Emeritus in the Humanities at Stanford University, has also taught at Princeton, Columbia, and Rutgers Universities. His books include The Life of Langston Hughes (two volumes); biographies of W. E. B. Du Bois, Jackie Robinson, and Ralph Ellison; and, with Arthur Ashe, Days of Grace: A Memoir. Among his numerous awards and honors are a MacArthur Foundation fellowship in 1991 and the National Humanities Medal, presented at the White House in 2011. 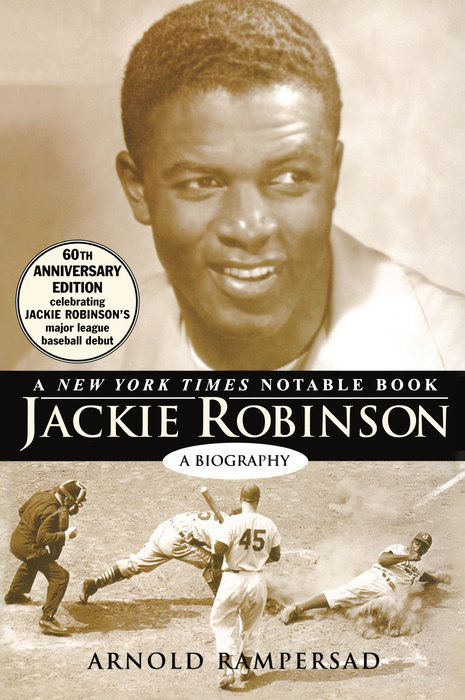