NEW YORK TIMES BESTSELLER • For the infamous, power-hungry Sith, beholden to the dark side, the time has come to rise again.

“Full of lightsaber battles, the Jedi philosophy, and lots of new life-forms.”—Chicago Sun-Times

After years of waiting in the shadows, Darth Sidious is taking the first step in his master plan to bring the Republic to its knees. Key to his scheme are the Neimoidians of the Trade Federation. Then one of his Neimoidian contacts disappears, and Sidious does not need his Force-honed instincts to suspect betrayal. He orders his apprentice, Darth Maul, to hunt the traitor down.

But he is too late. The secret has already passed into the hands of information broker Lorn Pavan, which places him right at the top of Darth Maul’s hit list. Then, in the labyrinthine alleyways and sewers of Coruscant, capital city of the Republic, Lorn crosses paths with Darsha Assant, a Jedi Padawan on a mission to earn her Knighthood.

Now the future of the Republic depends on Darsha and Lorn. But how can an untried Jedi and an ordinary man, stranger to the powerful ways of the Force, hope to triumph over one of the deadliest killers in the galaxy?

Space is the perfect place to hide.

The Neimoidian freighter Saak’ak cruised ponderously in the uncharted deeps of Wild Space. It displayed its colors proudly, its cloaking device disabled, with no fear of detection. Here, parsecs away from the civilized Galactic Core and its surrounding systems, it could safely hide in plain sight. Even the Neimoidians, those past masters of paranoia, felt secure in the vast endless abyss between the disk and one of the spiral arms.

Yet even here the leaders of the Trade Federation could not entirely let go of their natural tendency toward subterfuge. They sought duplicity and guile the way a young grub seeks the safety and warmth of its sleeping niche in the communal hive. The Saak’ak was a good example of this. It was, to all appearances, merely a commercial vessel, its horseshoe shape designed to carry large amounts of cargo. Not until an unwary enemy had come within firing range would the heavy durasteel armor plating, blaster turrets, and military-strength communications arrays become visible.

By which time, of course, it would be too late.

Aboard the Saak’ak’s bridge all was silent save for the muted beeps and chimes of various life-support monitors and the almost inaudible susurrus of the air filtration system. Three figures stood to one side of the huge transparisteel viewport. They wore the flowing robes and mantles of the Neimoidian aristocracy, but their body language, as a fourth figure appeared in their midst, was deferential, if not outright cringing and servile.

The fourth figure was not really there with them in any physical sense. The robed and hooded form was a holograph, a three-dimensional image projected from an unknown source light-years distant. Intangible and immaterial, the mysterious stooped image nevertheless dominated the three Neimoidians. Indeed, they could not have been any more thoroughly cowed had he been physically present with a blaster in each hand.

The figure’s face—what little was visible of it in the shadows of the hood—was grim and unforgiving. The cowled head moved slightly as he looked at each of the Neimoidians in turn. Then the figure spoke, his voice a dry rasp, his tone that of one accustomed to instant obedience.

“There are only three of you.”

The tallest of the three, the one wearing the triple-crested tiara of a viceroy, responded in a stammering voice. “Th-that is true, Lord Sidious.”

“I see you, Gunray, and your lackeys Haako and Dofine. Where is the fourth one? Where is Monchar?”

Federation Viceroy Nute Gunray clasped his hands in front of him in what was not so much a supplicating gesture as an attempt to keep them from nervously wringing each other. He had hoped he would grow used to dealing with the Sith Lord over time, but so far that had not happened. If anything, these meetings with Darth Sidious had become even more gut-twisting and upsetting as the deadline for the embargo grew ever closer. Gunray did not know how his seconds in command, Daultay Dofine and Rune Haako, felt—discussing one’s feelings was anathema in Neimoidian society—but he knew how he felt after each encounter with the Sith Lord. He felt like squirming back into his hive mother’s birth chamber and pulling the cloacal flap in after him.

Especially now. Curse Hath Monchar! Where was the misbegotten rankweed sucker? Not on board the Saak’ak, that much was certain. The ship had been searched from the center sphere to the air locks at the outmost ends of each docking bay arm. Not only was his deputy viceroy nowhere to be found, but a scout vessel with hyperdrive capability was missing, as well. Put these two facts together, and the chances of Viceroy Gunray winding up as fodder for one of the fungus farms back on Neimoidia was beginning to look distressingly good.

The holographic image of Darth Sidious flickered slightly, then regained its none-too-stable resolution. A glitch, most likely caused by some solar flare on a star between here and whatever mysterious world the signal was originating from. Not for the first time Gunray found himself wondering on what world or ship the real Sith was standing, and not for the first time he flinched hastily away from the thought. He didn’t want to know too much about the Neimoidians’ ally in this undertaking. In fact, he wished he could forget what little he already knew. Collaborating with Darth Sidious was about as safe as being trapped in a cave on Tatooine with a hungry krayt dragon.

The hooded face turned to glare directly at him. “Well?” Sidious demanded.

Even as he opened his mouth, Gunray knew that it would be futile to lie. The Sith Lord was a master of the Force, that mysterious and pervasive energy field that, some said, knitted the galaxy together just as surely as did gravity. Sidious might not be able to read another’s inmost thoughts, but he certainly could tell when someone was lying. Even knowing that, however, the Neimoidian could no more stop himself from dissimulating than he could stop his sweat ducts from oozing oily perspiration down the back of his neck.

“He was taken ill, my lord. Too much rich food. He—he has a delicate constitution.” Gunray closed his mouth, keeping his lips firmly pressed together to stop them from trembling. Inwardly he cursed himself. Such a pathetic and obvious prevarication; even a Gamorrean would be able to see through it! He waited for Sidious to command Haako and Dofine to turn on him, to strip him of his vestments and rank. He had no doubt that they would do it. For the Neimoidians, one of the most difficult concepts to understand in the galactic lexicon of Basic was the word loyalty.

However, to his astonishment, Sidious merely nodded instead of showering him with vituperation. “I see. Very well, then—the four of us shall discuss the contingency plans should the trade embargo fail. Monchar can be briefed on them when he recovers.” The Sith Lord continued speaking, describing his plan to hide a large secret army of battle droids in the cargo bays of the trade ships, but Gunray could hardly pay attention to the specifics. He was stunned that his desperate ruse had worked.

The viceroy’s relief was short-lived, however. He knew that at best all he had done was buy some time, and not much of that. When Sidious’s hologram again materialized on the bridge of the Saak’ak he would once more demand to know where Monchar was—and this time he would not accept illness as an excuse.

There were no two ways about it—his errant lieutenant would have to be found, and quickly. But how to do this without arousing Sidious’s suspicions? Gunray felt certain at times that the Sith Lord was somehow able to peer into every compartment, niche, and cubicle on the freighter, that he knew everything, no matter how trivial or inconsequential, that took place on board.

The viceroy silently commanded himself to maintain control. He took advantage of Sidious’s attention being momentarily focused on Haako and Dofine to surreptitiously slip an antistress capsule between his lips. He could feel his lung pods expanding and contracting convulsively within him, on the verge of hyperventilation. An old saying characterized Neimoidians as the only sentient species with an entire organ devoted solely to the task of worrying. As Nute Gunray felt the anxiety that had been momentarily quelled threatening to build up once more in his gut sac, the adage did seem to have an unpleasant ring of truth to it.

Darth Sidious, Master of the Sith, finished relaying his instructions to the Neimoidians and made a slight, almost negligent gesture. Across the room a relay clicked and the holographic transmission ended. The flickering blue-white images of the Neimoidians and the section of their ship’s bridge captured by the split-beam transceivers vanished.

Sidious stood motionless and silent on the transmission grid, his fingers steepled, his mind meditating on the eddies and currents of the Force. Those of lesser sensitivity were oblivious to it, but to him it was like an omnipresent mist, invisible but nonetheless tangible, that swirled and drifted constantly about him. No words, no descriptions could begin to convey what it was like; the only way to understand it was to experience it.

He had learned over long years of study and meditation how to interpret each and every vagary of its restless flow, no matter how slight. Even without that ability, however, he would have known that Nute Gunray was lying about Hath Monchar’s whereabouts. An old joke about the viceroy’s kind summed it up nicely:

How can you tell if a Neimoidian is lying?

His mouth is open.

Michael Reaves received an Emmy Award for his work on the Batman television animated series. He has worked for Spielberg’s DreamWorks, among other studios, and has written fantasy novels and supernatural thrillers. Reaves is the New York Times bestselling author of Star Wars: Darth Maul: Shadow Hunter and the first two Star Wars: Coruscant Nights novels Jedi Twilight and Street of Shadows. He is also the co-writer (with Maya Kaathryn Bohnhoff) of the last two Star Wars: Coruscant Nights novels—Patterns of Force and The Last Jedi—and Star Wars: Shadow Games, as well as (with Steve Perry) Star Wars: Death Star and the Star Wars: MedStar novels Battle Surgeons and Jedi Healer. He lives in the Los Angeles area. 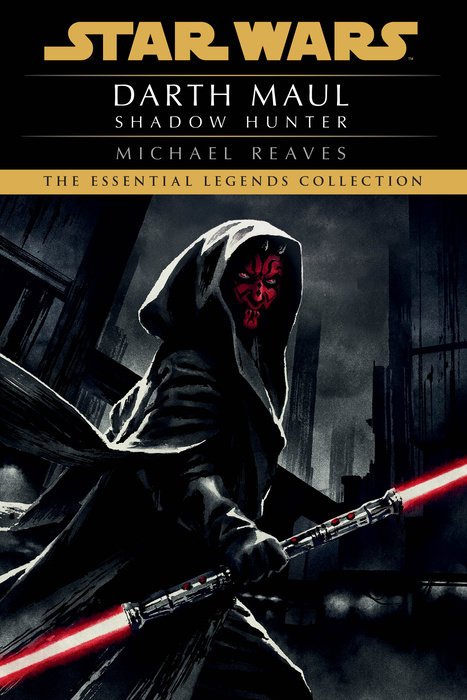