Considered by many the greatest war novel of all time, All Quiet on the Western Front is Erich Maria Remarque’s masterpiece of the German experience during World War I.

I am young, I am twenty years old; yet I know nothing of life but despair, death, fear, and fatuous superficiality cast over an abyss of sorrow. . . .

This is the testament of Paul Bäumer, who enlists with his classmates in the German army during World War I. They become soldiers with youthful enthusiasm. But the world of duty, culture, and progress they had been taught breaks in pieces under the first bombardment in the trenches.

Through years of vivid horror, Paul holds fast to a single vow: to fight against the principle of hate that meaninglessly pits young men of the same generation but different uniforms against one another . . .  if only he can come out of the war alive.

“The world has a great writer in Erich Maria Remarque. He is a craftsman of unquestionably first rank, a man who can bend language to his will. Whether he writes of men or of inanimate nature, his touch is sensitive, firm, and sure.”—The New York Times Book Review

An excerpt from All Quiet on the Western Front

For some years after the end of the First World War the memoirs of generals and statesmen dominated publication about it – none more prominently than Churchill’s great classic, The World Crisis (1923). Then, quite suddenly, ten years down the line, came the other side, the horror, the view from below. The British had lost almost a million men dead, the French over a million, and the Germans nearly two, mainly on the Western Front, where thousands of guns churned up the mud. War cripples hobbled the streets of Berlin, and are recorded in the bitter Twenties paintings of Georg Grosz and Otto Dix. Writers followed – in Great Britain, amongst the earliest books were Richard Aldington’s novel Death of a Hero (1929) and Robert Graves’s memoir Goodbye to All That (1929), the most famous of them all. I was given it as a Christmas present when I was fifteen and read it at a session. At the time, the mid- Fifties, there were men around, not even sixty, who had gone through the Western Front but you could never get them to talk about it. British critics did not attack ‘the system’, they tended to dwell on the incompetence of the generals. The French had a rather similar experience, in that the from-below story of 1914-18 surfaced with Louis-Ferdinand Celine’s Voyage au bout de la nuit (1932), which is brilliant black farce. Celine, who had volunteered in 1912, entered the War with the usual young man’s patriotism, and was badly maimed at an early stage; and he made a mockery of the whole business. But there is not really any French, let alone British or American, equivalent of the bitterness and edge that went into the paintings of Dix and Grosz. Two films come the closest – Oh! What a Lovely War (1969) which started off as a musical (1963) by Joan Littlewood based on the songs of the poor bloody infantry, and Stanley Kubrick’s Paths of Glory (1957). On the literary side, the German Erich Maria Remarque’s All Quiet on the Western Front (1929) is in a class of its own. It appeared not long before the Wall Street Crash started a process that was soon to give Germany eight million unemployed, and the Chancellorship  of Adolf Hitler. Not just the Nazis banned it; so did the Lord Mayor of Cologne, Konrad Adenauer, a Centre Party Catholic and later first Chancellor of West Germany. Official Germany would not accept any responsibility for the War. In 1923 the legal scholar Hermann Kantorowicz put in a memorandum to the Reichstag ‘War Guilt’ committee, showing that three quarters of the published documents from 1914 were false, and even the ‘good German’ Gustav Stresemann tried to stop him from getting a Chair, and suppressed the report.

This is all understandable, because Germany did face a war indemnity, ‘reparations’, designed to cripple her for two generations, and to suggest that she had caused the War counted as treachery. But so did criticism of the army (and the fourteen-volume official history, besides being incomplete, was almost free of it). Exposing the reality was left to a writer such as Remarque.

For Germans the War had ended in defeat and disillusion. It had been a four-year epic of sacrifice, and there had been spectacular successes, from the capture of Russian Poland in 1915 through Caporetto in 1917, when the Italian front imploded, to the March Offensive of 1918, which destroyed the British Fifth Army. German generals had a panache lacking on the Allied side, almost to the end, and it is notable in All Quiet on the Western Front that there is very little criticism or mockery of generals, let alone officers, who come off well – understanding and humane. The Germans shot far fewer of their own men than did the British. When the armistice happened, attempts were made to imitate the Russian Revolution in which Soldiers’ Councils had challenged the authority of their officers. Far from being revolutionary, the German Soldiers’ Councils voted for Generalfeldmarschall von Hindenburg to be their overall president (he declined). Even so, some 25,000 German prisoners of war did join the Red Army. The end of the War saw bitter political recriminations: the Left blamed the Right for starting it, and the Right blamed the Left for stopping it, for giving the fighting troops a ‘stab in the back’. This civil war was always latent in the Weimar Republic, and it flared up again when the Wall Street Crash ended properly democratic government (in 1930: thereafter governments ruled by emergency decree). The civil war culminated in the victory, in 1933, of the Nazis. It also resulted in the emigration of Erich Maria Remarque. All Quiet was one of the Nazis’ burned books.

Remarque was not a Communist or even, it seems, anything much. He was born (1898) into a skilled working-class family in Osnabruck, his father a printer, and attended Catholic schools. When he turned eighteen, in 1916, he was conscripted, and after some basic training (All Quiet is biting about that; the sadistic Corporal Himmelstoss is an archetype of military memoirs, where bright young men encounter maniacal and petty disciplinarians) he was drafted to Flanders. The British Offensive – we know it as Passchendaele, from the village the capture of which, after 400,000 casualties, allowed victory to be absurdly declared – was about to start, and Remarque was badly wounded on its first day, 31 July 1917, spending much of the rest of the War in hospital. He kept a notebook and recorded the men’s stories as he heard them. They form the basis for All Quiet.

The wiseacres hated the book, seeing it as an insult to the German army, and the Nazis put it about that Remarque – originally ‘Remark’ (he gave it a French twist: his forebears had been Remarques from across the border) – had in reverse been ‘Kramer’, a Jewish name meaning ‘pedlar’. They also made much of the fact that Remarque had not served in the front line. The irony was that Hitler himself, though he had two medals, did not really have a heroic war. We know from some extraordinary research by Thomas Weber (Hitler’s First War, 2010) that he was not a front-line soldier but a messenger who spent most of his time at headquarters – what other men called an Etappenschwein (‘rear-area pig’). In the British army it was called having a cushy job. Regimental colonels were sent bags of medals from time to time, for distribution, and Hitler got two of them because he was conveniently there, according to his own account, reading Schopenhauer from a pocketbook. Half of the veterans from his regiment, Bavarian Catholics,
refused to turn up when called upon to attend a reunion in 1934 to celebrate the victory of their alleged fellow-soldier, now Fuhrer. Remarque had already left Germany the day after Hitler became Chancellor in January 1933. He had easily enough money from royalties to live in Switzerland, and later in Hollywood and New York. He never lived in Germany again. The Nazis, in time, chased his poor sister, Elfriede Scholz, a dressmaker in Dresden. She was denounced by her landlady and a customer in 1943 for saying the war was lost, as indeed it was. An example was made of her, for Wehrkraftzersetzung (roughly, ‘demoralizing the armed forces’) and she was beheaded. After World War II Remarque remained in the USA, quite successful, though always best-known for All Quiet. In the 1950s he married the American actress Paulette Goddard, moved back to Switzerland, and died there in 1970. But All Quiet lives on, and deserves to.

ERICH MARIA REMARQUE was born in Germany in 1898 and drafted into the German army during World War I. His novel All Quiet on the Western Front was published in 1928 and was an instant best seller. When the Nazis came to power, Remarque left Germany for Switzerland; he lost his German citizenship, his books were burned, and his films banned. He went to the United States in 1938 and became a citizen in 1947. He later lived in Switzerland with his second wife, the actress Paulette Goddard. He died in September 1970. 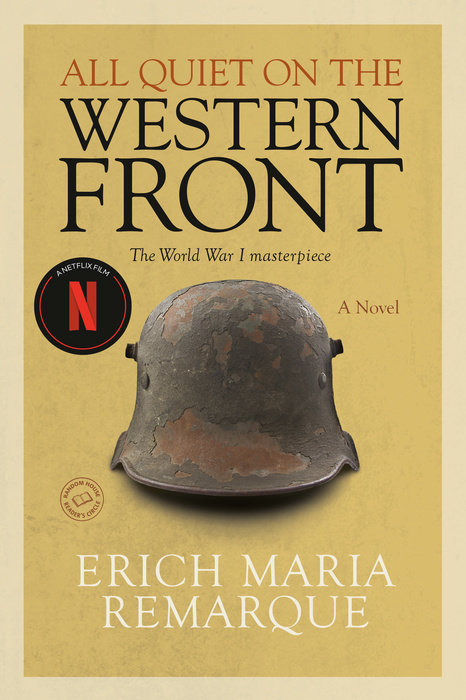