Winner of the Hugo Award for Best Novel • One of the most enthralling science fiction sagas ever written, Kim Stanley Robinson’s epic trilogy concludes with Blue Mars—a triumph of prodigious research and visionary storytelling.

The red planet is no more. Now green and verdant, Mars has been dramatically altered from a desolate world into one where humans can flourish. The First Hundred settlers are being pulled into a fierce new struggle between the Reds, a group devoted to preserving Mars in its desert state, and the Green “terraformers.” Meanwhile, Earth is in peril. A great flood threatens an already overcrowded and polluted planet. With Mars the last hope for the human race, the inhabitants of the red planet are heading toward a population explosion—or interplanetary war.

An excerpt from Blue Mars

At a certain moment before dawn the sky always glowed the same bands of pink as in the beginning, pale and clear in the east, rich and starry in the west. Ann watched for this moment as her companions drove them west, toward a mass of black land rearing into the sky—the Tharsis Bulge, punctuated by the broad cone of Pavonis Mons. As they rolled uphill from Noctis Labyrinthus they rose above most of the new atmosphere; the air pressure at the foot of Pavonis was only 180 millibars, and then as they drove up the eastern flank of the great shield volcano it dropped under 100 millibars, and continued to fall. Slowly they ascended above all visible foliage, crunching over dirty patches of wind-carved snow; then they ascended above even the snow, until there was nothing but rock, and the ceaseless thin cold winds of the jet stream. The bare land looked just as it had in the prehuman years, as if they were driving back up into the past. It wasn't so. But something fundamental in Ann Caybome warmed at the sight of this ferric world, stone on rock in the perpetual wind, and as the Red cars rolled up the mountain all their occupants grew as rapt as Ann, the cabins falling silent as the sun cracked the distant horizon behind them.

Then the slope they ascended grew less steep, in a perfect sine curve, until they were on the flat land of the round summit plateau. Here they saw tent towns ringing the edge of the giant caldera, clustered in particular around the foot of the space elevator, some thirty kilometers to the south of them.

They stopped their cars. The silence in the cabins had shifted from reverent to grim. Ann stood at one upper-cabin window, looking south to Sheffield, that child of the space elevator: built because of the elevator, smashed flat when the elevator fell, built again with the elevator's replacement. This was the city she had come to destroy, as thoroughly as Rome had Carthage; for she meant to bring down the replacement cable too, just as they had the first one in 2061. When they did that, much of Sheffield would again be flattened. What remained would be located uselessly on the peak of a high volcano, above most of the atmosphere; as time passed the surviving structures would be abandoned and dismantled for salvage, leaving only the tent foundations, and perhaps a weather station, and, eventually, the long sunny silence of a mountain summit. The salt was already in the ground.

A cheerful Tharsis Red named Irishka joined them in a small rover, and led them through the maze of warehouses and small tents surrounding the intersection of the equatorial piste with the one circling the rim. As they followed her she described for them the local situation. Most of Sheffield and the rest of the Pavonis rim settlements were already in the hands of the Martian revolutionaries. But the space elevator and the neighborhood surrounding its base complex were not, and there lay the difficulty. The revolutionary forces on Pavonis were mostly poorly equipped militias, and they did not necessarily share the same agenda. That they had succeeded as far as they had was due to many factors: surprise, the control of Martian space, several strategic victories, the support of great majority of the Martian population, the unwillingness of the United Nations Transitional Authority to fire on civilians, even when they were making mass demonstrations in the streets. As a result the UNTA security forces had retreated from all over Mars to regroup in Sheffield, and now most of them were in elevator cars, going up to Clarke, the ballast asteroid and space station at the top of the elevator; the rest were jammed into the neighborhood surrounding the elevator's massive base complex, called the Socket. This district consisted of elevator support facilities, industrial warehouses, and the hostels, dormitories, and restaurants needed to house and feed the port's workforce. "Those are coming in useful now," Irishka said, "because even though they're squeezed in like trash in a compactor, and if there hadn't been food and shelter they would probably have tried a breakout. As it is things are still tense, but at least they can live."

It somewhat resembled the situation just resolved in Burroughs, Ann thought. Which had turned out fine. It only took someone willing to act and the thing would be done—UNTA evacuated to Earth, the cable brought down, Mars's link to Earth truly broken. And any attempt to erect a new cable could be balked sometime in the ten years of orbital construction that it took to build one.

So Irishka led them through the jumble that was east Pavonis, and their little caravan came to the rim of the caldera, where they parked their rovers. To the south on the western edge of Sheffield they could just make out the elevator cable, a line that was barely visible, and then only for a few kilometers out of its 24,000. Nearly invisible, in fact, and yet its existence dominated every move they made, every discussion—every thought they had, almost, speared and strung out on that black thread connecting them to Earth. 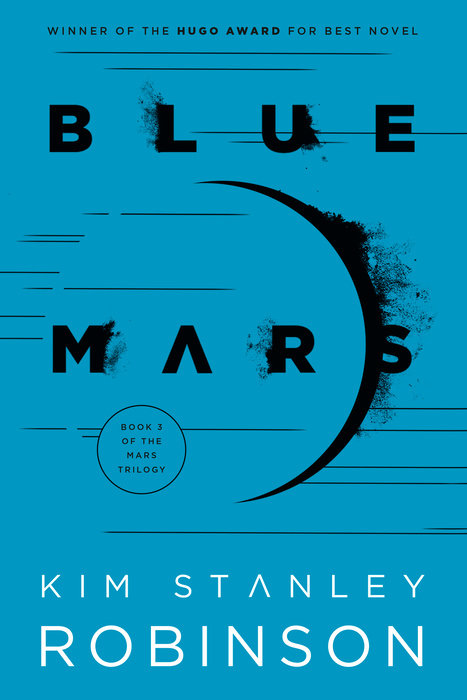