Winner of the Hugo Award for Best Novel • Kim Stanley Robinson’s classic trilogy depicting the colonization of Mars continues in a thrilling and timeless novel that pits the settlers against their greatest foes: themselves.

“One of the major sagas of the [latest] generation in science fiction.”—Chicago Sun-Times

Nearly a generation has passed since the first pioneers landed on Mars, and its transformation to an Earthlike planet is under way. But not everyone wants to see the process through. The methods are opposed by those determined to preserve their home planet’s hostile, barren beauty. Led by the first generation of children born on Mars, these rebels are soon joined by a handful of the original settlers. Against this cosmic backdrop, passions, partnerships, and rivalries explode in a story as spectacular as the planet itself.

An excerpt from Green Mars

The point is not to make another Earth. Not another Alaska or Tibet, not a Vermont nor a Venice, not even an Antarctica. The point is to make something new and strange, something Martian.

In a sense our intentions don't even matter. Even if we try to make another Siberia or Sahara, it won't work. Evolution won't allow it, and at its heart this is an evolutionary process, an endeavor driven at a level below intention, as when life made its first miracle leap out of matter, or when it crawled out of sea onto land.

Again we struggle in the matrix of a new world, this time truly alien. Despite the great long glaciers left by the giant floods of 2061, it is a very arid world; despite the beginnings of atmosphere creation, the air is still very thin; despite all the applications of heat, the average temperature is still well below freezing. All these conditions make survival for living things difficult in the extreme. But life is tough and adaptable, it is the green force viriditas, pushing into the universe. In the decade following the catastrophes of 2061, people struggled in the cracked domes and torn tents, patching things up and getting by; and in our hidden refuges, the work of building a new society went on. And out on the cold surface new plants spread over the flanks of the glaciers, and down into the warm low basins, in a slow inexorable surge.

Of course all the genetic templates for our new biota are Terran; the minds designing them are Terran; but the terrain is Martian. And terrain is a powerful genetic engineer, determining what flourishes and what doesn't, pushing along progressive differentiation, and thus the evolution of new species. And as the generations pass, all the members of a biosphere evolve together, adapting to their terrain in a complex communal response, a creative self-designing. ability. This process, no matter how much we intervene in it, is essentially out of our control. Genes mutate, creatures evolve: a new biosphere emerges, and with it anew noosphere. And eventually the designers' minds, along with everything else, have been forever changed.

This is the process of areoformation.


One day the sky fell. Plates of ice crashed into the lake, and then started thumping on the beach. The children scattered like frightened sandpipers. Nirgal tan over the dunes to the village and burst into the greenhouse, shouting, "The sky is falling, the sky is falling!" Peter sprinted out the doors and across the dunes faster than Nirgal could follow.

Back on the beach great panes of ice stabbed the sand, and some chunks of dry ice fizzed in the water of the lake. When the children were all clumped around him Peter stood with his head craned back, staring at the dome so far above. "Back to the village,” he said in his no-nonsense tone. On the way there he laughed. "The sky is falling!" he squeaked, tousling Nirgal's hair. Nirgal blush and Dao and Jackie laughed, their frosted breath shooting out in quick white plumes.

Peter was one of those who climbed the side of the dome to repair it. He and Kasei and Michel spidered over the village in sight of all, over the beach and then the lake until they were smaller than children, hanging in slings from ropes attached to icehooks. They sprayed the flaw in the dome with water until it froze into a new clear layer, coating the white dry ice. When they came down they talked of the warming world outside. Hiroko had come out of her little bamboo stand by the lake to watch, and Nirgal said to her,

"Will we have to leave?"

"We will always have to leave," Hiroko said. "Nothing on Mars will last."


But Nirgal liked it under the dome. In the morning he woke in his own round bamboo room, high in Creche Crescent, and ran down to the frosty dunes with Jackie and Rachel and Frantz and the other early risers. He saw Hiroko on the far shore, walking the beach like a dancer, floating over her own wet reflection. He wanted to go to her but it was time for school.

They went back to the village and crowded into the schoolhouse coatroom, hanging up their down jackets and standing with their blue hands stretched over the heating grate, waiting for the day's teacher. It could be Dr. Robot and they would be bored senseless, counting his blinks like the seconds on the clock. It could be the Good Witch, old and ugly, and then they would be back outside building all day, exuberant with the joy of tools. Or it could be the Bad Witch, old and beautiful, and they would be stuck before their lecterns all morning trying to think in Russian, in danger of a rap on the hand if they giggled or fell asleep. The Bad Witch had silver hair and a fierce glare and a hooked nose, like the ospreys that lived in the pines by the lake. Nirgal was afraid of her.

So like the others he concealed his dismay as the school door opened and the Bad Witch walked in. But on this day she seemed tired, and let them out on time even though they had done poorly at arithmetic. Nirgal followed Jackie and Dan our of the schoolhouse and around the corner, into the alley between Creche Crescent and the back of the kitchen. Dan peed against the wall and Jackie pulled down her pants to show she could too, and just then the Bad Witch came around the corner. She pulled them all out of the alley by the arm, Nirgal and Jackie clutched together in one of her talons, and right out in the plaza she spanked Jackie while shouting furiously at the boys. "You two stay away from her! She's your sister!" Jackie, crying and twisting to pull up her pants, saw Nirgal looking at her, and she tried to hit him and Maya with the same furious swing, and fell over bare-bottomed and howled.


It wasn't true that Jackie was their sister. There were twelve sansei or third-generation children in Zygote, and they knew e other like brothers and sisters and many of them were, but not all. It was confusing and seldom discussed. Jackie and Dao were oldest, Nirgal a season younger, the rest bunched a season after that: Rachel, Emily, Reull, Steve, Simud, Nanedi, Tiu, Frantz, a Huo Hsing. Hiroko was mother to everyone in Zygote, but not really—only to Nirgal and Dan and six other of the sansei, and several of the nisei grownups as well. Children of the mother goddess.

But Jackie was Esther's daughter. Esther had moved away after a fight with Kasei, who was Jackie's father. Not many of them Irn who their fathers were. Once Nirgal had been crawling over a dune after a crab when Esther and Kasei had loomed overhead, Esther crying and Kasei shooting, "If you're going to leave me then leave!

He had been crying too. He had a pink stone eyetooth. He too had been a child of Hiroko's; so Jackie was Hiroko's granddaughter. That was how it worked. Jackie had long black hair and was the fastest runner in Zygote, except for Peter. Nirgal could run the longe and sometimes ran around the lake three or four times in a to just to do it, but Jackie was faster in the sprints. She laughed all the time, If Nirgal ever argued with her she would say, "All right Uncle Nirgie," and laugh at him. She was his niece, although a season older. But not his sister.


The school door crashed open and there was Coyote, teacher for the day. Coyote traveled all over the world, and spent very little time in Zygote. It was a big day when he taught them. He led the around the village finding odd things to do, but all the time he made one of them read aloud, from books impossible to understand, written by philosophers, who were dead people. Bakunin, Nietzsche, Mao, Bookchin—these people's comprehensible thoughts lay like unexpected pebbles on a long beach of gibberish. The stories Coyote had them read from the Odyssey or the Bible were easier to understand, though unsettling, as the people in them killed each other a lot and Hiroko said it was wrong. Coyote laughed at Hiroko and he often howled for no obvious reason as they read these gruesome tales, and asked them hard questions about what they had heard, and argued with them as if they knew what they were talking about, which was disconcerting.

"What would you do? Why would you do that?" All the while teaching ad them how the Rickover's fuel recycler worked, or making them all check the plunger hydraulics on the lake's wave machine, until their hands went from blue to white, and their teeth chattered so much they couldn't talk clearly. "You kids sure get cold easy," he said. "All but Nirgal."

Nirgal was good with cold. He knew intimately all its many stages, and he did not dislike the feel of it. People who disliked cold did not understand that one could adjust to it, that its bad effects could all be dealt with by a sufficient push from within. Nirgal was very familiar with heat as well. If you pushed heat out hard enough, then cold only became a sort of vivid shocking envelope in which you moved. And so cold's ultimate effect was as a stimulant, making you want to run.

Coyote's laugh was scary, an animal cackle that included all the noises anything could make. Different every time too. "Here, let's stop the wave machine and see what the lake looks like flat."

The water of the lake was always liquid, while the water ice all coating the underside of the dome had to stay frozen. This explained most of their mesocosmic weather, as Sax put it, giving them their mists and sudden winds, their rain and fog and occasional snow. 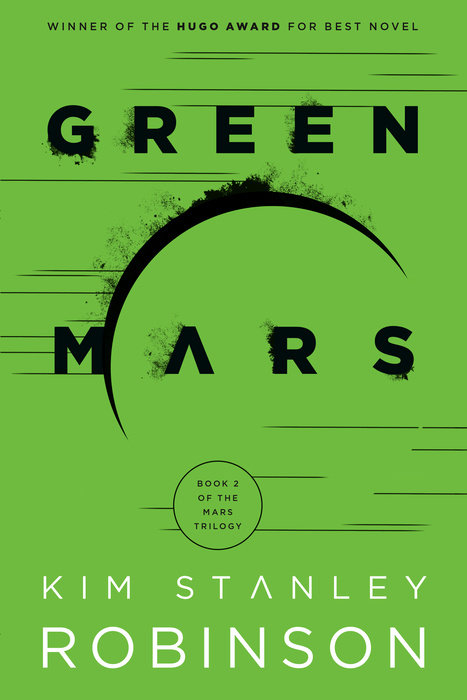