Winner of the Nebula Award for Best Novel • Discover the novel that launched one of science fiction’s most beloved, acclaimed, and awarded trilogies: Kim Stanley Robinson’s masterly near-future chronicle of interplanetary colonization.

“A staggering book . . . the best novel on the colonization of Mars that has ever been written.”—Arthur C. Clarke

For centuries, the barren, desolate landscape of the red planet has beckoned to humankind. Now a group of one hundred colonists begins a mission whose ultimate goal is to transform Mars into a more Earthlike planet. They will place giant satellite mirrors in Martian orbit to reflect light onto its surface. Black dust sprinkled on the polar caps will capture warmth and melt the ice. And massive tunnels drilled into the mantle will create stupendous vents of hot gases. But despite these ambitious goals, there are some who would fight to the death to prevent Mars from ever being changed.

An excerpt from Red Mars

“And so we came here. But what they didn’t realize was that by the time we got to Mars, we would be so changed by the voyage out that nothing we had been told to do mattered anymore. It wasn’t like submarining or settling the Wild West—it was an entirely new experience, and as the flight of the Ares went on, the Earth finally became so distant that it was nothing but a blue star among all the others, its voices so delayed that they seemed to come from a previous century. We were on our own; and so we became fundamentally different beings.”

All lies, Frank Chalmers thought irritably. He was sitting in a row of dignitaries, watching his old friend John Boone give the usual Boone Inspirational Address. It made Chalmers weary. The truth was the trip to Mars had been the functional equivalent of a long train ride. Not only had they not become fundamentally different beings, they had actually become more like themselves than ever, stripped of habits until they were left with nothing but the naked raw material of their selves. But John stood up there waving a forefinger at the crowd, saying, “We came here to make something new, and when we arrived our earthly differences fell away, irrelevant in this new world!” Yes, he meant it all literally. His vision of Mars was a lens that distorted everything he saw, a kind of religion. He would spout the same nonsense in private conversation, no matter how you rolled your eyes.

Chalmers stopped listening and let his gaze wander over the new city. They were going to call it Nicosia. It was the first town of any size to be built freestanding on the Martian surface; all the buildings were set inside what was in effect an immense clear tent, supported by a nearly invisible frame, and placed on the rise of Tharsis, west of Noctis Labyrinthus. This location gave it a tremendous view, with a distant western horizon punctuated by the broad peak of Pavonis Mons. For the Mars veterans in the crowd it was giddy stuff: they were on the surface, they were out of the trenches and mesas and craters, they could see forever! Hurrah!

A laugh from the audience drew Frank’s attention back to his old friend. John Boone had a slightly hoarse voice and a friendly Midwestern accent, and he was by turns (and somehow even all at once) relaxed, intense, sincere, self-mocking, modest, confident, serious, and funny. In short, the perfect public speaker. And the audience was rapt; this was the First Man On Mars speaking to them, and judging by the looks on their faces they might as well have been watching Jesus produce their evening meal out of the loaves and fishes. And in fact John almost deserved their adoration for performing a similar miracle on another plane, transforming their tin-can existence into an astounding spiritual voyage. “On Mars we will come to care for each other more than ever before,” John said, which really meant, Chalmers thought, an alarming incidence of the kind of behavior seen in rat overpopulation experiments; “Mars is a sublime, exotic and dangerous place,” said John—meaning a frozen ball of oxidized rock on which they were exposed to about fifteen rem a year; “And with our work,” John continued, “we are carving out a new social order and the next step in the human story”—i.e., the latest variant in primate dominance dynamics.

John finished with this flourish, and there was, of course, a huge roar of applause. Maya Toitovna then went to the podium to introduce Chalmers. Frank gave her a private look which meant he was in no mood for any of her jokes; she saw it and said, “Our next speaker has been the fuel in our little rocket ship,” which somehow got a laugh. “His vision and energy are what got us to Mars in the first place, so save any complaints you may have for our next speaker, my old friend Frank Chalmers.”

At the podium he found himself surprised by how big the town appeared. It covered a long triangle, and they were gathered at its highest point, a park occupying the western apex. Seven paths rayed down through the park to become wide, tree-lined, grassy boulevards. Between the boulevards stood low trapezoidal buildings, each faced with polished stone of a different color. The size and architecture of the buildings gave things a faintly Parisian look, Paris as seen by a drunk Fauvist in spring, sidewalk cafés and all. Four or five kilometers downslope the end of the city was marked by three slender skyscrapers, beyond which lay the low greenery of the farm. The skyscrapers were part of the tent framework, which overhead was an arched network of sky-colored lines. The tent fabric itself was invisible, and so taken all in all, it appeared that they stood in the open air. That was gold, that was. Nicosia was going to be a popular city.

Chalmers said as much to the audience, and enthusiastically they agreed. Apparently he had the crowd, fickle souls that they were, about as securely as John. Chalmers was bulky and dark, and he knew he presented quite a contrast to John’s blond good looks; but he knew as well that he had his own rough charisma, and as he warmed up he drew on it, falling into a selection of his own stock phrases.

Then a shaft of sunlight lanced down between the clouds, striking the upturned faces of the crowd, and he felt an odd tightening in his stomach. So many people there, so many strangers! People in the mass were a frightening thing (as they were individually)—all those wet ceramic alien eyes encased in pink blobs, looking at him…. Usually when he spoke to an audience he picked out a few faces and the rest became visual filler, but with the sunlight coursing over his shoulder they all caught at his eye at once, and it was nearly too much. Five thousand people in a single Martian town! After all the years in Underhill it was hard to grasp.

Foolishly he tried to tell the audience something of this. “Looking,” he said. “Looking around … the strangeness of our presence here is … accentuated.”

He was losing the crowd. How to say it? How to say that they alone in all that rocky world were alive, their faces glowing like paper lanterns in the light? How to say that even if living creatures were no more than carriers for ruthless genes, this was still somehow better than the blank mineral nothingness of everything else?

Of course he could never say it. Not at any time, perhaps, and certainly not in a speech. So he collected himself. “In the Martian desolation,” he said, “the human presence is, well, a remarkable thing.” (They would care for each other more than ever before, a voice in his mind repeated sardonically.) “The planet, taken in itself, is a dead frozen nightmare” (therefore exotic and sublime) “and so thrown on our own, we of necessity are in the process of … reorganizing a bit” (or forming a new social order)—so that yes, yes, yes, he found himself proclaiming exactly the same lies they had just heard from John!

Ridiculous. But lies were what people wanted; that was politics. Thus at the end of his speech he too got a big roar of applause. Irritated, he announced it was time to eat, depriving Maya of her chance for a final remark. Although probably she had known he would do that and so hadn’t bothered to think of any. Frank Chalmers liked to have the last word. 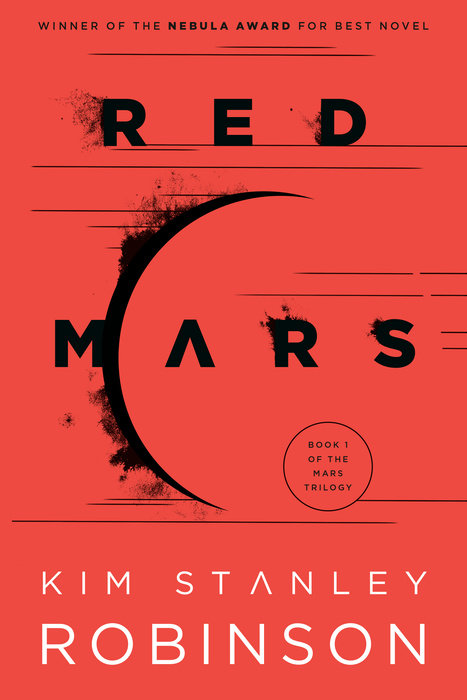