With an Introduction by Jane Smiley

First published in America in 1794, Charlotte Temple took the country by storm—in fact, it was this nation’s first bona fide “bestseller.” Susanna Rowson’s most famous work is the story of an innocent British schoolgirl who takes the advice of her depraved French teacher— with tragic consequences. Seduced by the dashing Lieutenant Montraville, who persuades her to move to America with him, the fifteen-year-old Charlotte leaves her adoring parents and makes the treacherous sea voyage to New York. In the land of opportunity, Charlotte is callously abandoned by Montraville. Alone and pregnant with an illegitimate child, she valiantly fights to stave off poverty and ruin.

This Modern Library Paperback Classic is set from the text of the first American edition.

An excerpt from Charlotte Temple

“Are you for a walk,” said Montraville to his companion, as they arose from table; “are you for a walk? or shall we order the chaise and proceed to Portsmouth?” Belcour preferred the former; and they sauntered out to view the town, and to make remarks on the inhabitants, as they returned from church.

Montraville was a Lieutenant in the army: Belcour was his brother officer: they had been to take leave of their friends previous to their departure for America, and were now returning to Portsmouth, where the troops waited orders for embarkation. They had stopped at Chichester to dine; and knowing they had sufficient time to reach the place of destination before dark, and yet allow them a walk, had resolved, it being Sunday afternoon, to take a survey of the Chichester ladies as they returned from their devotions.

They had gratified their curiosity, and were preparing to return to the inn without honouring any of the belles with particular notice, when Madame Du Pont, at the head of her school, descended from the church. Such an assemblage of youth and innocence naturally attracted the young soldiers: they stopped; and, as the little cavalcade passed, almost involuntarily pulled off their hats. A tall, elegant girl looked at Montraville and blushed: he instantly recollected the features of Charlotte Temple, whom he had once seen and danced with at a ball at Portsmouth. At that time he thought on her only as a very lovely child, she being then only thirteen; but the improvement two years had made in her person, and the blush of recollection which suffused her cheeks as she passed, awakened in his bosom new and pleasing ideas. Vanity led him to think that pleasure at again beholding him might have occasioned the emotion he had witnessed, and the same vanity led him to wish to see her again.

“She is the sweetest girl in the world,” said he, as he entered the inn. Belcour stared. “Did you not notice her?” continued Montraville: “she had on a blue bonnet, and with a pair of lovely eyes of the same colour, has contrived to make me feel devilish odd about the heart.”

“Pho,” said Belcour, “a musket ball from our friends, the Americans, may in less than two months make you feel worse.”

“I never think of the future,” replied Montraville, “but am determined to make the most of the present, and would willingly compound with any kind Familiar who would inform me who the girl is, and how I might be likely to obtain an interview.”

But no kind Familiar at that time appearing, and the chaise which they had ordered, driving up to the door, Montraville and his companion were obliged to take leave of Chichester and its fair inhabitant, and proceed on their journey.

But Charlotte had made too great an impression on his mind to be easily eradicated: having therefore spent three whole days in thinking on her and in endeavouring to form some plan for seeing her, he determined to set off for Chichester, and trust to chance either to favour or frustrate his designs. Arriving at the verge of the town, he dismounted, and sending the servant forward with the horses, proceeded toward the place, where, in the midst of an extensive pleasure ground, stood the mansion which contained the lovely Charlotte Temple. Mon- traville leaned on a broken gate, and looked earnestly at the house. The wall which surrounded it was high, and perhaps the Argus’s who guarded the Hesperian fruit within, were more watchful than those famed of old.

“ ’Tis a romantic attempt,” said he; “and should I even succeed in seeing and conversing with her, it can be productive of no good: I must of necessity leave England in a few days, and probably may never return; why then should I endeavour to engage the affections of this lovely girl, only to leave her a prey to a thousand inquietudes, of which at present she has no idea? I will return to Portsmouth and think no more about her.”

The evening now was closed; a serene stilness reigned; and the chaste Queen of Night with her silver crescent faintly illuminated the hemisphere. The mind of Montraville was hushed into composure by the serenity of the surrounding objects. “I will think on her no more,” said he, and turned with an intention to leave the place; but as he turned, he saw the gate which led to the pleasure grounds open, and two women come out, who walked arm-in-arm across the field.

“I will at least see who these are,” said he. He overtook them, and giving them the compliments of the evening, begged leave to see them into the more frequented parts of the town: but how was he delighted, when, waiting for an answer, he discovered, under the concealment of a large bonnet, the face of Charlotte Temple.

He soon found means to ingratiate himself with her companion, who was a French teacher at the school, and, at parting, slipped a letter he had purposely written, into Charlotte’s hand, and five guineas into that of Mademoiselle, who promised she would endeavour to bring her young charge into the field again the next evening. 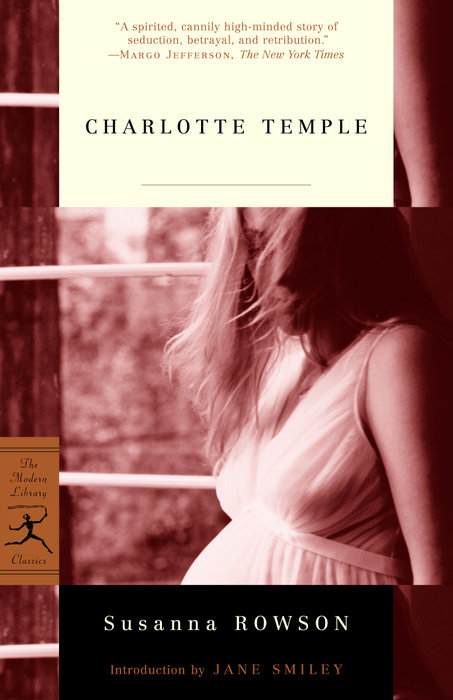