WINNER OF THE MAN BOOKER PRIZE • NEW YORK TIMES BESTSELLER • An affluent Indian family is forever changed by one fateful day in 1969, from the author of The Ministry of Utmost Happiness

“[The God of Small Things] offers such magic, mystery, and sadness that, literally, this reader turned the last page and decided to reread it. Immediately. It’s that haunting.”—USA Today

Compared favorably to the works of Faulkner and Dickens, Arundhati Roy’s modern classic is equal parts powerful family saga, forbidden love story, and piercing political drama. The seven-year-old twins Estha and Rahel see their world shaken irrevocably by the arrival of their beautiful young cousin, Sophie. It is an event that will lead to an illicit liaison and tragedies accidental and intentional, exposing “big things [that] lurk unsaid” in a country drifting dangerously toward unrest.

Lush, lyrical, and unnerving, The God of Small Things is an award-winning landmark that started for its author an esteemed career of fiction and political commentary that continues unabated.

An excerpt from The God of Small Things

May in Ayemenem is a hot, brooding month. The days are long and humid. The river shrinks and black crows gorge on bright mangoes in still, dustgreen trees. Red bananas ripen. Jackfruits burst. Dissolute bluebottles hum vacuously in the fruity air. Then they stun themselves against clear windowpanes and die, fatly baffled in the sun.

The nights are clear, but suffused with sloth and sullen expectation.

But by early June the southwest monsoon breaks and there are three months of wind and water with short spells of sharp, glittering sunshine that thrilled children snatch to play with. The countryside turns an immodest green. Boundaries blur as tapioca fences take root and bloom. Brick walls turn mossgreen. Pepper vines snake up electric poles. Wild creepers burst through latente banks and spill across the flooded roads. Boats ply in the bazaars. And small fish appear in the puddles that fill the PWD potholes on the highways.

“It was raining when Rahel came back to Ayemenem. Slanting silver ropes slammed into loose earth, plowing it up like gunfire. The old house on the hill wore its steep, gabled roof pulled over its ears like a low hat. The walls, streaked with moss, had grown soft, and bulged a little with dampness that seeped up from the ground. The wild, overgrown garden was full of the whisper and scurry of small lives. In the undergrowth a rat snake rubbed itself against a glistening stone. Hopeful yellow bullfrogs cruised the scummy pond for mates. A drenched mongoose flashed across the leaf strewn driveway.

The house itself looked empty. The doors and windows were locked. The front verandah bare. Unfurnished. But the skyblue Plymouth with chrome tailfins was still parked outside, and inside, Baby Kochamma was still alive.

She was Rahel’s baby grandaunt, her grandfather’s younger sister. Her name was really Navomi, Navomi Ipe, but everybody called her Baby. She became Baby Kochamma when she was old enough to be an aunt. Rahel hadn’t come to see her, though. Neither niece nor baby grandaunt labored under any illusions on that account. Rahel had come to see her brother, Estha. They were two-egg twins. “Dizygotic” doctors called them. Born from separate but simultaneously fertilized eggs. Estha—Esthappen—was the older by eighteen minutes.

“They never did look much like each other, Estha and Rahel, and even when they were thin-armed children, flat-chested, wormridden and Elvis Presley-puffed, there was none of the usual “Who is who?” and “Which is which?” from oversmiling relatives or the Syrian Orthodox bishops who frequently visited the Ayemenem House for donations.

The confusion lay in a deeper, more secret place.

In those early amorphous years when memory had only just begun, when life was full of Beginnings and no Ends, and Everything was Forever, Esthappen and Rahel thought of themselves together as Me, and separately, individually, as We or Us. As though they were a rare breed of Siamese twins, physically separate, but with joint identities.

Now, these years later, Rahel has a memory of waking up one night giggling at Estha’s funny dream.

She has other memories too that she has no right to have.

She remembers, for instance (though she hadn’t been there), what the Orangedrink Lemondrink Man did to Estha in Abhilash Talkies. She remembers the taste of the tomato sandwiches—Estha’s sandwiches, that Estha ate—on the Madras Mail to Madras.

And these are only the small things.


Anyway, now she thinks of Estha and Rahel as Them, because, separately, the two of them are no longer what They were or ever thought They’d be.

Their lives have a size and a shape now. Estha has his and Rahel hers.

Edges, Borders, Boundaries, Brinks and Limits have appeared like a team of trolls on their separate horizons. Short creatures with long shadows, patrolling the Blurry End. Gentle half-moons have gathered under their eyes and they are as old as Ammu was when she died. Thirty-one.

But a viable die-able age.


They were nearly born on a bus, Estha and Rahel. The car in which Babà, their father, was taking Ammu, their mother, to hospital in Shillong to have them, broke down on the winding tea-estate road in Assam. They abandoned the car and flagged down a crowded State Transport bus. With the queer compassion of the very poor for the comparatively well off, or perhaps only because they saw how hugely pregnant Ammu was, seated passengers made room for the couple, and for the rest of the journey Estha and Rahel’s father had to hold their mother’s stomach (with them in it) to prevent it from wobbling. That was before they were divorced and Ammu came back to live in Kerala.

According to Estha, if they’d been born on the bus, they’d have got free bus rides for the rest of their lives. It wasn’t clear where he’d got this information from, or how he knew these things, but for years the twins harbored a faint resentment against their parents for having diddled them out of a lifetime of free bus rides.

They also believed that if they were killed on a zebra crossing, the Government would pay for their funerals. They had the definite impression that that was what zebra crossings were meant for. Free funerals. Of course, there were no zebra crossings to get killed on in Ayemenem, or, for that matter, even in Kottayam, which was the nearest town, but they’d seen some from the car window when they went to Cochin, which was a two-hour drive away.


The Government never paid for Sophie Mol’s funeral because she wasn’t killed on a zebra crossing. She had hers in Ayemenem in the old church with the new paint. She was Estha and Rahel’s cousin, their uncle Chacko’s daughter. She was visiting from England. Estha and Rahel were seven years old when she died. Sophie Mol was almost nine. She had a special child-sized coffin.

She lay in it in her yellow Crimplene bell-bottoms with her hair in a ribbon and her Made-in-England go-go bag that she loved. Her face was pale and as wrinkled as a dhobi’s thumb from being in water for too long. The congregation gathered around the coffin, and the yellow church swelled like a throat with the sound of sad singing. The priests with curly beards swung pots of frankincense on chains and never smiled at babies the way they did on usual Sundays.
The long candles on the altar were bent. The short ones weren’t.

An old lady masquerading as a distant relative (whom nobody recognized, but who often surfaced next to bodies at funerals—a funeral junkie? A latent necrophiliac?) put cologne on a wad of cotton wool and with a devout and gently challenging air, dabbed it on Sophie Mol’s forehead. Sophie Mol smelled of cologne and coffin-wood.

The family stood huddled together. Margaret Kochamma, Chacko, Baby Kochamma, and next to her, her sister-in-law, Mammachi—Estha and Rahel’s (and Sophie Mol’s) grandmother. Mammachi was almost blind and always wore dark glasses when she went out of the house. Her tears trickled down from behind them and trembled along her jaw like raindrops on the edge of a roof.

She looked small and ill in her crisp off-white sari. Chacko was Mammachi’s only son. Her own grief grieved her. His devastated her.

Though Ammu, Estha and Rahel were allowed to attend the funeral, they were made to stand separately, not with the rest of the family. Nobody would look at them.

It was hot in the church, and the white edges of the arum lilies crisped and curled. A bee died in a coffin flower. Ammu’s hands shook and her hymnbook with it. Her skin was cold. Estha stood close to her, barely awake, his aching eyes glittering like glass, his burning cheek against the bare skin of Ammu’s trembling, hymnbook-holding arm.

Rahel, on the other hand, was wide awake, fiercely vigilant and brittle with exhaustion from her battle against Real Life.

She noticed that Sophie Mol was awake for her funeral. She showed Rahel Two Things.

Thing One was the newly painted high dome of the yellow church that Rahel hadn’t ever looked at from the inside. It was painted blue like the sky, with drifting clouds and tiny whizzing jet planes with white trails that crisscrossed in the clouds. It’s true (and must be said) that it would have been easier to notice these things lying in a coffin looking up than standing in the pews, hemmed in by sad hips and hymnbooks.

Rahel thought of the someone who had taken the trouble to go up there with cans of paint, white for the clouds, blue for the sky, silver for the jets, and brushes, and thinner. She imagined him up there, someone like Velutha, barebodied and shining, sitting on a plank, swinging from the scaffolding in the high dome of the church, painting silver jets in a blue church sky.

She thought of what would happen if the rope snapped. She imagined him dropping like a dark star out of the sky that he had made. Lying broken on the hot church floor, dark blood spilling from his skull like a secret.

By then Esthappen and Rahel had learned that the world had other ways of breaking men. They were already familiar with the smell. Sicksweet. Like old roses on a breeze.

During the funeral service, Rahel watched a small black bat climb up Baby Kochamma’s expensive funeral sari with gently clinging curled claws. When it reached the place between her sari and her blouse, her roll of sadness, her bare midriff, Baby Kochamma screamed and hit the air with her hymnbook. The singing stopped for a “Whatisit? Whathappened?” and for a Furrywhirring and a Sariflapping.

Arundhati Roy is the author of The God of Small Things, which won the Booker Prize and has been translated into more than forty languages. She also has published several books of nonfiction including The End of Imagination, Capitalism: A Ghost Story and The Doctor and the Saint. She lives in New Delhi. 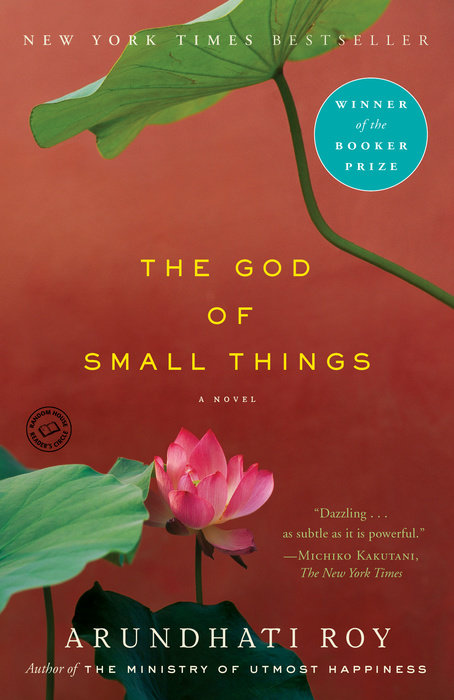