Twice the combined might of Ynis Aielle's greatest heroes and wizards has hurled back the demon armies of Morgan Thalasi.  Always the Black Warlock has rebounded, stronger and more evil.  But never has he wielded such power as now.  With the Staff of Death, Thalasi can raise a new army from out of the very ground -- soldiers who cannot be killed because they are already dead.

As the Black Warlock and his fearsome general -- the foul wraith that was once Hollis Mitchell -- prepares a devastating attack, the humans and elves of Ynis Aielle are staggered by a fresh calamity.  The beautiful Rhiannon, daughter of the Emerald Witch, has been captured by Mitchell and given over to his dark master.  Now the last hope of defeating Thalasi -- and Rhiannon's last hope as well -- lies at the heart of a mountain, guarded by a dragon as old as the world itself. . .

An excerpt from Bastion of Darkness

The Swordsman and the Witch

HE LOOKED at her perplexed, an expression of confusion that caught the
young woman off her guard, and, with an ambush set so close at hand,
surely unnerved her.

"What do ye know?" Rhiannon asked, brushing her raven black hair from her
face, her crystal blue eyes shining, flashing, to match the diamond that
was set in her forehead--the mark of magic that identified her as a witch.

"The day," young Bryan of Corning replied absently, a wistful smile
brightening his face. "This day."

"Ayuh," Rhiannon prompted, glancing about nervously. "Are we not to fight
them then?"

"My birthday," Bryan explained with a wry smile.

Rhiannon's face lit up, as much with relief that the lad had not seen any
dangerous flaw with their ambush plan as with her sincere joy at the news
of Bryan's birthday.

Rhiannon's smile only widened, but behind it came an honest surprise.
Sixteen? she echoed in her mind, over and over, incredulously. With his
delicate features and shining hair and eyes, the same brilliant gray orbs
of his elven father, Meriwindle, Bryan did indeed have the appearance of
youth. But his heritage was half elven, and even Arien Silverleaf, who was
eldar of the elves and had lived through centuries, appeared youthful.
Rhiannon had spent three months beside Bryan, fighting talons along the
southwestern fields of Calva and in the Baerendil Mountains, and never
would she have guessed that this cunning warrior, this hero to so many of
the folk who had been trapped on this side of the great River Ne'er Ending
after the war, this strong young man who had slain so very many evil talons, could possibly be so young!Rhiannon herself had just passed her twenty-first birthday,
and she had thought Bryan--so wise, so composed--to be at least her own age.

"Yer thoughts should be to the fight," Rhiannon replied dryly.

"A kiss for victory, when the day is won."
Bryan seemed satisfied with that. He gave a quick salute, then hoisted his
shield, emblazoned with the crescent moon symbol of Illuma, the enchanted
valley of his elven father's people, and the bow that Rhiannon had created
for him, and ran off to his appointed place.

Rhiannon watched him go with mixed feelings, both for him and for her
promise. She had indeed grown to love Bryan, to admire and respect him fully. And
he had saved her life, she understood, for without his companionship,
without him holding her hand and calling out to her, bringing her back
from the depths of the darkest and strongest magic the young witch had
ever known, she never would have survived the great battle with the Black
Warlock, Morgan Thalasi. In that battle, young Rhiannon had come fully
into her magical power, though that power and all the magic remaining in
all the world paled beside the glory the four wizards of Ynis Aielle had
known only a few short months before--before the power-hungry Thalasi had
reached too far, had torn the very fabric of universal strength, had torn
out the heart of the wizards' secret domain. 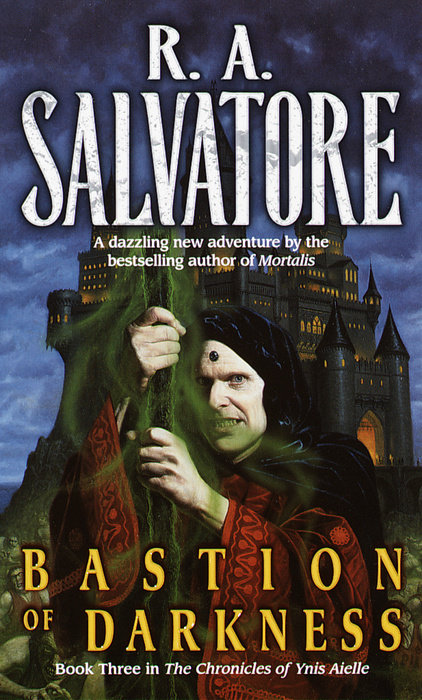