“One of the great culinary stories of our time.”—Dwight Garner, The New York Times

It begins with a simple ritual: Every Saturday afternoon, a boy who loves to cook walks to his grandmother’s house and helps her prepare a roast chicken for dinner. The grandmother is Swedish, a retired domestic. The boy is Ethiopian and adopted, and he will grow up to become the world-renowned chef Marcus Samuelsson. This book is his love letter to food and family in all its manifestations. Yes, Chef chronicles Samuelsson’s journey, from his grandmother’s kitchen to his arrival in New York City, where his outsize talent and ambition finally come together at Aquavit, earning him a New York Times three-star rating at the age of twenty-four. But Samuelsson’s career of chasing flavors had only just begun—in the intervening years, there have been White House state dinners, career crises, reality show triumphs, and, most important, the opening of Red Rooster in Harlem. At Red Rooster, Samuelsson has fulfilled his dream of creating a truly diverse, multiracial dining room—a place where presidents rub elbows with jazz musicians, aspiring artists, and bus drivers. It is a place where an orphan from Ethiopia, raised in Sweden, living in America, can feel at home.

“Such an interesting life, told with touching modesty and remarkable candor.”—Ruth Reichl

“Marcus Samuelsson has an incomparable story, a quiet bravery, and a lyrical and discreetly glittering style—in the kitchen and on the page. I liked this book so very, very much.”—Gabrielle Hamilton

“Plenty of celebrity chefs have a compelling story to tell, but none of them can top [this] one.”—The Wall Street Journal

“Elegantly written . . . Samuelsson has the flavors of many countries in his blood.”—The Boston Globe

“Red Rooster’s arrival in Harlem brought with it a chef who has reinvigorated and reimagined what it means to be American. In his famed dishes, and now in this memoir, Marcus Samuelsson tells a story that reaches past racial and national divides to the foundations of family, hope, and downright good food.”—President Bill Clinton

An excerpt from Yes, Chef

I have never seen a picture of my mother.

I have traveled to her homeland, my homeland, dozens of times. I have met her brothers and sisters. I have found my birth father and eight half brothers and sisters I didn’t know I had. I have met my mother’s relatives in Ethiopia, but when I ask them to describe my mother, they throw out generalities. “She was nice,” they tell me. “She was pretty.” “She was smart.” Nice, pretty, smart. The words seem meaningless, except the last is a clue because even today, in rural Ethiopia, girls are not encouraged to go to school. That my mother was intelligent rings true because I know she had to be shrewd to save the lives of myself and my sister, which is what she did, in the most mysterious and miraculous of ways.

My mother’s family never owned a photograph of her, which tells you everything you need to know about where I’m from and what the world was like for the people who gave me life. In 1972, in the United States, Polaroid introduced its most popular instant camera. In 1972, the year my mother died, an Ethiopian woman could go her whole life without having her picture taken—especially if, as was the case with my mother, her life was not long.

I have never seen a picture of my mother, but I know how she cooked. For me, my mother is berbere, an Ethiopian spice mixture. You use it on everything, from lamb to chicken to roasted peanuts. It’s our salt and pepper. I know she cooked with it because it’s in the DNA of every Ethiopian mother. Right now, if I could, I would lead you to the red tin in my kitchen, one of dozens I keep by the stove in my apartment in Harlem, filled with my own blend and marked with blue electrical tape and my own illegible scrawl. I would reach into this tin and grab a handful of the red-orange powder, and hold it up to your nose so you could smell the garlic, the ginger, the sundried chili.

My mother didn’t have a lot of money so she fed us shiro. It’s a chickpea flour you boil, kind of like polenta. You pour it into hot water and add butter, onions, and berbere. You simmer it for about forty-five minutes, until it’s the consistency of hummus, and then you eat it with injera, a sour, rich bread made from a grain called teff. I know this is what she fed us because this is what poor people eat in Ethiopia. My mother carried the chickpea powder in her pocket or bag. That way, all she needed to make dinner was water and fire. Injera is also portable, so it is never wasted. If you don’t finish it, you leave it outside and let it dry in the sun. Then you eat it like chips.

In Meki, the small farming village where I’m from, there are no roads. We are actually from an even smaller village than Meki, called Abrugandana, that does not exist on most maps. You go to Meki, take a right in the middle of nowhere, walk about five miles, and that is where we are from.

I know my mother was not taller than five feet, two inches, but I also know she was not delicate. Those country women in Ethiopia are strong because they walk everywhere. I know her body because I know those women. When I go there now, I stare at the young mothers to the point of being impolite. I stare at those young women and their children and it’s like watching a home movie that does not exist of my childhood. Each woman has a kid, who might well be me, on her back, and the fingers of her right hand are interlocked with another slightly older kid, and that kid is like my sister. The woman has her food and wares in her bag, which is slung across her chest and rests on her hip. The older kid is holding a bucket of water on her shoulders, a bucket that’s almost as heavy as she is. That’s how strong that child is.

Women like my mother don’t wear shoes. They don’t have shoes. My mother, sister, and I would walk the Sidama savannah for four hours a day, to and from her job selling crafts in the market. Before three p.m. it would be too hot to walk, so we would rest under a tree and gather our strength and wait for the sun to set. After eight p.m. it was dark and there were new threats—animals that would see a baby like me as supper and dangerous men who might see my mother as another kind of victim.

I have never seen a picture of my mother, but I know her features because I have seen them staring back at me in the mirror my entire life. I know she had a cross somewhere near her face. It was a henna tattoo of a cross, henna taking the place of the jewelry she could not afford or even dream of having. There was also an Orthodox cross somewhere on the upper part of my mother’s body, maybe on her neck, maybe on her chest, near her heart. She had put it there to show that she was a woman of faith. She was an Orthodox Ethiopian Christian, which is very similar to being Catholic.

I don’t remember my mother’s voice, but I know she spoke two languages. In The Souls of Black Folk, W.E.B. DuBois spoke of the double consciousness that African Americans are born into, the need to be able to live in both the black world and the white world. But that double consciousness is not limited to African Americans. My mother was born into it, too. Her tribe was a minority in that section of Ethiopia and it was essential to her survival that she spoke both the language of her village, Amhara, and the language of the greater outside community, which is Oromo. She was cautious and when she left the Amharic village, she flipped that switch. She not only spoke Oromo, she spoke it with a native accent.

I don’t know my mother’s face, but I sometimes think I remember the sound of her breath. I was two when a tuberculosis epidemic hit Ethiopia. My mother was sick, I was sick, and my sister Fantaye was doing only slightly better than the two of us. We were all coughing up blood and my mother had seen enough in her young life to measure the ravages of that disease. She knew she had to do something. She put me on her back. It was all coming at her now: the fatigue and the fever; pieces of her lung splintering and mixing with her throw-up; the calcifications on her bones, where the disease had already spread. She and Fantaye walked more than seventy-five miles, my mother carrying me the whole way, under a hot sun, from our village to the hospital in Addis Ababa to get help. I don’t know how many days they walked, or how sick my mother was by the time she got there. But I do know that when we arrived, there were thousands of people standing in the street, sick and dying, awaiting care. I do not know how my mother managed to get us through those lines and into that hospital. I do know that she never left that hospital and that perhaps it was only by the miracle of that henna cross that Fantaye and I got out alive.

Today, in the dead of night when I should be sleeping, I sometimes imagine the breath of the woman who not only gave me life, but delivered me from death. I sometimes reach into that tin by my stove and take a handful of berbere, sift it through my fingers, and toss it into the pan. I watch my wife cook and I imagine that I can see my mother’s hands. I have taught myself the recipes of my mother’s people because those foods are for me, as a chef, the easiest connection to the mysteries of who my mother was. Her identity remains stubbornly shrouded in the past, so I feed myself and the people I love the food that she made. But I cannot see her face.

Veronica Chambers is a prolific author, best known for her critically acclaimed memoir Mama's Girl. She coauthored the award-winning memoir Yes, Chef with chef Marcus Samuelsson, as well as Samuelsson's young-adult memoir Make It Messy, and has collaborated on four New York Times bestsellers, most recently 32 Yolks, which she cowrote with chef Eric Ripert. She has been a senior editor at the New York Times Magazine, Newsweek, and Glamour. Born in Panama and raised in Brooklyn, she writes often about her Afro-Latina heritage. She speaks, reads, and writes Spanish, but she is truly fluent in Spanglish. She is currently a John S. Knight journalism fellow at Stanford University. Her upcoming novel is The Go-Between. 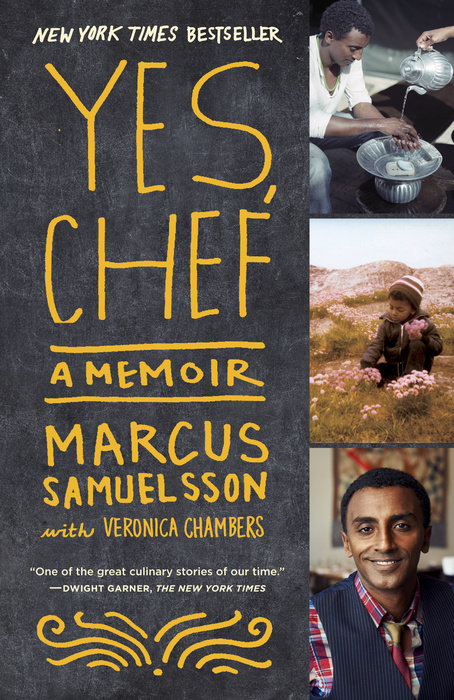