The chilling tale of the undead in a galaxy far, far away.

“This is the Star Wars of every horror fan’s dreams—gory, funny, and brimming with a blood-spattered cast of swashbucklers and space-zombies.”—Seth Grahame-Smith, author of Pride and Prejudice and Zombies

When the Imperial prison barge Purge—temporary home to five hundred of the galaxy’s most ruthless killers, Rebels, scoundrels, and thieves—breaks down in a distant part of space, its only hope appears to lie with a Star Destroyer found drifting and seemingly abandoned. But when a boarding party from the Purge is sent to scavenge for parts, only half of them come back—bringing with them a horrific disease so lethal that within hours, nearly all aboard the Purge die in ways too hideous to imagine.

And death is only the beginning.

The Purge’s half-dozen survivors will do whatever it takes to stay alive. But nothing can prepare them for what lies waiting aboard the Star Destroyer. For the dead are rising: soulless, unstoppable, and unspeakably hungry.


The nights were the worst.

Even before his father's death, Trig Longo had come to dread the long hours after lockdown, the shadows and sounds and the chronically unstable gulf of silence that drew out in between them. Night after night he lay still on his bunk and stared up at the dripping durasteel ceiling of the cell in search of sleep or some acceptable substitute. Sometimes he would actually start to drift off, floating away in that comforting sensation of weightlessness, only to be rattled awake-heart pounding, throat tight, stomach muscles sprung and fluttering-by some shout or a cry, an inmate having a nightmare.

There was no shortage of nightmares aboard the Imperial Prison Barge Purge.

Trig didn't know exactly how many prisoners the Purge was currently carrying. He guessed maybe five hundred, human and otherwise, scraped from every corner of the galaxy, just as he and his family had been picked up eight standard weeks before. Sometimes the incoming shuttles returned almost empty; on other occasions they came packed with squabbling alien life-forms and alleged Rebel sympathizers of every stripe and species. There were assassins for hire and sociopaths the likes of which Trig had never seen, thin-lipped things that cackled and sneered in seditious languages that, to Trig's ears, were little more than clicks and hisses.

Every one of them seemed to harbor its own obscure appetites and personal grudges, personal histories blighted with shameful secrets and obscure vendettas. Being cautious became harder; soon you needed eyes in the back of your head-which some of them actually possessed. Two weeks earlier in the mess hall, Trig had noticed a tall, silent inmate sitting with its back to him but watching him nonetheless with a single raw-red eye in the back of its skull. Every day the red-eyed thing seemed to be sitting a little nearer. Then one day, without explanation, it was gone.

Except from his dreams.

Sighing, Trig levered himself up on his elbows and looked through the bars onto the corridor. Gen Pop had cycled down to minimum power for the night, edging the long gangway in permanent gray twilight. The Rodians in the cell across from his had gone to sleep or were feigning it. He forced himself to sit there, regulating his breathing, listening to the faint echoes of the convicts' uneasy groans and murmurs. Every so often a mouse droid or low-level maintenance unit, one of hundreds occupying the barge, would scramble by on some preprogrammed errand or another. And of course, below it all-low and not quite beneath the scope of hearing-was the omnipresent thrum of the barge's turbines gnashing endlessly through space.

For as long as they'd been aboard, Trig still hadn't gotten used to that last sound, the way it shook the Purge to its framework, rising up through his legs and rattling his bones and nerves. There was no escaping it, the way it undermined every moment of life, as familiar as his own pulse.

Trig thought back to sitting in the infirmary just two weeks earlier, watching his father draw one last shaky breath, and the silence afterward as the medical droids disconnected the biomonitors from the old man's ruined body and prepared to haul it away. As the last of the monitors fell silent, he'd heard that low steady thunder of the engines, one more unnecessary reminder of where he was and where he was going. He remembered how that noise had made him feel lost and small and inescapably sad-some special form of artificial gravity that seemed to work directly against his heart.

He had known then, as he knew now, that it really only meant one thing, the ruthlessly grinding effort of the Empire consolidating its power.

Forget politics, his father had always said. Just give 'em something they need, or they'll eat you alive. And now they'd been eaten alive anyway, despite the fact that they'd never been sympathizers, no more than low-level grifters scooped up on a routine Imperial sweep. The engines of tyranny ground on, bearing them forward across the galaxy toward some remote penal moon. Trig sensed that noise would continue, would carry on indefinitely, echoing right up until-

It was Kale's voice behind him, unexpected, and Trig flinched a little at the sound of it. He looked back and saw his older brother gazing back at him, Kale's handsomely rumpled, sleep-slackened face just a ghostly three-quarter profile suspended in the cell's gloom. Kale looked like he was still only partly awake and unsure whether or not he was dreaming any of this.

Trig cleared his throat. His voice had started changing recently, and he was acutely aware of how it broke high and low when he wasn't paying strict attention. "Nothing."

"You worried about tomorrow?"

" 'S okay if you are." Kale seemed to consider this and then uttered a bemused grunt. "You'd be crazy not to be."   "You're not scared," Trig said. "Dad would never have-"

"No." The word snapped from his throat with almost painful angularity. "We need to stick together, that's what Dad said."

"Fourteen next month." Trig felt another flare of emotion at the mention of his age. "Old enough."

"Well, sleep on it, see if you feel different in the morning..." Kale's enunciation was already beginning to go muddled as he slumped back down on his bunk, leaving Trig sitting up with his eyes still riveted to the long dark concourse outside the cell, Gen Pop, that had become their no-longer-new home.

Sleep on it, he thought, and in that exact moment, miraculously, as if by power of suggestion, sleep actually began to seem like a possibility. Trig lay back and let the heaviness of his own fatigue cover him like a blanket, superseding anxiety and fear. He tried to focus on the sound of Kale's breathing, deep and reassuring, in and out, in and out.

Then somewhere in the depths of the levels, an inhuman voice wailed. Trig sat up, caught his breath, and felt a chill tighten the skin of his shoulders, arms and back, crawling over his flesh millimeter by millimeter, bristling the small hairs on the back of his neck. Over in his bunk the already sleeping Kale rolled over and grumbled something incoherent.

There was another scream, weaker this time. Trig told himself it was just one of the other convicts, just another nightmare rolling off the all-night assembly line of the nightmare factory.

It sounded like a convict, whatever life-form it was, was under attack.

He sat perfectly still, squeezed his eyes tight, and waited for the pounding of his heart to slow down, just please slow down. But it didn't. He thought of the thing in the cafeteria, the disappeared inmate whose name he'd never know, watching him with its red staring eye. How many other eyes were on him that he never saw?

But he already knew there would be no more sleeping here tonight.

In Trig's old life, back on Cimarosa, breakfast had been the best meal of the day. Besides being an expert trafficker in contraband, a veteran fringe dweller who cut countless deals with thieves, spies, and counterfeiters, Von Longo had also been one of the galaxy's greatest unrecognized breakfast chefs. Eat a good meal early, Longo always told his boys. You never know if it's going to be your last.

Here on the Purge, however, breakfast was rarely edible and sometimes actually seemed to shiver in the steady vibrations as though still alive on the plate. This morning Trig found himself gazing down at a pasty mass of colorless goo spooned into shaved gristle, the whole thing plastered together in sticky wads like some kind of meat nest assembled by carnivorous flying insects. He was still nudging the stuff listlessly around his tray when Kale finally raised his eyebrows and peered at him.

"You sleep at all last night?" Kale asked.

"What, you mean this?" Trig poked at the contents of the tray again and shuddered. "I'm not hungry," he said, and watched Kale shovel the last bite of his own breakfast into his mouth with disturbing gusto. "You think the food will be any better when we get to the detention moon?"

"Little brother, I think we'll be lucky if we don't end up on the menu."

Trig gave him a bleak look. "Don't give 'em any ideas."

"Hey, lighten up." Kale wiped his mouth on his sleeve and grinned. "Little guy like you, they'll probably just use you for an appetizer."

Joe Schreiber is the author of Chasing the Dead, Eat the Dark, and No Doors, No Windows. He was born in Michigan but spent his formative years in Alaska, Wyoming, and Northern California. He lives in central Pennsylvania with his wife, two young children, and several original Star Wars action figures. 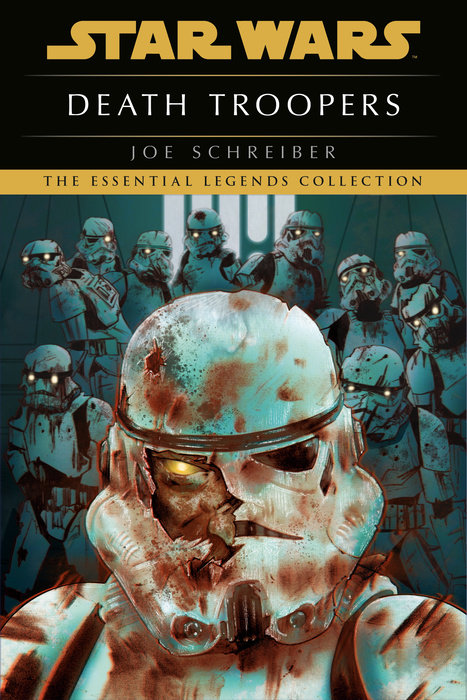