The Discovery Of Harmony Between Modern Science And The Bible

A ground-breaking book that takes on skeptics from both sides of the cosmological debate, arguing that science and the Bible are not at odds concerning the origin of the universe.

The culmination of a physicist's thirty-five-year journey from MIT to Jerusalem, Genesis and the Big Bang presents a compelling argument that the events of the billions of years that cosmologists say followed the Big Bang and those of the first six days described in Genesis are, in fact, one and the same—identical realities described in vastly different terms. In engaging, accessible language, Dr. Schroeder reconciles the observable facts of science with the very essence of Western religion: the biblical account of Creation.

Carefully reviewing and interpreting accepted scientific principles, analogous passages of Scripture, and biblical scholarship, Dr. Schroeder arrives at a conclusion so lucid that one wonders why it has taken this long in coming. The result for the reader—whether believer or skeptic, Jewish or Christian—is a totally fresh understanding of the key events in the life of the universe.

An excerpt from Genesis and the Big Bang Theory

Know what to answer a skeptic.
—Talmud

For the last few years, I have had a continuing debate with my son Joshua. By the age of eight, Josh had already completed five years of biblical study. He had been taught to relate to the Bible in its most literal sense, and so for him, and for many of his teachers, the age of the universe is exactly the age derived from the generations as they are listed in the Bible. This comes to approximately 57 centuries. For them, the cosmological estimate of the age of the universe, some 15 billion years, is a preposterous fiction. According to a literal reading of the Bible, six days is stated as the time between “the beginning” and the appearance of man—and six days it is. As we shall learn, the forebears of this same biblical tradition were well aware that a theology devoid of knowledge of the physical universe was (and is) a contradiction in terms. The implications of general relativity and Doppler shifts in light are an essential part in understanding the opening chapters of Genesis. Although the insights provided by modern science have yet to be assimilated by many contemporary teachers of Genesis, we shall find that they are a help rather than a hindrance toward the rapprochement of the secular and nonsecular.

The discrepancy between the 5700-year biblical age of the universe and the 15-billion-year scientific estimate might not have caused the family debate that led me to write Genesis and the Big Bang had there not been one, almost extraneous, circumstance in our lives. That circumstance was a nearby archaeological dig.

For three years we lived in Zikhron Ya’aqov, a village on the Carmel range overlooking Israel’s coastal plain. The plain is bounded on the west by the Mediterranean. A few kilometers inland from the shore, the massive limestone outcrop of the Carmel range rises abruptly to form the plain’s eastern boundary. It is a wonderfully productive area. This is especially true of the region between Zikhron Ya’aqov and Haifa. Here rows of avocado and orange trees, heavy with foliage and fruit, border the blue-green waters filling acres of fishponds. These ponds share space with white-specked fields of cotton. The productivity of the area is probably not new. Archaeological evidence indicates that this land has provided its material abundance to man and his predecessors for tens of thousands of years.

A few kilometers north of our village, among scrub growth halfway up the steep face of Mt. Carmel, the yawning black openings of several particularly large caves appear as sentinels overseeing the coast. On two or three occasions, my family and I have scrambled up Mt. Carmel to explore the archaeological digs within the caves. It is these digs that are the source of my continuing debate with Josh.

Here artifacts and fossils of that prehistoric animal, Neanderthal man, have been found. For the theologian steeped in a superficial reading of Genesis, these fossils may be Neanderthal, but they have nothing to do with man!

For the paleontologist, the age of the fossils also presents a problem, but of a different sort. The bones of Neanderthal man are too old to date using carbon-14 methods. So much of the original skeletal carbon-14 has decayed (one-half the original content decays radioactively each 5,600 years) that the small amount of carbon-14 remaining cannot be reliably measured. The bones’ location within geologically known strata gives them an estimated age of 60,000 years.4 For Josh and for many other people, Jew and Christian alike, a 60,000-year archaeological history is at least 54,000 years in error. It is totally at odds with a literal understanding of the opening chapters of the book of Genesis.

But this discord between archaeology and theology is neither necessary nor valid. As I have studied the details of biblical and scientific texts, I have reached what was for me an enlightening and unexpected conclusion: The biblical narrative and the scientific account of our genesis are two mutually compatible descriptions of the same, single, and identical reality. My goal in this book is to explain that compatibility to expert and layperson alike.

Simply stated, I will discuss here the first week of Genesis. To the literalist, these first six days can be a problem. Fossils place the appearance of beings with humanlike features at well over the 60,000-year age of the Neanderthal fossils of the Carmel caves. Although dating the time of Peking man’s existence has the same types of problems as those encountered when dating the remains of Neanderthal man, the archaeological estimate is that these humanlike animals lived some 300,000 years ago. Their home, near Cho-k’ou-tien, China, was in a group of limestone caves quite similar to those found in the Carmel range. Homo erectus, the genus and species to which Peking man belonged, made its appearance 1.5 to 2 million years ago. Because of this antiquity, only a few nearly complete Homo erectus skeletons have been found. One of these, located in what is now an arid region of Kenya, is the Lake Turkana Boy. It is estimated that the lad lived his twelve years of life 1.6 million years ago. Looking at this fossil, it is clear that, except for the shortened forehead, these early hominids had features so similar to modern humans that they could go unnoticed if they walked on a busy city street.

But does mankind’s history really stretch back a million years, or even several tens of thousands of years? A strictly literal view of the Bible would say no. To the literalist, there was no prehistoric man. Adam was the first man and he was formed some 5700 years ago from the dust of the Earth (Gen. 2:7).

Part of the contradiction between archaeological evidence and biblical tradition is semantic, originating in the use of the word man. Archaeologists use the term to describe prehistoric animals that had some, but not necessarily all, of the features of modern man. Biblically speaking, the term man is applicable only to Adam and his progeny. It is, however, no secret that the divergent views of science and tradition are based on differences far more fundamental than the definition of words. In fact, most biblical commentators accept that the meaning of words of the Bible, especially as in the creation story, must be understood in accordance with their context. The terms for water, darkness, wind, heavens, and earth as used in the first ten verses of Genesis have meanings that are quite different when used later on in the Bible. It is the calendar of the early universe that raises a discrepancy far more difficult to explain than the variances in terminology.

Entire herds of fossilized rhinoceroses, their calves nestled between their legs in nursing position, have been dated by the potassium-argon content of the volcanic ash that buried them, as having lived 10 million years ago. Dinosaurs have been firmly established, at least according to paleontologists’ data, to have roamed the Earth for 100 million years, becoming extinct some 65 million years ago. The simplest forms of life, the early prokaryotic (nucleus-free) bacteria and blue-green algae, make their first fossil appearance in earliest sedimentary rocks. These are dated as being 3 to 4 billion years old. The oldest rocks are only some 600 million years older. These are the original igneous rocks.

The length of this fossil record certainly seems to contradict the relatively brief period of creation and genesis presented by the Bible. And yet the fossil record covers only a fraction of the age that current cosmological observations ascribe to our universe. Where do the preponderance of paleontological and astronomical data, indicating an Earth some 4.5 billion years old and a universe that reaches back 10 to 20 billion years, fit into traditional biblical scholarship? At first it would appear that these findings put paleontology hopelessly at odds with the Bible. For the total cosmic evolution from the creation (the “In the beginning …” of Genesis 1:1) to the appearance of Adam gets only a bit more than five biblical days.

As an affirmation of faith, the literalist can explain the paleontological finds as having been placed in rocks at creation by the Creator. They might be there to satisfy man’s need to rationalize the nature of the world, or to test man’s belief in the biblical narrative. This argument, while impossible to disprove, is the weakest of reeds (Isa. 36:6) in a world full of explosive and convincing discovery.

Gerald Schroeder is an applied physicist and an applied theologian who received his undergraduate and doctoral degrees from the Massachusetts Institute of Technology. A resident of Jerusalem and a lecturer and adviser around the world, his research has been reported in Newsweek, The Jerusalem Post, and numerous scholarly publications.

The Discovery Of Harmony Between Modern Science And The Bible 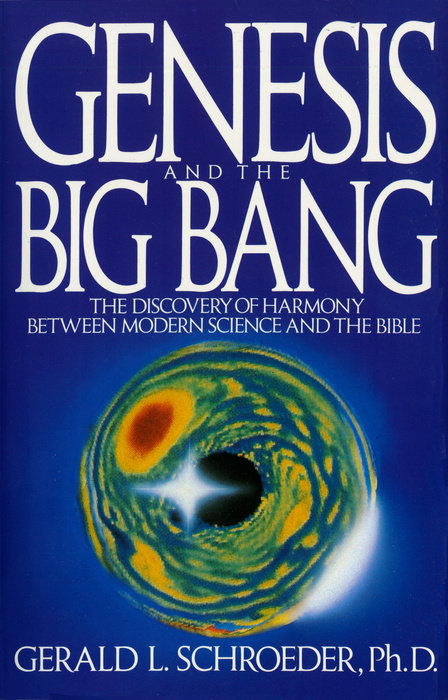