Running from her father’s brutal legacy, Joseph Stalin’s daughter defects to the United States during the turbulence of the 1960s. For fans of We Were the Lucky Ones and A Gentleman in Moscow, this sweeping historical novel and unexpected love story is inspired by the remarkable life of Svetlana Alliluyeva.

“The Red Daughter does exactly what good historical fiction should do: It sends you down the rabbit hole to read and learn more.”—The New York Times Book Review

In one of the most momentous events of the Cold War, Svetlana Alliluyeva, the only daughter of the Soviet despot Joseph Stalin, abruptly abandoned her life in Moscow in 1967, arriving in New York to throngs of reporters and a nation hungry to hear her story. By her side is Peter Horvath, a young lawyer sent by the CIA to smuggle Svetlana into America.

She is a contradictory celebrity: charismatic and headstrong, lonely and haunted, excited and alienated by her adopted country’s radically different society. Persuading herself that all she yearns for is a simple American life, she attempts to settle into a suburban existence in Princeton, New Jersey. But one day an invitation from the widow of the architect Frank Lloyd Wright arrives, and Svetlana impulsively joins her cultlike community at Taliesin West. When this dream ends in disillusionment, Svetlana reaches out to Peter, the one person who understands how the chains of her past still hold her prisoner. Their relationship changes and deepens, moving from America to England to the Soviet Union and back again, unfolding under the eyes of her CIA minders, and Svetlana’s and Peter’s private lives are no longer their own.

Novelist John Burnham Schwartz’s father was in fact the young lawyer who escorted Svetlana Alliluyeva to the United States. Drawing upon private papers and years of extensive research, Schwartz imaginatively re-creates the story of an extraordinary, troubled woman’s search for a new life and a place to belong, in the powerful, evocative prose that has made him an acclaimed author of literary and historical fiction.

Praise for The Red Daughter

“Svetlana Alliluyeva’s life was endlessly fascinating, often heartbreaking, and ultimately heroic. I don’t think any writer alive could have told her story more beautifully than John Burnham Schwartz.”—David Benioff, co-creator of HBO’s Game of Thrones and author of City of Thieves

“The Red Daughter is an intimate, intricate look at the collision of geopolitics with a private life: surprising and engaging from beginning to end.”—Jennifer Egan

An excerpt from The Red Daughter

The Private Journals of Svetlana Alliluyeva

My father would have had me killed for what I’ve done. And then he never would have given me another thought.

People believe that because my mother died how and when she did, and because my father became what he became, that he alone must be the mountain in my life—­the immovable object that I can neither climb nor see around.

Why I have made this choice to abandon my two children and my home to wake in this foreign darkness, in this strange country, in a stranger’s strange house.

But people are wrong. They will always be wrong. My father is not the mountain.

The mountain is my mother.

Instead of actual memories I’m left only with impressions, stolen from photographs or the odd letter, of a strong dark-­haired young woman with a wide oval face, full mouth, and the saddest eyes I have ever seen. When she was angry or disappointed, it could be as if a translucent shutter had slid down over those eyes, a shutter not from outside but from within her; I remember feeling a terrible cold distance where I wished she had been. I remember her voice saying to my brother Vasily and me, The more time you have, the lazier you are. I remember her rapping my knuckles raw one day when she discovered that I’d cut up her new tablecloth with a pair of shears. I remember almost never being with her, yet sensing her firm committed presence everywhere I turned, an omnipresent shadow that I could see but not hold. I remember the scent of her French perfume—­which my father hated, since it was a luxury, and which she wore anyway, fiercely protective of this one personal indulgence—­still lingering on my pillow the mornings after those very rare nights when she would stay with me and stroke my head as I fell asleep.

Nadezhda Alliluyeva met Josef Stalin when he was twenty-­five and she was a toddler of two; he was a family friend, so the story went, and saved little Nadya from drowning. She wouldn’t see him again until she was sixteen; by then she was at least as devout a Communist as he was, as well as beautiful and fearless. And he was a hero to many. Yes, in those days of Civil War following the Bolshevik victory, when the fate of the Great Revolution was still uncertain, my father was in the throes of establishing himself as Lenin’s Man of Steel. He asked Nadya to accompany him to Tsaritsyn (soon to be Stalingrad) as his personal secretary, an offer she accepted without hesitation, since she was probably already in love with him.

Two years later, in the thick of the growing cult of violence of which my father was the unquestioned conductor, they were married.

I was six months old when she first tried to leave him. This was in 1926, and her disillusionment over what he was then becoming must have been profound. She and my nurse packed up five-­year-­old Vasily and me and piled us all onto a train to Leningrad, where we moved in with my grandparents. We would start new lives, free of his tyranny! Yet several days later, when my father telephoned, beside himself, enraged, beseeching, threatening to come fetch us himself, my mother quickly relented, all the while insisting that we would return by ourselves, without his bloody help, so as to save the cost to the State.

Until I was sixteen, I was led to believe that her sudden death on the night of 8 November, 1932, was caused by a ruptured appendix. I was not alone: the entire nation believed this.

Then one day, ten years after the fact, I happened across an article in a British magazine that referred to my mother’s death as a suicide. Joseph Stalin’s second wife, I read, had shot herself in the head in her bedroom, where she had gone after my father publicly humiliated her at a state dinner. And this had always been known by certain people in my father’s inner circle, it was reported, including my dear nurse, Alexandra Andreevna, who had raised me from the moment I was born.

I went straight to my nurse and demanded that she tell me everything she knew about my mother’s death. Weeping from shame and grief, Alexandra Andreevna did as I asked. And so I learned not only that the magazine article was true but that my mother had left behind a suicide note for my father in which she called him a monster and a murderer. Those had been her exact words. She had cursed him and declared that she would never forgive him for destroying the soul of the Party and, with it, her hope for a better world for her and her children. Then she had shot herself and left her dead body for him to find.

I am playing outside by myself one morning when my nurse approaches, kisses my forehead, says, Come, we must put on different clothes now. And in these different clothes I am driven in a state car to an official building in Moscow, a large hall with a ceiling like a reaper’s blade overhead, where many adults, some of them acquaintances and relatives I recognize, stand in hushed black poses. I am taken by the hand, led through ghoulish, whispering silhouettes to a long black box the length and width of a grown-­up person. The box has a carved lid on hinges, propped open. I see blood-­red silk, unfamiliar clothing, and my mother’s ghost-­white face—­

I step back and begin to scream.

John Burnham Schwartz is the author of five acclaimed novels, including The Commoner, Claire Marvel, Bicycle Days, and Reservation Road, which was made into a motion picture based on his screenplay. His books have been translated into two dozen languages, and his writing has appeared in many publications, including The New Yorker and The New York Times. A winner of the Lyndhurst Foundation Award for mastery in the art of fiction, Schwartz has taught at the Iowa Writers’ Workshop, Harvard University, and Sarah Lawrence College, and is currently literary director of the Sun Valley Writers’ Conference. He lives in Brooklyn, New York, with his wife, Aleksandra Crapanzano, and their son, Garrick. 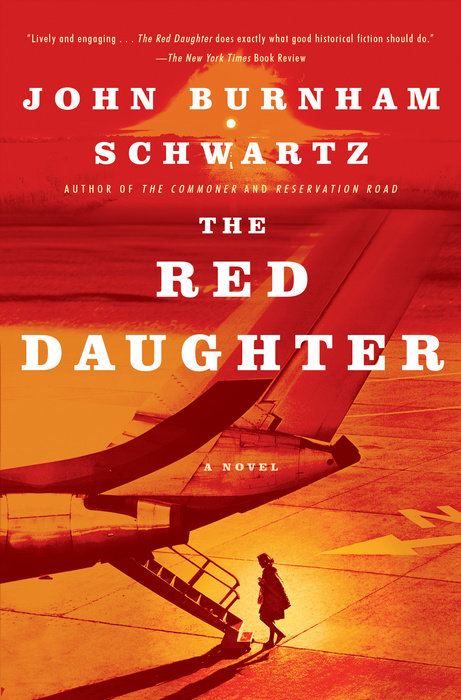