After Nature, W. G. Sebald’s first literary work, now translated into English by Michael Hamburger, explores the lives of three men connected by their restless questioning of humankind’s place in the natural world. From the efforts of each, “an order arises, in places beautiful and comforting, though more cruel, too, than the previous state of ignorance.” The first figure is the great German Re-naissance painter Matthias Grünewald. The second is the Enlightenment botanist-explorer Georg Steller, who accompanied Bering to the Arctic. The third is the author himself, who describes his wanderings among landscapes scarred by the wrecked certainties of previous ages.

After Nature introduces many of the themes that W. G. Sebald explored in his subsequent books. A haunting vision of the waxing and waning tides of birth and devastation that lie behind and before us, it confirms the author’s position as one of the most profound and original writers of our time.

An excerpt from After Nature

Whoever closes the wings

of the altar in the Lindenhardt

parish church and locks up

the carved figures in their casing

on the lefthand panel

will be met by St. George.

Foremost at the picture's edge he stands

above the world by a hand's breadth

and is about to step over the frame's

of ore, red-golden hair and silver

feminine features. The face of the unknown

in his work as a witness

to the snow miracle, a hermit

in the desert, a commiserator

in the Munich Mocking of Christ.

Last of all, in the afternoon light

in the Erlangen library, it shines forth

from a self-portrait, sketched out

by an alien hand's pen and wash,

as that of a painter aged forty

to fifty. Always the same

gentleness, the same burden of grief,

the same irregularity of the eyes, veiled

and sliding sideways down into loneliness.

in a Basel painting by Holbein

the Younger of a crowned female saint.

These were strangely disguised

whose books were burned by the fascists.

Indeed it seemed as though in such works of art

often made monuments in each other's

image where their paths had crossed.

Hence too, at the centre of

that troubled gaze upon the youth

on the other side of the older man

whom, years ago now, on a grey

January morning I myself once

encountered in the railway station

in Bamberg. It is St. Dionysius,

his cut-off head under one arm.

To him, his chosen guardian

who in the midst of life carries

his death with him, Grünewald gives

the appearance of Riemenschneider, whom

condemned to the breaking of his hands

in the torture cell. Long before that time

pain had entered into the pictures.

That is the command, knows the painter

who on the altar aligns himself

with the scant company of the

fourteen auxiliary saints. Each of these,

the blessed Blasius, Achaz and Eustace;

Erasmus and the truly beautiful

St. Vitus with the cockerel,

each look in different

why. The three female saints

Barbara, Catherine and Margaret on

the other hand hide at the edge

of the left panel behind the back of

St. George putting together their

a conspiracy against the men.

The misfortune of saints

is their sex, is the terrible

separation of the sexes which Grünewald

suffered in his own person. The exorcised

devil that Cyriax, not only because

of the narrow confines, holds raised

high as an emblem in

the air is a female being

and, as a grisaille of Grünewald's

in the Frankfurt Städel shows in

the most drastic of fashions, derives from

the misshapen princess Artemia whom

Cyriax, as beside him she kneels on

with a maniple of his vestments

above them is the branch work

of a fig tree with fruit, one of which

is entirely hollowed out by insects. 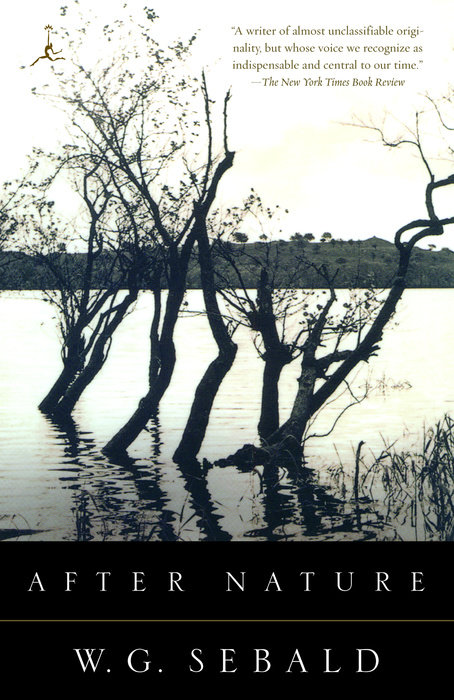