“Lisa See begins to do for Beijing what Sir Arthur Conan Doyle did for turn-of-the-century London or Dashiell Hammett did for 1920s San Francisco: She discerns the hidden city lurking beneath the public facade.”
–The Washington Post Book World

In the depths of a Beijing winter, during the waning days of Deng Xiaoping’s reign, the U.S. ambassador’s son is found dead–his body entombed in a frozen lake. Around the same time, aboard a ship adrift off the coast of Southern California, Assistant U.S. Attorney David Stark makes a startling discovery: the corpse of a Red Prince, a scion of China’s political elite.

The Chinese and American governments suspect that the deaths are connected and, in an unprecedented move, they join forces to see justice done. In Beijing, David teams up with the unorthodox police detective Liu Hulan. In an investigation that brings them to every corner of China and sparks an intense attraction between the two, David and Hulan discover a web linking human trafficking to the drug trade to governmental treachery–a web reaching from the Forbidden City to the heart of Los Angeles and, like the wide flower net used by Chinese fishermen, threatening to ensnare all within its reach.

“A graceful rendering of two different and complex cultures, within a highly intricate plot . . . The starkly beautiful landscapes of Beijing and its surrounding countryside are depicted with a lyrical precision.”
–Los Angeles Times Book Review

“Murder and intrigue splash across the canvas of modern Chinese life. . . . A vivid portrait of a vast Communist nation in the painful throes of a sea change.”
–People

“Fascinating . . . that rare thriller that enlightens as well as it entertains.”
–San Diego Union-Tribune

An excerpt from Flower Net

Wing Yun held tightly to his granddaughter’s mittened hand as he guided her in slow rhythmic glides across the frozen expanse of Bei Hai Lake just outside the burnished walls of the Forbidden City. On the opposite shore, Wing Yun could see the Beijing City Young People’s Speed Skaters hard at their interval training. Behind the team, shrouded in a haze of coal smoke and heavy gray clouds, he saw the Five Dragon Pavilion and the Hall of Celestial Kings. Nearby, along the walkways surrounding the lake, old people swept last night’s dusting of snow with bamboo brooms. Based on the solidity of the ice beneath the blades of his old skates and the way the air billowed and steamed with every breath he took, Wing Yun guessed that it must be –15 degrees Celsius. And this was as warm as it would get today.

Wing preferred to stay on this side of the lake just inside the main entrance to the park, where the old Round City curved around what had once been a fortress protecting the residence of Kublai Khan. Very close to shore and accessible by footbridge was Jade Island. In summer, Wing Yun liked to stroll along its covered pathways, stopping at the sheltered pavilions along the way. If it wasn’t too hot or humid, he might climb to the top of the hill to the White Dagoba, an onion-shaped shrine built in the Tibetan style to honor the first visit of the Dalai Lama in 1651.

Wing Yun kept his granddaughter in the area near the loudspeakers. Old-fashioned dance music drifted across the frozen expanse. Here and there, twosomes tangoed and waltzed. Other young couples giggled together. A few even held hands, and Wing Yun thought, Ah, how life is changing. When I was young, no one, no one, could hold hands in public. Even now he wondered what the parents of these couples would think if they saw their children acting so brazenly in front of—well, in front of so many citizens. Nearby, families—mama, baba, grandparents, aunts, uncles, and many children—laughed and teased one another. They made picturesque tableaux, bundled in old-style padded blue jackets and brightly colored Western-style coats, mittens and mufflers. Many of the younger children—still struggling to find their balance—held on to wooden chairs outfitted with runners. Seated on these chairs, grandparents beamed as their grandchildren pushed them along.

Wing Yun was familiar with many of the skaters, but today, as usual, a few strangers tried this bit of exercise for the first time. He and his granddaughter had nearly been knocked over by two uniformed soldiers. Wing Yun didn’t scold them as he might have. He could see they were just country boys, perhaps peasants from South China. They had probably never seen snow and ice before.

Wing Yun and Mei Mei had spent many days together here this winter. She was a good companion for him. She didn’t mind quiet and often seemed as engrossed in her own thoughts as he was in his. Right now, he could feel her fingers moving inside her mitten. She wanted to skate out on her own, but he was reluctant to loosen his grip.

She looked up at him, and he had to push her scarf down so he could see her cheeks flushed pink by the cold. She smiled at him, then began to sing “Nine Nine,” which recounted the nine phases of winter and cautioned the listener about the season’s dangers. He could remember the song from his own childhood; it was familiar to anyone raised on the North China Plain.
“One nine, two nine: hands can’t show,” she began, her voice as crisp as the afternoon air. “Three nine, four nine: on ice go. Five nine, six nine: river willows seen. Seven nine: ice crack! Eight nine: swallows back.”

Wing Yun joined in for the last line. “Nine nine and one nine more, oxen in fields encore.” The last notes faded into the icy quiet, then Wing Yun asked, “What ‘nine’ are we in, Mei Mei?”

“Three nine, because the ice is good and we can skate.”

“That’s right. And what will happen at seven nine?”

“Grandpa!” she said indignantly. “I promise not to skate then. I always tell you that.”

“I just want you to be careful,” he said. “Now, do you think you’re ready to go by yourself?”

A shy smile crept across her features, and he watched as she took a deep breath of anticipation. Then he pulled to a stop and released her mittened hand. With her narrow ankles wobbling, she edged out on her own. With each stride, she grew more confident.

“Don’t go too close to the middle,” he called out, though he knew that at this “three-nine” time in January it was perfectly safe. Still, his granddaughter slowed, then set off toward a deserted area of the lake near the shore. As Wing Yun followed, he noticed how few grooves there were here in the ice. Funny, he thought, how people like to stick together—the racing team so far away, the families gathered in groups near the main gate and no one in between.

Just as Mei Mei neared the bank, she lost her balance. Her arms flailed about her for a moment as she tried to regain her equilibrium. Then she fell forward, hard. Wing Yun hesitated. Would she cry?

The little girl sat up, stared at the ice before her, and began a high-pitched wail that cut through the romantic waltz music, the soft conversations of young lovers, and the jovial teasing of the family groups. Wing Yun skated quickly to his granddaughter. Once he reached her side, he, too, wanted to scream. Before his granddaughter, a man lay embedded in the ice. He stared up at Wing Yun and Mei Mei, wide-eyed but unseeing. He was a white ghost, a foreign devil, a white man.


Two hours later, Liu Hulan arrived on the scene. The atmosphere had changed dramatically since the body had been discovered. All of the skaters were off the ice and being held as witnesses in one of the pavilions on the shore. Local police guarded the perimeter of the crime scene. Within their loose circle, Hulan could see other men in plainclothes, some looking for evidence, others standing and talking to a citizen and a small child. At the very center of the circle, a man hunched over a dark shape lying next to a small mound of what appeared to be shaved ice. Liu Hulan sighed, pulled her scarf and the collar of her lavender down coat up over her ears, and set out across the ice.

She seemed oblivious to the ripple her arrival caused among the men. If they could have gotten their nerve up to say what attracted their attention to her, they might have pointed out that she was too beautiful for her job, that she dressed differently from other women they knew, that she was vain, that she always held herself apart. In just a few answers the men would have moved from the hazardous territory of sex to the safe realm of political criticism that they knew so well.

It would have been easy to attack her on her physical presentation, except that she didn’t seem particularly interested in the Western-style fashions that had been available in the city in recent years. She preferred to wear pre-Revolutionary clothes: long skirts tailored to fit her sleek shape and cream-colored embroidered silk blouses of antiquated Chinese cut that crossed at her breast. In winter she added cashmere sweaters made in villages along the Mongolian border and dyed to soothing tones of coral, aqua, and winter white. These colors set off her complexion in ways that brought to mind all the time-honored descriptions of women in China: Her skin was as translucent as fine porcelain, as delicate as the rose petal, as soft as a good-luck peach.

Liu Hulan would have laughed at any such comparisons. She dismissed her beauty. She never wore makeup. She didn’t perm her black hair, wearing it, instead, in a blunt cut that reached just below her shoulders. It was always slipping forward over her ears in silky waves. A few strands always seemed to stick straight out from her head as though electrified. More than one man had wanted to run his hands through them. But none of her male colleagues would have ever risked touching, even casually, Inspector Liu Hulan.

As she reached the circle, she held up her credentials from the Ministry of Public Security and was waved through. Walking these last few steps, she braced herself for what she would see. She had been with the MPS for eleven years now but still had not hardened herself completely to the sight of the dead, especially those who had died violently.

Fong, the pathologist, looked up from the body. “Another pretty one for you, Inspector,” he said, grinning.

Lisa See is the New York Times bestselling author of China Dolls, Dreams of Joy, Shanghai Girls, Peony in Love, Snow Flower and the Secret Fan, Flower Net (an Edgar Award nominee), The Interior, and Dragon Bones, as well as the critically acclaimed memoir On Gold Mountain. The Organization of Chinese American Women named her the 2001 National Woman of the Year. She lives in Los Angeles. 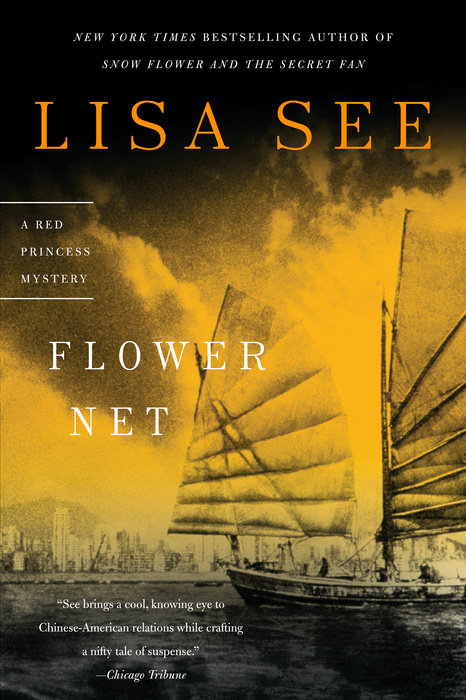