“See paints a fascinating portrait of a complex and enigmatic society, in which nothing is ever quite as it appears, and of the people, peasant and aristocrat alike, who are bound by its subtle strictures.”—San Diego Union-Tribune

While David Stark is asked to open a law office in Beijing, his lover, detective Liu Hulan, receives an urgent message from an old friend imploring her to investigate the suspicious death of her daughter, who worked for a toy company about to be sold to David’s new client, Tartan Enterprises.

Despite David’s protests, Hulan goes undercover at the toy factory in the rural village of Da Shui, deep in the heart of China. It is a place that forces Hulan to face a past she has long been running from. Once there, rather than finding answers to the girl’s death, Hulan unearths more questions, all of which point to possible crimes committed by David’s client. Suddenly Hulan and David find themselves on opposing sides: One of them is trying to expose a company and unearth a killer, while the other is ethically bound to protect his client. As pressures mount and danger increases, Hulan and David uncover universal truths about good and evil, right and wrong–and the sometimes subtle lines that distinguish them.

Praise for The Interior

“[See] illuminates tradition and change, Western and Eastern cultural differences. . . . All this in the middle of her thriller which is also about greed, corruption, abuse of the disadvantaged, the desperation of those on the bottom of the food chain, and love.”—The Tennessean

“Sophisticated . . . graceful . . . See’s picture of contemporary China’s relationship with the United States is aptly played out through her characters.”—Los Angeles Times

An excerpt from The Interior

This morning, as every morning this summer in Beijing, Liu Hulan woke before dawn to the deafening sounds of drums, cymbals, gongs, and, worst of all, the horrible squeals of a suo-na, a many-piped wind instrument that resounded for blocks, maybe even miles. Competing to be heard over the instruments were the exuberant voices, cheers, and yelps of the Shisha Hutong Yang Ge Folk Dance and Music Troupe. This was the beginning of what would be a three-hour session, and this morning it appeared to be taking place directly outside Hulan’s family compound.

Hulan hurriedly wrapped her silk robe around her, slipped on a pair of tennis shoes, and stepped outside onto the covered veranda outside her bedroom. Though it was only four, the air was already thick as custard with heat, humidity, and smog. Once the summer solstice passed, Beijingers prepared for the arrival of Xiao Shu, or Slight Heat Days. But this year Da Shu, Great Heat, had come early. This past week had seen five straight days with temperatures over forty-two degrees centigrade and humidity hovering at about ninety-eight percent.

Hulan quickly crossed the innermost courtyard, passing the other pavilions where in the old days the different branches of her extended family had lived. On the steps of one of these, her mother’s nurse—already dressed in simple cotton trousers and a short-sleeve white blouse—waited for her. “Hurry, Hulan. Make them stop. Your mother is bad this morning.” Hulan didn’t respond, she didn’t need to. She and the nurse had followed this routine now for the past three weeks.

Hulan reached the first courtyard, pushed open the gate, and stepped into the alleyway that ran before her family compound. There were perhaps seventy people here, all of them senior citizens. Most were dressed in pink silk tunics, while a few wore electric green. The latter, Hulan had learned a week ago, had come from the Heavenly Gate Dance Brigade after an argument about who would lead the dancing in their own neighborhood. The people looked colorful and—Hulan had to admit it—rather sweet in their costumes: Sequins decorated their fans, while glittering tinsel and tufts of white fluff fluttered in time to the music. The bodies of the old people happily gyrated to the drums and cymbals in a dance that was a cross between the bunny hop and the stroll.

“Friends, neighbors,” Hulan called out, trying to be heard, “please, I must ask you to move.” Of course no one paid her any attention. Hulan stepped into the dancers just as they began marching out of their circle and into rows.

“Oh, Inspector! Beautiful morning!” This greeting came from Ri Lihan, a woman in her eighties who lived five compounds away. Before Hulan could respond, Madame Ri twirled away.

Hulan tried to stop first one, then another dancer, but always they slipped past, laughing, their wrinkled faces flushed and sweaty. Hulan made her way through the dancers to the musicians. The cheeks of the man blowing on the suo-na were puffed out and red. The sound emanating from that instrument was high, loud, and discordant. Speech was impossible, but when the musicians saw Hulan pat at the pockets of her robe, they exchanged knowing glances. They had seen their neighbor, Liu Hulan, do this before. She was looking for her Ministry of Public Security identification, but, as was so often the case on these early morning excursions, she had left it behind. The musicians beamed and nodded agreeably to the inspector.

Still clanking, drumming, and blowing, the musicians slowly set off down the alley. Following this cue, the old folks—continuing their dancing rhythm—filed past Hulan. She waited for Madame Zhang to pirouette by, but when she didn’t Hulan walked to the old woman’s home, silently cursing this current wave of nostalgia to sweep through the city. One month it was restaurants celebrating “the long-past good days” of the Cultural Revolution; the next month there was a run on collectible Mao buttons. One month there was a craze for Western-style white wine mixed with Coca-Cola and ice; the next month old people were bringing their rumpled yang ge costumes and instruments out of trunks and closets and taking to the streets like a bunch of teenagers.

Yang ge music had originated among the peasants of China’s northeast and had been brought to Beijing by the People’s Liberation Army in 1949. Now, after years of deprivations and political upheavals, the old people had resurrected twin passions—dancing and singing. The only problems—and they were big ones as far as Hulan was concerned—were the time of day and the noise. China, although a large country, operated on one time zone. While in the far west farmers might not go to their fields until the sun came up at nine, in Beijing the day started unconscionably early. Psychologically Hulan hated waking up before six, let alone four in the morning, to the ungodly racket of the yang ge troupe.

This constant clamoring had also been extremely upsetting to Hulan’s mother. Rather than filling Liu Jinli with sentimental longings or carefree memories, these raucous sounds made the older woman quite querulous. Since the Cultural Revolution, Jinli had been confined to a wheelchair and still suffered from bouts of catatonia. During the first weeks that she’d come back to the quiet of the hutong, her health had improved considerably. But with the yang ge music stirring up the past, Jinli’s condition had once again spiraled downward. Which was why Hulan had gone several times already this summer to Neighborhood Committee Director Zhang to register complaints. But the old woman, whose duty it was to keep tabs on the comings and goings of the residents of this Beijing neighborhood, had joined the troupe herself and for once seemed completely immune to Hulan’s imprecations.

“Huanying, huanying,” Madame Zhang Junying said automatically, opening the door to Hulan. Then, seeing how her neighbor was dressed, the older woman quickly pulled Hulan inside. “Where are your day clothes? You are trying to scare the neighbors?”

“There’s nothing to see that they haven’t seen before,” Hulan said, pulling her robe more tightly around her.

Madame Zhang considered these words, then said, “For most people this is true. After all, what surprises can any of us have? But with you …” The Committee director shook her head in a maternal show of disapproval. “Come sit down. Will you drink tea?”

But Madame Zhang would have none of it. “Sit down here. You pour. I’ll put these papers away.” As Hulan did as she was told, the old woman continued, “Today no fun for me. I have to file my report. So much paperwork, right, Hulan?”

“I have something for you to add to your report.”

“Don’t worry,” the Committee director chortled. “I have already put in your complaints. Formal, as you requested.”

“Then why isn’t anything done?”

“You think you are the only one to complain? Remember that hot line the government set up for people to call? They got almost two thousand calls the first day. Then they turned off the phone!” Madame Zhang clapped her hands on her knees.

“The musicians are not supposed to be near residences …”

“Or hospitals. I know. You don’t have to tell me. But you must look on the positive side. We are together maybe sixty thousand old people in different dance troupes. We are going outside the house and giving young people time at home alone. Daughters-in-law are happy. Sons are happy. Maybe next year we get a grandchild or great-grandchild—”

“But do they have to do it so early in the morning?”

“At this Madame Zhang put her head back and laughed and laughed. “This is summer, Hulan. We are in Beijing. What is the temperature at this hour? Thirty-eight degrees centigrade? The people want to practice early before it gets too hot.”

The old woman watched Hulan’s face as she struggled to come up with another argument. Finally Madame Zhang leaned over and put a hand on Hulan’s knee. “I know this must be hard for your mother. But she is just one person, and the people want to have fun.” Her voice changed, becoming gruffer, deeper. “We all went through so much. We just want to enjoy the rest of our lives.”

Later, as Hulan walked back to her compound, she thought over Madame Zhang’s words. It was true, they’d all been through so much, too much really. In China the past would always be a part of the present. But unlike her neighbors, Hulan had the money and connections to make sure her family could escape it on occasion. And so Hulan made a plan. When she reached the Liu compound she went directly to her mother’s quarters. The nurse had dressed Jinli, who now sat in her wheelchair. Her eyes were red and swollen from crying. Hulan tried to speak to her, but Jinli had retreated into silence. Hulan sat on the bed, dialed the phone, and made arrangements to send her mother and her nurse to the seaside resort of Beidaihe. They would be cooler there and away from the disturbing sounds of the yang ge troupes.

When Hulan was done, she carefully explained everything to Jinli, knowing that she might not understand anything that was said. Then Hulan kissed her mother, gave a few last instructions to the nurse, and made her way back to her own quarters.

Lisa See is the New York Times bestselling author of China Dolls, Dreams of Joy, Shanghai Girls, Peony in Love, Snow Flower and the Secret Fan, Flower Net (an Edgar Award nominee), The Interior, and Dragon Bones, as well as the critically acclaimed memoir On Gold Mountain. The Organization of Chinese American Women named her the 2001 National Woman of the Year. She lives in Los Angeles. 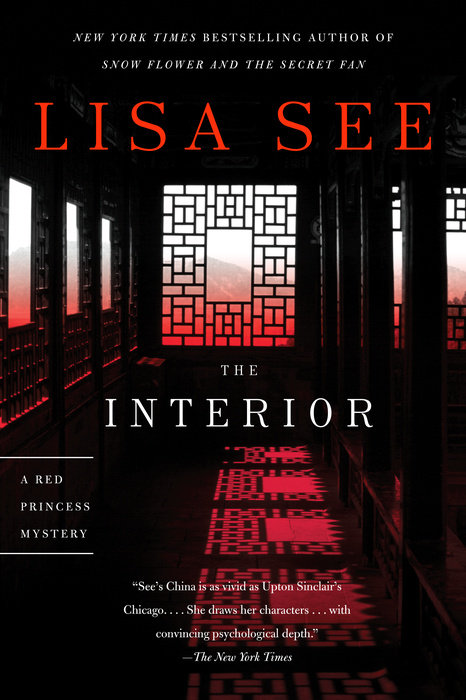