A Novel of the Mexican War

In this stunning, unforgettable novel, Jeff Shaara carries us back thirteen years before the Civil War, when that momentous conflict's most familiar names are fighting for another cause, junior officers marching under the same flag in an unfamiliar land, experiencing combat for the first time in the Mexican-American War.

"BRILLIANT DOES NOT EVEN BEGIN TO DESCRIBE THE SHAARA GIFT."
--Atlanta Journal-Constitution

SHAARA RELIES "ON THE HISTORY BEHIND THE MEN AND THEIR CAMPAIGNS TO TELL THE TALE. . . . Most poignant of all is the appearance of so many characters who will fight under opposing flags 13 years later. Stonewall Jackson shows up as a humorless young lieutenant with a spiritual reverence for his artillery, and Ulysses S. Grant awkwardly meets [Robert E.] Lee. . . . The salvaging of such episodes from history is ultimately a patriotic task, deserving of gratitude."
--The Washington Post Book World

"COMPELLING . . . THRILLING . . . Shaara briskly drives the U.S. forces to Mexico City, building suspense at each battle, all towards the climactic storming of the gates of the capital. . . . [He] has humanized the mythos of Lee as no one ever has and, in doing, makes an enduring contribution to literature."
--Civil War Book Review

"SHAARA, AS USUAL, IS AT HIS BEST IN ACTION AND CONFRONTATION AND IN EVOKING HOW IT FELT TO BE THERE."
--The Philadelphia Inquirer

An excerpt from Gone for Soldiers

IN 1844 THE UNITED STATES IS VERY MUCH A NATION FEELING ITS youth. Since the country was doubled in size by the Louisiana Purchase, there has been a passion for expansion, for pushing the boundaries farther west, a mission to bring the new enlightenment of the "American Ideal" to the entire continent. To politicians in Washington, this expansion is justified not just by an enthusiasm for our system of government, but by official policy. The document is the Monroe Doctrine, and the rallying cry becomes Manifest Destiny, as though it is not only in the nation's best interests to expand our influence, but the best interest of anyone whose culture we might absorb. This practice has already resulted in bloody conflict with several Indian Nations, notably the Seminoles in Florida. It also leads to a showdown with the British over the Oregon Territory, a threat the British defuse by backing away.

In summer 1844 the independent nation of Texas is annexed by the United States. The territory of Texas had been part of Mexico itself, only became independent in 1836 when Mexican leader Antonio Lopez de Santa Anna was defeated by Sam Houston at the Battle of San Jacinto. This defeat followed Santa Anna's highly publicized massacre of the defenders of the Alamo, in San Antonio.

To the Mexican government, led by the moderate General José Joaquin de Herrera, the loss of Texas is a severe blow to Mexican pride. While Herrera favors negotiation to resolve differences, specifically the growing border disputes, loud voices of ultrapatriotism within his country consider the loss an outrage, an assault on the sovereignty of Mexico, which must be avenged.

In December 1844, Texas is officially granted statehood. The decision is controversial. Because it was admitted as a slave state, many in the north opposed Texas's inclusion. However, as a necessary ingredient of Manifest Destiny, even opponents concede that the land, and the passion for expansion, make Texas a valuable treasure.

The Texans consider their border to extend to the Rio Grande River. To the Mexicans, Texas stops at the Nueces River, some one hundred miles farther north. The land in between the two rivers is mostly barren and uninhabited, but both sides begin making moves to secure the land for their own cause.

To protect the new wave of citizens that move into the disputed area, President James K. Polk sends a military force of nearly three thousand men, under the command of General Zachary Taylor. This so inflames the spirits of many Mexicans that Herrera cannot hold power, and he is replaced by General Mariano Padredes, an ultrapatriot who immediately declares that Mexico is in a state of "defensive war" with the United States.

As the wheels of war grind forward, neither side seems to understand the forces driving the other. The Mexicans are far from accepting Manifest Destiny as legitimate, and the Polk Administration has no grasp of the nationalism and fiercely proud protectionism that so motivates the Mexicans.

As Taylor's forces move into the disputed territory between the two rivers, Mexican General Ampudia marches troops northward, intending to turn Taylor away. While politicians in both capitals seem helpless to find some middle ground, some way of avoiding the inevitable war, Taylor confronts a sizable Mexican force at Palo Alto, a small crossroads village. The resulting fight is the first engagement of the war, and is a decided victory for Taylor and the Americans. The Mexicans retreat to a strong defensive position at an old riverbed called Resaca de la Palma. Taylor pursues, and defeats the Mexicans again. The Mexican forces have no choice but to retreat below the Rio Grande.

With the spilling of blood, the disputes move beyond the angry protests of politicians. The diplomatic wrangling gives way to the harsh reality that the dispute over boundaries and the inability of each culture to understand the customs and needs of the other, has but one possible outcome. Even the voices of reason in both capitals are powerless to stop the momentum. On May 13, 1846, President Polk convinces Congress to declare war on Mexico.

THEY HAD SAILED EARLY, CUTTING SOUTHWARD THROUGH THE quiet water, the rugged coastline barely visible to the west. Lee had moved to the bow of the tall ship, staring out quietly, tasting the salt air, the cool wind that pushed into the great sails above him. At first he was alone, but then more of the officers were moving forward, and like Lee, they stared to the front, watching for any sign, the first glimpse of the rest of the great fleet.

Lee glanced to one side, saw a small figure, thought, My dear friend Joe ... you look awful. He would never say that to the man's face, knew Johnston was embarrassed, sensitive about his seasickness. The agony had been on Johnston's face even before the ship had left Tampico, and it made no difference if the weather rolled them about or, like this morning, was ghostly calm. Joe Johnston would never be a sailor.

Lee moved toward him, eased along the heavy wood rail. "You all right, Captain?"
Johnston, weary, his eyes heavy, looked at Lee, nodded, said nothing. Lee glanced at the dome of exposed scalp on Johnston's head, looked away, would not let his friend catch him staring. He knew Johnston was a vain man, frustrated with the baldness that had shown itself when he was still young. He had a small frame, thin, and some at the Point had even used the word fragile to describe him. It had made Johnston furious, and Lee knew his vanity had been a form of self-defense. Johnston had begun to comb his hair straight forward, covering his high forehead. But today there was none of the self-consciousness, and Lee could not be pleased about that, knew it meant that Johnston was feeling sick indeed.

Lee, still looking away, pointed out beyond the bow. "We'll be there soon I think. The masts should come into view first."

Johnston nodded, looked now toward the horizon, his expression a mix of hope and a silent plea for the trip to end.

Lee put a hand on Johnston's shoulder, felt the rough wool of Johnston's coat, felt Johnston sag beneath his grip. He pulled his hand away, thought, Maybe best to just let him be. He leaned out again on the rail, and now the sun had come up, full above the flat ocean to the east. He looked toward the warmth, felt the energy, felt a light salty breeze drifting across the deck. There was a new sound now, birds, the high call of the gulls, gathering, dancing in the air, near the stern of the ship. He looked up, smiled slightly, stared into the deep blue of a cloudless perfect morning. Suddenly there was a voice, behind him, high up on the lookout.

The men around Lee pressed forward, and Lee stared again to the front, saw now a fleck of orange, a brief flicker of sunlight reflecting on ... something. The others saw it as well, the soldiers betraying their excitement, while all around them the sailors seemed only to do their work, and if they paid any attention at all to what lay in front of them, they would not reveal it to these men who fought on land.

Lee saw more reflections now, and someone had a pair of field glasses, passed them along the rail, and as each man took his turn, there was a smile, a small sound, recognition. Now the glasses came to Lee, and he raised them up, and the flecks of light were suddenly clear. He felt his heart thump hard in his chest, could not help but smile, thought,Yes, a ship! He lowered the glasses, offered them to Johnston, who took them and without looking, passed them along. Lee wanted to say something, encourage his friend, to help him put the sickness aside somehow. Still Lee's attention was drawn to the front, where there were a great many more reflections, and it did not take the glasses to see that before them, spread across the wide gulf, was an enormous fleet.

The first big ship was plainly visible now, and Lee could feel the Massachusetts turning, the helmsman steering General Winfield Scott's flagship to a path closer to the warships. Lee was still feeling the excitement, examined the big ship as though he were a small child. He was stunned by the size, the great rows of small black eyes, the enormous firepower of the big man-of-war. He had seen ships like this before, near the forts in the East, but this was very different, moving past so close, the view from the deck of another great ship, so near the mouths of all those guns. Lee stared into the open gun ports, felt a sudden chill. My God, he thought, the pure power. So much artillery in one place. He had never seen a naval bombardment, certainly had never seen two great ships at war, swirling around each other in a violent fury of sound and smoke. He blinked, thought, No, you have never seen much of anything to compare to this.

A Novel of the Mexican War 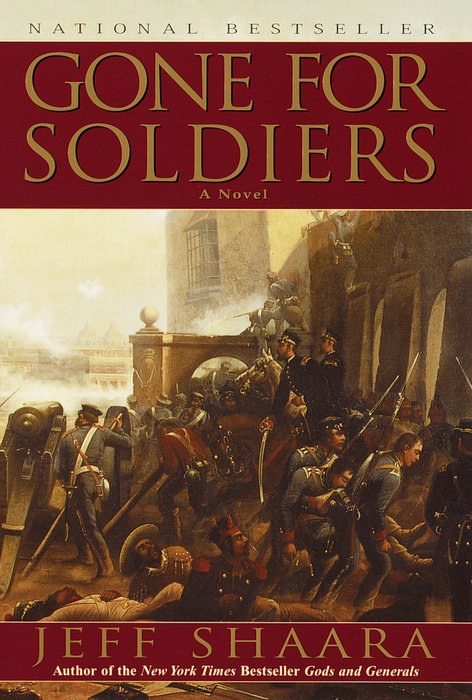