Mapping Your Life Across Time

THE #1 NEW YORK TIMES BESTSELLER
Millions of readers literally defined their lives through Gail Sheehy's landmark bestseller Passages. Seven years ago she set out to write a sequel, but instead she discovered a historic revolution in the adult life cycle. . .
People are taking longer to grow up and much longer to die. A fifty-year-old woman--who remains free of cancer and heart disease-- can expect to see her ninety-second birthday. Men, too, can expect a dramatically lengthened life span. The old demarcations and descriptions of adulthood--beginning at twenty-one and ending at sixty-five--are hopelessly out of date. In New Passages, Gail Sheehy discovers and maps out a completely new frontier--a Second Adulthood in middle life.
"Stop and recalculate," Sheehy writes. "Imagine the day you turn forty-five as the infancy of another life." Instead of declining, men and women who embrace a Second Adulthood are progressing through entirely new passages into lives of deeper meaning, renewed playfulness, and creativity--beyond both male and female menopause. Through hundreds of personal and group interviews, national surveys of professionals and working-class people, and fresh findings extracted from fifty years of U.S. Census reports, Sheehy vividly dramatizes these newly developing stages. Combining the scholar's ability to synthesize data with the novelist's gift for storytelling, she allows us to make sense of our own lives by understanding others like us.
New Passages tells us we have the ability to customize our own life cycle. This groundbreaking work is certain to awaken and permanently alter the way we think about ourselves.
"SHEEHY CLEARLY STATES IDEAS ABOUT LIFE THAT HAVE NEVER BEFORE BEEN AS CLEARLY STATED."
--Los Angeles Times Book Review
"AN OPTIMISTIC ANALYSIS OF ADULT DEVELOPMENT IN PESSIMISTIC TIMES. . . It is grounded in the economic and psychological realities that make adult life so complex today."
--The New York Times Book Review

An excerpt from New Passages

The playing field is quite different for each generation when its young members start the journey into adulthood. The point where you and your friends came in on your cultures history has influenced your choices and attitudes. That distinctive generational coloration affects each stage of life and the passages between them, profoundly influencing which tasks of development you accomplish early, which you postpone, and which you will have to catch up on—or may never complete.

WHICH GENERATION ARE YOU TRAVELING WITH?

I invite you to join me in mapping your own life across time. Five different generations now occupy contemporary adulthood, spanning birth dates from 1914 to 1980. You will probably find your peer traveling companions among the capsule descriptions of those five generations in this chapter.

To represent each one, I have selected five birth years that make up a definable “cohort group,” a sociological term that refers to people who will always share a common location in history. (See Key to Your Cohort chart.) Not only were members of any cohort born within the same few years, but they have experienced defining events when they were the same age. Economic and social conditions along with technological and medical advances have either sped up or held back their development. Thus people in different cohorts age in different ways.

Drawing on the PUMS file—the unique database created from Census Bureau data that spans fifty years of information on the entire U.S. population—we are able to compare and contrast what is happening at any stage to a particular cohort group over its lifetime, with regard to educational and occupational achievement, labor force status, income level, marriage, childbearing, and divorce patterns.

You can look yourself up in this book and compare yourself to people in your parents’ or your children’s age-groups. For instance, if you are a woman in your mid-forties, you will find yourself under the Vietnam Generation at every stage you have so far encountered—from Pulling Up Roots to the Tryout Twenties, Turbulent Thirties, and Flourishing Forties. Check out the striking increases in your education, professionalism, income, and childlessness compared with women of the previous “Silent” Generation. If you are a man in his sixties from the World War II Generation, you can look yourself up through the Flaming Fifties and Harmonizing Sixties. Notice, for example, how faithfully married you have remained since your thirties and how unprepared you are to retire at the traditional age of 65.

To highlight the ground conditions when you and your cohort set off on the journey of adult life, each of the five generations described below in capsules are compared during the transition out of adolescence. Pulling Up Roots, as I called it in Passages, is the time when we begin detaching from the family and initiating the search for a personal identity. Anything seems possible, but everything is open to question.

The tasks of this Pulling Up Roots passage are to locate ourselves in a peer group role, a sex role, an anticipated occupation, and an ideology or worldview—a tall order. By engaging in these tasks, we gather the impetus to leave home physically and the identity to begin leaving home emotionally. We generally start at this stage by claiming control over at least one aspect of our lives that our parents can’t touch. This is a key building block of adulthood. Reduced to its essence, mental health is enhanced by expanding our control over our environment.

This passage used to begin in earnest about age 18 and was usually completed by age 22. Military service, early marriage, or college created a compulsory break away from home. Exposure to a multicultural milieu was much more common when boys had to go to either college or boot camp, where rich and poor, snobs and hicks, North and South, all had to bunk in together. Universal military service ended in the United States in 1973. Volunteer military service now attracts only 6.4 percent of 18- to 19-year-old men.

Previous generations of men were desperate to have a paycheck by the age of 21. Supporting themselves was how they demonstrated they had achieved manhood. Young women were expected to be content with an identity confined by traditional sex roles. The message was: You are whom you marry and whom you mother. Thus women were often willing at 19 to make “jailbreak marriages” with inappropriate men just to get away from parental control.

Today, with the economies of the United States and Europe in the midst of a random revolution, men and women of any age feel the control over their lives threatened. To those in the not-yet-ready-for-adulthood age-group, it is particularly disorienting to have the economic ground beneath them shifting even as they make their first test steps. They haven’t had a chance yet to develop mature defenses or master any major life crises.

“Youth in crisis.” The label is axiomatic for any generation. Do you recognize the generation described in the following commentary from a TV magazine show?

They feel the rising sense of anxiety and insecurity… senseless outbreaks of savagery, as race rioting, and they are quick to absorb the new spirit of violence and recklessness.

The accompanying video depicts kids in their early teens smoking dope, buying pornography, and streetwalking to catch tricks. As usual, the finger of guilt for allowing this general decline in the moral health of youth is pointed at the working mother:

Today U.S. industry is employing hundreds of thousands of women, who before … were homemakers, devoting their full time to their families … the latchkey kid, whose working parents leave her to shift for herself at home, is today a familiar… phenomenon. Everywhere, children of working parents are being left without adequate supervision or restraint.

But this was not Dan Quayle harping on parents of the “X Generation” for failing to instill family values. This was a 1940s Time magazine documentary film about “Youth in Crisis,” depicting George Bush’s World War II Generation. At 19 or 22, its older male members were already away at war, proving themselves as young men in the most traditional way, while their younger brothers and sisters back home were discovering an alternative mode—juvenile delinquency. Herbert Hoover was beside himself about it. Mothers had been “drafted” by society to run the engines of war factories left idle by their soldiering husbands. Society had not foreseen the necessity to provide adequate day care.

So what’s new? During the 1970s and 1980s, while total money income levels were declining in constant dollars for men in every age-group except those over 65,3 wives and mothers were again “drafted” to jump-start the economy. The extra engine driving the economy during the 1980s, so that total income didn’t go down more than it did, was working women and wives. The Census Bureau incomes expert Paul Ryscavage corroborated my findings: “Returns on education for women during the 1980s drove earnings for all households in the country.” Once again society hasn’t caught up with the realities and provided adequate child care for the younger women who need it in order to work longer hours.”

Let’s look at psychological health in this age-group fifty years ago. One out of every four of the scared young men of the World War II Generation who stripped down for his draft physical was rejected by Selective Service because of a “mental or nervous condition.”5 Of course, the fact that nothing like that number remained psychologically dysfunctional in adulthood suggests that much of the turmoil of this passage is not new. Adolescents have always been susceptible to a “flu of the personality,” with brief but severe depressive episodes a fairly common accompaniment to the growing pains of adolescing. Weren’t you certain you would never recover from your first broken heart?

And so, while this chapter focuses on disparities in the life cycle from one generation to the next, be aware that important aspects of our inner development remain true to stage.

Bestselling author and cultural observer Gail Sheehy made history with the publication of Passages, which was an international bestseller, appearing in 28 languages. She followed up with The Silent Passage, New Passages, and Understanding Men’s Passages. Sheehy is also the author of Hillary’s Choice, a biography of Hillary Clinton, and Middletown, America, about a New Jersey town devastated by the World Trade Center attack. A contributing editor to Vanity Fair since 1984, Sheehy is the recipient of the Washington Journalism Review Award for Best Magazine Writer in America.

Mapping Your Life Across Time 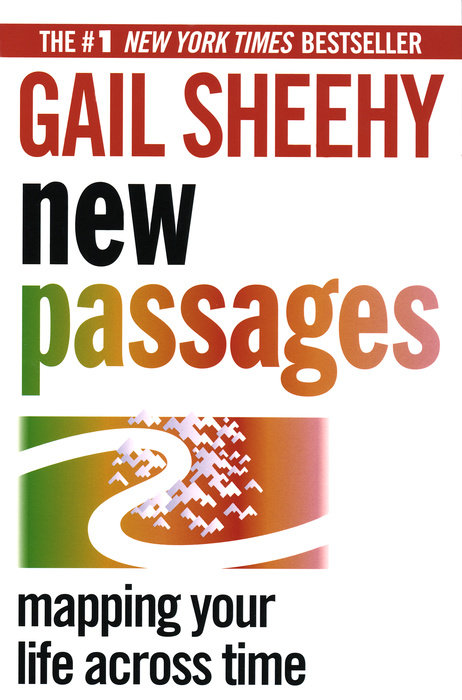