Mastering the Art of Public Speaking in an Age of Disconnection

A veteran journalist discovers an ancient system of speech techniques for overcoming the fear of public speaking—and reveals how they can profoundly change our lives.

In 2010, award-winning journalist John Bowe learned that his cousin Bill, a longtime extreme recluse living in his parents’ basement, had, at the age of fifty-nine, overcome a lifetime of shyness and isolation—and gotten happily married. Bill credited his turnaround to Toastmasters, the world's largest organization devoted to teaching the art of public speaking.

Fascinated by the possibility that speech training could foster the kind of psychological well-being more commonly sought through psychiatric treatment, and intrigued by the notion that words can serve as medicine, Bowe set out to discover the origins of speech training—and to learn for himself how to speak better in public.

From the birth of democracy in Ancient Greece until two centuries ago, education meant, in addition to reading and writing, years of learning specific, easily taught language techniques for interacting with others. Nowadays, absent such education, the average American speaks 16,000 to 20,000 words every day, but 74 percent of us suffer from speech anxiety. As he joins Toastmasters and learns, step-by-step, to successfully overcome his own speech anxiety, Bowe muses upon our record levels of loneliness, social isolation, and political divisiveness. What would it mean for Americans to learn once again the simple art of talking to one another?

Bowe shows that learning to speak in public means more than giving a decent speech without nervousness (or a total meltdown). Learning to connect with others bestows upon us an enhanced sense of freedom, power, and belonging.

An excerpt from I Have Something to Say

On Wednesday, July 13, 2012, I entered the automatic double doors of Byerly’s, an upscale supermarket in the Minneapolis suburb of Saint Louis Park. Beneath the over-bright lights of the gigantic overhead chandeliers, my fellow citizens hustled about, price-comparing and melon-thumping. I’d come to attend my first Toastmasters meeting, a prospect which felt only slightly more enticing than root canal surgery.

For reasons I hope to make clear over the next two-hundred-odd pages, I’d signed myself up to perform the world’s most dreaded activity—in front of strangers. The decision meant subjecting myself to certain humiliation—not once but weekly, for the next six months or more.

Perhaps most daunting, I’d agreed to do so in the least comfortable environment imaginable: my hometown. Which is to say that twenty-two years after deliberately disconnecting from Minneapolis by moving to New York City, I’d circled back with my partner, Isabel, seven months pregnant, so she could give birth to our first child with the support of my family—while immersing myself, coincidentally, in an art form known for two millennia as the art of connection. I could hardly wait to explain it all to whomever I might run into from high school.

Generally, public speaking is defined as the act of delivering prepared remarks to a group of people. It’s TED talks. Nobel Prize acceptance speeches. Wedding toasts and eulogies. Class reports, work presentations, and group discussions. Twenty-four hundred years ago, Aristotle, the world’s greatest authority on the subject, described it a little differently. In public or private, he taught, we speak for one reason: to persuade. Speech, in his view, was a grand and ceaseless argument. In the bedroom, the boardroom, or the public square, this endless competition—my point of view against yours, ours against theirs—was actually “a partnership.” It was the collective collaboration through which we develop and adjust our ideas about the foundations of civilization: justice, law, morality, and culture. To study the art of speech was more than merely learning to speak well or prettily. It meant exploring the basic operating system of human nature, the means by which we assert our identity and ultimately resolve questions of good and bad, true and false.

Isocrates, Aristotle’s more successful contemporary and one of Athens’s most famous speech teachers (with whom Aristotle almost never saw eye-to-eye), agreed with him on this: Speech was the quintessential human activity. For Isocrates, eloquence was intertwined with good action and larger notions of citizenship. If there was a single art form the mastery of which could make us wiser, more just, and more useful to our fellow citizens, it was public speaking.

If these ideas today seemed pie-in-the-sky, I’d interviewed hundreds of Toastmasters who seemed to prove his point. Learning to give speeches had transformed their lives and made them better, happier people.

As a writer and journalist, I’d spent much of my life studying art, music, film, literature, economics, business, design—everything I could to understand how people live and how life could be made better. But speech—as a cultural, historical, political force, much less as an art form—had never been on my radar. These ancient ideas about speech fascinated me, especially in view of the vast number of people in America and around the world who seem utterly incapable of speaking well to others. They gave me hope.

And so, despite my fear and dread, I signed myself up as my own personal guinea pig. I wanted to learn to express myself better in front of groups—to become eloquent. What would it mean, in this time of fraying social ties and decaying civic discourse, for me to learn how to connect with the people around me?

The website for Toastmasters had directed me to Club 1789, Speakeasy Toastmasters, located inside the grocery store’s community room. Community rooms are locales set aside throughout the United States by libraries, nonprofit organizations, chambers of commerce, and commercial property owners for cultural and educational gatherings. As I explored the supermarket periphery, feeling my way past the craft beer shop, the in-house pet food store, and the artisanal cheese boutique, I began to worry that maybe I’d misread the directions. At last, just past the bathrooms, to the rear of the cash registers, I spied a door opening onto a classroom-looking space with folding tables, fluorescent lights, a lectern in front, and a bright gold mounted flag reading, “Speakeasy Toastmasters.”

I walked in to find half a dozen friendly people milling around, chatting. By custom, Toastmasters respect new arrivals’ shyness. I’d heard of people who had joined the club and sat silently for a year before finally gathering up the courage to introduce themselves. No one demanded my name or asked why I was there, but as I squeezed past a pair of fortysomething women, one of them, a trim, alert-looking blonde, flagged me as a newcomer and handed me a Guest Packet.

The officer presiding over the meeting, also known as the Toastmaster, was an exceedingly mild-mannered man in his seventies with fine, tousled silver hair. Over a yellow golf shirt, he wore a camel-colored bird-watcher vest boasting an astonishing number of pockets stuffed with booklets, guides, flash cards, Bic pens, Cross pens (matching, silver), and multicolored markers in a neat, plastic snap-button packet. As the clock struck six, he approached the lectern.

“Good evening, fellow Toastmasters and distinguished guests,” he said mildly, giving the lectern a gentle gavel-smack. “Thank you for coming to Speakeasy Toastmasters. I’m Al Hoffman, and I’m your Toastmaster tonight. Does anyone have any questions?”

We went around the room and introduced ourselves. “Great,” Hoffman continued. “Now I’ll hand the floor to this week’s Wordmaster, Gordon Andersen.”

Andersen, to my left, was a rail-thin man in his eighties wearing a dark blue sports jacket with black suspenders and a white polyester dress shirt. His scalp shone pink through thinning hair carefully combed and oiled. As he stood, glanced around the room, and began to speak, his charisma emanated like a soothing breeze.

“Fellow Toastmasters and distinguished guests,” he began, “the Word of the Week is pursuit. Pursuit,” he repeated, “as in hot pursuit.” He loitered an extra nanosecond on the s and t, grinning as if sharing something slightly naughty. “Or: the pursuit of excellence. Pursuit,” he concluded. He looked around the room, making eye contact with each and every one of us for a beat, nodded at Hoffman, and sat down, seeming pleased with himself. We clapped.

“Okay,” said Hoffman from the lectern. “Now it’s time for the Joke of the Week. Does anyone have any jokes?”

To my right rose a sprightly, modest-appearing woman in her seventies. From her bright-orange hair to her tiny white tennis shoes, she seemed cut from the same cloth as Andersen—elderly, Scandinavian, demure, and exquisitely self-possessed.

“Ole,” she began, “is getting ready to celebrate his fiftieth anniversary.”

A titter went around the room. Sven and Ole jokes are an old Minnesota standby, recounting the endless mishaps of the mythically dense Scandinavian immigrants, Sven, Ole, and Lena (Ole’s wife). As we leaned forward in our seats, she shifted into a Norwegian accent:

“Vhat are you going to do for your anniversary?” Sven says.

Sven says, “Dat’s nice, so vhat are you going to do to top dat?”

The old chestnut got a laugh. Our sprightly humorist sat down, gathering our applause like a poker player raking in chips after a winning hand.

The slightly harried-looking Hispanic woman rose and stiffly recited an inoffensive riddle about cannibals; the razor-stubbly guy stood and produced an affable joke about clowns. We clapped for her. We clapped for him. As should now be obvious, the club, by design and without fail, offers the least judgmental, most forgiving environment imaginable. If a member had sobbed and wet themselves by way of telling a joke, we would have clapped for them, too.

The welcoming vibe notwithstanding, I began to succumb to a violent swoon of paranoia. There’s no f***ing way I can do this. I’d vowed before coming that from my very first meeting, I’d raise my hand and join in, despite my apprehensions. But how? None of what I was observing seemed remotely like normal human behavior. The standing up, sitting down, joke-telling, clapping, and looking around the room to make eye contact seemed entirely scripted and ritualized. It wasn’t natural.

John Bowe has contributed to The New Yorker, The New York Times Magazine, GQ, McSweeney's, This American Life, and many others. He is the co-editor of Gig: Americans Talk About Their Jobs; editor of Us: Americans Talk About Love, and author of Nobodies: Modern American Slave Labor and the Dark Side of the New Global Economy. He co-wrote the screenplay for the movie Basquiat. He is a recipient of the J. Anthony Lukas Work-in-Progress Award, the Hillman Prize, the Richard J. Margolis Award, and the Harry Chapin Media Award, for reporting on hunger-and poverty-related issues. He was born in Wayzata, Minnesota. He currently lives in New York City.

Mastering the Art of Public Speaking in an Age of Disconnection 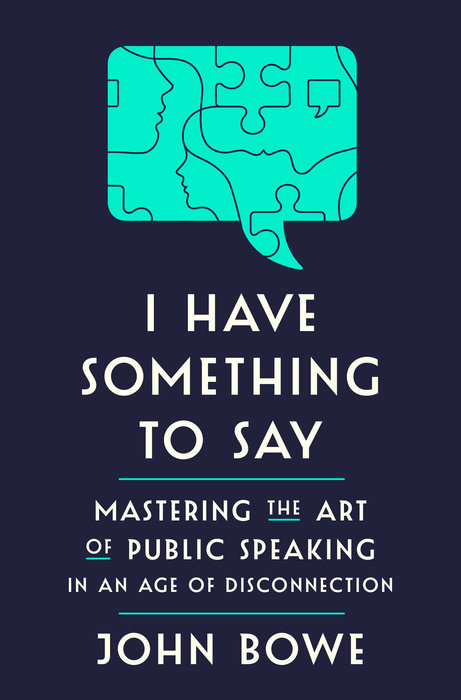