The Ultimate User's Manual for Your Brain

Learn the easy steps to harnessing the incredible creative power of your mind that can enable anyone to Think Like A Genius.


How you already think like a genius without even knowing it--page 6
The secret formula for genius: C.R.E.A.T.E.--page 22
Ways to overcome the fear that inhibits the genius within you--page 58
How to transform the cynicism of I can't do it to the confidence of I can do anything--page 66
Breaking out of mental ruts and daily routines that block your road to genius--page 77
How to turn the obvious into a work of art, a new insight, or a multimillion-dollar creation--page 92
Getting unstuck from the quicksand of indecision and procrastination--page 106
The secret essence of every stroke of genius--page 165
And much more!

"The Goose with the Golden Egg"

A farmer went to the nest of his goose to see whether she had laid an egg.  To his surprise he found, instead of an ordinary goose egg, an egg of solid gold.  Seizing the golden egg, he rushed to the house in great excitement to show it to his wife.

Every day thereafter the goose laid an egg of pure gold.  But as the farmer grew rich he grew greedy.  And thinking that if he killed the goose he could have all her treasure at once, he cut her open only to find--nothing at all.

Application: The greedy who want more lose all.
--Aesop's Fables


Most of the answers you're looking for are hidden in your mind: from ideas, products, stories, and experiences to confidence and inner peace.  That's why it's so important to explore how your mind works, to know it intimately.  Too many people are strangers to their own minds.  The key thing to remember is: Like the farmer in this fable of Aesop's, you don't have to get all the answers (or eggs) all at once.

This book gives you two "golden eggs" for exploring your mind.  One is the ability to find or create the information you need to realize your goals.  The other is the ability to apply this information in productive and meaningful ways.  In the process of gaining these golden eggs, you learn how to think like a genius -- that is, to think and see things in new ways, leading to fresh discoveries and inventions.

Becoming more original in your thinking and using your creativity more effectively are the keys to improving the quality of your life.  Being a genius doesn't mean that you have to live in some lofty creative world of ideas all the time.  It includes using your common sense.  As the author Gertrude Stein reminds us, "Everybody gets so much information all day long that they lose their common sense."  The poet Ralph Waldo Emerson said, "Common sense is genius dressed in its working clothes."

The Mystery of Genius

Genius is thinking of something in a way that no one ever has before.  Even though there seems to be nothing new under the sun, there are countless things that have not been discovered, invented, explored, or expressed in depth.

As the neuropsychologist Howard Gardner points out, there are as many types and facets of genius as there are forms of intelligence.  Instead of discussing categories and qualities of genius, I use this term to describe the highest caliber of thinking or exceptional performance.  But no matter how astutely it's defined or described, it remains as mysterious as the universe.

Geniuses are able to see what many miss.  They see possibilities in the impossible.

Many geniuses can simplify the complex, make the unknown known.  They can grasp the ungraspable, making whole what others make only in parts.  They can look at old ideas and discover new things in them.  They can recombine information in refreshing and novel ways.  They can create and adapt concepts.  They can optimize knowledge and experiences.
A genius has the ability to see around corners using intuition.  A scientific and mathematical genius makes visible the unseen truths of nature, such as light, gravity, electricity, and other phenomena.  Geniuses in music, literature, and comedy seem to be able to "get a grip on" things that are untouchable or abstract to most people--things like the way we learn, think, feel, and communicate.

Furthermore, geniuses often reach their revelations in a fraction of the time most of us take to understand new things.  The key to their remarkable speed is their ability to grasp the essence of the thing they're gripping and connecting with.  They rely on their intuition and personal knowledge to do this.


One genius I have in mind, whose method of working clearly exemplifies this act of connecting and gripping things, is Santiago Ramon y Cajal, a Nobel laureate in physiology.  Cajal was one of this century's finest neuroanatomists.  He had a "feeling for" the anatomy of the human brain the way Babe Ruth understood baseball.

To Ruth, the ball and baseball field were as much a part of him as his arms and legs.  To Cajal, the field of neuroanatomy was an extension of himself.  He advised his students: "Lose yourself in the observation and become the thing you're studying."  For him, this meant becoming a cell neuron and imagining the world of neurons by living among them.  By experiencing the system, he would come as close as possible to understanding how that system worked.  That's a connection!  This strategy helped him figure out how certain neurons are connected to each other and how they might communicate.


You Don't Have to Be a Genius to Think Like One

When you read the title of this book, or the preceding descriptions of genius, you may have thought: "Who, me?  I'm no genius.  How can I learn to think like a genius, if I'm not one?"

We have been taught that a genius is someone who knows how to think deeply and with originality, an advanced thinker with an expansive mind, such as Plato, Aristotle, or Leonardo da Vinci.  We have not been taught that, alongside our most celebrated geniuses, there are legions of everyday geniuses.  They're not people who are mental giants.  Nor are they intellectual heroes.  Their theories and inventions don't change cultures or civilizations.  But they have all experienced flights of exceptional thinking, often in some highly practical way.  Such is the genius behind the invention of paper, Velcro®, staples, nails, steel, glass, cement, currency, and other remarkably "simple" but useful things.  And we have as much to learn from these everyday geniuses as we do from those rare legendary figures who form the stratosphere of history.  From the use of stone tools in 2,000,000 b.c.  to our CD-ROM animated encyclopedias, countless inventions demonstrate our individual and collective genius.

We have all experienced flights of genius.  We all think things that we never thought before, and we all think in ways we never thought before, especially when we're children.  We discovered how to walk and how to speak.  These personal achievements have aspects of genius to them because they required us to connect information that at first seemed unrelated.  We understood that a bed, chair, table, and shower are all different in appearance and function, and yet we all managed, as toddlers, to house these symbols in our minds' sense of things that belong in a home.

In effect, we were doing as children what Leonardo da Vinci called "creative seeing."  This was the key to his creative powers and vision -- this saper vedere, a Latin phrase for "knowing how to see."  He believed that any imaginative person could learn how to see and, in his words, "work with the deepest essence" of what they see and experience.  For Leonardo, saper vedere was the means of discovering or creating something new.

In his book Human, All Too Human, the German philosopher Friedrich Nietzsche described the making of genius in this modest, mortal way: "Someone who has completely lost his way in a forest, but strives with uncommon energy to get out of it in whatever direction, sometimes discovers a new, unknown way: this is how geniuses come into being, who are then praised for their originality."

Todd Siler received his Ph.D. in interdisciplinary studies in psychology and art from the Massachusetts Institute of Technology; his artworks are in the permanent collections of the Metropolitan Museum of Art, the Museum of Modern Art, the Guggenheim Museum, and the Whitney Museum, among others. His company, Psi-Phi Communications, develops multimedia learning materials for business and education, and he also gives lectures and seminars on creativity, art, and technology to organizations nationwide. Siler's first book was Breaking the Mind Barrier.

The Ultimate User's Manual for Your Brain 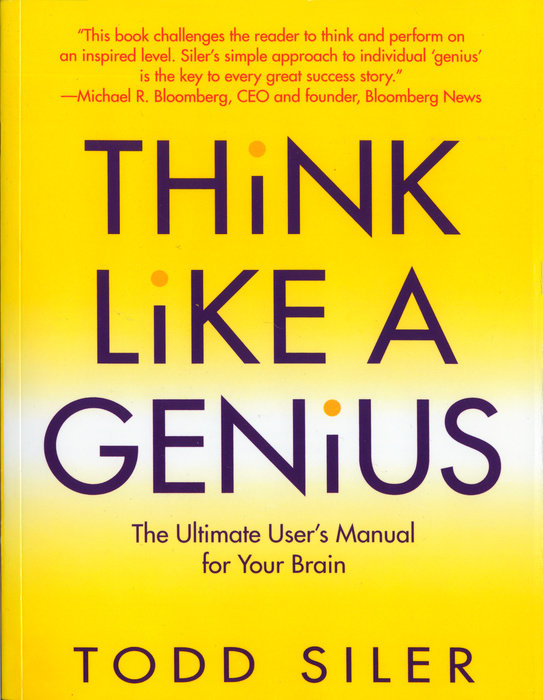