The beloved real-life story of a woman in the Alaskan wilderness, the children she taught, and the man she loved.

“From the time I’d been a girl, I’d been thrilled with the idea of living on a frontier. So when I was offered the job of teaching school in a gold-mining settlement called Chicken, I accepted right away.”

Anne Hobbs was only nineteen in 1927 when she came to harsh and beautiful Alaska. Running a ramshackle schoolhouse would expose her to more than just the elements. After she allowed Native American children into her class and fell in love with a half-Inuit man, she would learn the meanings of prejudice and perseverance, irrational hatred and unconditional love. “People get as mean as the weather,” she discovered, but they were also capable of great good.

As told to Robert Specht, Anne Hobbs’s true story has captivated generations of readers. Now this beautiful new edition is available to inspire many more.

“The memoir reads like an old-fashioned novel, a heartwarming love story with the added interest of frontier hardships and vividly portrayed characters.”—Publishers Weekly

An excerpt from Tisha

Even though it was barely eight o’clock and the sun had just come up, practically the whole town of Eagle had turned out to see the pack train off. Counting the Indians, who’d come down from their fish camp for the dance the previous night, there must have been close to a hundred people gathered around—miners in hip-length boots, old sourdoughs in battered Stetsons, even women and children. In a few minutes I’d be leaving, going off into the wilderness, and I was kind of excited. I was scared too, and I must have showed it, because Mrs. Rooney asked me if I was feeling well.

“You look a little pale. You’re not afraid of the trip, I hope.”

“No. I guess I just didn’t expect there’d be all these people,” I said.

Mrs. Rooney dismissed them with a wave of her hand. “One thing you’ll learn is that it doesn’t take much to collect a crowd in Alaska. As for the trip, you don’t have a thing to worry about. It’s only ninety miles and you’ll be perfectly safe. Mr. Strong will take good care of you.”

But it really wasn’t the crowd that was bothering me. Hardly anybody was paying any attention to me. To the people here this was just a little event, nothing like the riverboat coming in, which was really exciting to them. And I wasn’t afraid of the trip, either. It was the horse I’d be riding for the next four days that was scaring me. I’d have felt silly admitting it, but he was making me so nervous I could hardly concentrate on what Mrs. Rooney was saying. It wasn’t as if I’d never been on a horse before. Eight years ago, when I was living with my grandmother on her farm, I used to ride around on old Tom bareback. I was only eleven then, and Tom was a pretty big horse, but he always moved so slow and he was so gentle that you could almost curl up on his broad back and go to sleep and you wouldn’t fall off. This one was mean.

He was called Blossom, but where he got that name I would never know. Maybe he looked like a blossom when he was a colt, but it was the last thing he looked like now. He was so huge that even if I stood on my toes I wouldn’t have been able to see over the saddle, and he was scarred and wild-looking. From the minute Mr. Strong handed his reins over to me I’d been afraid of him. And Blossom knew it. He started rolling his eyes at me right away and tried to nip me a couple of times. After he caught the sleeve of my jacket once I made sure to hold the reins close to the bit and keep him at arm’s length. But every time I thought he’d settled down, he’d jerk his head up and nearly pull my arm out of its socket.

From the corner of my eye I could see Mr. Strong moving toward me down the line of horses and mules that were tethered together.

I wished I wasn’t the only passenger. In another minute I’d have to mount up, and as scared of Blossom as I was, I was sure I’d make a spectacle of myself. We weren’t getting along too well just standing side by side, so I couldn’t foresee our relations improving when I was up on top of him.

The other animals in the train were loaded down with just about everything in creation: washboards, sacks of dried beans, bolts of canvas, even windowpanes. One mule started bucking, trying to shake off his burden of shovels and stovepipes and whatnot. The load shifted and it looked as if it was going off until somebody grabbed it at the last minute. The rest of the animals stood patiently while Mr. Strong adjusted a rope here and there or tightened a cinch.

“… And if you have any problems at all,” Mrs. Rooney was saying, “write to me and I’ll be glad to give you any advice I can.” She fingered the cameo brooch on the front of her dress. “And remember what I said—spare the rod and spoil the child. Show those kids right off that you’re the teacher and you won’t have a bit of trouble.”

“If you have to smack a couple of them do it.”

Somebody went over to Mr. Strong’s stable and started to close the doors. I caught a glimpse of the big sled that was in there. It was the size of a hay wagon, and I wondered how many horses it took to pull it. In a couple of months from now, after the first heavy snowfall, Mr. Strong would be bringing my trunk out on it.

The doors slammed shut and the odor of hay and manure drifted over. And then Mr. Strong was beside us, clearing his throat. Even though it was sunny and comfortable, he was wearing a mackinaw. It was open, and I could see the top button of his long underwear under his flannel shirt.

He was a tall, stoop-shouldered man, and he had such a courtly way about him that if he wore a beard he’d have made me think of Don Quixote. When I’d first met him yesterday his manners had seemed so out of place in this rough country that I thought he was joking and almost laughed. I was glad I didn’t, though, because he acted that way with almost everyone. I’d been waiting over two days for his pack train to come in, but when I’d asked him if he could take me to Chicken all he’d said was, “Yes, madam, I can.”

“Will you be going soon?”I’d asked him.

“Yes, madam. My pack train leaves for Chicken on the fourth, the fourteenth and the twenty-fourth of each month. I shall, therefore, be leaving tomorrow. Eight a.m. sharp.”

“The rent for your horse will be ten dollars per day. That will include your meals along the way and your lodgings. The journey will take four days. I hope that will be satisfactory.”

I’d told him it would be fine and that was that.

Mrs. Rooney smiled up at him. “You will take good care of her, won’t you, Mr. Strong?”

“I shall do my best.” Compared to him, President Coolidge was a nonstop talker.

Mrs. Rooney looked at him coquettishly and brushed at the front of her dress. It had a lot of shiny spots where her corset poked against it. She’d been a widow for ten years, she’d told me, and I had a feeling she would have liked to marry him, but he wasn’t interested.

He took the reins from me and dropped them over Blossom’s head, then he bent forward with his hands locked together. I grabbed the saddle horn and he boosted me up. Once I was in the saddle the ground looked pretty far down. Blossom started to dance around and a few people laughed. I thought they were laughing at the trouble I was having trying to get him to stand still, but as soon as he settled down I saw they were laughing at my legs. The saddle was so big and wide that they stuck out like wings.

“Better do somethin’ about them pins a hers, Walter,” somebody called out, “or she’ll be knockin’ down every tree in the Forty Mile.”

Mr. Strong shortened the stirrups until I could get my feet into them, but I was still spread out pretty wide. Some good-natured suggestions were offered by people close by, such as tying rocks to my feet, but Mr. Strong didn’t see anything funny about them.

“When we stop over at my camp in Liberty tonight,” he said to me, “I will have a smaller saddle for you.” He looked at my clothes skeptically. “Are you sure, madam, you will not reconsider my offer of the coat?” A little earlier, when he saw how I was dressed, he had offered to lend me a coat, saying that the weather was very changeable. But I’d told him I didn’t think I’d need it.

If I was back in the States I’d have felt ridiculous, but here in Alaska nobody cared how you dressed. I was wearing the jacket of my pink Easter suit, a pair of boy’s corduroy knickers I’d bought for the ride, cotton stockings and some old sport brogues. I knew that the flowered hat I’d bought in Portland the past summer would end up crushed if it was put on the pack animals with my other things, so I wore that too. My ensemble was completed by a nickel-plated revolver that a fellow had given me at the dance last night.

Mr. Strong was still skeptical. “Should you change your mind, let me know.”

“Now, Walter,” an old-timer called out, “why you want to go and hide all that nice young beauty under that old army coat?”

Mr. Strong started for the front of the pack train and I looked around, able to see the whole crowd for the first time. A few old men were sitting on the rail of the schoolhouse porch, giving encouragement to a couple of little boys on a small dogsled. The sled was outfitted with some old baby-carriage wheels and the boys were trying to teach the malamute puppy that was pulling how to gee and haw.

Robert Specht was born and brought up in New York City. A late starter, he graduated from CCNY at the age of thirty-two after winning top awards in both short story and essay competitions. Soon afterward he headed for California, where he became an editor in the Los Angeles offices of a major book publishing firm. It was then that he met the heroine of this book and became fascinated with her story. Not until years later, however, after he became a freelance writer, was he able to sit down and devote his full energies to writing it. Now a screenwriter, he lives in Malibu with his wife and two children—and two horses, three dogs, three cats, assorted chickens, two tortoises, an ever-changing population of guppies, and a guinea pig named Munch. 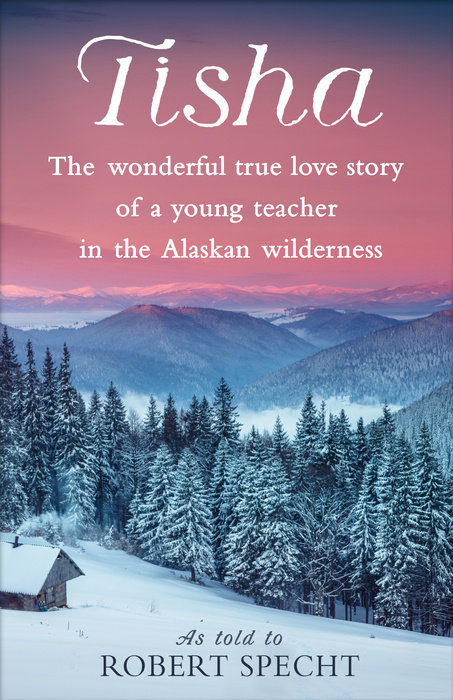