Sleek, swift and deadly, the famed X-Wing fighters have earned their reputation as the Rebel Alliance's ultimate strike force the hard way--first in battle, the last line of defense.  Now they must make a deal with the devil herself--an enemy whose ultimate goal is their total annihilation.

It's the kind of mission only Wedge Antilles and the Rogue Squadron would dare to undertake.  Against impossible odds they will stage a daring raid into an enemy stronghold--only to be rescued from certain destruction by an unexpected ally.

Ysanne Isard, the ruthless Imperial commander, has appeared on the scene seemingly from out of nowhere.  Now she proposes a most unusual alliance, offering to help Wedge rescue his captured comrades from Imperial Warlord Admiral Krennel's sadistic prison camp.

But her offer is not without a price.  Wedge must lead Rogue Squadron in Isard's deadly struggle against an enemy made in her own image.  It's an offer Wedge would love to refuse, for Isard is certain to betray them.  But how can they leave their comrades at Krennel's mercy?  The answer is: they can't--even if it means being caught between Krennel's ruthlessness and Isard's treachery.

Sithspawn! When his X-wing reverted to realspace before the countdown timer had reached zero, Corran Horn knew Thrawn had somehow managed to outguess the New Republic yet one more time. The Rogues had helped create the deception that the New Republic would be going after the Tangrene Ubiqtorate Base, but Thrawn clearly hadn't taken the bait.

The man's incredible. I'd like to meet him, shake his hand. Corran smiled. And then kill him, of course.

Two seconds into realspace and the depth of Thrawn's brilliance became undeniable. The New Republic's forces had been brought out of hyperspace by two Interdictor cruisers, which even now started to fade back toward the Imperial lines. This left the New Republic's ships well shy of the Bilbringi shipyards and facing an Imperial fleet arrayed for battle. The two Interdictors that had dragged them from hyperspace were a small part of a larger force scattered around to make sure the New Republic's ships were not going to be able to retreat.

Corran keyed his comm unit. "Three Flight, on me. Hold it together and nail some squints."

The cant-winged Interceptors rolled in and down on the Rogues. Corran kicked his X-wing up on its port S-foil and flicked his lasers over to quad-fire mode. While that would slow his rate of fire, each burst had a better chance of killing a squint outright. And there are plenty that need killing here.

Corran nudged his stick right and dropped the crosshairs onto an Interceptor making a run at Admiral Ackbar's flagship. He hit the firing switch, sending four red laser bolts burning out at the target. They hit on the starboard side, with two of them piercing the cockpit and the other two vaporizing the strut supporting the right wing. The bent hexagonal wing sheered off in a shower of sparks, while the rest of the craft started a long, lazy spiral toward the outer edges of the system.

As the Gand's high-pitched voice poured through the comm unit, Corran snaprolled his X-wing to the left, then chopped his throttle back and hauled hard on the stick to take him into a loop. An Interceptor flashed through where he had been, and Ooryl Qyrgg's X-wing came fast on its tail. Ooryl's lasers blazed in sequence, stippling the Interceptor with red energy darts. One hit each wing, melting great furrows through them, while the other two lanced through the cockpit right above the twin ion engines. The engines themselves tore free of their support structure and blew out through the front of the squint, then exploded in a silver fireball that consumed the rest of the Imperial fighter.

Whistler, the green and white R2 unit slotted in behind Corran, hooted, and data started pouring up over the fighter's main monitor. It told him in exact detail what he was seeing unfold in space around him. The New Republic's forces had come into the system in the standard conical formation that allowed them to maximize firepower. Thrawn had arrayed his forces in more of a bowl shape, with Interdictor cruisers ringing the outer edge, preventing retreat and promoting containment. The Imperial forces also appeared to have very specific fire missions and were working over the smaller support ships in Ackbar's fleet.

Corran shivered. And even if we were to punch through the Imp formation, we'd still have to deal with the Golan Space Defense Stations protecting the Imperial shipyards. Thrawn, genius that he had proved himself to be, had set a perfect ambush for the New Republic. The Bilbringi shipyards were crucial to the Imperial war effort since they were a major supplier of ships, and their loss would strike a major blow against Thrawn's effort to destroy the New Republic.

Of course, Thrawn figured that out himself and knew we'd be here. Until Thrawn slithered in from the Unknown Regions and began his drive to reestablish the Empire, Corran had allowed himself to believe the tough battles had already been won, and all the New Republic had left to do was to mop up the last of the Imperials. Now it seems the hard battles are here and waiting to be lost.

With a flick of his thumb, Corran evened his shields out fore and aft, then throttled back up and slashed in at a pair of Interceptors making a run on a New Republic Assault Frigate. He slid his crosshairs over on the trailing Interceptor as it began its shallow glide along the Frigate's hull. His quad burst caught most of the port wing, liquefying it in an instant. The molten metal froze in a long black tangle of ribbonlike shards trailing after the damaged fighter. The pilot juked his ship to the right to escape Corran, but that flew him straight into a burst from one of the Frigate's turbolasers, vaporizing the squint in an eyeblink.

The lead Interceptor rolled to port and cut down past the curve of the Frigate's hull. Corran caught a flash of red on one of the Interceptor's wings and nodded. "Looks like he was once part of the One Eighty-first Imperial Fighter Group. They used to be feared. Maybe I ought to see why."

The droid blatted harshly at him.

"Yes, I'll be careful. Neither one of us wants to know what Mirax will do to the survivor if we die." Corran winked at the holograph of his wife fixed to a side panel in his cockpit, then rolled his X-wing and cruised down after the squint. He threaded a path through the turbolaser blasts the Frigate was pumping out, then swept past the ship out near its engines

Even before Whistler could hoot a warning, the hiss of lasers splashing themselves over his aft shields caught Corran's full attention. His secondary monitor showed the Interceptor dropping in on his tail. Must have throttled back and hovered near the engines, waiting. This guy is good.

Pumping more energy into his shields, Corran rolled the X-wing right, up onto the S-foil. He pulled back on the stick to start a loop and held it for three seconds, then cut his throttle back and inverted. Pulling back harder on the stick, he completed a fast loop, then throttled up through the end of it and rolled out right.

As his fighter's nose came to point at the Interceptor, the Imp pilot rolled his craft and dove away from Corran. The Corellian pilot started down after him, but cut back to 75 percent of his speed. As he anticipated, the Imp cut his speed as well, hoping Corran would race past him. Instead Corran triggered one quick burst of fire that hit high on the Imp's port wing, burning a black hole through the red stripe. He then stood on his right rudder pedal, keeping his guns on the squint, and poured another quad burst of laserfire into the Interceptor.

All four ruby darts drilled through the port wing, then stabbed deep into the cockpit. A bright light flashed through the hole the lasers had opened, and Corran expected the ship to explode, but it didn't. Instead it began to come apart, with bits and pieces of it whirling away as if the bright flash had disintegrated all the rivets and welds used in its manufacture.

Corran looped his X-wing away from the dying squint, but before he could vector in on another Interceptor, he heard Commander Wedge Antilles coming through on the squadron's tactical channel. "All Rogues, come about on a heading of one-two-five, mark one-seven. That Golan Space Defense Station is designated Green One. It's ours."

"We'll just have to be tougher than it is, won't we, Six?" Wedge's reply came loaded with grim irony. "If we can get into the shipyard, the Imps will have to think about more than just pounding our fleet. Besides, we have friends coming out. One Flight is on me. Five, you have Two Flight. Nine, you have Three."

"As ordered, Lead." Corran brought his fighter around on the appropriate heading and locked the target into his computer. "Estimated time of arrival at missile range is forty seconds. Let's move, Three Flight."

Ooryl pulled his X-wing up on Corran's starboard wing. Inyri Forge brought Rogue Twelve up on Corran's port wing and Asyr Sei'lar, in Rogue Eleven, hung back off Inyri's port wing. Corran goosed his ship a bit forward and shifted his attention toward their target, trusting the others to keep him informed if Imps were vectoring in on them from behind.

Not likely, though, since they've got plenty to keep them busy. Throughout the bowl into which the New Republic's fleet moved, massive salvos of energy shot up and down and side to side, filling the area with a dazzling light show. Corran would have been more than content to watch the turbolaser bursts flow back and forth, but the fact that they were lethal was more than enough to keep him from finding much beauty in them. Behind the squadron, Y-wings, A-wings, and B-wings mixed it up with Interceptors, TIE fighters, and Bombers, punctuating the light show with brilliant explosions. 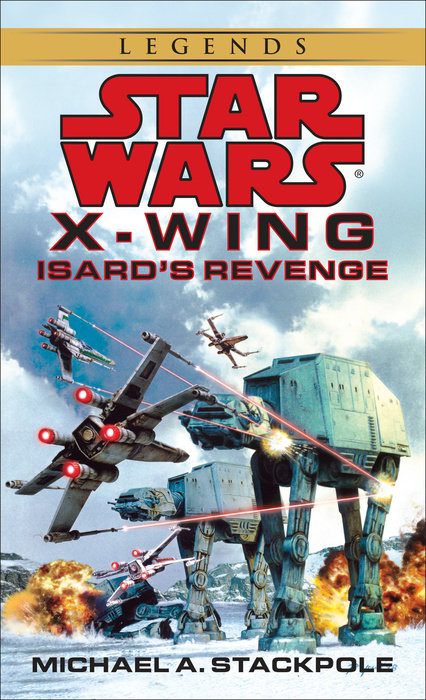