In this essential Star Wars Legends novel, discover the legacy of Rogue Squadron and its fabled pilots, who became a symbol of hope throughout the galaxy.

They are sleek, swift, and deadly. They are the X-wing fighters. And as the struggle rages across the vastness of space, the fearless men and women who pilot them risk both their lives and their machines. Their mission: to defend the Rebel Alliance against a still-powerful and battle-hardened Imperial foe in a last-ditch effort to control the stars!

Its very name strikes fear into enemy hearts. So when Rebel hero Wedge Antilles rebuilds the legendary Rogue Squadron, he seeks out only the best—the most skilled and most daring X-wing pilots. Through arduous training and dangerous missions, he weeds out the weak from the strong, assembling a group of hard-bitten warriors willing to fight, ready to die. Antilles knows the grim truth: Even with the best X-wing jockeys in the galaxy, many will not survive their near-suicidal missions. But when Rogue Squadron is ordered to assist in the assault on the heavily fortified Imperial stronghold of Blackmoon, even the bravest must wonder if any at all will survive. . .

You're good, Corran, but you're no Luke Skywalker. Corran Horn's cheek still burned at the memory of Commander Antilles's evaluation of his last simulator exercise. The line had been a simple comment, not meant to be cruel nor delivered that way, but it cut deep into Corran. I've never tried to suggest I'm that good of a pilot.

He shook his head. No, you just wanted it to be self-evident and easily recognized by everyone around you. Reaching out he flicked the starter switches for the X-wing simulator's engines. "Green One has four starts and is go." All around him in the cockpit various switches, buttons, and monitors flashed to life. "Primary and secondary power is at full."

Green Three and Four checked in, then the external screens came alive projecting an empty starfield. "Whistler, have you finished the navigation
calculations?"

The green and white R2 unit seated behind Corran hooted, then the navdata spilled out over. Corran's main monitor He punched a button sending the same coordinates out to the other pilots in Green Flight. "Go to light speed and rendezvous on the Redemption."

As Corran engaged the X-wing's hyperdrive, the stars elongated themselves into white cylinders, then snapped back into pinpoints and began to revolve slowly, transforming themselves into a tunnel of white light. Corran fought the urge to use the stick to compensate for the roll. In space, and especially hyperspace, up and down were relative. How his ship moved through hyperspace didn't really matter--as long as it remained on the course Whistler had calculated and had attained sufficient velocity before entering hyperspace, he'd arrive intact.

Flying into a black hole would actually make this run easier. Every pilot dreaded the Redemption run. The scenario was based on an Imperial attack on evacuation ships back before the first Death Star had been destroyed. While the Redemption waited for three Medevac shuttles and the corvette Korolev to dock and off-load wounded, the Imperial frigate Warspite danced around the system and dumped TIE fighters and bombers out to do as much damage as they could.

The bombers, with a full load of missiles, could do a lot of damage. All the pilots called the Redemption scenario by another name: the Requiem scenario. The Warspite would only deploy four starfighters and a half-dozen bombers--known in pilot slang as "eyeballs" and "dupes" respectively--but it would do so in a pattern that made it all but impossible for the pilots to save the Korolev. The corvette was just one big target, and the TIE bombers had no trouble unloading all their missiles into it.

Stellar pinpoints elongated again as the fighter came out of hyperspace. Off to the port side Corran saw the Redemption. Moments later Whistler reported that the other fighters and all three Medevac shuttles had arrived. The fighters checked in and the first shuttle began its docking maneuver with the Redemption.

"Green One, this is Green Four."

"By the book, or are we doing something fancy?"

Corran hesitated before answering. By book, Nawara Ven had referred to the general wisdom about the scenario. It stated that one pilot should play fleethund and race out to engage the first TIE flight while the other three fighters remained in close as backup. As long as three fighters stayed at home, it appeared, the Warspite dropped ships off at a considerable distance from the Korolev. When they didn't, it got bolder and the whole scenario became very bloody.

The problem with going by the book was that it wasn't a very good strategy. It meant one pilot had to deal with five TIEs--two eyeballs and three dupes--all by himself, then turn around and engage five more. Even with them coming in waves, the chances of being able to succeed against those odds were slim.

Doing it any other way was disastrous. Besides, what loyal son of Corellia ever had any use for odds?

"By the book. Keep the home fires burning and pick up after me."

"Thanks." Corran reached up with his right hand and pressed it against the lucky charm he wore on a chain around his neck. Though he could barely feel the coin through his gloves and the thick material of his flight suit, the familiar sensation of the metal resting against his breastbone brought a smile to his face. It worked for you a lot, Dad, let's hope all its luck hasn't run out yet.

Isle openly acknowledged that he'd been depending quite a bit on luck to see him through the difficulties of settling in with the Alliance forces. Learning the slang took some work--moving from calling TIE starfighters "eyeballs" to calling Interceptors "squints" made a certain amount of sense, but many other terms had been born of logic that escaped him. Everything about the Rebellion seemed odd in comparison to his previous life and fitting in had not been easy.

Nor will be winning this scenario.

The Korolev materialized and moved toward the Redemption, prompting Corran to begin his final check. He'd mulled the scenario over in his mind time and time again. In previous runs, when he served as a home guard to someone else's fleethund, he'd had Whistler record traces on the TIE timing patterns, flight styles, and attack vectors. While different cadets flew the TIE half of the simulations, the craft dictated their performance and a lot of their initial run sequence had been preprogrammed.

A sharp squawk from Whistler alerted Corran to the Warspite's arrival. "Great, eleven kicks aft." Pulling the stick around to the right, Corran brought the X-wing into a wide turn. At the end of it he punched the throttle up to full power. Hitting another switch up to the right, he locked the S-foils into attack position. "Green One engaging."

Rhysati's voice came cool and strong through the radio. "Be all over them like drool on a Hutt."

"I'll do my best, Green Three." Corran smiled and waggled the X-wing as he flew back through the Alliance formation and out toward the Warspite. Whistler announced the appearance of three TIE bombers with a low tone, then brought the sound up as two TIE fighters joined them.

"Whistler, tag the bombers as targets one, two, and three." As the R2 unit complied with that order, Corran pushed shield power full to front and brought his laser targeting program up on the main monitor. With his left hand he adjusted the sighting calibration knob on the stick and got the two fighters. Good, looks like three klicks between the eyeballs and the bombers.

Corran's right hand again brushed the coin beneath his flight suit. He took a deep breath, exhaled slowly, then settled his hand on the stick and let his thumb hover over the firing button. At two klicks the heads-up display painted a yellow box around the lead TIE fighter. The box went green as the fighter's image locked into the HUD's targeting cross and Whistler's shrill bleat filled the cockpit. Corran's thumb hit the button, sending three bursts of laser bolts at the lead fighter.

The first set missed but the second and third blasted through the spherical cockpit. The hexagonal solar panels snapped off and spun forward through space while the ion engines exploded into an expanding ball of incandescent gas.

Corran kicked the X-wing up in a ninety-degree snap-roll and sliced through the center of the explosion. Laser fire from the second fighter lit up his forward shields, making it impossible for him to get a good visual line on the TIE. Whistler yowled, complaining about being a target. Corran hurried a shot and knew he hit, but the TIE flashed past and continued on in at the Korolev. 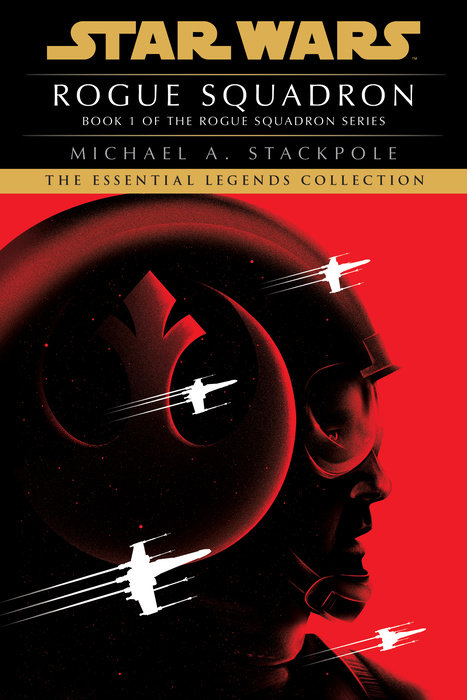