The brave pilots of Rogue Squadron face the impossible as the sinister Ysanne Isard wreaks havoc on a fragile Coruscant.

The Rebels have taken the Imperial headquarters world of Coruscant, but their problems are far from over.

A killer virus called Krytos is spreading among the population and fomenting a counterrevolution at the heart of the New Republic. At the same time, Rebel hero Tycho Celchu is on trial for treason, accused of murdering his comrade and fellow pilot Corran Horn.

Corran, however, is still alive, trapped in the secret, inescapable prison of Ysanne Isard, the imperial officer whose reputation for torture and cruelty have earned her the moniker Iceheart. As he fights for his freedom, the pilot discovers an extraordinary power in himself—the power of the Force!

High up in a tower suite, up above the surface of Imperial Center, Kirtan Loor allowed himself a smile. At the tower's pinnacle, the only companions were hawk-bats safe in their shadowed roosts and Special Intelligence operatives who were menacing despite their lack of stormtrooper armor or bulk. He felt alone and aloof, but those sensations came naturally with his sense of superiority. At the top of the world, he had been given all he could see to command and dominate.

Ysanne Isard had given him the job of creating and leading a Palpatine Counter-insurgency Front. He knew she did not expect grand success from him. He had been given ample resources to make himself a nuisance. He could disrupt the functioning of the New Republic. He could slow their takeover of Coruscant and hamper their ability to master the mechanisms of galactic administration. A bother, minor but vexatious, is what Ysanne Isard had intended he become.

Kirtan Loor knew he had to become more. Years before, when he started working as an Imperial liaison officer with the Corellian Security Force on Corellia, he never would have dreamed of finding himself rising so far and playing so deadly a game. Even so, he had always been ambitious, and supremely confident in himself and his abilities. His chief asset was his memory, which allowed him to recall a plethora of facts, no matter how obscure. Once he had seen or read or heard something he could draw it from his memory, and this ability gave him a gross advantage over the criminals and bureaucrats with whom he dealt.

His reliance on his memory had also hobbled him. His prodigious feats of recall so overawed his enemies that they would naturally assume he had processed the information he possessed and had drawn the logical conclusions from it. Since they assumed he already knew what only they knew, they would tell him what he had not bothered to figure out for himself. They made it unnecessary for him to truly think, and that skill had begun to atrophy in him.

Ysanne Isard, when she summoned him to Imperial Center, had made it abundantly clear that learning to think and not to assume was the key to his continued existence. Her supervision made up in severity what it lacked in duration, putting him through a grueling regimen that rehabilitated his cognitive abilities. By the time she fled Imperial Center, Isard had clearly been confident in his ability to annoy and confound the Rebels.

More importantly, Kirtan Loor had become certain that he could do all she wanted and yet more.

From his vantage point he looked down on the distant blob of dignitaries and mourners gathered at the memorial for Corran Horn. While he despised them all for their politics, he joined them in mourning Horn's loss. Corran Horn had been Loor's nemesis. They had hated each other on Corellia, and Loor had spent a year and a half trying to hunt Corran down after he fled from Corellia. The hunt had ended when Ysanne Isard brought Loor to Imperial Center, but he had anticipated a renewal of his private little war with Horn when given the assignment to remain on Coruscant.

Of course, Corran's demise hardly made a dent in the legion of enemies Loor had on Imperial Center. Foremost among them was General Airen Cracken, the director of Alliance Intelligence. Cracken's network of spies and operatives had ultimately made the conquest of the Imperial capital possible, and his security precautions had given Imperial counterintelligence agents fits for years. Cracken--or Kraken, as some of Loor's people had taken to calling the Rebel--would be a difficult foe with whom to grapple.

Loor knew he had some other enemies who would pursue him as part of a personal vendetta. The whole of Rogue Squadron, from Antilles to the new recruits, would gladly hunt him down and kill him--including the spy in their midst since Loor presented a security risk for the spy. Even if they could not connect him with Corran's death directly, the mere fact that Corran hated him would be a burden they'd gladly accept and a debt they would attempt to discharge.

Della Wessiri was the last of the CorSec personnel Loor had hunted, and her presence on Imperial Center gave him pause. She had never been as relentless as Corran Horn in her pursuit of criminals, but that had always seemed to Loor to be because she was more thorough than Horn. Whereas Corran might muscle his way through an investigation, Della picked up on small clues and accomplished with élan what Corran did with brute strength. In the shadow game in which Loor was engaged, this meant she was a foe he might not see coming, and that made her the most dangerous of all.

Loor backed away from the window and looked at the holographic representation of the figures below as they strode across his holotable. The ceremony had been broadcast planetwide, and would be rebroadcast at various worlds throughout the galaxy. He watched Borsk Fey'lya and Wedge Antilles as they met in close conversation, then split apart and wandered away. Everyone appeared more like toys to him than they did real people. He found it easy to imagine himself a titanic--no, Imperial--presence who had deigned to be distracted by the actions of bugs.

He picked up the remote device from the table and flicked it on. A couple of small lights flashed on the black rectangle in his left palm, then a red button in the center of it glowed almost benignly. His thumb hovered over it for a second. He smiled, but killed the impulse to stab his thumb down and gently returned the device to the table.

A year before he would have punched that button, detonating the explosives his people had secreted around the memorial. With one casual caress he could have unleashed fire and pain, wiping out a cadre of traitorous planetary officials and eliminating Rogue Squadron. He knew, given a chance, any of the SI operatives under his command would have triggered the nergon 14 charges--as would the majority of the military command staff still serving the Empire. 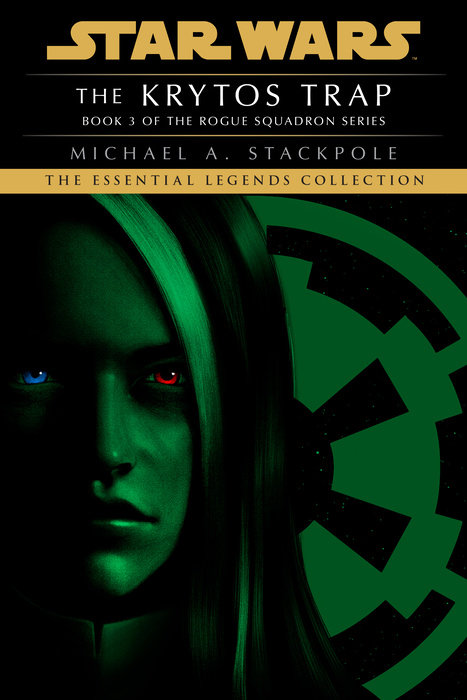