The man he is sworn to protect is the man who butchered his family.

Justices—the select of the Talion, endowed with fearsome magick and lethal martial skills—roam the Shattered Empire, crushing the lawless and championing the oppressed. Their word is law and their judgement binding on highborn and low.

Nolan is a Justice born in what once was the free nation of Sinjaria. Orphaned in the war of conquest with the nation of Hamis, he traveled to far Talianna and secured the right to become a Justice. Now, years later, the Master of all Talions has a dangerous assignment for Nolan: He is to guard the life of the king who destroyed Sinjaria and slaughtered his family. Alone, Nolan ventures into the political maelstrom that is the court of Hamis to stop an assassin even his Masters think cannot be slain. . . .

An excerpt from Talion

I unrolled the yellowed map Orjan had given me in Tashar and squinted at the huge dolmen halfway up through the pass.  Three stones supported a large, flat triangular slab.  I checked the map and smiled.  The dolmen was the last landmark on my map.  Just up the slope, through the last narrow pass in the Tal Mountains, was Talianna.  I'd made it.

I rolled the map back up and jammed it over my shoulder into my pack.  I picked up my walking stick and marched forward over the uneven, rocky ground.  I was so close to my goal I could feel it just beyond the horizon.  The pass would open up and there it would be, Talianna, the home of the people who brought justice to the world.

A smile crept onto my face.  I was eager to be done with my journey.  A thousand miles and five months before, I'd left my family's home in Sinjaria and set out.  At first it seemed a foolish mission.  I was not even twelve summers old when I started, and the journey began without any real planning.  I knew Talianna lay west and north, so I headed into the Darkesh and just kept walking.

Hiking that last mile I knew all the other miles had seemed long and lonely and dangerous.  Even so, try as I might, I couldn't bring to mind the particulars of any one mile when I thought the journey would be ended prematurely.  The times I came across signs of outlaw bands, as in the forests of Cela, I hid. When I found a farm or village, I traded work for space near the fire and as much food as I could get.  And when I got sick I was lucky enough to meet someone like Orjan who took care of me.

The last hundred yards of the pass rose very steeply and forced me to crawl forward on my hands and feet.  I carefully picked my hand- and footholds because I did not want to injure myself so close to the goal I'd worked so hard to reach.  I had to make it in good health or the entire journey would be wasted.

Halfway up the slope it occurred to me that the Nolan who started the journey would never have even attempted a climb like this, nor would he have been able to complete it.  I'd not filled out during the trek--there was not enough food along the way to let me do that--but I'd grown harder.  I'd worked my childhood chubbiness off and I'd grown an inch or two.  If I continued at that rate I'd surpass my twin older brothers and perhaps even my father.

I reached the top of the hill before I could catch myself up in thinking about my family.  I pulled myself onto the hilltop and collapsed.  My chest heaved and labored hard to suck in enough of the thin mountain air to sate my body.  A bit dizzy, I lay back and, drunk with success, just started to laugh.  Finally I regained enough strength to roll over onto my hands and knees.  I levered myself up and the Tal Valley unfolded below me.

I'd never seen anything so green before.  Deep, dark living green covered the valley floor.  From the patchwork of cultivated fields in the south and west to the forest at the base of the mountains upon which I stood, this valley was the verdant treasure my father had promised our farm would one day become.

The natural wonders of the valley paled to insignificance, though, when compared to Talianna itself.  Star within a pentagon within another pentagon, Talianna rose up, a gleaming white stone city full of strength and power. Massive white marble blocks made up the walls and buildings.  The outer siege wall stood twenty feet tall, while the inner pentagon soared up to half again that height.

The central star was the most magnificent building I'd ever seen.  The walls of each point sloped in and up to form a pyramid at the star's core.  The pyramid itself had a flat top and a flagpole set in the center of it.  A plain black flag writhed and snapped in the breeze because here, in the Tal province, it needed no ensign.

I stood there and shivered.  I took a deep breath and let it out slowly through my nose.  I had arrived: I'd reached my destination.  I'd finished my journey and the time came for me to decide my destiny.

I opened a pouch on my belt and fished around in the bottom of it for a small, leather-wrapped packet.  I untied the lacing and took out a single gold Imperial.  It had been my family's treasure and was only to be used in an emergency, but even it had not been enough to save them.

It was an old coin, so old I could not read the inscription.  Bright and clean as the day the mint struck it despite its antiquity, it bore no signs of use or wear.  The words on the coin were old and although I knew how to read, I could not make out what they meant.  Still I did recognize the face on the coin.  It was Emperor Clekan, the first emperor, Clekan the Just.

I weighed the coin in my hand.  I relished its coolness, and reveled in the fact that it no longer seemed heavy.  I swallowed once and flipped the coin high into the air.  It spun and spun, flashing spears of sunlight off in all directions.  As it fell to earth again I caught it in my open right palm. Clekan's profile glowed in the sunlight.

A shadow blotted out the sun.  I twisted to my right and caught a flash of white and brown descending through the blue sky.  A high scream deafened me and something hit me hard in the back.  I felt the shoulder straps on my back pull, twist, and snap as I smashed into the ground.

I landed hard on my chest and had the wind knocked from my lungs.  I bounced once and flipped onto my back.  I lay there, arms and legs splayed out, while I tried to breathe and scream.  I tried to swallow enough air to stem the suffocating feeling in my chest, but my body would not respond.  In addition to my breathlessness, my back complained of the impact and the jagged chunk of rock beneath me.

I felt someone grab my shoulders and pull me off the rock.  "Don't try to move. Is anything broken?"  The voice was young, about my age, and as nervous and scared as I felt.

I shook my head and opened my eyes.  A sandy-haired, brown-eyed boy wearing a brown jerkin with a white hawk in flight stenciled on the left breast stood over me.  With my response to his question he calmed almost instantly and that calmed me.

"I'm an Elite novice."  He reached down and took hold of my belt.  He lifted up, arched my back gently, and forced air into my lungs.  I didn't breathe much in, but it cooled the burning in my chest nonetheless.  He lowered me, then lifted again.

The numbness centered in my chest faded.  I nodded at him and tapped his arm twice.  He let me down and crouched beside me.  "Can you feel your legs and toes?"

I took in a deep breath and exhaled slowly.  I squeezed my eyes shut against the pain of sore ribs.  I drew my knees up and flexed my toes.  "Yes, I can."

The Talion novice rocked back on his heels and smiled.  "I'm sorry for what happened.  I passed my trial today and took Valiant up for a flight.  He saw something and stooped.  It wasn't until the last second I saw you.  No one's supposed to be up in these mountains during Festival."

I tucked my legs under me and came up into a sitting position.  The sharpness of pain in my back drained away, but it still felt pretty sore.  That's when I saw Valiant for the first time--the blur of color I saw before he hit me did not count--and I paled.

The Elite caught my reaction and smiled.  "Don't be afraid of him.  He's not even full grown yet."

Valiant was an Imperial Hawk.  Its belly was white and dappled with dark brown, while the wings and back were light brown.  It stood, hobbled and hooded, about twenty feet away from me and shredded my pack.  From talons to the top of its head it stood about six feet high, and when full grown would be able to take cattle the way a kestrel takes varmints.

The Elite nodded.  He hefted my coin and flashed it in the sunlight.  "I think he saw the flash and went for it.  You shouldn't be up here.  How did you get past the patrols keeping Festival people out of this area?"  He handed me the coin and I returned it to my pouch.

"I came in from the north.  I'm coming to be a Talion.  My name's Nolan, Nolan ra Sinjaria."

The Talion's eyes narrowed, then he stood.  "I'm Erlan ra Leth, though I've been in Talianna since just after I was born.  Come on."  He reached down and helped me to my feet.  "You've got to sign in by the end of today or you can't try to join during this Festival."

I looked down at the valley below.  "I can't climb down there by the end of the day." 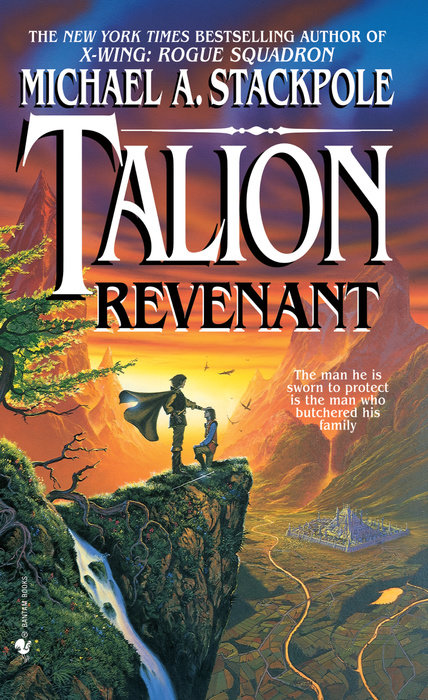