New York Times bestselling author Michael A. Stackpole is a recognized star of military fantasy. The Dark Glory War is a thrilling new tale set in a world threatened by an unstoppable foe. . . .

In the sacred season of the Moon Month, four young men don the masks that herald their coming-of-age celebration, a time of testing, ritual, festival, and romance.

But for Tarrant Hawkins and his friends Leigh, Rounce, and Nay, their first test becomes a desperate struggle for survival. For they will encounter the vanguard of an invasion force poised to overrun their homeland of Oriosa, and all four will find their lives changed forever when they encounter a legendary weapon that brings its wielder invincibility. Yet the magic sword may prove more curse than blessing, signaling the arrival of a cataclysmic battle with ancient foes. And in the face of dire sorceries and terrible battles, these youths will come to manhood . . . or to death.

An excerpt from The Dark Glory War

The day they gave me my mask was the first day I felt truly alive.

Though I received my mask over two decades ago, I remember the events surrounding it clearly. The tinge of winter had not quite left the air that year, so even as we were coming to Mid-Summer's Eve the days were cooler than normal. Many people were happy with the weather, since the previous year had been a scorcher, and some went so far as to suggest that the mild weather might have betokened the death of Chytrine, the scourge of the Northlands. I didn't care about the weather or the tyrant of Aurolan because this was my eighteenth summer, which made it special and me anxious.

The mask I got was not, of course, the first mask I had ever worn, nor would it be the last. It was a simple moonmask, as white as the orb for which it was named. If the gods smiled and I proved worthy, as the moon again became full I would be awarded my first life mask, and this moonmask would be a memento of my transition from childhood frivolity to adult responsibility.

It had been my intention, that morning, to wake early and dress myself, as befit my new station in life. I wanted to be able to greet my father as an adult in all but the mask he would bring. Unfortunately I awoke much too early, spent time in my bed wondering if I should get up or go to sleep again, then fell asleep and remained so rather solidly until, dimly, I heard my father's heavy tread on the stairs. Before I could rub sleepsand from my eyes, the door opened and he entered my room.

My memory of his coming to me that mid-summer morning, bearing the mask, still endures and is one of my most favorite of him. All over Oriosa other children in their eighteenth summer were also receiving their masks. For many of them the presentation would be a family affair, but among the Hawkinses, fathers presented masks to sons, mothers to daughters, making it a more intimate and solemn occasion. I welcomed this moment of serenity before what I guessed would be a month of controlled insanity.

My father stood there, at the foot of my bed, looking down at me. His life mask, which he seldom wore in our house, had a fearsome visage. White temeryx feathers, with their shifting rainbow highlights, splayed out and back at the mask's temples. The cut of the mask's lower edge had been sharpened into a hawk's beak over his nose. This had been done both as a play on our name and the fact that Lord Norrington and his father before him had often used my father to hunt enemies the way another might loose a hawk on a varmint. Orphan notches had been cut by each eye and the brown leather had two green ribbons stitched into the portion covering his forehead. Those marked awards for bravery, one from Lord Norrington and the other from the hand of the Oriosan queen.

A hank of blond and silver hair hung down over the mask's forehead and bisected the ribbons. My father refused to wear a cowl, though entitled to do so, preferring to let others see his full head of hair. Through the mask's narrowed eyeslits I could see his brown eyes, perhaps the hint of a tear glistening in an orphan notch. He never cried from pain, my father, physical pain, anyway. But other hurts, or life's joys, could tickle a tear from his eyes.

Though he did not stand as tall as I, he was still a big man and broader through the chest and shoulders than I was. Growing up, he'd seemed bigger, and yet even as I grew into my adult size, I always thought of him as bigger than me. Though he was entering the twilight of his life, my father still possessed the strength of his youth and served as Lord Norrington's Peaceward in Valsina.

He raised his hands slowly, bearing between them the simple strip of white leather I would wear for the next month. "Arise, Tarrant Hawkins. At an end are the carefree days of your youth. Upon this mask, and many like it, will be written the story of your life as a man."

I threw back my blanket, and with only the crackle of the straw mattress and the groan of old floorboards to break the silence, I stood before my father. I plucked a piece of straw from the sleeve of my nightshirt, then ran fingers back through my black hair and snagged another piece. They fell to the floor as my hands returned to my sides.

I'd waited for this day forever, it seemed. The full moon closest to mid-summer marked the day we'd get our moonmasks. Everyone my age knew the full moon would fall exactly on mid-summer, which meant we would be blessed and special. Great things would be expected from us, and I hoped I would prove worthy of such an auspicious omen. Ever since I'd learned that the full moon would fall on mid-summer in my year, I had worked to prepare for this day and the rest of my life beyond it.

The problem was, however, that preparing for the unknown was not a simple task. I knew, in general, what would happen during my Moon Month. While I'd been barred from the festivities surrounding similar awards to my brothers and sisters, the results of their Moon Months were not hard to see. Noni, my eldest sister, had emerged betrothed from her month, while my older brothers had won positions in the Frontier Lancers and the Oriosan Scouts respectively. It seemed to me to be pretty clear that during their month they had been the subjects of negotiations or recruitment that set them on a path for the rest of their lives.

Reaching up, my father pressed the leather mask against my face, then raised my left hand to hold it in place. I turned in compliance with his pressure on my shoulder and felt him tighten the mask in place. A bit of my hair caught in the knot and pulled, but I knew that had not been an accident. The hair and the mask are equally now part of me. I am the mask and it is me.

I turned back to face him and saw a proud smile broaden the lower half of his face. "You already wear the mask well, Tarrant." 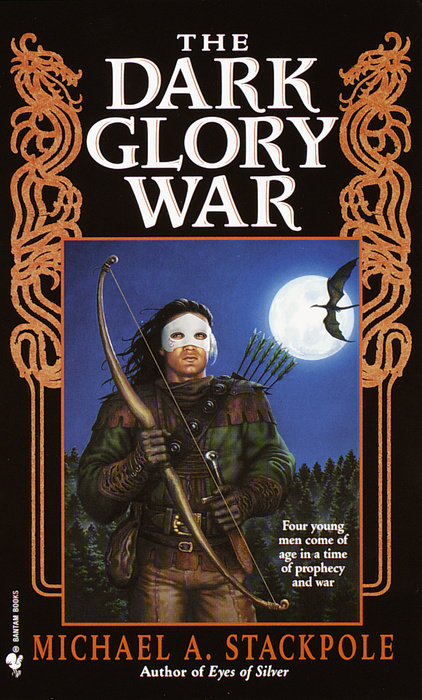