﻿Called a “magnificently crafted story . . . brimming with wisdom” by Howard Frank Mosher in The Washington Post Book World, Crossing to Safety has, since its publication in 1987, established itself as one of the greatest and most cherished American novels of the twentieth century. Tracing the lives, loves, and aspirations of two couples who move between Vermont and Wisconsin, it is a work of quiet majesty, deep compassion, and powerful insight into the alchemy of friendship and marriage.

An excerpt from Crossing to Safety

Floating upward through a confusion of dreams and memory, curving like a trout through the rings of previous risings, I surface. My eyes open. I am awake.

Cataract sufferers must see like this when the bandages are removed after the operation: every detail as sharp as if seen for the first time, yet familiar too, known from before the time of blindness, the remembered and the seen coalescing as in a stereoscope.

It is obviously very early. The light is no more than dusk that leaks past the edges of the blinds. But I see, or remember, or both, the uncurtained windows, the bare rafters, the board walls with nothing on them except a calendar that I think was here the last time we were, eight years ago.

What used to be aggressively spartan is shabby now. Nothing has been refreshed or added since Charity and Sid turned the compound over to the children. I should feel as if I were waking up in some Ma-and-Pa motel in hard-times country, but I don’t. I have spent too many good days and nights in this cottage to be depressed by it.

There is even, as my eyes make better use of the dusk and I lift my head off the pillow to look around, something marvelously reassuring about the room, a warmth even in the gloom. Associations, probably, but also color. The unfinished pine of the walls and ceilings has mellowed, over the years, to a rich honey color, as if stained by the warmth of the people who built it into a shelter for their friends. I take it as an omen; and though I remind myself why we are here, I can’t shake the sense of loved familiarity into which I just awoke.

The air is as familiar as the room. Standard summer-cottage taint of mice, plus a faint, not-unpleasant remembrance of skunks under the house, but around and through those a keenness as of seven thousand feet. Illusion, of course. What smells like altitude is latitude. Canada is only a dozen miles north, and the ice sheet that left its tracks all over this region has not gone for good, but only withdrawn. Something in the air, even in August, says it will be back.

In fact, if you could forget mortality, and that used to be easier here than in most places, you could really believe that time is circular, and not linear and progressive as our culture is bent on proving. Seen in geological perspective, we are fossils in the making, to be buried and eventually exposed again for the puzzlement of creatures of later eras. Seen in either geological or biological terms, we don’t warrant attention as individuals. One of us doesn’t differ that much from another, each generation repeats its parents, the works we build to outlast us are not much more enduring than anthills, and much less so than coral reefs. Here everything returns upon itself, repeats and renews itself, and present can hardly be told from past.

Sally is still sleeping. I slide out of bed and go barefooted across the cold wooden floor. The calendar, as I pass it, insists that it is not the one I remember. It says, accurately, that it is 1972, and that the month is August.

The door creaks as I ease it open. Keen air, gray light, gray lake below, gray sky through the hemlocks whose tops reach well above the porch. More than once, in summers past, Sid and I cut down some of those weedlike trees to let more light into the guest cottage. All we did was destroy some individuals, we never discouraged the species. The hemlocks like this steep shore. Like other species, they hang on to their territory.

I come back in and get my clothes off a chair, the same clothes I wore from New Mexico, and dress. Sally sleeps on, used up by the long flight and the five-hour drive up from Boston. Too hard a day for her, but she wouldn’t hear of breaking the trip. Having been summoned, she would come.

For a minute I stand listening to her breathing, wondering if I dare go out and leave her. But she is deeply asleep, and should stay that way for a while. No one is going to be coming around at this hour. This early piece of the morning is mine. Tiptoeing, I go out onto the porch and stand exposed to what, for all my senses can tell me, might as well be 1938 as 1972.

No one is up in the Lang compound. No lights through the trees, no smell of kindling smoke on the air. I go out the spongy woods path past the woodshed and into the road, and there I meet the sky, faintly brightening in the east, and the morning star as steady as a lamp. Down under the hemlocks I thought it overcast, but out here I see the bowl of the sky pale and spotless.

My feet take me up the road to the gate, and through it. Just inside the gate the road forks. I ignore the Ridge House road and choose instead the narrow dirt road that climbs around the hill to the right. John Wightman, whose cottage sits at the end of it, died fifteen years ago. He will not be up to protest my walking in his ruts. It is a road I have walked hundreds of times, a lovely lost tunnel through the trees, busy this morning with birds and little shy rustling things, my favorite road anywhere.

Dew has soaked everything. I could wash my hands in the ferns, and when I pick a leaf off a maple branch I get a shower on my head and shoulders. Through the hardwoods along the foot of the hill, through the belt of cedars where the ground is swampy with springs, through the spruce and balsam of the steep pitch, I go alertly, feasting my eyes. I see coon tracks, an adult and two young, in the mud, and maturing grasses bent like croquet wickets with wet, and spotted orange Amanitas, at this season flattened or even concave and holding water, and miniature forests of club moss and ground pine and ground cedar. There are brown caves of shelter, mouse and hare country, under the wide skirts of spruce.

My feet are wet. Off in the woods I hear a Peabody bird tentatively try out a song he seems to have half forgotten. I look to the left, up the slope of the hill, to see if I can catch a glimpse of Ridge House, but see only trees.

Then I come out on the shoulder of the hill, and there is the whole sky, immense and full of light that has drowned the stars. Its edges are piled with hills. Over Stannard Mountain the air is hot gold, and as I watch, the sun surges up over the crest and stares me down.

We didn’t come back to Battell Pond this time for pleasure. We came out of affection and family solidarity, as adopted members of the clan, and because we were asked for and expected. But I can’t feel somber now, any more than I could when I awoke in the shabby old guest cottage. Quite the reverse. I wonder if I have ever felt more alive, more competent in my mind and more at ease with myself and my world, than I feel for a few minutes on the shoulder of that known hill while I watch the sun climb powerfully and confidently and see below me the unchanged village, the lake like a pool of mercury, the varying greens of hayfields and meadows and sugarbush and black spruce woods, all of it lifting and warming as the stretched shadows shorten.

There it was, there it is, the place where during the best time of our lives friendship had its home and happiness its headquarters.

When I come in I find Sally sitting up, the blind closest to the bed—the one she can reach—raised to let a streak of sun into the room. She is drinking a cup of coffee from the thermos and eating a banana from the fruit basket that Hallie left when she put us to bed last night.

“Not breakfast,” Hallie said. “Just hazari. We’ll come and get you for brunch, but we won’t come too early. You’ll be tired and off your clock. So sleep in, and we’ll come and get you about ten. After brunch we’ ll go up and see Mom, and later in the afternoon she’s planned a picnic on Folsom Hill.”

“A picnic?” Sally said. “Is she well enough to go on a picnic? If she’s doing it for us, she shouldn’t.”

“That’s the way she’s arranged it,” Hallie said. “She said you’d be tired, and to let you rest, and if she says you’ll be tired, you might as well be tired. If she plans a picnic, you’d better want a picnic. No, she’ll be all right. She saves her strength for the things that matter to her. She wants it like old times.”

I let up the other two blinds and lighten the dim room. “Where’d you go?” Sally asks.

“Up the old Wightman road.”

I pour myself coffee and sit down in the wicker chair that I remember as part of the furniture of the Ark. From the bed Sally watches me. “How was it?”

“I wish I could have been along.”

“No, we’ll be going up to the picnic, that’s enough.” She sips her coffee, watching me over the rim of the cup. “Isn’t it typical? At death’s door, and she wants it like old times, and orders everybody to make it that way. And worries about us being tired. Ah, she’s going to leave a hole! There’s been a hole, ever since we. . . . Did you feel any absences?”

“I’m glad. I can’ t imagine this place without them in it. Both of them.”

Wallace Stegner (1909–1993) was the author of, among other novels, All the Little Live Things (winner of a Commonwealth Club Gold Medal), Angle of Repose (winner of the Pulitzer Prize), and The Spectator Bird (winner of the National Book Award). His nonfiction includes The Sound of Mountain Water, The Uneasy Chair: A Biography of Bernard DeVoto, and Where the Bluebird Sings to the Lemonade Springs: Living and Writing in the West. Three of his short stories won O. Henry Prizes, and in 1980 he received the Robert Kirsch Award from the Los Angeles Times for his lifetime literary achievements. 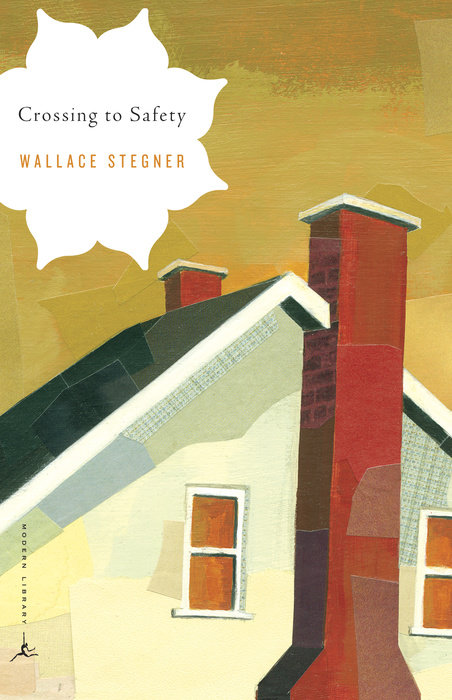