As any herpetologist will tell you, the fer-de-lance is among the most dreaded snakes known to man.  When someone makes a present of one to Nero Wolfe, Archie Goodwin knows he's getting dreadully close to solving the devilishly clever murders of an immigrant and a college president.  As for Wolfe, he's playing snake charmer in a case with more twists than an anaconda -- whistling a seductive tune he hopes will catch a killer who's still got poison in his heart.

An excerpt from Fer-de-Lance

There was no reason why I shouldn’t have been sent for the beer that day, for the last ends of the Fairmont National Bank case had been gathered in the week before and there was nothing for me to do but errands, and Wolfe never hesitated about running me down to Murray Street for a can of shoe-polish if he happened to need one. But it was Fritz who was sent for the beer. Right after lunch his bell called him up from the kitchen before he could have got the dishes washed, and after getting his orders he went out and took the roadster which we always left parked in front. An hour later he was back, with the rumble seat piled high with baskets filled with bottles. Wolfe was in the office—as he and I called it, Fritz called it the library—and I was in the front room reading a book on gunshot wounds which I couldn’t make head or tail of, when I glanced through the window and saw Fritz pull up at the curb. It was a good excuse to stretch my legs, so I went out and helped him unload and carry the baskets into the kitchen, where we were starting to stow the bottles away in a cupboard when the bell rang. I followed Fritz into the office.

Wolfe lifted his head. I mention that, because his head was so big that lifting it struck you as being quite a job. It was probably really bigger than it looked, for the rest of him was so huge that any head on top of it but his own would have escaped your notice entirely.

“In the kitchen, sir. The lower cupboard on the right, I thought.”

“I want it in here. Is it cold? And an opener and two glasses.”

I grinned and sat down on a chair to wonder what Wolfe was doing with some pieces of paper he had cut into little discs and was pushing around into different positions on the desk blotter. Fritz began bringing in the beer, six at a time on a tray. After the third trip I had another grin when I saw Wolfe glance up at the array on the table and then around at Fritz’s back going through the door. Two more trays full; whereupon Wolfe halted the parade.

“Fritz. Would you inform me when this is likely to end?”

“Very soon, sir. There are nineteen more. Forty-nine in all.”

“Yes, sir. You said one of every kind procurable. I went to a dozen shops, at least that.”

“All right. Bring them in. And some plain salt crackers. None shall lack opportunity, Fritz, it wouldn’t be fair.”

It turned out that the idea was, as Wolfe explained to me after he had invited me to draw my chair up to the desk and begin opening the bottles, that he had decided to give up the bootleg beer, which for years he had bought in barrels and kept in a cooler in the basement, if he could find a brand of the legal 3.2 that was potable. He had also decided, he said, that six quarts a day was unnecessary and took too much time and thereafter he would limit himself to five. I grinned at that, for I didn’t believe it, and I grinned again when I thought how the place would be cluttered up with empty bottles unless Fritz ran his legs off all day long. I said to him something I had said before more than once, that beer slowed up a man’s head and with him running like a brook, six quarts a day, I never would understand how he could make his brain work so fast and deep that no other man in the country could touch him. He replied, also as he had before, that it wasn’t his brain that worked, it was his lower nerve centers; and as I opened the fifth bottle for him to sample he went on to say—not the first time for that either—that he would not insult me by acknowledging my flattery, since if it was sincere I was a fool and if it was calculated I was a knave.

He smacked his lips, tasting the fifth brand, and holding up the glass looked through the amber at the light. “This is a pleasant surprise, Archie. I would not have believed it. That of course is the advantage of being a pessimist; a pessimist gets nothing but pleasant surprises, an optimist nothing but unpleasant. So far, none of this is sewage. As you see, Fritz has marked the prices on the labels, and I’ve started with the cheap ones. No, here, take this next.”

It was at that moment that I heard the faint buzz from the kitchen that meant the front door, and it was that buzz that started the ball rolling. Though at the time it appeared to be nothing interesting, just Durkin asking a favor.

Durkin was all right up to the neck. When I consider how thick he was in most respects I am surprised how he could tail. I know bull terriers are dumb, but good tailing means a lot more than just hanging on, and Fred Durkin was good. I asked him once how he did it, and he said, “I just go up to the subject and ask him where he’s headed for, and then if I lose him I know where to look.” I suppose he knew how funny that was; I don’t know, I suspect him. When things got so Wolfe had to cut down expenses like everybody else from bankers to bums, Saul Panzer and I got our weekly envelopes sliced, but Durkin’s was stopped altogether. Wolfe called him in when he was needed and paid him by the day, so I still saw him off and on and knew he was having hard sledding. Things had been slow and I hadn’t run across him for a month or more when the buzzer sounded that day and Fritz brought him to the door of the office.

Wolfe looked up and nodded. “Hello, Fred. Do I owe you something?”

Durkin, approaching the desk with his hat in his hand, shook his head. “How are you, Mr. Wolfe. I wish to God you did. If there was anybody owed me anything I’d be with him like a saddle on a horse.”

“Sit down. Will you sample some beer?”

Wolfe looked up again, and his big thick lips pushed out a little, tight together, just a small movement, and back again, and then out and back again. How I loved to watch him doing that! That was about the only time I ever got excited, when Wolfe’s lips were moving like that. It didn’t matter whether it was some little thing like this with Durkin or when he was on the track of something big and dangerous. I knew what was going on, something was happening so fast inside of him and so much ground was being covered, the whole world in a flash, that no one else could ever really understand it even if he had tried his best to explain, which he never did. Sometimes, when he felt patient, he explained to me and it seemed to make sense, but I realized afterward that that was only because the proof had come and so I could accept it. I said to Saul Panzer once that it was like being with him in a dark room which neither of you has ever seen before, and he describes all of its contents to you, and then when the light is turned on his explanation of how he did it seems sensible because you see everything there before you just as he described it.

Wolfe said to Durkin, “You know my failing on the financial side. But since you haven’t come to borrow money, your favor is likely granted. What is it?”

Durkin scowled. Wolfe always upset him. “Nobody needs to borrow money worse than I do. How do you know it’s not that?”

“No matter. Archie will explain. You’re not embarrassed enough, and you wouldn’t have brought a woman with you. What is it?”

I leaned forward and broke in, “Damn it, he’s alone! My ears are good anyhow!”

A little ripple, imperceptible except to eyes like mine that had caught it before, ran over Wolfe’s enormous bulk. “Of course, Archie, splendid ears. But there was nothing to hear; the lady made no sound audible at this distance. And Fritz did not speak to her; but in greeting Fred there was a courtesy in his tone which he saves for softer flesh. If I should hear Fritz using that tone to a lone man I’d send him to a psychoanalyst at once.” 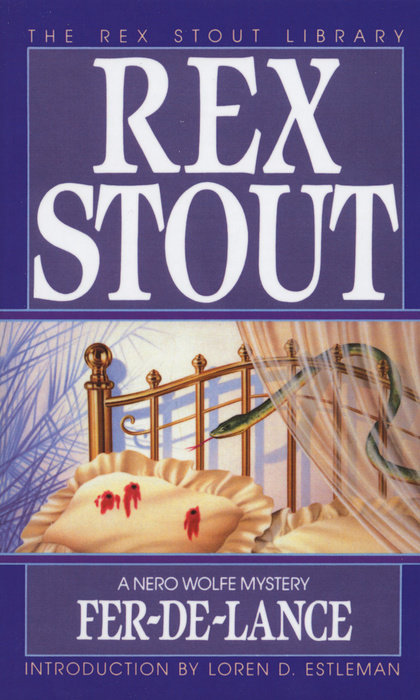