In this essential Star Wars Legends novel, Mace Windu must journey to his long-forgotten homeworld to confront a terrifying mystery with dire personal consequences.

The jungle planet of Haruun Kal, homeworld of the legendary Jedi Master Mace Windu, has become a battleground in the increasing hostilities between the Republic and the renegade Separatist movement. The Jedi Council has sent Depa Billaba—Mace’s former Padawan and fellow Council member—to Haruun Kal to train the local tribesmen as a guerrilla resistance force. But now the Separatists have pulled back, and Depa has not returned. The only clue to her disappearance is a cryptic recording left at the scene of a brutal massacre: a recording that hints of madness and murder, and the darkness in the jungle . . . a recording in Depa’s own voice.

Mace Windu trained Depa. Only he can find her. Only he can learn what has changed her. Only he can stop her. He will leave behind the Republic he serves, the civilization he believes in, everything but his passion for peace and his devotion to his former Padawan. And he will learn the terrible price that must be paid when keepers of the peace are forced to make war. . . .

From THE PRIVATE JOURNALS of Mace Windu

In my dreams, I always do it right.

In my dreams, I ’m on the arena balcony. Geonosis. Orange glare slices shadow from my eyes. Below on the sand: Obi-Wan Kenobi, Anakin Skywalker, Senator Padmé Amidala. On the rough-shaped stone within reach of my arm: Nute Gunray.Within reach of my blade:Jango Fett.

No. Master no more. Count Dooku.

I may never get used to calling him that. Even in dreams.

Jango Fett bristles with weapons.An instinctive killer: the deadliest man in the galaxy. Jango can kill me in less than a second. I know it. Even if I had never seen Kenobi ’s report from Kamino, I can feel the violence Jango radiates: in the Force, a pulsar of death.

But I do it right.

In my dreams, the purple •are of my blade sizzles the gray hairs of
Dooku ’s beard, and in the critical semisecond it takes Jango Fett to aim
and fire, I twitch that blade and take Dooku with me into death.

And save the galaxy from civil war.

Because I knew .I could feel it.

In the swirl of the Force around me, I could feel the connections Dooku had forged among Jango and the Trade Federation, the Geonosians, the hole Separatist movement: connections of greed and fear, of deception and bald intimidation. I did not know what they were —I did not know how Dooku had forged them, or why —but I felt their power: the power of what I now know is a web of treason he had woven to catch the galaxy.

I could feel that without him to maintain its eave, to repair its flaws and double its thinning strands, the web would rot, would shrivel and decay until a mere breath would shred it and scatter its strings into the infinite stellar winds.

Dooku as the shatterpoint.

That is my gift.

Imagine a Corusca gem: a mineral hose interlocking crystalline structure makes it harder than durasteel. You can strike one with a five-kilo hammer and do no more than dent the hammer ’s face. Yet the same cystalline structure that gives the Corusca strength also gives it shatterpoints: spots here a precise application of carefully measured force —no more than a gentle tap —will break it into pieces. But to find these shatterpoints, to use them to shape the Corusca gem into beauty and utility, requires years of study, an intimate understanding of crystal structure, and rigorous practice to train the hand in the perfect
combination of strength and precision to produce the desired cut.

I can see shatterpoints.

The sense is not sight, but see is the closest word Basic has for it: it is a perception, a feel of how hat I look upon fits into the Force, and how the Force binds it to itself and to everything else. I as six or seven standard years old —well into my training in the Jedi Temple—before I realized that other students, full-grown Jedi Knights, even wise
Masters, could sense such connections only with difficulty, and only with concentration and practice. The Force shows me strengths and weaknesses, hidden flaws and unexpected uses. It shows me vectors of stress that squeeze or stretch, torque or shear; it shows me how patterns of these vectors intersect to form the matrix of reality.

Put simply: when I look at you through the Force, I can see where you break.

I looked at Jango Fett on the sand in the Geonosian arena. A perfect combination of weapons, skills, and the will to use them: an interlocking crystal of killer. The Force hinted a shatterpoint, and I left a headless corpse on the sand. The deadliest man in the galaxy.

Situations have shatterpoints, like gems. But those of situations are fluid, ephemeral, appearing for a bare instant, vanishing again to leave no trace of their existence. They are always a function of timing.

If —when —I next encounter Dooku, he will be the war ’s shatterpoint no longer. I can ’t stop this war with a single death.

But on that day in the Geonosian arena, I could have.

Some days after the battle, Master Yoda had found me in a meditation chamber at the Temple.” Your friend he was,” the ancient Master had said, even as he limped through the door. It is a peculiar gift of Yoda ’s that he always seems to know hat I’m thinking. “Respect you owed him. Even affection. Cut him down you could not —not for
merely a feeling.”

But I could have.

Our Order prohibits personal attachments for precisely this reason.
Had I not honored him so —even loved him —the galaxy might be at
peace right no .Merely a feeling, Yoda said.

I have been trained since birth to trust my feelings.

But which feelings should I trust?

When I faced the choice to kill a former Jedi Master, or to save Kenobi and young Skywalker and the Senator ...I let the Force choose for me. I followed my instincts.

I made the Jedi choice.

And so: Dooku escaped. And so: the galaxy is at war. And so: many of my friends have been slaughtered.

Strange: Jedi I am, yet I drown in regret for having spared a life.

Many survivors of Geonosis suffer from nightmares. I have heard tale after tale from the Jedi healers ho have counseled them. Nightmares are inevitable; there has not been such a slaughter of Jedi since the Seth War, four thousand years ago. None of them could have imagined how it would feel to stand in that arena, surrounded by the corpses of their
friends, in the blazing orange noon and the stench and the blood-soaked sand. I may be the only veteran of Geonosis who doesn’t have nightmares of that place.

Because in my dreams, I always do it right.

My nightmare is hat I find hen I wake up.

Matthew Stover is the New York Times bestselling author of the Star Wars novels Revenge of the Sith, Shatterpoint, and The New Jedi Order: Traitor, as well as Caine Black Knife, The Blade of Tyshalle, and Heroes Die. He is an expert in several martial arts. Stover lives outside Chicago. 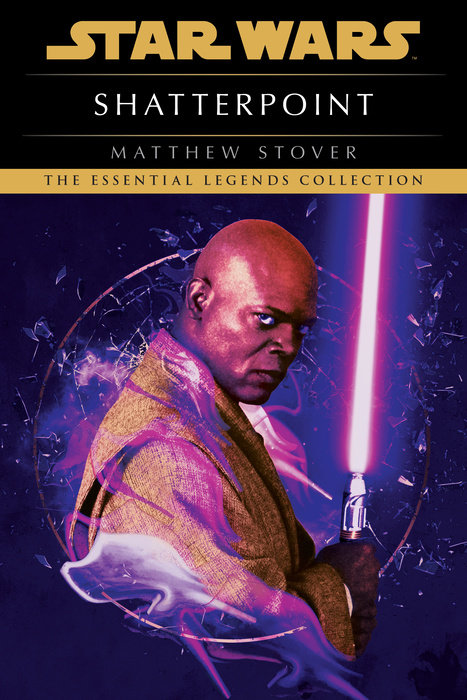