"Eminent Victorians" marked an epoch in the art of biography; it also helped to crack the old myths of high Victorianism and to usher in a new spirit by which chauvinism, hypocrisy and the stiff upper lip were debunked. In it, Strachey cleverly exposes the self-seeking ambitions of Cardinal Manning and the manipulative, neurotic Florence Nightingale; and in his essays on Dr Arnold and General Gordon, his quarries are not only his subjects but also the public-school system and the whole structure of nineteenth-century liberal values.

An excerpt from Eminent Victorians

Henry Edward Manning was born in 1807 and died in 1892. His life was extraordinary in many ways, but its interest for the modern inquirer depends mainly upon two considerations—the light which his career throws upon the spirit of his age, and the psychological problems suggested by his inner history. He belonged to that class of eminent ecclesiastics—and it is by no means a small class—who have been distinguished less for saintliness and learning than for practical ability. Had he lived in the Middle Ages he would certainly have been neither a Francis nor an Aquinas, but he might have been an Innocent. As it was, born in the England of the Nineteenth Century, growing up in the very seed-time of modern progress, coming to maturity with the first onrush of Liberalism, and living long enough to witness the victories of Science and Democracy, he yet, by a strange concatenation of circumstances, seemed almost to revive in his own person that long line of diplomatic and administrative clerics which, one would have thought, had come to an end with Cardinal Wolsey. In Manning, so it appeared, the Middle Ages lived again. The tall gaunt figure, with the face of smiling asceticism, the robes, and the biretta, as it passed in triumph from High Mass at the Oratory to philanthropic gatherings at Exeter Hall, from Strike Committees at the Docks to Mayfair drawing-rooms where fashionable ladies knelt to the Prince of the Church, certainly bore witness to a singular condition of affairs. What had happened? Had a dominating character imposed itself upon a hostile environment? Or was the Nineteenth Century, after all, not so hostile? Was there something in it, scientific and progressive as it was, which went out to welcome the representative of ancient tradition and uncompromising faith? Had it perhaps, a place in its heart for such as Manning—a soft place, one might almost say? Or, on the other hand, was it he who had been supple and yielding? he who had won by art what he would never have won by force, and who had managed, so to speak, to be one of the leaders of the procession less through merit than through a superior faculty for gliding adroitly to the front rank? And, in any case, by what odd chances, what shifts and struggles, what combinations of circumstance and character had this old man come to be where he was? Such questions are easier to ask than to answer; but it may be instructive, and even amusing, to look a little more closely into the complexities of so curious a story.

Undoubtedly, what is most obviously striking in the history of Manning's career is the persistent strength of his innate characteristics. Through all the changes of his fortunes the powerful spirit of the man worked on undismayed. It was as if the Fates had laid a wager that they would daunt him, and in the end they lost their bet.

His father was a rich West India merchant, a governor of the Bank of England, a Member of Parliament, who drove into town every day from his country seat in a coach and four, and was content with nothing short of a bishop for the christening of his children. Little Henry, like the rest, had his bishop; but he was obliged to wait for him—for as long as eighteen months. In those days, and even a generation later, as Keble bears witness, there was great laxity in regard to the early baptism of children. The delay has been noted by Manning's biographer as the first stumbling-block in the spiritual life of the future Cardinal: but he surmounted it with success.

His father was more careful in other ways.

His refinement and delicacy of mind were such [wrote Manning long afterwards] that I never heard out of his mouth a word which might not have been spoken in the presence of the most pure and sensitive,—except [he adds] on one occasion. He was then forced by others to repeat a negro story which, though free from all evil de sexu, was indelicate. He did it with great resistance. His example gave me a hatred of all such talk.

The family lived in an atmosphere of Evangelical piety. One day the little boy came in from the farm-yard, and his mother asked him whether he had seen the peacock. "I said yes, and the nurse said no, and my mother made me kneel down and beg God to forgive me for not speaking the truth." At the age of four the child was told by a cousin of the age of six that "God had a book in which He wrote down everything we did wrong. This so terrified me for days that I remember being found by my mother sitting under a kind of writing-table in great fear. I never forgot this at any time in my life," the Cardinal tells us, "and it has been a great grace to me." When he was nine years old he "devoured the Apocalypse; and I never all through my life forgot the 'lake that burneth with fire and brimstone.' That verse has kept with me like an audible voice through all my life, and through worlds of danger in my youth."

At Harrow the worlds of danger were already around him; but yet he listened to the audible voice. "At school and college I never failed to say my prayers, so far as memory serves me, even for a day." And he underwent another religious experience: he read Paley's Evidences. "I took in the whole argument," wrote Manning, when he was over seventy, "and I thank God that nothing has ever shaken it." Yet on the whole he led the unspiritual life of an ordinary school-boy. We have glimpses of him as a handsome lad, playing cricket, or strutting about in tasselled Hessian top-boots. And on one occasion at least he gave proof of a certain dexterity of conduct which deserved to be remembered. He went out of bounds, and a master, riding by and seeing him on the other side of a field, tied his horse to a gate, and ran after him. The astute youth outran the master, fetched a circle, reached the gate, jumped on to the horse's back, and rode off. For this he was very properly chastised; but of what use was chastisement? No whipping, however severe, could have eradicated from little Henry's mind a quality at least as firmly planted in it as his fear of Hell and his belief in the arguments of Paley.

Lytton Strachey, whose iconoclastic reexaminations of historical figures forever changed the course of modern biographical writing, was born in London on March 1, 1880. He was educated in a series of private schools and attended University College, Liverpool, before entering Trinity College, Cambridge, in 1899. In London he found work as an essayist for various journals and became the drama critic for The Spectator. The favorable reception of his first book, Landmarks in French Literature (1912), bolstered his commitment to writing. Virginia Woolf said: "The figure of Lytton Strachey is so important a figure in the history of biography that it compels a pause. For his three famous books, Eminent Victorians, Queen Victoria, and Elizabeth and Essex, are of a stature to show both what biography can do and what biography cannot do. . . . The anger and the interest that his short studies of Eminent Victorians aroused showed that he was able to make Manning, Florence Nightingale, Gordon, and the rest live as they had not lived since they were actually in the flesh. . . . In the lives of the two great Queens, Elizabeth and Victoria, he attempted a far more ambitious task. Biography had never had a fairer chance of showing what it could do. For it was now being put to the test by a writer who was capable of making use of all the liberties that biography had won." 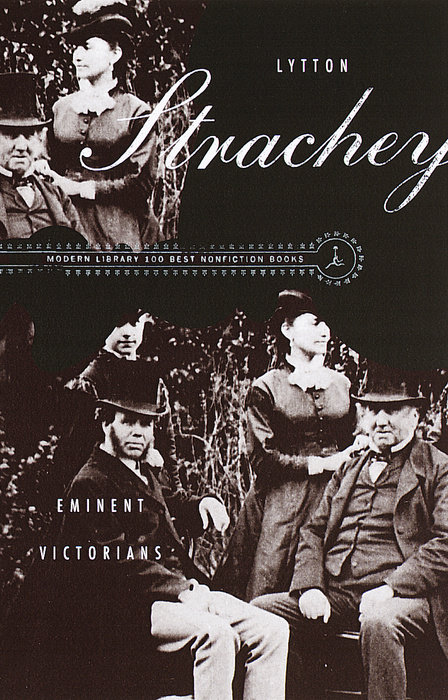