Things That Gain from Disorder

Antifragile is a standalone book in Nassim Nicholas Taleb’s landmark Incerto series, an investigation of opacity, luck, uncertainty, probability, human error, risk, and decision-making in a world we don’t understand. The other books in the series are Fooled by Randomness, The Black Swan, Skin in the Game, and The Bed of Procrustes.

Nassim Nicholas Taleb, the bestselling author of The Black Swan and one of the foremost thinkers of our time, reveals how to thrive in an uncertain world.

Just as human bones get stronger when subjected to stress and tension, and rumors or riots intensify when someone tries to repress them, many things in life benefit from stress, disorder, volatility, and turmoil. What Taleb has identified and calls “antifragile” is that category of things that not only gain from chaos but need it in order to survive and flourish.

In The Black Swan, Taleb showed us that highly improbable and unpredictable events underlie almost everything about our world. In Antifragile, Taleb stands uncertainty on its head, making it desirable, even necessary, and proposes that things be built in an antifragile manner. The antifragile is beyond the resilient or robust. The resilient resists shocks and stays the same; the antifragile gets better and better.

Furthermore, the antifragile is immune to prediction errors and protected from adverse events. Why is the city-state better than the nation-state, why is debt bad for you, and why is what we call “efficient” not efficient at all? Why do government responses and social policies protect the strong and hurt the weak? Why should you write your resignation letter before even starting on the job? How did the sinking of the Titanic save lives? The book spans innovation by trial and error, life decisions, politics, urban planning, war, personal finance, economic systems, and medicine. And throughout, in addition to the street wisdom of Fat Tony of Brooklyn, the voices and recipes of ancient wisdom, from Roman, Greek, Semitic, and medieval sources, are loud and clear.

Antifragile is a blueprint for living in a Black Swan world.

“A bold book explaining how and why we should embrace uncertainty, randomness, and error . . . It may just change our lives.”—Newsweek

An excerpt from Antifragile

Between Damocles and Hydra

Please cut my head off—­How by some magic, colors become colors—­ How to lift weight in Dubai

Half of Life Has No Name

You are in the post office about to send a gift, a package full of champagne glasses, to a cousin in Central Siberia. As the package can be damaged during transportation, you would stamp “fragile,” “breakable,” or “handle with care” on it (in red). Now what is the exact opposite of such situation, the exact opposite of “fragile”?

Almost all people answer that the opposite of “fragile” is “robust,” “resilient,” “solid,” or something of the sort. But the resilient, robust (and company) are items that neither break nor improve, so you would not need to write anything on them—­have you ever seen a package with “robust” in thick green letters stamped on it? Logically, the exact opposite of a “fragile” parcel would be a package on which one has written “please mishandle” or “please handle carelessly.” Its contents would not just be unbreakable, but would benefit from shocks and a wide array of trauma. The fragile is the package that would be at best unharmed, the robust would be at best and at worst unharmed. And the opposite of fragile is therefore what is at worst unharmed.

We gave the appellation “antifragile” to such a package; a neologism was necessary as there is no simple, noncompound word in the Oxford English Dictionary that expresses the point of reverse fragility. For the idea of antifragility is not part of our consciousness—­but, luckily, it is part of our ancestral behavior, our biological apparatus, and a ubiquitous property of every system that has survived.

To see how alien the concept is to our minds, repeat the experiment and ask around at the next gathering, picnic, or pre-­riot congregation what’s the antonym of fragile (and specify insistently that you mean the exact reverse, something that has opposite properties and payoff). The likely answers will be, aside from robust: unbreakable, solid, well-­built, resilient, strong, something-­proof (say, waterproof, windproof, rustproof)—­ unless they’ve heard of this book. Wrong—­and it is not just individuals but branches of knowledge that are confused by it; this is a mistake made in every dictionary of synonyms and antonyms I’ve found.

This blind spot seems universal. There is no word for “antifragility” in the main known languages, modern, ancient, colloquial, or slang. Even Russian (Soviet version) and Standard Brooklyn English don’t seem to have a designation for antifragility, conflating it with robustness.

If we have no common name for antifragility, we can find a mythological equivalence, the expression of historical intelligence through potent metaphors. In a Roman recycled version of a Greek myth, the Sicilian tyrant Dionysius II has the fawning courtier Damocles enjoy the luxury of a fancy banquet, but with a sword hanging over his head, tied to the ceiling with a single hair from a horse’s tail. A horse’s hair is the kind of thing that eventually breaks under pressure, followed by a scene of blood, high-­pitched screams, and the equivalent of ancient ambulances. Damocles is fragile—­it is only a matter of time before the sword strikes him down.

In another ancient legend, this time the Greek recycling of an ancient Semitic and Egyptian legend, we find Phoenix, the bird with splendid colors. Whenever it is destroyed, it is reborn from it own ashes. It always returns to its initial state. Phoenix happens to be the ancient symbol of Beirut, the city where I grew up. According to legend, Berytus (Beirut’s historical name) has been destroyed seven times in its close to five-­thousand-­year history, and has come back seven times. The story seems cogent, as I myself saw the eighth episode; central Beirut (the ancient part of the city) was completely destroyed for the eighth time during my late childhood, thanks to the brutal civil war. I also saw its eighth rebuilding.

But Beirut was, in its latest version, rebuilt in even better shape than the previous incarnation—­and with an interesting irony: the earthquake of a.d. 551 had buried the Roman law school, which was discovered, like a bonus from history, during the reconstruction (with archeologists and real estate developers trading public insults). That’s not Phoenix, but something else beyond the robust. Which brings us to the third mythological metaphor: Hydra.

Hydra, in Greek mythology, is a serpent-­like creature that dwells in the lake of Lerna, near Argos, and has numerous heads. Each time one is cut off, two grow back. So harm is what it likes. Hydra represents antifragility.

The sword of Damocles represents the side effect of power and success: you cannot rise and rule without facing this continuous danger—­ someone out there will be actively working to topple you. And like the sword, the danger will be silent, inexorable, and discontinuous. It will fall abruptly after long periods of quiet, perhaps at the very moment one has gotten used to it and forgotten about its existence. Black Swans will be out there to get you as you now have much more to lose, a cost of success (and growth), perhaps an unavoidable penalty of excessive success. At the end, what matters is the strength of the string—­not the wealth and power of the dining party. But, luckily, this is an identifiable, measurable, and tractable vulnerability, for those who want to listen. The entire point of the Triad is that in many situations we can measure the strength of the string.

Further, consider how toxic such growth-­followed-­by-­a-­fall can be to society, as the fall of the dining guest, in response to the fall of the sword of Damocles, will bring what we now call collateral damage, harming others. For instance, the collapse of a large institution will have effects on society.

Sophistication, a certain brand of sophistication, also brings fragility to Black Swans: as societies gain in complexity, with more and more “cutting edge” sophistication in them, and more and more specialization, they become increasingly vulnerable to collapse. This idea has been brilliantly—­and convincingly—­adumbrated by the archeologist Joseph Tainter. But it does not have to be so: it is so only for those unwilling to go the extra step and understand the matrix of reality. To counter success, you need a high offsetting dose of robustness, even high doses of antifragility. You want to be Phoenix, or possibly Hydra. Otherwise the sword of Damocles will get you.

On the Necessity of Naming

We know more than we think we do, a lot more than we can articulate. If our formal systems of thought denigrate the natural, and in fact we don’t have a name for antifragility, and fight the concept whenever we use our brains, it does not mean that our actions neglect it. Our perceptions and intuitions, as expressed in deeds, can be superior to what we know and tabulate, discuss in words, and teach in a classroom. We will have ample discussions of the point particularly with the potent notion of the apophatic (what cannot be explicitly said, or directly described, in our current vocabulary); so for now, take this curious phenomenon.

In Through the Language Glass, the linguist Guy Deutscher reports that many primitive populations, without being color-­blind, have verbal designations for only two or three colors. But when given a simple test, they can successfully match strings to their corresponding colors. They are capable of detecting the differences between the various nuances of the rainbow, but they do not express these in their vocabularies. These populations are culturally, though not biologically, color-­blind.

Just as we are intellectually, not organically, antifragility-­blind. To see the difference just consider that you need the name “blue” for the construction of a narrative, but not when you engage in action.

It is not well known that many colors we take for granted had no name for a long time, and had no names in the central texts in Western culture. Ancient Mediterranean texts, both Greek and Semitic, also had a reduced vocabulary of a small number of colors polarized around the dark and the light—­Homer and his contemporaries were limited to about three or four main colors: black, white, and some indeterminate part of the rainbow, often subsumed as red, or yellow.

I contacted Guy Deutscher. He was extremely generous with his help and pointed out to me that the ancients even lacked words for something as elementary as blue. This absence of the word “blue” in ancient Greek explains the recurring reference by Homer to the “wine-­dark sea” (oinopa ponton), which has been quite puzzling to readers (including this one).

Nassim Nicholas Taleb spent twenty-one years as a risk taker before becoming a researcher in philosophical, mathematical, and (mostly) practical problems with probability. Although he spends most of his time as a flâneur, meditating in cafés across the planet, he is currently Distinguished Professor at New York University’s Tandon School of Engineering. His books, part of a multivolume collection called Incerto, have been published in forty-one languages. Taleb has authored more than fifty scholarly papers as backup to Incerto, ranging from international affairs and risk management to statistical physics. Having been described as “a rare mix of courage and erudition,” he is widely recognized as the foremost thinker on probability and uncertainty. Taleb lives mostly in New York.

Things That Gain from Disorder 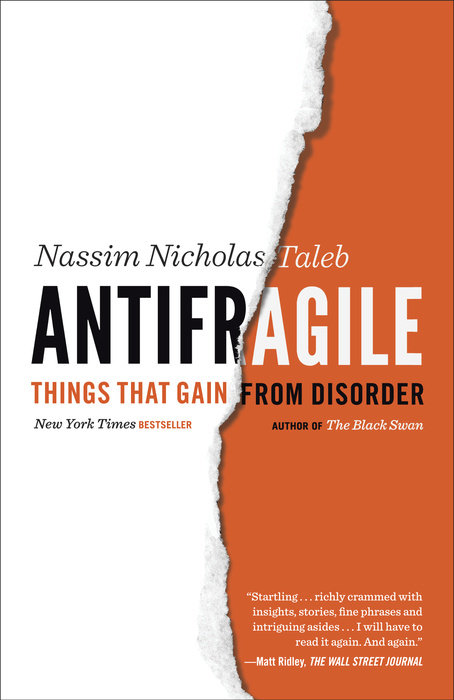