The most accessible and informative version of the Buddhist classic available in English, with instruction in meditation, illuminating commentary, and guidance in the practical use of the prayers

The so-called “Tibetan Book of the Dead” has been renowned for centuries as a cornerstone of Buddhist wisdom and religious thought. More recently, it has become highly influential in the Western world for its psychological insights into the processes of death and dying—and what they can teach us about the ways we live our lives. It has also been found to be helpful in the grieving process by people who have recently lost their loved ones.

Composed in the eighth century C.E., it is intended to prepare the soul for the trials and transformations of the afterworld. Its profound message is that the art of dying is as important as the art of living. Drawing on Tibetan spiritual traditions, it shows us the workings of the mind in its various manifestations—terrifying and comforting, wrathful and beautiful—which appear more clearly after death in the consciousness of the deceased. By recognizing these manifestations, we can attain a state of enlightenment, both in this existence and in the existence to come.

This authoritative translation preserves the form and spirit of the original and was prepared especially for Western readers by Robert A. F. Thurman, one of the most prominent Tibetan scholars in America and a close associate of His Holiness the Dalai Lama’s.

An excerpt from The Tibetan Book of the Dead

AN OUTLINE OF TIBETAN HISTORY

The Tibetans have always called their own country Bö, on some occasions adding Khawajen, “Land of Snows.” Their own recorded history dates back some 2300 years, to the time of the Macedonian Greek empire in the west, the Mauryan empire in India, and the late Chou empire in China. During Tibet’s first eight centuries, it was ruled by a military dynasty. It had an animistic religious system, run by a priesthood of shamans adept in divination, sorcery, and sacrifice. Its polity centered on a royal family believed to have descended from the heavens. The first seven kings came down to rule on a magical ladder hanging in space, up which they would return when their time had come to die. Due to some conflict in the palace, the eighth king cut the sky rope, and the kings thereafter, like the pharaohs of Egypt, were interred in large burial mounds, along with possessions and companions.

The early dynasty was centered in the Yarlung Valley, a river valley running south from the eastward flowing Tsang-chu (the Brahmaputra), near present-day Tsetang. Gradually, over the centuries, the dynasty added tribes and territories to its domain, uniting the lords of neighboring kingdoms in a feudal, military network. The tribes they unified were already tied by three main common bonds: their territory, language, and religious tendency. They all inhabited the approximately one-million-square-mile Tibetan plateau, with an average altitude of 13,000 to 14,000 feet. Living successfully at such an altitude involves a complex physiological adaptation. To be comfortable there, you really have to be born there from a lineage long acclimatized. The Tibetan language belongs to the Tibeto-Burman language family, a family distinct from the Indic, Dardic, Turkic, Mongolian, and Sinitic language families of the surrounding lowland areas. Religiously, Tibetans tended to deify elements of nature, especially mountains and sky, and shared a complex set of rituals of sacrifice, divination, and propitiation of a diverse pantheon of underworld, landscape, and celestial deities.

The high-altitude culture was distinguished from those around it by its more “spiritual” orientation. Lifespans at high altitude are somewhat shortened, and the stark and spectacular mountain landscape is conducive to reflection and contemplation. In the early centuries, this spirituality was practical in outlook. Like most shamanisms, it sought mundane success, victory, health, wealth, and progeny. During the period of military expansion, it seems to have focused on a cult of kingship, run by shamanic adept priests. Since the king had descended from heaven as a divinity on earth, he guaranteed power and order. The shaman assisted this order by inviting the king’s descent, celebrating his presence, securing the cooperation of the deities in the heavens, lands, and underworld, and managing the transition from the old king to the new. The shaman was required to travel to the land of the dead and back, in order to gain personal experience of the period of chaos between reigns. His role was to draw on the power of chaos while keeping it in its place, assuring its continuing separation from the land of the living, the realm of order.

The Tibetan dynastic culture was quite successful for many centuries. Rival kingdoms from surrounding lowlands could not intrude for long on the high plateau, so it was allowed to develop without interference. The Tibetans’ struggles with their natural environment and with each other strengthened them, and by the sixth century they had unified the highland and become an empire to be reckoned with. They began to mount campaigns in all directions into the lowlands. At this time they developed a fearsome reputation among the Chinese, Turkish, Mongolian, Persian, and Indic peoples.

In the early seventh century, an emperor named Songzen Gambo reached the militaristic empire’s natural limits. Unity among warlords is always tenuous, and the high-altitude Tibetans had no interest in further expansion outward into the lowlands. He began transforming the civilization from feudal militarism to something more peaceful and spiritual, based on the people’s cultivated moral outlook. In working on this transformation, Songzen Gambo investigated the major civilizations of outer (from his perspective) Asia, and noted that Universalist (Mahayana) Buddhism provided the cultural backbone of the Pala and post-Gupta dynasties of India, the silk route city states of central Asia, and the T’ang dynasty of China. So he began a systematic process of cultural adaptation. He sent a team of scholars to India to learn Sanskrit, create a written language for Tibetan, and begin to translate the vast Buddhist literature. He married nine princesses from different surrounding countries, including Nepal and T’ang China, requesting each to bring Buddhist artifacts and texts with her to Tibet. He built a geomantic system of imperial temples, centered on the Jokhang and Ramoche cathedrals in his new capital at Lhasa, with a network of branch temples creating a pattern of sacredness to contain the nation.

For the next two and a half centuries, his successors continued his work of cultural transformation, sponsoring translations, holding research conferences, building institutions, and educating their subjects. This process reached a high point during the 790s, in the reign of Emperor Trisong Detsen, who, with the help of the Indian adept Padma Sambhava and the Indian Buddhist abbot Shantarakshita, built the first monastery at Samye. Here the Indian Buddhist university structure and curriculum were transplanted, and a sixty-year process of collecting all the useful knowledge then available in Asia was begun. Mathematics, poetry, medicine, the art of government, art and architecture—all these branches of learning were cultivated, not only Buddhist philosophy and psychology. Scholars were invited from Persia, India, Uighuria, Mongolia, the silk route states, and T’ang China, and Tibetans became skilled at comparison and combination, in their quest for the best understanding of man and nature. For example, during the 830s, hundreds of scholars from all over the known world spent a decade comparing the medical systems of India, China, Persia, Mongolia, and Uighuria, creating a Tibetan medical system that integrated the best available psychology, anatomy, neurology, surgery, botany, chemistry, and nutrition with Buddhist spiritual technology.

After this high point of Samye’s ascendancy, a period of confusion ensued, precipitated by excessive pressure from the emperors in their injection of Buddhist perspectives and practices into all facets of life. There was a revolt within the royal family itself. A series of assassinations and coups ended with the collapse of the dynasty, the regional fragmentation of the nation, and the temporary suppression of Buddhism. Within a century, however, Buddhist insights and institutions re-emerged, now rooted among the people, with sponsorship from regional rulers. For the next three centuries, Tibetans more and more turned their interests toward Buddhist education, and monasteries were built all over the country. The vast work of translation was completed and a voluminous indigenous literature was developed. No new royal dynasty emerged to control the whole country. Tibetan militarism was unable to return due to the power of Buddhism and its morality of nonviolence. Local noble families still ruled regional areas, but more and more they shared even their social and political power with the rapidly developing monastic institutions.

During the thirteenth and fourteenth centuries, the Mongolian empire unified most of Eurasia, and Tibet was formally incorporated within the Pax Mongolica. In reality, it was very little changed, divided into thirteen main administrative regions, each run by a combination of a local ruling family and a local monastic hierarchy. The Sakya hierarchy and the Khon family were formally put in charge over all by Khubilai Khan, but the Sakya hierarch was more of a spiritual figurehead than an active administrator. Toward the end of the fourteenth century, the Mongol empire fell apart, and the native Tibetan dynasty of Pagmodru asserted control over Tibet. At the same time, a spiritual renaissance was ushered in by the life work of Lama Jey Tsong Khapa. The new era of national dedication to the practice of Buddhism as the main aim of life was sealed by his founding the Great Prayer Festival in Lhasa in 1409. He offered celestial ornaments to the Jowo Rinpoche image of Shakyamuni Buddha enshrined in the Jokhang cathedral, to symbolize the nation’s realization of the eternal presence of the Buddha. A tradition thus began for the whole nation to come together for two weeks of prayer and celebration every lunar new year. The keys of the city were turned over to the monastic abbots, and all ordinary business was suspended. This festival was a core event for all Tibet from 1409 until 1960, when the Chinese occupation stopped it by force.

Robert Thurman, acclaimed translator of The Tibetan Book of the Dead and author of Inner Revolution, is the Jey Tsong Khapa Professor of Indo-Tibetan Buddhist Studies in the department of religion at Columbia University and is the director of the American Institute of Buddhist Studies. He is a friend of the Dalai Lama’s, president of Tibet House U.S., and one of the most visible and respected Buddhist scholars and thinkers in the West. 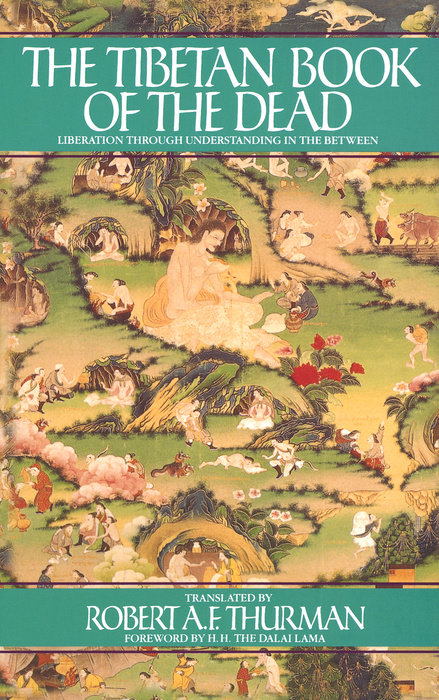