Three masterpieces of medieval poetry, translated by the author of The Lord of the Rings—including Sir Gawain and the Green Knight, the poem that inspired the major motion picture The Green Knight

Comparable to the works of Chaucer, Sir Gawain and the Green Knight, Pearl, and Sir Orfeo weave a bright tapestry of stories from a remote age of chivalry and wizards, knights and holy quests—but unlike The Canterbury Tales, the name of the poet who wrote them is lost to time. Masterfully translated from the original Middle English by J.R.R. Tolkien, the language of these great poems comes to life for modern readers.

At the center of this collection is Sir Gawain and the Green Knight, a tale as lush and dark as England’s medieval forests. Mixing romance and adventure, Sir Gawain follows King Arthur’s most noble knight on an adventure of epic enchantment, temptation, and destiny.

An excerpt from Sir Gawain and the Green Knight, Pearl, Sir Orfeo

When the siege and the assault had ceased at Troy,

and the fortress fell in flame to firebrands and ashes,

the traitor who the contrivance of treason there fashioned

was tried for his treachery, the most true upon earth—

it was Æneas the noble and his renowned kindred

who then laid under them lands, and lords became

of well-nigh all the wealth in the Western Isles.

When royal Romulus to Rome his road had taken,

in great pomp and pride he peopled it first,

and named it with his own name that yet now it bears;

and far over the French flood Felix Brutus

on many a broad bank and brae Britain established

where strange things, strife and sadness,

at whiles in the land did fare,

and each other grief and gladness

oft fast have followed there.

And when fair Britain was founded by this famous lord,

bold men were bred there who in battle rejoiced,

and many a time that betid they troubles aroused.

In this domain more marvels have by men been seen

than in any other that I know of since that olden time;

but of all that here abode in Britain as kings

ever was Arthur most honoured, as I have heard men tell.

Wherefore a marvel among men I mean to recall,

a sight strange to see some men have held it,

one of the wildest adventures of the wonders of Arthur.

If you will listen to this lay but a little while now,

as it is fixed and fettered

in story brave and bold,

as was loved in this land of old.

This king lay at Camelot at Christmas-tide

with many a lovely lord, lieges most noble,

indeed of the Table Round all those tried brethren,

amid merriment unmatched and mirth without care.

There tourneyed many a time the trusty knights,

then to the court they came at carols to play.

For there the feast was unfailing full fifteen days,

with all meats and all mirth that men could devise,

such gladness and gaiety as was glorious to hear,

din of voices by day, and dancing by night;

all happiness at the highest in halls and in bowers

had the lords and the ladies, such as they loved most dearly.

With all the bliss of this world they abode together,

the knights most renowned after the name of Christ,

and the ladies most lovely that ever life enjoyed,

and he, king most courteous, who that court possessed.

For all that folk so fair did in their first estate

Under heaven the first in fame,

their king most high in pride;

it would now be hard to name

a troop in war so tried.

While New Year was yet young that yestereve had arrived,

that day double dainties on the dais were served,

when the king was there come with his courtiers to the hall,

and the chanting of the choir in the chapel had ended.

With loud clamour and cries both clerks and laymen

Competed for those presents in playful debate;

ladies laughed loudly, though they lost the game,

and he that won was not woeful, as may well be believed.

All this merriment they made, till their meat was served;

then they washed, and mannerly went to their seats,

ever the highest for the worthiest, as was held to be best.

Queen Guinevere the gay was with grace in the midst

of the adorned dais set. Dearly was it arrayed:

finest sendal at her sides, a ceiling above her

of true tissue of Tolouse, and tapestries of Tharsia

that were embroidered and bound with the brightest gems

one might prove and appraise to purchase for coin

That loveliest lady there

on them glanced with eyes of grey;

that he found ever one more fair

But Arthur would not eat until all were served;

his youth made him so merry with the moods of a boy,

he liked lighthearted life, so loved he the less

so worked on him his young blood and wayward brain.

And another rule moreover was his reason besides

that in pride he had appointed: it pleased him not to eat

upon festival so fair, ere he first were apprised

of some strange story or stirring adventure,

or some moving marvel that he might believe in

or a challenger should come a champion seeking

to join with him in jousting, in jeopardy to set

his life against life, each allowing the other

the favour of fortune, were she fairer to him.

This was the king’s custom, wherever his court was holden,

at each famous feast among his fair company

So his face doth proud appear,

and he stands up stout and tall,

all young in the New Year;

much mirth he makes with all.

Thus there stands up straight the stern king himself,

talking before the high table of trifles courtly.

There good Gawain was set at Guinevere’s side,

with Agravain a la Dure Main on the other side seated,

Bishop Baldwin had the honour of the board’s service,

and Iwain Urien’s son ate beside him.

These dined on the dais and daintily fared,

and many a loyal lord below at the long tables.

Then forth came the first course with fanfare of trumpets,

on which many bright banners bravely were hanging;

noise of drums then anew and the noble pipes,

so that many hearts rose high hearing their playing.

Then forth was brought a feast, fare of the noblest,

multitude of fresh meats on so many dishes

that free places were few in front of the people

to set the silver things full of soups on cloth

Each lord of his liking there

without lack took with delight:

twelve plates to every pair, good beer and wine all bright.

Now of their service I will say nothing more,

for you are all well aware that no want would there be.

Another noise that was new drew near on a sudden,

so that their lord might have leave at last to take food.

For hardly had the music but a moment ended,

and the first course in the court as was custom been served,

when there passed through the portals a perilous horseman,

the mightiest on middle-earth in measure of height,

from his gorge to his girdle so great and so square,

and his loins and his limbs so long and so huge,

that half a troll upon earth I trow that he was,

but the largest man alive at least I declare him;

and yet the seemliest for his size that could sit on a horse,

for though in back and in breast his body was grim,

both his paunch and his waist were properly slight,

and all his features followed his fashion so gay

for at the hue men gaped aghast

in his face and form that showed;

as a fay-man fell he passed,

and green all over glowed.

All of green were they made, both garments and man:

a coat tight and close that clung to his sides;

a rich robe above it all arrayed within

of handsome ermine gay, as his hood was also,

that was lifted from his locks and laid on his shoulders;

that clung to his calves; and clear spurs below

of bright gold on silk broideries banded most richly,

though unshod were his shanks, for shoeless he rode.

And verily all this vesture was of verdure clear,

both the bars on his belt, and bright stones besides

that were richly arranged in his array so fair,

set on himself and on his saddle upon silk fabrics:

that were embroidered upon them, what with birds and with flies

in a gay glory of green, and ever gold in the midst.

The pendants of his poitrel, his proud crupper,

his molains, and all the metal to say more, were enamelled,

even the stirrups that he stood in were stained of the same;

and his saddlebows in suit, and their sumptuous skirts,

which ever glimmered and glinted all with green jewels;

even the horse that upheld him in hue was the same,

a green horse great and thick,

a stallion stiff to quell,

he matched his master well.

John Ronald Reuel Tolkien was born on January 3, 1892, in Bloemfontein, South Africa. After serving in World War I, he embarked upon a distinguished academic career and was recognized as one of the finest philologists in the world. He was a professor of Anglo-Saxon at Oxford, a fellow of Pembroke College, and a fellow of Merton College until his retirement in 1959. He is, however, beloved throughout the world as the creator of Middle-earth and author of such classic works as The Hobbit and The Lord of the Rings. He died on September 2, 1973, at the age of eighty-one. 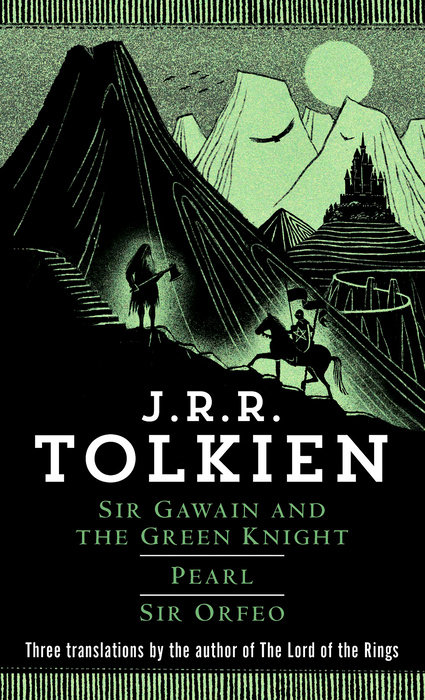