Venture into the imagination of J.R.R. Tolkien with these classic fantasies that dazzle and delight.

“Like The Hobbit, this is first and foremost a goodtale—dense and engrossing, full of unexpectedturns. . . . It is both homely and haunting, and in its way, almost literally bewitching.”—The New York Times Book Review

“A short prose meditation on the gift of fantasy, what it is, whence it comes, and what it means to the life and character of the man who receives it.”—Paul H. Kocher, author of Master of Middle-earth

This short story is a delightfully ribald mock-heroic tale. When a “cunning, inquisitive, greedy, well-armored but not overly bold” dragon invades a kingdom, a most unwilling Farmer Giles is chosen to slay the dragon . . . a dragon who refuses to fight.

An excerpt from Smith of Wootton Major & Farmer Giles of Ham

There was a village once, not very long ago for those with long memories, nor very far away for those with long legs. Wootton Major it was called because it was larger than Wootton Minor, a few miles away deep in the trees; but it was not very large, though it was at that time prosperous, and a fair number of folk lived in it, good, bad, and mixed, as is usual.

It was a remarkable village in its way, being well known in the country round about for the skill of its workers in various crafts, but most of all for its cooking. It had a large Kitchen which belonged to the Village Council, and the Master Cook was an important person. The Cook’s House wand the Kitchen adjoined the Great Hall, the largest and oldest building in the place and the most beautiful. It was built of good stone and good oak and was well tended though it was no longer painted or gilded as it had been once upon a time. In the Hall the villagers held their meetings and debates, and their public feasts, and their family gatherings. So the Cook was kept busy, since for all these occasions he had to provide suitable fare. For the festivals, of which there were many in the course of a year, the fare that was thought suitable was plentiful and rich.

There was one festival to which all looked forward, for it was the only one held in winter. It went on for a week, and on its last day at sundown there was a merrymaking called The Feast of Good Children, to which not many were invited. No doubt some who deserved to be asked were overlooked, and some who did not were invited by mistake; for that is the way of things, however careful those who arrange such matters may try to be. In any case it was largely by chance of birthday that any child came in for the Twenty-four Feast, since that was only held once in twenty-four years, and only twenty-four children were invited. For that occasion the Master Cook was expected to do his best, and in addition to many other good things it was the custom for him to make the Great Cake. By the excellence (or otherwise) of this his name was chiefly remembered, for a Master Cook seldom if ever lasted long enough in office to make a second Great Cake.

There came a time, however, when the reigning Master Cook, to everyone’s surprise, since it had never happened before, suddenly announced that he needed a holiday; and he went away, no one knew where; and when he came back some months later he seemed rather changed. He had been a kind man who liked to see other people enjoying themselves, but now he was himself serious, and said very little. Now he was merrier, and often said and did laughable things; and at feasts he would himself sing gay songs, which was not expected of Master Cooks. Also he brought back with him an apprentice; and that astonished the village.

It was not astonishing for the Master Cook to have an apprentice. It was usual. The Master chose one in due time, and he taught him all that he could; and as they both grew older the apprentice took on more of the important work, so that when the Master retired or died there he was, ready to take over the office and become Master Cook in his turn. But this Master had never chosen and apprentice. He had always said “time enough yet,” or “I’m keeping my eyes open and I’ll choose one when I find one to suit me,” But now he brought with him a mere boy, and not one from the village. He was more lithe than the Wootton lads and quicker, soft-spoken and very polite, but ridiculously young for the work, barely in his teens by the look of him. Still, choosing his apprentice was the Master Cook’s affair, and no one had the right to interfere in it; so the boy remained and stayed in the Cook’s House until he was old enough to find lodgings for himself. People soon became used to seeing him about, and he made a few friends. They and the Cook called him Alf, but to the rest he was just Prentice.

The next surprise came only three years later. One spring morning the Master Cook took off his tall white hat, folded up his clean aprons, hung up his white coat, took a stout ash stick and a small bag, and departed. He said goodbye to the apprentice. No one else was about.

“Goodbye for now, Alf,” he said. “I leave you to manage things as best you can, which is always very well. I expect it will turn out all right. If we meet again, I hope to hear all about it. Tell them that I’ve gone on another holiday, but this time I shan’t be coming back again.”

There was quite a stir in the village when Prentice gave this message to people who came to the Kitchen. “What a thing to do!” they said. “And without a warning or farewell! What are we going to do without any Master Cook? He has left no one to take his place.” In all their discussions no one ever thought of making young Prentice into Cook. He had grown a bit taller but still looked like a boy, and he had only served for three years.
In the end for lack of anyone better they appointed a man of the village, who could cook well enough in a small way. When he was younger he had helped the Master at busy times, but the Master had never taken to him and would not have him as apprentice. He was now a solid sort of man with a wife and children, and careful with money. “At any rate he won’t go off without notice,” they said, “and poor cooking is better than none. It is seven years till the next Great Cake, and by that time he should be able to manage it.”

Nokes, for that was his name, was very pleased with the turn things had taken. He had always wished to be Master Cook, and had never doubted that he could manage it. For some time, when he was alone in the Kitchen, he used to put on the tall white hat and look at himself in a polished frying pan and say: “How do you do, Master. That hat suits you properly, might have been made for you. I hope things go well with you.” 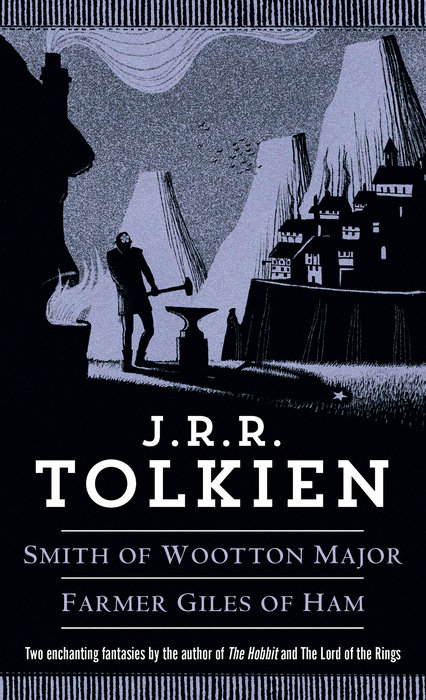