Poems and prose, maps and chronologies, detours and diversions along the road to Middle-earth . . . Christopher Tolkien has gathered archival materials that his late father, J. R. R. Tolkien, used to create the world and the history behind his classic stories.

This fourth volume of The History of Middle-earth presents early versions of those first tales, from the creation myth to the fall of Morgoth. Writings include a chronology of the events in Beleriand, the first Silmarillion map, and the only known description of the physical nature of Middle-earth's universe. Detailed annotations highlight changes ranging from the spelling of Elvish names to pivotal emendations whose effects reach even to the war of the ring.
The Shaping of Middle-earth presents a solid framework by which to trace the development of the early lore of Middle-earth. It is a truly indispensable reference work for those familiar with the history of that endlessly beloved land--and fascinating reading for those just entering that world.

An excerpt from The Shaping of Middle-earth

Before giving the ‘Sketch of the Mythology’, the earliest form of the prose ‘Silmarillion’, there are some brief prose texts that can be conventiently collected here.

Among loose papers there is an early piece, soon abandoneed, entitled Turlin and the Exiles of Gondolin. It will be seen that it relates closely to the beginning of the tale of The Fall of Gondolin (II. 149) but at the same time contains much that is new. That it was the beginning of a later version of the tale is clear at once from the name Mithrim, for this only replaced Asgon by emendation in the final text of The Fall of Gondolin (II. 202). This brief text reads as follows. At the first three occurrences of the name Turlin in the narrative (but not in the title ) it was emended to Turgon; at the fourth and fifth Turgon was so written from the first. I give Turgon throughout.

‘Then’ said Ilfiniol son of Bronweg }know that Ulmo Lord of Waters forgot never the sorrows of the Elfin kindreds beneath the power of Melko, but he might do little because of the anger of the other Gods who shut their hearts against the race of the Gnomes, and dwelt behind the veiled hills of Valinor heedless of the Outer World, so deep was their ruth and regret for the death of the Two Trees. Nor did any save Ulmo only dread the power of Melko that wrought ruin and sorrow over all the Earth; but Ulmo desired that Valinor should gather all its might to quench his evil ere it be too late, and him seemed that both purposes might perchance be achieved if messengers from the Gnomes should win to Valinor and plead for pardon and for pity upon the Earth; for the love of Palúrien and Oromë her son for those wide realms did slumber still. Yet hard and evil was the road from the Outer Earth to Valinor, and the Gods themselves had meshed the ways with magic and veiled the encircling hills. Thus did Ulmo seek unceasingly to stir the Gnomes to send messengers unto Valinor, but Melko was cunning and very deep in wisdom, and unsleeping was his wariness in all things that touched the Elfin kindreds, and their messengers overcame not the perils and temptations of that longest and most evil of all roads, and many that dared to set forth were lost forever.

Now tells the tale how Ulmo despaired that any of the Elfin race should surpass the dangers of the way, and of the deepest and the latest design that he then fashioned, and of those things which came of it.

In those days the greater part of the kindreds of Men dwelt after the Battle of Unnumbered Tears in that land of the North that has many names, but which the Elves of Kôr have named Hisilómë which is the Twilit Mist, and the Gnomes, who of the Elf-kin know it best, Dor-Lómin the Land of Shadows. A poeople mighty in numbers were there, dwelling about the wide pale waters pf Mithrim the great lake that lies in those regions, and other folk named them Tunglin of folk of the Harp, for their joy was in the wild music and minstrelsy of the fells and woodlands, but they knew not and sang not of the sea. Now this folk came into those places after the dread battle, being too late summoned thither from afar, and they bore no stain of treachery against the Elfin kin; but indeed many among them clung to such friendship with the hidden Gnomes of the mountains and Dark Elves as might be still for the sorrow and mistrust born of those ruinous deeds in the Vale of Niniach. Turgon was a man of that folk, son of Peleg, son of Indor, son of [Ear>] Fengel who was their chief and hearing the summons had marched out of thte deeps of the East with all his folk. But Turgon dwelt not much with his kindred, and loved rather solitude and the friendship of the Elves whose tongues he knew, and he wandered alone about the long shores of Mothrim, now hunting in its woods, now making sudden music ibn the rocks upon his rugged harp of wood strung with the sinews of bears. But he sang not for the ears of Men, and many hearing the power of his rough songs came from afar to hearken to his harping; [?but] Turgon left his singing and departed to lonely places in the mountains.

Many strange things he learned there, broken tidings of far off things, and longing came upon him for deeper lore, but as yet his heart turned not from the long shores, and the pale waters of Mithrim in the mists. Yet he was not fated to dwell for ever in those places, for ’tis said that magic and destiny led him on a day to a cavernous opening in the rocks down which a hidden river flowed from Mithrim. And Turgon entered that cavern seeking to learn its secret, but having entered the waters of Mithrim drave him forward into the heart of the rock vand he might not win back into the light. This men said was not without the will of Ulmo, at whose prompting may be the Gnomes had fashioned that deep and hidden way. Then came the Gnomes to Turgon and guided him along the dark passages amid the mountains until he came out once more into the light.

The text ends here (though manuscript pages written at the same time continue on another subject, see (iii) below).

Turlin must have been a passing shift from Tuor (cf. The form Tûr that appears in texts of The Fall of Gondolin, II. 147), and Turgon likewise; in the Tale Turgon is of course the name of the King of Gondolin. This curious passing reference of a primary name in the legends may be compared with the brief substitution of Celegorm for Thingol and Maglor for Beren in the Lay of Leithian (III. 159).

Particularly interesting is the account here of the origins of Tuor’s people; they came out of the East to the Battle of Unnumbered Tears, but they came too late. This can hardly be wholly unconnected with the coming of the Easterlings before the battle in the later story. The geneology of Tuor (Turlin, Turgon) is here ‘son of Peleg, son of Indor son of Fengel’. In The Fall of Gondolin he is ‘son of Peleg son of Indor’ (II. 160); in the fragment of the Lay of the Fall of Gondolin he is the son of Fengel, and in associated notes Tuor is himself called Fengel (III. 145). His people are here the Tunglin, the folks of the Harp, whereas in The Fall of Gondolin (ibid.) he belongs to ‘the house of the Swan of the sons of the Men of the North’.

Also noteworthy is the opening of the present text where Ulmo’s desires and devisings are described: his unceasing attempts to persuade the Gnomes to send messengers to Valinor, his isolation from the other Valar, his wish that the power of Valinor should go against Melko in time. There does not appear to be any other mention of Ulmo’s attempting to arouse the Gnomes to send messages to Valinor; and though his isolation in his pity for the Gnomes in the Great Lands appears strongly at the beginning of the talke of The Hiding of Valinor (I. 209), there Manwë and Varda beside Ulmo were opposed to the withdrawal of Valinor from the fate of ‘the world’.

Lastly, ‘the Vale of Niniach’ must be the site of the Battle of Unnumbered Tears; cf. ‘the Vale (Valley) of Weeping Waters’ in the outlines for Gilfanon’s Tale (I. 238—40). Niniach never occurs again in this application, though the way by which Tuor went down to the sea came to be called Cirith Ninniach, the Rainbow Cleft. 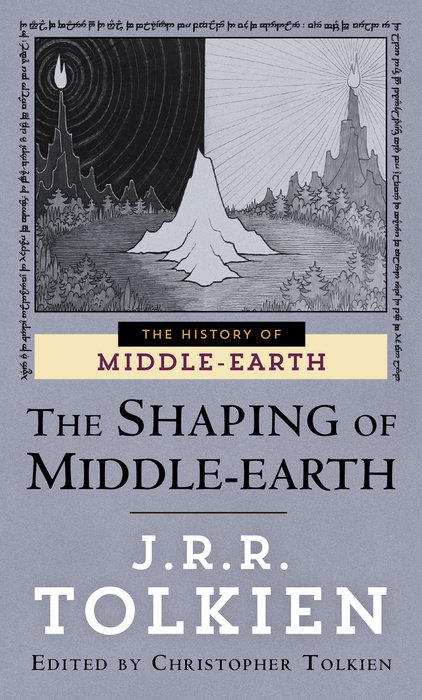