The sun is setting on humanity. The night now belongs to voracious demons that prey upon a dwindling population forced to cower behind half-forgotten symbols of power. Legends tell of a Deliverer: a general who once bound all mankind into a single force that defeated the demons. But is the return of the Deliverer just another myth? Perhaps not. Out of the desert rides Ahmann Jardir, who has forged the desert tribes into a demon-killing army. He has proclaimed himself Shar’Dama Ka, the Deliverer, and he carries ancient weapons—a spear and a crown—that give credence to his claim. But the Northerners claim their own Deliverer: the Warded Man, a dark, forbidding figure. Once, the Shar’Dama Ka and the Warded Man were friends. Now they are fierce adversaries. Yet as old allegiances are tested and fresh alliances forged, all are unaware of the appearance of a new breed of demon, more intelligent—and deadly—than any that have come before.

Now with twenty pages of bonus material, including an exclusive interview with Peter V. Brett

An excerpt from The Desert Spear: Book Two of The Demon Cycle

Fort Rizon's wall was a joke.

Barely ten feet high and only one thick, the entire city's defenses were less than the meanest of a Damaji's dozen palaces. The Watchers didn't even need their steel-shod ladders; most simply leapt to catch the lip of the tiny wall and pulled themselves up and over.

"People so weak and negligent deserve to be conquered," Hasik said. Jardir grunted but said nothing.

The advance guard of Jardir's elite warriors had come under cover of darkness, thousands of sandaled feet crunching the fallow, snow- covered fields surrounding the city proper. As the greenlanders cowered behind their wards, the Krasians had braved the demon- infested night to advance. Even corelings gave berth to so many Holy Warriors on the move.

They gathered before the city, but the veiled warriors did not attack immediately. Men did not attack other men in the night. When dawn's light began to fill the sky, they lowered their veils, that their enemies might see their faces.

There were a few brief grunts as the Watchers subdued the guards in the gatehouse, and then a creak as the city gates opened wide to admit Jardir's host. With a roar, six thousand dal'Sharum warriors poured into the city.

Before the Rizonans even knew what was happening, the Krasians were upon them, kicking in doors and dragging the men out of their beds, hurling them naked into the snow.

With its seemingly endless arable land, Fort Rizon was more populous by far than Krasia, but Rizonan men were not warriors, and they fell before Jardir's trained ranks like grass before the scythe. Those who struggled suffered torn muscle and broken bone. Those who fought, died.

Jardir looked at all of these in sorrow. Every man crippled or killed was one who could not find glory in Sharak Ka, the Great War, but it was a necessary evil. He could not forge the men of the North into a weapon against demonkind without first tempering them as the smith's hammer did the speartip.

Women screamed as Jardir's men tempered them in another fashion. Another necessary evil. Sharak Ka was nigh, and the coming generation of warriors had to spring from the seeds of men, not cowards.

After some time, Jardir's son Jayan dropped to one knee in the snow before him, his speartip red with blood. "The inner city is ours, Father," Jayan said.

Jayan had done well on his first command. Had this been a battle against demons, Jardir would have led the charge himself, but he would not stain the Spear of Kaji with human blood. Jayan was young to wear the white veil of captain, but he was Jardir's firstborn, Blood of the Deliverer himself. He was strong, impervious to pain, and warrior and cleric alike stepped with reverence around him.

"Many have fled," Asome added, appearing at his brother's back. "They will warn the hamlets, who will flee also, escaping the cleansing of Evejan law."

Jardir looked at him. Asome was a year younger than his brother, smaller and more slender. He was clad in a dama's white robes without armor or weapon, but Jardir was not fooled. His second son was easily the more ambitious and dangerous of the two, and they more so than any of their dozens of younger brothers.

"They escape for now," Jardir said, "but they leave their food stores behind and flee into the soft ice that covers the green lands in winter. The weak will die, sparing us the trouble of killing them, and my yoke will find the strong in due time. You have done well, my sons. Jayan, assign men to find buildings suitable to hold the captives before they die from cold. Separate the boys for Hannu Pash. If we can beat the Northern weakness out of them, perhaps some can rise above their fathers. The strong men we will use as fodder in battle, and the weak will be slaves. Any women of fertile age may be bred."

Jayan struck a fist to his chest and nodded.

"Asome, signal the other dama to begin," Jardir said, and Asome bowed.

Jardir watched his white-clad son as he strode off to obey. The clerics would spread the word of Everam to the chin, and those who did not accept it into their hearts would have it thrust down their throats.

That afternoon, Jardir paced the thick-carpeted floors of the manse he had taken as his Rizonan palace. It was a pitiful place compared with his palaces in Krasia, but after months of sleeping in tents since leaving the Desert Spear, it was a welcome touch of civilization.

In his right hand, Jardir clutched the Spear of Kaji, using it as one might a walking stick. He needed no support, of course, but the ancient weapon had brought about his rise to power, and it was never far from his grasp. The butt thumped against the carpet with each step.

"Abban is late," Jardir said. "Even traveling with the women after dawn, he should have been here by now."

"I will never understand why you tolerate that khaffit in your presence, Father," Asome said. "The pig-eater should be put to death for even having raised his eyes to look upon you, and yet you take his counsel as if he were an equal in your court."

"Kaji himself bent khaffit to the tasks that suited them," Jardir said. "Abban knows more about the green lands than anyone, and that is knowledge a wise leader must use."

"What is there to know?" Jayan asked. "The greenlanders are all cowards and weaklings, no better than khaffit themselves. They are not even worthy to fight as slaves and fodder."

"Do not be so quick to claim you know all there is," Jardir said. "Only Everam knows all things. The Evejah tells us to know our enemies, and we know very little of the North. If I am to bring them into the Great War, I must do more than just kill them, more than just dominate. I must understand them. And if all the men of the green lands are no better than khaffit, who better than a khaffit to explain their hearts to me?"

Just then, there was a knock at the door, and Abban came limping into the room. As always, the fat merchant was dressed in rich, womanly silks and fur-a garish display that he seemed to wear intentionally for the offense it gave to the austere dama and dal'Sharum.

The guards mocked and shoved him as he passed, but they knew better than to deny Abban entry. Whatever their personal feelings, hindering Abban risked Jardir's wrath, something no man wanted.

The crippled khaffit leaned heavily on his cane as he approached Jardir's throne, sweat pearling on his reddened, doughy face despite the cold. Jardir looked at him in disgust. It was clear he brought important news, but Abban stood panting, attempting to catch his breath, instead of sharing it.

"What is it?" Jardir snapped when his patience grew thin.

"You must do something!" Abban gasped. "They are burning the granaries!"

"What?!" Jardir demanded, leaping to his feet and grabbing Abban's arm, squeezing so hard the khaffit cried out in pain. "Where?"

"The north ward of the city," Abban said. "You can see the smoke from your door."

Jardir rushed out onto the front steps, immediately spotting the rising column. He turned to Jayan. "Go," he said. "I want the fires out, and those responsible brought before me."

Jayan nodded and vanished into the streets, trained warriors flowing in behind him like birds in formation. Jardir turned back to Abban.

"You need that grain if you are to feed the people through the winter," Abban said. "Every seed. Every crumb. I warned you."

Asome shot forward, snatching Abban's wrist and twisting his arm hard behind him. Abban screamed. "You will not address the Shar'Dama Ka in such a tone!" Asome growled.

Abban fell to his knees the moment Asome released him, placing both hands on the steps and pressing his forehead between them. "Ten thousand pardons, Deliverer," he said.

"I heard your coward's counsel against advancing into the Northern cold," Jardir said as Abban whimpered on the ground. "But I will not delay Everam's work because of this?.?.?." he kicked at the snow on the steps, "sandstorm of ice. If we need food, we will take it from the chin in the surrounding land, who live in plenty."

"Of course, Shar'Dama Ka," Abban said into the floor.

"You took far too long to arrive, khaffit," Jardir said. "I need you to find your merchant contacts among the captives."

"If they are still alive," Abban said. "Hundreds lie dead in the streets."

Jardir shrugged. "Your fault for being so slow. Go, question your fellow traders and find me the leaders of these men."

"The dama will have me killed the moment I issue a command, even if it be in your name, great Shar'Dama Ka," Abban said.

It was true enough. Under Evejan law, any khaffit daring to command his betters was put to death on the spot, and there were many who envied Abban's place on Jardir's council and would be glad to see his end.

"I will send Asome with you," Jardir said. "Not even the most fanatical cleric will challenge you then."

Abban blanched as Asome came forward, but he nodded. "As the Shar'Dama Ka commands." 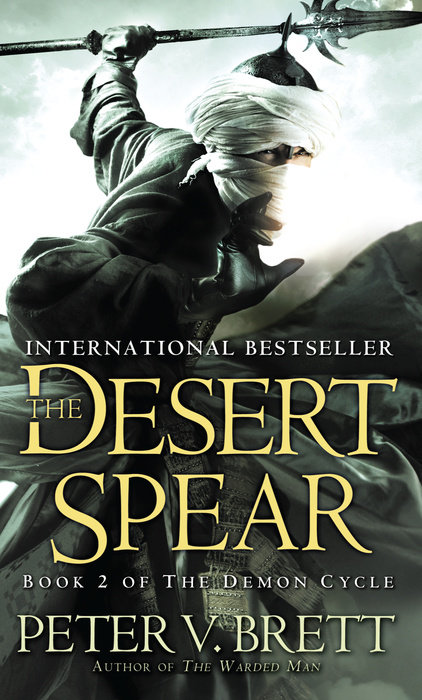