When the Viking lander on the planet Minerva was destroyed, sending back one last photo of a strange alien being, scientists on Earth were flabbergasted. And so a joint investigation was launched by the United States and the Soviet Union, the first long-distance manned space mission, and a symbol of the new peace between the two great rivals.

Humankind's first close encounter with extraterrestrials would be history in the making, and the two teams were schooled in diplomacy as well as in science. But nothing prepared them for alien war—especially when the Americans and the Soviets found themselves on opposite sides. . . .

Praise for A World of Difference

“[Harry] Turtledove has proved he can divert his readers to astonishing places. he's developed a cult following over the years. . . . I know I'd follow his imagination almost anywhere.”—San Jose Mercury News

“Turtledove never tires of exploring the paths not taken, bringing to his storytelling a prodigious knowledge of his subject and a profound understanding of human sensibilities and motivations.”—Library Journal

An excerpt from A World of Difference

Irv Levitt pumped away on the exercise bike. Sweat clung greasily to his skin and matted his dark brown hair. He tossed his head. That was a mistake he still made after eight months in space. Little drops spread in all directions.

The anthropologist swore and mopped them out of the air with a soft, absorbent cloth like a big diaper. Without mopping up, the sweat would float around until it hit something—or someone. Jamming six people into a ship as cramped as Athena was tough enough without troubles like that.

Levitt worked the bike with grim intensity until finally, mercifully, the timer rang and let him off the hook. Then he toweled himself off and pushed himself out of the tiny exercise chamber and past the three sleeping cubicles.

On his way by, he stuck his head through the privacy curtain of his own chamber for a moment. The light inside was dim and red; his wife Sarah was tethered to the foam mattress, asleep. He smiled a little and went on to the control room.

Patricia and Frank Marquard were already there, watching the monitor as Minerva flowed by below at almost 19,000 miles an hour. Levitt saw the longing on their faces. It mirrored his own: like him, they wanted nothing more than to get down to the planet so they could start working. She was a biologist, her husband a geologist.

At the moment, the monitor showed mostly ice. That was not surprising; each of Minerva’s polar caps reached about halfway to the equator, the northern a bit more, the southern a bit less. Sometimes the planet looked so frigid and forbidding that even a glance could make Levitt shiver.

Not now, though. The Athena moved north past the edge of the southern polar cap. Through cloud cover, Levitt glimpsed one of the long, deep gorges that channeled meltwater from the icecaps to the seas and lakes of the southern tropics every Minervan spring.

“I think I’d kill for a shower about now, even in water that cold,” he said.

Pat Marquard nodded rueful agreement. “Disinfectant wipes just aren’t the same,” she said. “I’m sick of smelling like an infirmary. I’m sick of short hair, too, and even sicker of having it smell like an infirmary.” Back on Earth, her hair had been a curly blond waterfall that went halfway down her back; she was vain about it. Keeping it only a couple of inches longer than Frank’s had given her something to complain about ever since Athena left the American space station.

“I could go for a shower, too, but I’m not looking forward to gravity again,” Frank said.

Levitt glared at him half seriously. “You have the nasty habit of pointing out things we’d all rather not think about. Just working the bike leaves my legs sore. Having to hold myself up again, walk, run—” He broke off, shaking his head in distaste.

“We may have to do some running,” Pat said quietly.

She let it drop there, but her eyes, her husband’s, and Irv’s automatically went to one of the two pictures taped above the monitor: the Viking photo. It shared pride of place with Galileo’s first sketch of Minerva through the telescope, but Galileo’s drawing got short shrift. Sometimes Irv stared at the Viking shot so hard that he ignored the planetary view under it. That picture was the reason for Athena, and the reason it had an anthropologist—it had him—aboard: the only glimpse humanity had ever had of another intelligent race.

Ever since Viking was destroyed, people had been searching for words to describe Minervans—or at least this Minervan, Levitt reminded himself; nobody had any idea how typical he, she, or it was. “Fat hatrack” was about the best short phrase anyone had come up with, and even the learned articles in Science and Nature had not done much better than that.

The creature was essentially cylindrical, better than six feet tall, and about a foot and a half across through most of its height. Half a dozen short, stumpy legs were equally spaced around its base. A like number of arms ringed its torso about a foot below the top; a ring of six eyes sprouted from the bulge there.

No mouth was visible. Some people wondered if the Minervan had one. If so, was it on the side away from the Viking’s camera, or in the center of the top part? Levitt would have bet on the latter; the Minervan looked to be radially symmetrical, not built on the bilateral pattern more common on Earth. He was willing to admit he was just guessing, though.

Each of the Minervan’s legs ended in three claws, each arm in three fingers. Two arms held the Artifact, as the anthropologists had dubbed it. Levitt had no idea what the thing was supposed to be for: it could have been a crook, a flail, a pole vaulter’s pole, anything. He doubted it was intended as a wrecking bar, but it had done the job plenty well.

“Junior doesn’t look as though it’d be very fast,” he said musingly.

“Neither are we, relative to the rest of the big mammals,” Pat said. “We have things besides speed going for us. So do the Minervans, I’ll guarantee you that.”

“That ‘relative’ is a good point, Pat,” Frank Marquard put in. “Without knowing what the local competition is, we can’t tell whether Junior’s a sloth or a gazelle.”

“You’ve been listening to your wife too much. Comes of sharing a cubicle with her, I suppose,” Irv said. He tried to remember when they had started calling the Minervan Junior and failed. Sometime very early on in the flight, anyway. “Me, I don’t care how fast Junior is by local standards. I just want to know whether I can outrun it if it decides to swing the Artifact at me.”

“Now who sounds like me?” Pat said, and poked him in the ribs. “That’s what I said a minute ago. You should spend more time with Sarah; then you and she would be echoing each other.”

“She’s asleep back there. Doing the last set of bloods and getting the data back to Houston took longer than she thought it would—that glitch showed up in the software again.” Sarah Levitt was an M.D. who specialized in biochemistry but was out of med school recently enough not to have forgotten what people were all about, either: a natural for Athena. For that matter, Irv knew that being married to her had not hurt his own chances.

“By now, everyone on this ship sounds like everybody else,” Frank said.

“In a pig’s ear we do.” Emmett Bragg glided through the cabin like a shark sliding through a tropical lagoon. If ever a man was made for free-fall, Irv thought for the hundredth time, Emmett Bragg was the one. The pilot was close to fifty, a decade older than anyone else aboard Athena, and the only real astronaut on the crew. Before NASA, he had flown Phantoms in Vietnam. Once he had stayed loose on the ground for three days until a chopper got him out after his plane went down south of Haiphong.

Frank laughed. “Nobody wants to imitate that mouthful of grits you talk through, Emmett. What do the Russians think of it, anyway?”

Still without a wasted motion, Bragg strapped himself into the commander’s seat. “Matter of fact, the accent interests ’em. One of ’em said to me once I sounded like I was from Georgia. I told him, naw, Alabama.”

“He meant Stalin country, Emmett, not where the Braves play,” Irv said.

“I know,” Bragg said calmly. “But it doesn’t hurt any to have the boys on the other side take you for a natural-born fool.” He checked the radar screen. A blip was showing: the Tsiolkovsky, coming up over the Minervan horizon.

Bragg nodded. “They haven’t been playing with their orbit again, anyhow.” He had worn a crew cut when it was stylish, kept it through the years when it wasn’t, and still had it now that it was in again. The only difference was that gray streaked it now. He picked up the radio mike. “Zdrast’ye, Tsiolkovsky,” he said, and went on in Russian that was accented but fluent. “All well aboard?”

“Very well, thank you, Brigadier Bragg.” Colonel Sergei Tolmasov sounded like an Oxford don. Just as the Americans used Russian to talk to the Soviet ship, the crew of the Tsiolkovsky always replied in English. Tolmasov’s dry wit went well with the slightly fussy precision he brought to the language. “Good to find you in your expected place, old fellow.”

“We were thinking the same thing about you,” Bragg said.

The Tsiolkovsky had changed orbits several times in the week since it and Athena had reached Minerva. Had each burn not taken place on the far side of the planet from Athena, Levitt would have been happier about believing the Russians when they said the maneuvers were just to enhance their observations. As things were, he had not been sorry when Bragg also started jinking. “Let them worry, too,” the pilot had said.

Now Tolmasov remarked, “I will be glad when we are all on the ground, and this foolish maneuvering can cease.”

“Agreed,” Bragg said at once. “We’ll be too busy cheating the natives to worry so much about each other.”

“Ah—quite,” Tolmasov replied after a moment’s pause. “There are times, Brigadier, when I must confess myself uncertain as to how facetious you are being. Tsiolkovsky out.”

Bragg chuckled. “Sometimes I wonder myself, Sergei Konstantinovich. Athena out.” When the mike was dead, he fell back into English. “The other thing I wonder about is whether all this back-and-forth with the Russians will end up making a full-time liar out of me.” 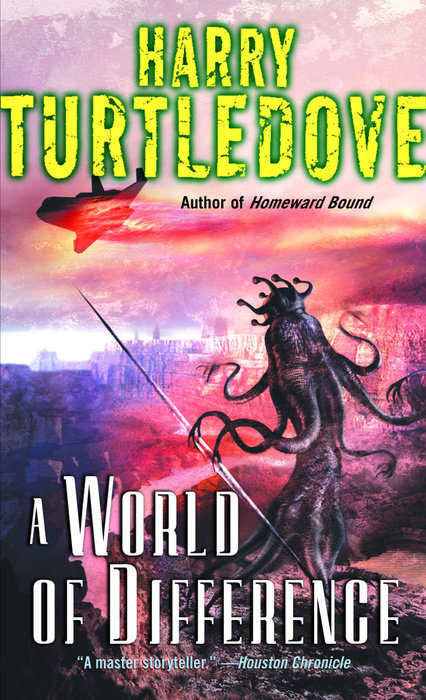