A stroke of the pen and history is changed. In 1938, British prime minister Neville Chamberlain, determined to avoid war, signed the Munich Accord, ceding part of Czechoslovakia to Hitler. But the following spring, Hitler snatched the rest of that country, and England, after a fatal act of appeasement, was fighting a war for which it was not prepared. Now, in this thrilling alternate history, another scenario is played out: What if Chamberlain had not signed the accord?

In this action-packed chronicle of the war that might have been, Harry Turtledove uses dozens of points of view to tell the story: from American marines serving in Japanese-occupied China and ragtag volunteers fighting in the Abraham Lincoln Battalion in Spain to an American woman desperately trying to escape Nazi-occupied territory—and witnessing the war from within the belly of the beast. A tale of powerful leaders and ordinary people, at once brilliantly imaginative and hugely entertaining, Hitler’s War captures the beginning of a very different World War II—with a very different fate for our world today.

An excerpt from Hitler's War (The War That Came Early, Book One)

General José Sanjurjo was a short, heavyset man in his early sixties. He looked from the light plane to the pilot and back again. “Is everything in readiness?” he asked, his tone saying heads would roll if the pilot told him no.

Major Juan Antonio Ansaldo didn’t tell him anything, not right away. Ansaldo was pacing back and forth, his agitation growing with every stride. He watched as Sanjurjo’s aides shoved two large, heavy trunks into the airplane. “Those look heavy,” Ansaldo said at last.

“They hold the general’s uniforms!” an aide said, as if to a simpleton. “On the eve of his victorious march into Madrid, he can’t arrive in Burgos without uniforms!”

Nervously, Ansaldo lit a cigarette. Who was he, a major, to tell Spain’s most senior—and most prestigious—general what to do? He’d placed himself at the disposal of the Spanish state . . . which Sanjurjo would embody, once he flew from Portugal to Burgos to take charge of the rising against the Spanish Republic.

“What is it?” growled the man people called the Lion of the Rif because of his victories in Spanish Morocco.

Sanjurjo preened . . . as well as a short, heavyset man in his sixties could preen. “Now I know my flag is waving over Spain,” he boomed like a courting grouse. “When I hear the Royal March again, I will be ready to die!”

That gave Major Ansaldo the opening he needed. “General, I don’t want you to die before you get to Spain, before you hear the Royal March again.”

“What are you talking about?” Sanjurjo demanded.

“Sir, those trunks your men put aboard—”

“What about them? They’re my uniforms, as my aides told you. A man is hardly a man without his uniforms.” At the moment, Sanjurjo was wearing a light gray summer-weight civilian suit. He looked and acted quite manly enough for Ansaldo.

“They weigh a lot.” The pilot gestured. “Look at the pine trees all around the airstrip. I need the plane’s full power to take off. I have to make sure I have enough fuel to fly you to Burgos. I don’t want anything to happen to you, Señor. Spain needs you too much to take chances.”

General Sanjurjo frowned—not fearsomely, but thoughtfully. “I can’t fly into Burgos like this.” He brushed at the gray linen of his sleeve.

“Why not, your Excellency? Why not?” Ansaldo asked. “Don’t you think the people of Burgos would be delighted—would be honored—to give you anything you need? Aren’t there any uniforms in Burgos? God help the rising if that’s true!”

“God help the rising.” Sanjurjo crossed himself. Major Ansaldo followed suit. The general took a gold case from an inside jacket pocket and lit a cigarette of his own. He smoked in abrupt, savage drags. “So you think we’ll crash with my uniforms on board, do you?”

“When you’re flying, you never know,” the pilot answered. “That’s why you don’t want to take any chances you don’t have to.”

Sanjurjo grunted. He took a couple of more puffs on the aromatic Turkish cigarette, then ground it out under his heel. “Luis! Orlando!” he called. “Get the trunks off the plane!”

His aides stared as if they couldn’t believe their ears. “Are you sure, your Excellency?” one of them asked.

“Of course I’m sure, dammit.” By the way José Sanjurjo spoke, he was always sure. And so he probably was. “Spain comes first, and Spain needs me more than I need my uniforms. As the pilot here says, there are many uniforms. Por Dios, amigos, there is only one Sanjurjo!” The general struck a pose.

The aides didn’t argue any more. They did what Sanjurjo told them to do. Wrestling the trunks out of the plane’s narrow fuselage proved harder than stuffing them in had been. It took a lot of bad language and help from three other men before they managed it.

Major Ansaldo wondered how many kilos he’d saved. Fifty? A hundred? He didn’t know, and he never would—no scale was close by. But now he would fly with the kind of load the light plane was made to carry. He liked that.

“If your Excellency will take the right-hand seat . . .” he said.

“Certainly.” Sanjurjo was as spry as a man of half his age and half his bulk.

After Ansaldo started the motor, he ran through the usual flight checks. Everything looked good. He gave the plane all the throttle he could. He needed to get up quickly, to clear the trees beyond the far edge of the bumpy field.

When he pulled back on the stick, the nose lifted. The fixed undercarriage left the ground. The bumping stopped. The air, for the moment, was smooth as fine brandy. A slow smile spread across General Sanjurjo’s face. “Do you know what this is, Major?” he said. “A miracle, that’s what! To fly like a bird, like an angel . . .”

“It’s only an airplane, sir,” said Ansaldo, as matter-of-fact as any pilot worth his pay.

“Sí, Señor.” Major Ansaldo knew how the general felt there. If a Spaniard and a Portuguese spoke slowly and clearly, or if they wrote things out, they could generally manage to understand each other. But Portuguese always sounded funny—sounded wrong—in a Spaniard’s ears. The reverse was also bound to be true, but the pilot never once thought of that.

And his important passenger hadn’t finished: “It is an airplane that takes me back to Spain, back to my country—and Spain will be my country once we settle with the Republican rabble. It is—what does Matthew say?—a pearl of great price.” He crossed himself again.

So did Juan Antonio Ansaldo. “You have the soul of a poet, your Excellency,” he said. General Sanjurjo smiled like a cat in front of a pitcher of cream. Ansaldo did, too, but only to himself; a little judicious flattery, especially flattery from an unexpected direction, never hurt. But he also had a serious point to make: “I’m glad you chose not to endanger the plane—and yourself, a more valuable pearl—with those trunks. Spain needs you.”

“Well, yes,” Sanjurjo agreed complacently. “Who would command the forces of the right, the forces of truth, against the atheists and Communists and liberals in the Republic if anything happened to me? Millán Astray?”

“I don’t think so, sir!” Ansaldo exclaimed, and that wasn’t flattery. Astray, the founder of the Spanish Foreign Legion, was a very brave man. Colonial fighting had cost him an arm and an eye. He still led the Legion, whose war cry was “¡Viva la muerte!”—Long live death! Men like that were valuable in the officer corps, but who would want such a skeletal fanatic leading a country?

“Bueno. I don’t think so, either.” Yes, Sanjurjo sounded complacent, all right. And why not, when he held the rising in the palm of his hand? He couldn’t resist throwing out the name of another possible replacement: “Or what about General Franco?”

“Not likely, your Excellency!” Again, Major Ansaldo meant what he said. No one had ever questioned Francisco Franco’s courage, either, even if he wasn’t so showy about displaying it as Millán Astray was. But the plump little general was no great leader of men. With Sanjurjo’s personality, he could stand beside—could, at need, stand up to— Mussolini and Hitler. Franco? Franco had all the warmth, all the excitement, of a canceled postage stamp.

“No, not likely at all,” General Sanjurjo said. “Once I get to Burgos, the true business of setting Spain to rights can begin.”

“Sí, Señor,” Ansaldo said once more. The light plane droned on: toward Spain, toward Burgos, toward victory, toward the birth of a whole new world. 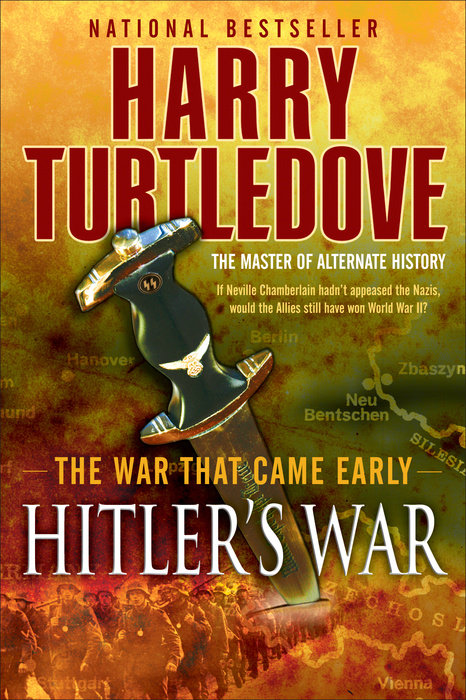