Krispos had held the throne of Videssos since he was scarcely more than a peasant youth. But now a strange heresy has taken root in the land, a hidden dissent that is flaring into open revolt. As Krispos leads his legions with his three sons, against the rebels, one son disappears into the rebel ranks. Then the renegades seize the day, and Krispos wages an ever more desperate war against an implacable foe that would not scruple to set brother against brother, father against son....

An excerpt from Krispos the Emperor (The Tale of Krispos, Book Three)

KRISPOS SOPPED A HEEL OF BREAD IN THE FERMENTED FISH SAUCE that had gone over his mutton. He ate the bread in two bites, washed it down with a final swallow of sweet, golden Vaspurakaner wine, set the silver goblet back on the table.

Before he could even let out a contented sigh, Barsymes came into the little dining chamber to clear away his dishes. Krispos cocked an eyebrow at the eunuch chamberlain. “How do you time that so perfectly, esteemed sir?” he asked. “It’s not sorcery, I know, but it always strikes me as magical.”

The vestiarios hardly paused as he answered, “Your Majesty, attention to your needs is the proper business of every palace servitor.” His voice was a tone for which Videssian had no name, halfway between tenor and contralto. His long, pale fingers deftly scooped up plates and goblet, knife and fork and spoon, set them on a vermeil tray.

As Barsymes worked, Krispos studied his face. Like any eunuch gelded before puberty, the vestiarios had no beard. That was part of what made him look younger than he was, but not all. His skin was very fine, and had hardly wrinkled or sagged through the many years Krispos had known him. Being a eunuch, he still had a boy’s hairline, and his hair was still black (though that, at least, might have come from a bottle).

Suddenly curious, Krispos said, “How old are you, Barsymes? Do you mind my asking? When I became Avtokrator of the Videssians, I would have sworn on Phos’ holy name that you had more years than I. Now, though, I’d take oath the other way round.”

“I would not have your Majesty forsworn either way,” Barsymes answered seriously. “As a matter of fact, I do not know my exact age. If I were forced to guess, I would say we were not far apart. And, if your Majesty would be so gracious as to forgive me, memories are apt to shift with time, and you have sat on the imperial throne for—is it twenty-two years now? Yes, of course; the twenty-year jubilee was summer before last.”

“Twenty-two years,” Krispos murmured. Sometimes the day when he walked down to Videssos the city to seek his fortune after being taxed off his farm seemed like last week. He’d had more muscle than brains back then—what young man doesn’t? The only trait he was sure he kept from his peasant days was a hard stubbornness.

Sometimes, like tonight, that trek down from his village seemed so distant, it might have happened to someone else. He was past fifty now, though like Barsymes he wasn’t sure just how old he was. The imperial robes concealed a comfortable potbelly. His hair had gone no worse than iron gray, but white frosted his beard, his mustache, even his eyebrows. Perverse vanity kept him from the dye pot—he knew he was no boy any more, so why pretend to anyone else?
“Will your Majesty forgive what might perhaps be perceived as an indiscretion?” Barsymes asked.

“Esteemed sir, these days I’d welcome an indiscretion,” Krispos declared. “One of the things I do miss about my early days is having people come right out and tell me what they think instead of what they think will please me or what’s to their own advantage. Go on; say what you will.”

“Nothing of any great moment,” the vestiarios said. “It merely crossed my mind that you might find it lonely, eating by yourself at so many meals.”

“Banquets can be dull, too,” Krispos said. But that wasn’t what Barsymes meant, and he knew it. Here in the residence where the Avtokrator and his family had more privacy than anywhere else (not much, by anyone else’s standard—Barsymes, for instance, was in the habit of dressing Krispos every morning), meals should have been a time when everyone could just sit around and talk. Krispos remembered many such meals—happy even if sometimes short on food—in the peasant huts where he’d grown to manhood.

Maybe if Dara were still alive … His marriage to his predecessor’s widow began as an alliance of convenience for both of them, but despite some quarrels and rocky times it had grown into more than that. And Dara had always got on well with their sons, too. But Dara had gone to Phos’ light, or so Krispos sincerely hoped, almost ten years before. Since then …

“Evripos and Katakolon, I suppose, are out prowling for women,” Krispos said. “That’s what they usually do of nights, anyhow, being the ages they are.”

“Yes,” Barsymes said tonelessly. He had never prowled for women, nor would he. Sometimes he took a sort of melancholy pride in being above desire. Krispos often thought he must have wondered what he was missing, but he’d never have the nerve to ask. Only those far from the palace quarter imagined the Avtokrator as serene and undisputed master of his household.

Krispos sighed. “As for Phostis, well, I just don’t know what Phostis is up to right now.”

He sighed again. Phostis, his eldest, his heir—his cuckoo’s egg? He’d never known for sure whether Dara had conceived by him or by Anthimos, whom he’d overthrown. The boy’s—no, young man’s now—looks were no help, for he looked like Dara. Krispos’ doubts had always made it hard for him to warm up to the child he’d named for his own father.

And now … Now he wondered if he’d been so nearly intolerable as he was growing into manhood. He didn’t think so, but who does, looking back on his own youth? Of course, his own younger years were full of poverty and hunger and fear and backbreaking work. He’d spared Phostis all that, but he wondered if his son was the better for it.

He probably was. There were those in Videssos the city who praised the hard, simple life the Empire’s peasants led, who even put into verse the virtues that life imbued into those peasants. Krispos thought they were full of the manure they’d surely never touched with their own daintily manicured fingers.

Barsymes said, “The young Majesty will yet make you proud.” Fondness touched his usually cool voice. Since he could have no children of his own, he doted on the ones he’d helped raise from infancy.

“I hope you’re right,” Krispos said. He worried still. Was Phostis as he was because of Anthimos’ blood coming through? The man Krispos had supplanted in Dara’s bed and then in the palaces had had a sort of hectic brilliance to him, but applied it chiefly in pursuit of pleasure. Whenever Phostis did something extravagantly foolish, Krispos worried about his paternity.

Was Phostis really spoiled from growing up soft? Or, asked the cold, suspicious part of Krispos that never quite slept and that had helped keep him on the throne for more than two decades, was he just getting tired of watching his father rule vigorously? Did he want to take the Empire of Videssos into his own young hands?

Krispos looked up at Barsymes. “If a man can’t rely on his own son, esteemed sir, upon whom can he rely? Present company excepted, of course.”

“Your Majesty is gracious.” The vestiarios dipped his head. “As I said, however, I remain confident Phostis will satisfy your every expectation of him.”

“Maybe,” was all Krispos said.

Accepting his gloom, Barsymes picked up the tray and began to take it back to the kitchens. He paused at the doorway. “Will your Majesty require anything more of me?”

“No, not for now. Just make sure the candles in the study are lit, if you’d be so kind. I have the usual pile of parchments there waiting for review, and I can’t do them all by daylight.”

“I shall see to it,” Barsymes promised. “Er—anything besides that?”

“No, eminent sir, nothing else, thank you,” Krispos said. He’d had a few women in the palaces since Dara died, but his most recent mistress had seemed convinced he would make her relatives rich and powerful regardless of their merits, which were slender. He’d sent her packing.

Now—now his desire burned cooler than it had in his younger days. Little by little, he thought, he was beginning to approach Barsymes’ status. He had never said that out loud and never would, for fear both of wounding the chamberlain’s feelings and of encountering his pungent sarcasm.

Krispos waited a couple of minutes, then walked down the hall to the study. The cheerful glow of candlelight greeted him from the doorway: As usual, Barsymes gave flawless service. The stack of documents on the desk was less gladsome. Sometimes Krispos likened that stack to an enemy city that had to be besieged and then taken. But a city had to be captured only once. The parchments were never vanquished for good.

He’d watched Anthimos ignore administration for the sake of pleasure. Perhaps in reaction, he ignored pleasure for administration. When the pile of parchments was very high, as tonight, he wondered if Anthimos hadn’t known the better way after all. Without a doubt, Anthimos had enjoyed himself more than Krispos did now. But equally without a doubt, the Empire was better served now than it had been during Anthimos’ antic reign.

Reed pens and the scarlet ink reserved for the Avtokrator of the Videssians alone, stylus and wax-covered wooden tablets, and sky-blue sealing wax waited in a neat row at the left edge of the desk, like regiments ready to be committed to battle against the implacable enemy. Feeling a moment’s foolishness, Krispos saluted them, clenched right fist over his heart. Then he sat down and got to work.

Topping the pile was a tax report from the frontier province of Kubrat, between the Paristrian Mountains and the Istros River, north and east of Videssos the city. When Krispos’ reign began, it had been the independent khaganate of Kubrat, a barbarous nation whose horsemen had raided the Empire for centuries. Now herds and farms and mines brought gold rather than terror south of the mountains. Solid progress there, he thought. He scrawled his signature to show he’d read the cadaster and approved its revenue total. 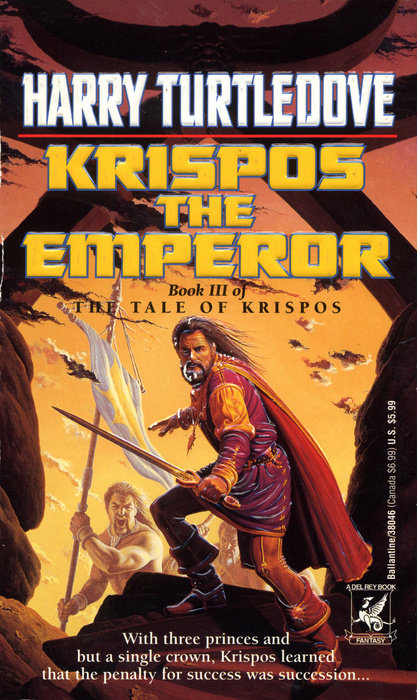