The hero of John Updike’s Rabbit, Run, ten years after the events of Rabbit Redux, has come to enjoy considerable prosperity as the chief sales representative of Springer Motors, a Toyota agency in Brewer, Pennsylvania. The time is 1979: Skylab is falling, gas lines are lengthening, and double-digit inflation coincides with a deflation of national self-confidence. Nevertheless, Harry “Rabbit” Angstrom feels in good shape, ready to enjoy life at last—until his wayward son, Nelson, returns from the West, and the image of an old love pays a visit to the lot. New characters and old populate these scenes from Rabbit’s middle age as he continues to pursue, in his zigzagging fashion, the rainbow of happiness.

An excerpt from Rabbit Is Rich

Running out of gas, Rabbit Angstrom thinks as he stands behind the summer-dusty windows of the Springer Motors display room watching the traffic go by on Route 111, traffic somehow thin and scared compared to what it used to be. The fucking world is running out of gas. But they won’t catch him, not yet, because there isn’t a piece of junk on the road gets better mileage than his Toyotas, with lower service costs. Read Consumer Reports, April issue. That’s all he has to tell the people when they come in. And come in they do, the people out there are getting frantic, they know the great American ride is ending. Gas lines at ninety-nine point nine cents a gallon and ninety per cent of the stations to be closed for the weekend. The governor of the Commonwealth of Pennsylvania calling for five-dollar minimum sales to stop the panicky topping-up. And truckers who can’t get diesel shooting at their own trucks, there was an incident right in Diamond County, along the Pottsville Pike. People are going wild, their dollars are going rotten, they shell out like there’s no tomorrow. He tells them, when they buy a Toyota, they’re turning their dollars into yen. And they believe him. A hundred twelve units new and used moved in the first five months of 1979, with eight Corollas, five Coronas including a Luxury Edition Wagon, and that Celica that Charlie said looked like a Pimpmobile unloaded in these first three weeks of June already, at an average gross mark-up of eight hundred dollars per sale. Rabbit is rich.

He owns Springer Motors, one of the two Toyota agencies in the Brewer area. Or rather he co-owns a half-interest with his wife Janice, her mother Bessie sitting on the other half inherited when old man Springer died five years back. But Rabbit feels as though he owns it all, showing up at the showroom day after day, riding herd on the paperwork and the payroll, swinging in his clean suit in and out of Service and Parts where the men work filmed with oil and look up white-eyed from the bulb-lit engines as in a kind of underworld while he makes contact with the public, the community, the star and spearpoint of all these two dozen employees and hundred thousand square feet of working space, which seem a wide shadow behind him as he stands there up front. The wall of imitation boards, really sheets of random-grooved Masonite, around the door into his office is hung with framed old clippings and team portraits, including two all-county tens, from his days as a basketball hero twenty years ago—no, more than twenty-five years now. Even under glass, the clippings keep yellowing, something in the chemistry of the paper apart from the air, something like the deepening taint of sin people used to try to scare you with. ANGSTROM HITS FOR 42. “Rabbit” Leads Mt. Judge Into Semi-Finals. Resurrected from the attic where his dead parents had long kept them, in scrapbooks whose mucilage had dried so they came loose like snakeskins, these clippings thus displayed were Fred Springer’s idea, along with that phrase about an agency’s reputation being the shadow of the man up front. Knowing he was dying long before he did, Fred was getting Harry ready to be the man up front. When you think of the dead, you got to be grateful.

Ten years ago when Rabbit got laid off as a Linotyper and reconciled with Janice, her father took him on as salesman and when the time was ripe five years later had the kindness to die. Who would have thought such a little tense busy bird of a man could get it up for a massive coronary? Hypertense: his diastolic had been up around one-twenty for years. Loved salt. Loved to talk Republican, too, and when Nixon left him nothing to say he had kind of burst. Actually, he had lasted a year into Ford, but the skin of his face was getting tighter and the red spots where the cheek and jaw bones pressed from underneath redder. When Harry looked down at him rouged in the coffin he saw it had been coming, dead Fred hadn’t much changed. From the way Janice and her mother carried on you would have thought a mixture of Prince Valiant and Moses had bit the dust. Maybe having already buried both his own parents made Harry hard. He looked down, noticed that Fred’s hair had been parted wrong, and felt nothing. The great thing about the dead, they make space.

While old man Springer was still prancing around, life at the lot was hard. He kept long hours, held the showroom open on winter nights when there wasn’t a snowplow moving along Route 111, was always grinding away in that little high-pitched grinder of a voice about performance guidelines and washout profits and customer servicing and whether or not a mechanic had left a thumbprint on some heap’s steering wheel or a cigarette butt in the ashtray. When he was around the lot it was like they were all trying to fill some big skin that Springer spent all his time and energy imagining, the ideal Springer Motors. When he died that skin became Harry’s own, to stand around in loosely. Now that he is king of the lot he likes it here, the acre of asphalt, the new-car smell present even in the pamphlets and pep talks Toyota mails from California, the shampooed carpet wall to wall, the yellowing basketball feats up on the walls along with the plaques saying Kiwanis and Rotary and C of C and the trophies on a high shelf won by the Little League teams the company sponsors, the ample square peace of this masculine place spiced by the girls in billing and reception that come and go under old Mildred Kroust, and the little cards printed with HAROLD C. ANGSTROM on them and CHIEF SALES REPRESENTATIVE. The man up front. A center of sorts, where he had been a forward. There is an airiness to it for Harry, standing there in his own skin, casting a shadow. The cars sell themselves, is his philosophy. The Toyota commercials on television are out there all the time, preying on people’s minds. He likes being part of all that; he likes the nod he gets from the community, that had overlooked him like dirt ever since high school. The other men in Rotary and Chamber turn out to be the guys he played ball with back then, or their ugly younger brothers. He likes having money to float in, a big bland good guy is how he sees himself, six three and around two fifteen by now, with a forty-two waist the suit salesman at Kroll’s tried to tell him until he sucked his gut in and the man’s thumb grudgingly inched the tape tighter. He avoids mirrors, when he used to love them. The face far in his past, crew-cut and thin-jawed with sleepy predatory teen-age eyes in the glossy team portraits, exists in his present face like the chrome bones of a grille within the full front view of a car and its fenders. His nose is still small and straight, his eyes maybe less sleepy. An ample blown-dry-looking businessman’s haircut masks his eartips and fills in where his temples are receding. He didn’t much like the counterculture with all its drugs and draft-dodging but he does like being allowed within limits to let your hair grow longer than those old Marine cuts and to have it naturally fluff out. In the shaving mirror a chaos of wattles and slack cords blooms beneath his chin in a way that doesn’t bear study. Still, life is sweet. That’s what old people used to say and when he was young he wondered how they could mean it.

Last night it hailed in Brewer and its suburbs. Stones the size of marbles leaped up from the slant little front yards and drummed on the tin signs supporting flickering neon downtown; then came a downpour whose puddles reflected a dawn gray as stone. But the day has turned breezy and golden and the patched and white-striped asphalt of the lot is dry, late in the afternoon of this longest Saturday in June and the first of calendar summer. Usually on a Saturday Route 111 is buzzing with shoppers pillaging the malls hacked from the former fields of corn, rye, tomatoes, cabbages, and strawberries. Across the highway, the four concrete lanes and the median divider of aluminum battered by many forgotten accidents, stands a low building faced in dark clinker brick that in the years since Harry watched its shell being slapped together of plywood has been a succession of unsuccessful restaurants and now serves as the Chuck Wagon, specializing in barbecued take-outs. The Chuck Wagon too seems quiet today. Beyond its lot littered with flattened take-out cartons a lone tree, a dusty maple, drinks from a stream that has become a mere ditch. Beneath its branches a picnic table rots unused, too close to the overflowing dumpster the restaurant keeps by its kitchen door. The ditch marks the bound of a piece of farmland sold off but still awaiting its development. This shapely old maple from its distance seems always to be making to Harry an appeal he must ignore.

JOHN UPDIKE is the author of more than sixty books, eight of them collections of poetry. His novels won the Pulitzer Prize, the National Book Award, the National Book Critics Circle, and the William Dean Howells Medal of the American Academy of Arts and Letters. He died in January 2009. 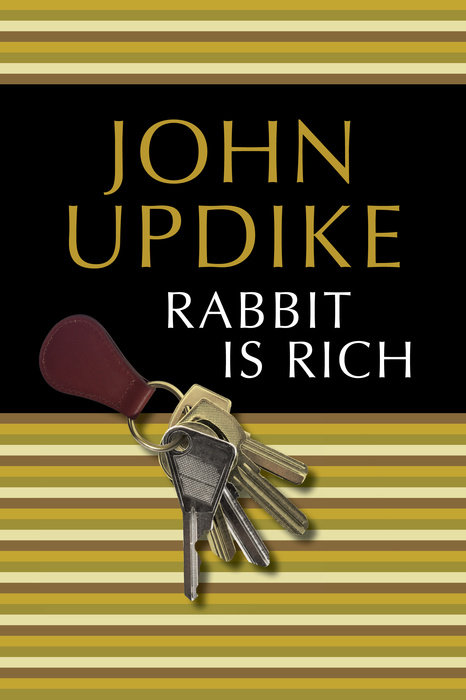