NEW YORK TIMES BESTSELLER • “For all those who have lived with Vonnegut in their imaginations . . . this is what he is like in person.”–USA Today

In a volume that is penetrating, introspective, incisive, and laugh-out-loud funny, one of the great men of letters of this age–or any age–holds forth on life, art, sex, politics, and the state of America’s soul. From his coming of age in America, to his formative war experiences, to his life as an artist, this is Vonnegut doing what he does best: Being himself. Whimsically illustrated by the author, A Man Without a Country is intimate, tender, and brimming with the scope of Kurt Vonnegut’s passions.

Praise for A Man Without a Country

“[This] may be as close as Vonnegut ever comes to a memoir.”–Los Angeles Times

“Like [that of] his literary ancestor Mark Twain, [Kurt Vonnegut’s] crankiness is good-humored and sharp-witted. . . . [Reading A Man Without a Country is] like sitting down on the couch for a long chat with an old friend.”–The New York Times Book Review

“Fans will linger on every word . . . as once again [Vonnegut] captures the complexity of the human condition with stunning calligraphic simplicity.”–The Australian

“Thank God, Kurt Vonnegut has broken his promise that he will never write another book. In this wondrous assemblage of mini-memoirs, we discover his family’s legacy and his obstinate, unfashionable humanism.”–Studs Terkel

An excerpt from A Man Without a Country

As a kid I was the youngest member of my family, and the youngest child in any family is always a jokemaker, because a joke is the only way he can enter into an adult conversation. My sister was five years older than I was, my brother was nine years older than I was, and my parents were both talkers. So at the dinner table when I was very young, I was boring to all those other people. They did not want to hear about the dumb childish news of my days. They wanted to talk about really important stuff that happened in high school or maybe in college or at work. So the only way I could get into a conversation was to say something funny. I think I must have done it accidentally at first, just accidentally made a pun that stopped the conversation, something of that sort. And then I found out that a joke was a way to break into an adult conversation.

I grew up at a time when comedy in this country was superb—it was the Great Depression. There were large numbers of absolutely top comedians on radio. And without intending to, I really studied them. I would listen to comedy at least an hour a night all through my youth, and I got very interested in what jokes were and how they worked.

When I’m being funny, I try not to offend. I don’t think much of what I’ve done has been in really ghastly taste. I don’t think I have embarrassed many people, or distressed them. The only shocks I use are an occasional obscene word. Some things aren’t funny. I can’t imagine a humorous book or skit about Auschwitz, for instance. And it’s not possible for me to make a joke about the death of John F. Kennedy or Martin Luther King. Otherwise I can’t think of any subject that I would steer away from, that I could do nothing with. Total catastrophes are terribly amusing, as Voltaire demonstrated. You know, the Lisbon earthquake is funny.

I saw the destruction of Dresden. I saw the city before and then came out of an air-raid shelter and saw it afterward, and certainly one response was laughter. God knows, that’s the soul seeking some relief.

Any subject is subject to laughter, and I suppose there was laughter of a very ghastly kind by victims in Auschwitz.

Humor is an almost physiological response to fear. Freud said that humor is a response to frustration—one of several. A dog, he said, when he can’t get out a gate, will scratch and start digging and making meaningless gestures, perhaps growling or whatever, to deal with frustration or surprise or fear.

And a great deal of laughter is induced by fear. I was working on a funny television series years ago. We were trying to put a show together that, as a basic principle, mentioned death in every episode and that this ingredient would make any laughter deeper without the audience’s realizing how we were inducing belly laughs.

There is a superficial sort of laughter. Bob Hope, for example, was not really a humorist. He was a comedian with very thin stuff, never mentioning anything troubling. I used to laugh my head off at Laurel and Hardy. There is terrible tragedy there somehow. These men are too sweet to survive in this world and are in terrible danger all the time. They could be so easily killed.


Even the simplest jokes are based on tiny twinges of fear, such as the question, “What is the white stuff in bird poop?” The auditor, as though called upon to recite in school, is momentarily afraid of saying something stupid. When the auditor hears the answer, which is, “That’s bird poop, too,” he or she dispels the automatic fear with laughter. He or she has not been tested after all.

“Why do firemen wear red suspenders?” And “Why did they bury George Washington on the side of a hill?” And on and on.

True enough, there are such things as laughless jokes, what Freud called gallows humor. There are real-life situations so hopeless that no relief is imaginable.

While we were being bombed in Dresden, sitting in a cellar with our arms over our heads in case the ceiling fell, one soldier said as though he were a duchess in a mansion on a cold and rainy night, “I wonder what the poor people are doing tonight.” Nobody laughed, but we were still all glad he said it. At least we were still alive! He proved it.

Kurt Vonnegut was a master of contemporary American literature. His black humor, satiric voice, and incomparable imagination first captured America’s attention in The Sirens of Titan in 1959 and established him, in the words of The New York Times, as “a true artist” with the publication of Cat’s Cradle in 1963. He was, as Graham Greene declared, “one of the best living American writers.” Mr. Vonnegut passed away in April 2007. 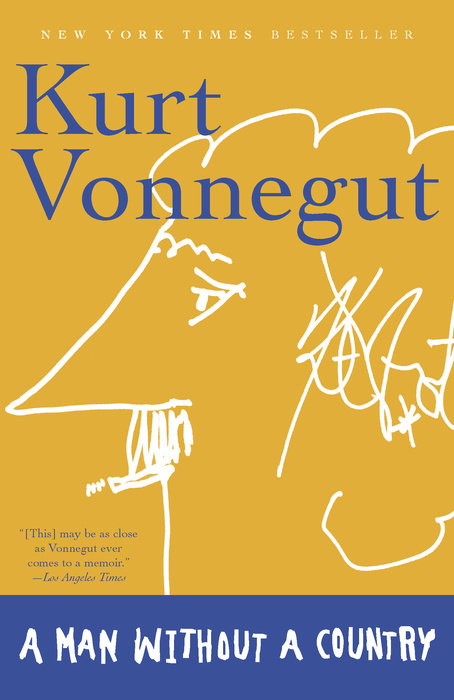