Or, Prometheus-5, a Space Fantasy

An experimental television play composed of excerpts from his novels and stories, Between Time and Timbuktu features Kurt Vonnegut’s special blend of scientific expertise, wit, and penetrating comment.

“Most unusual, ultra imaginative . . . a sort of cross between 2001: A Space Odyssey and Alice in Wonderland.”—Philadelphia Inquirer

The basic story line: Young Stony Stevenson wins a jingle contest and, as his prize, is blasted off into the time-space warp. The country’s first poet-astronaut thus experiences both past and future human history simultaneously. His observations on it consist mainly of dramatized selections from the author’s works. The result is a unique Vonnegut sampler cast in the form of “an excellent drama” (Pittsburgh Press).

An excerpt from Between Time and Timbuktu

This book is said to have been written by me. And I did write it, too, pretty much—over the past twenty-two years. But it would never have occurred to me to put my words in this particular order. That vision was received by some friendly people at National Educational Television in New York and at WGBH in Boston. With my permission, they took unrelated incidents from several of my stories, and they tacked them together to form a rough draft of a script for a ninety-minute TV show.

I was reminded of the bizarre surgical experiments performed in the H.G. Wells tale The Island of Dr. Moreau. Dr. Moreau cut up all sorts of animals—and he assembled grotesque new creatures from the parts.

I began to fool around with the script myself. I grafted the head of a box turtle onto the neck of a giraffe, so to speak—and so on. Amazingly, chillingly, hilariously, the impossible creature lived for a little while. It was clumsy, funny-looking, and almost pathetically eager to please.

It had a soul, too, which was mainly supplied by an extraordinarily gifted actor my own age, William Hickey. Bill played the part of the reluctant astronaut, Stony Stevenson. Since Stony was not a strongly motivated character, and since we weren’t sure what he was supposed to represent anyway, we asked Bill to be himself. He demonstrated that Bill as Bill, adrift in time and space, was an enchanting human being.

My father loved the music of Kurt Weill, and he said one time, admiringly, that the music sounded as though it were written by an inspired amateur. My father was a professional architect. I think he came to resent the neatness and tightness and slickness which his professionalism (and his clients) imposed on his designs. He could never be slapdash or childish or passionately crude. He could never do what inspired amateurs did, which, among other things, was to leave a lot to Lady Luck.

This script, it seems to me, is the work of professionals who yearned to be as charming as inspired amateurs can sometimes be. True, we hired the finest actors and technicians we could find. As for the meaning of the show, though, we left that to Lady Luck. She was good to us this time.

We shot first and asked questions afterwards, which is the American way. It was a picnic. It was a lark. I have never had more skilful, amusing associates.

While we were filming the show, usually on weekends, I told other writers, “Hey, get into non-commercial television.” I said this only to writers who were rich. “The pay is lousy,” I said, “but the freedom is total, as nearly as I can tell. They’ll get you almost any actor you want, they’ll break their necks to create any effect you want, and the writer has as much authority as Alexander the Great.”

I still feel that way.

As for myself, though, I am not going to have anything more to do with film—for this reason: I don’t like film.

I love National Educational Television. I love WGBH of Boston, which had so much to do with the making of this film. I love George Roy Hill and Universal Pictures, who made a flawless translation of my novel Slaughterhouse-Five to the silver screen. I drool and cackle every time I watch that film, because it is so harmonious with what I felt when I wrote the book.

Film is too clankingly real, too permanent, too industrial for me. As a stingy child of the Great Depression, I am bound to complain that it is also too f***ing expensive to be much fun. I get the heebie-jeebies every time I hear how much it will cost to fix a scene that doesn’t work quite right. “For God’s sake,” I say, “leave it just like it is. It’s beautiful! Leave it be!”

I have become an enthusiast for the printed word again. I have to be that, I now understand, because I want to be a character in all of my works. I can do that in print. In a movie, somehow, the author always vanishes. Everything of mine which has been filmed so far has been one character short, and the character is me.

I don’t mean that I am a glorious character. I simply mean that, for better or for worse, I have always rigged my stories so as to include myself, and I can’t stop now. And I do this so slyly, as do most novelists, that the author can’t be put on film.

Every deeply felt novel which has been turned into a movie has, as a movie, seemed one character short to me. It has made me uneasy on that account. I suspect that the audience has been vaguely uneasy, too—for the same reason.

The worst thing about film, from my point of view, is that it cripples illusions which I have encouraged people to create in their heads. Film doesn’t create illusions. It makes them impossible. It is a bullying form of reality, like the model rooms in the furniture department of Bloomingdale’s.

There is nothing for the viewer to do but gawk. For example: there can be only one Clockwork Orange by Stanley Kubrick. There are tens of thousands of Clockwork Oranges by Anthony Burgess, since every reader has to cast, costume, direct, and design the show in his head.

The big trouble with print, of course, is that it is an elitist art form. Most people can’t read very well.

Well, so much for film as compared with print. As a friend said of another terrific theory of mine: “It has everything but originality.”

I might as well say something about the filming of my play Happy Birthday, Wanda June. It was one of the most embarrassing movies ever made, and I am happy that it sank like a stone.

I had nothing to do with the script of Slaughterhouse-Five, incidentally. That was the work of Steven Geller—and a good job it was. I didn’t meet him until after the picture opened. He is a novelist, too, and I asked him which he liked best, writing novels or screenplays. He preferred novels by far, since they were wholly under his control.

I told him what Bill Hickey, my actor friend, had said to me about writing for the legitimate theater or the screen, in effect: “Be prepared to direct what you write, or forget it. If you’re going to write something but not direct it, you’ll be doing only half your job.”

I would like to say something about American comedians: they are often as brilliant and magical as our best jazz musicians, and they have probably done more to shape my thinking than any writer. When people ask me who my culture heroes are, I express pious gratitude for Mark Twain and James Joyce and so on. But the truth is that I am a barbarian, whose deepest cultural debts are to Laurel and Hardy, Stoopnagel and Bud, Buster Keaton, Fred Allen, Jack Benny, Charlie Chaplin, Easy Aces, Henry Morgan, and on and on.

They made me hilarious during the Great Depression, and all the lesser depressions after that. When Bob Elliot and Ray Goulding agreed to work on this TV show, I nearly swooned. I would have been less in awe of Winston Churchill and Charles de Gaulle.

I wrote some of their jokes in this script, and they delivered them gracefully. But they also made up a lot of new stuff, even when the cameras weren’t operating, which made me laugh so hard that I thought I would go through the rest of my life wearing a truss.

One of them said this about Stony Stevenson’s mother: “She certainly has nice manners for a welfare deadbeat.” When they were asked out of the blue what an astronaut’s favorite food was out in space, there was no hesitation. The prompt answer was, “Dehydrated artichoke hearts.” And so on.

Or, Prometheus-5, a Space Fantasy 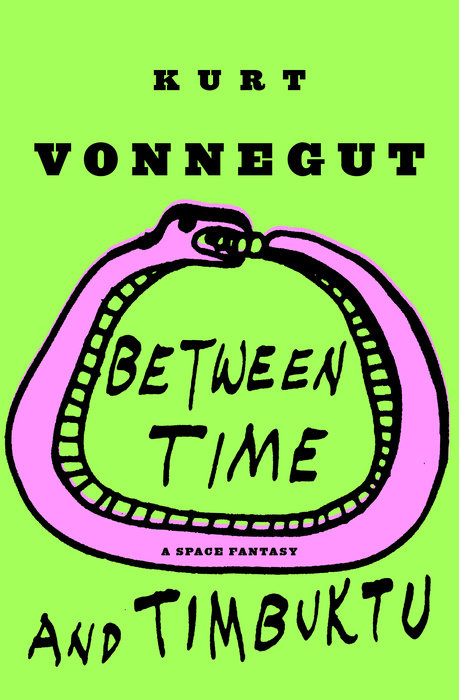