“Marvelous . . . [Vonnegut] wheels out all the complaints about America and makes them seem fresh, funny, outrageous, hateful and lovable.”—The New York Times

In Breakfast of Champions, one of Kurt Vonnegut’s most beloved characters, the aging writer Kilgore Trout, finds to his horror that a Midwest car dealer is taking his fiction as truth. What follows is murderously funny satire, as Vonnegut looks at war, sex, racism, success, politics, and pollution in America and reminds us how to see the truth.

An excerpt from Breakfast of Champions

Dwayne was a widower. He lived alone at night in a dream house in Fairchild Heights, which was the most desirable residential area in the city. Every house there cost at least one hundred thousand dollars to build. Every house was on at least four acres of land.

Dwayne's only companion at night was a Labrador retriever named Sparky. Sparky could not wag his tail--because of an automobile accident many years ago, so he had no way of telling other dogs how friendly he was. He had to fight all the time. His ears were in tatters. He was lumpy with scars.

Dwayne had a black servant named Lottie Davis. She cleaned his house every day. Then she cooked his supper for him and served it. Then she went home. She was descended from slaves.

Lottie Davis and Dwayne didn't talk much, even though they liked each other a lot. Dwayne reserved most of his conversation for the dog. He would get down on the floor and roll around with Sparky, and he would say things like, "You and me, Spark," and "How's my old buddy?" and so on.

And that routine went on unrevised, even after Dwayne started to go crazy, so Lottie had nothing unusual to notice.

Kilgore Trout owned a parakeet named Bill. Like Dwayne Hoover, Trout was all alone at night, except for his pet. Trout, too, talked to his pet.

But while Dwayne babbled to his Labrador retriever about love, Trout sneered and muttered to his parakeet about the end of the world.

It was Trout's theory that the atmosphere would become unbreathable soon.

Trout supposed that when the atmosphere became poisonous, Bill would keel over a few minutes before Trout did. He would kid Bill about that. "How's the old respiration, Bill?" he'd say, or, "Seems like you've got a touch of the old emphysema, Bill," or, "We never discussed what kind of a funeral you want, Bill. You never even told me what your religion is." And so on.

He told Bill that humanity deserved to die horribly, since it had behaved so cruelly and wastefully on a planet so sweet. "We're all Heliogabalus, Bill," he would say. This was the name of a Roman emperor who had a sculptor make a hollow, life-size iron bull with a door on it. The door could be locked from the outside. The bull's mouth was open. That was the only other opening to the outside.

Trout did another thing which some people might have considered eccentric: he called mirrors leaks. It amused him to pretend that mirrors were holes between two universes.

If he saw a child near a mirror, he might wag his finger at a child warningly, and say with great solemnity, "Don't get too near that leak. You wouldn't want to wind up in the other universe, would you?"

Sometimes somebody would say in his presence, "Excuse me, I have to take a leak." This was a way of saying that the speaker intended to drain liquid wastes from his body through a valve in his lower abdomen.

And Trout would reply waggishly, "Where I come from, that means you're about to steal a mirror."

By the time of Trout's death, of course, everybody called mirrors leaks. That was how respectable even his jokes had become.

In 1972, Trout lived in a basement apartment in Cohoes, New York. He made his living as an installer of aluminum combination storm windows and screens. He had nothing to do with the sales end of the business--because he had no charm. Charm was a scheme for making strangers like and trust a person immediately, no matter what the charmer had in mind.

Dwayne Hoover had oodles of charm.

I can have oodles of charm when I want to.

A lot of people have oodles of charm.

Trout's employer and co-workers had no idea that he was a writer. No reputable publisher had ever heard of him, for that matter, even though he had written one hundred and seventeen novels and two thousand short stories by the time he met Dwayne.

He made carbon copies of nothing he wrote. He mailed off manuscripts without enclosing stamped, self-addressed envelopes for their safe return. Sometimes he didn't even include a return address. He got names and addresses of publishers from magazines devoted to the writing business, which he read avidly in the periodical rooms of public libraries. He thus got in touch with a firm called World Classics Library, which published hard-core pornography in Los Angeles, California. They used his stories, which usually didn't even have women in them, to give bulk to books and magazines of salacious pictures.

They never told him where or when he might expect to find himself in print. Here is what they paid him: doodleysquat.

They didn't even send him complimentary copies of the books and magazines in which he appeared, so he had to search them out in pornography stores. And the titles he gave to his stories were often changed. "Pan Galactic Straw-boss," for instance, became "Mouth Crazy."

Most distracting to Trout, however, were the illustrations his publishers selected, which had nothing to do with his tales. He wrote a novel, for instance, about an Earthling named Delmore Skag, a bachelor in a neighborhood where everybody else had enormous families. And Skag was a scientist, and he found a way to reproduce himself in chicken soup. He would shave living cells from the palm of his right hand, mix them with the soup, and expose the soup to cosmic rays. The cells turned into babies which looked exactly like Delmore Skag.

Pretty soon, Delmore was having several babies a day, and inviting his neighbors to share his pride and happiness. He had mass baptisms of as many as a hundred babies at a time. He became famous as a family man. 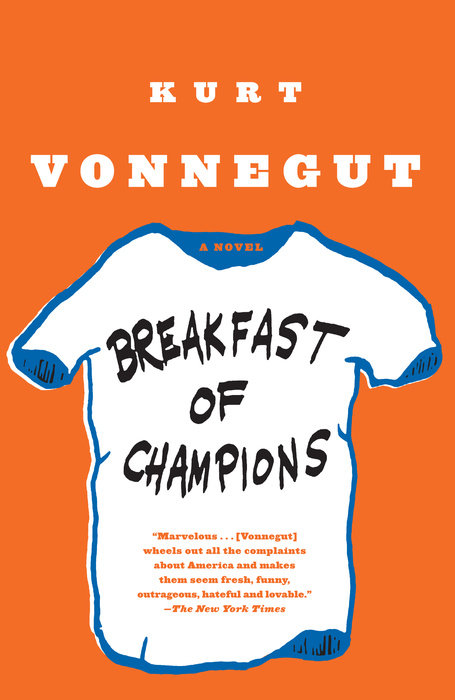