This extraordinary collection of personal correspondence has all the hallmarks of Kurt Vonnegut’s fiction. Written over a sixty-year period, these letters, the vast majority of them never before published, are funny, moving, and full of the same uncanny wisdom that has endeared his work to readers worldwide.

Included in this comprehensive volume: the letter a twenty-two-year-old Vonnegut wrote home immediately upon being freed from a German POW camp, recounting the ghastly firebombing of Dresden that would be the subject of his masterpiece Slaughterhouse-Five; wry dispatches from Vonnegut’s years as a struggling writer slowly finding an audience and then dealing with sudden international fame in middle age; righteously angry letters of protest to local school boards that tried to ban his work; intimate remembrances penned to high school classmates, fellow veterans, friends, and family; and letters of commiseration and encouragement to such contemporaries as Gail Godwin, Günter Grass, and Bernard Malamud.

Vonnegut’s unmediated observations on science, art, and commerce prove to be just as inventive as any found in his novels—from a crackpot scheme for manufacturing “atomic” bow ties to a tongue-in-cheek proposal that publishers be allowed to trade authors like baseball players. (“Knopf, for example, might give John Updike’s contract to Simon and Schuster, and receive Joan Didion’s contract in return.”) Taken together, these letters add considerable depth to our understanding of this one-of-a-kind literary icon, in both his public and private lives. Each letter brims with the mordant humor and openhearted humanism upon which he built his legend. And virtually every page contains a quotable nugget that will make its way into the permanent Vonnegut lexicon.

• On a job he had as a young man: “Hell is running an elevator throughout eternity in a building with only six floors.”
• To a relative who calls him a “great literary figure”: “I am an American fad—of a slightly higher order than the hula hoop.”
• To his daughter Nanny: “Most letters from a parent contain a parent’s own lost dreams disguised as good advice.”
• To Norman Mailer: “I am cuter than you are.”

Sometimes biting and ironical, sometimes achingly sweet, and always alive with the unique point of view that made him the true cultural heir to Mark Twain, these letters comprise the autobiography Kurt Vonnegut never wrote.

“[This collection is] by turns hilarious, heartbreaking and mundane. . . . Vonnegut himself is a near-perfect example of the same flawed, wonderful humanity that he loved and despaired over his entire life.”—NPR

An excerpt from Kurt Vonnegut

Vonnegut graduated from Shortridge High School in 1940 and enrolled in Cornell University. Due to his family’s financial troubles brought on by the Depression, he was told by his father and older brother not to waste time on “frivolous courses” but to study practical subjects, such as physics, chemistry, and math. He continued the social and writing activities he had engaged in at Shortridge, joining the Delta Upsilon fraternity and writing for The Cornell Daily Sun, becoming a columnist and managing editor.

He was failing his courses (after a bout with pneumonia) when he enlisted in the U.S. Army in 1943 and was assigned to the ASTP (Army Specialized Training Program), which sent him to Carnegie Tech and the University of Tennessee for training in mechanical engineering, then assigned him to the 106th Infantry Division. While he was home on leave from Camp Atterbury, outside Indianapolis, before being sent overseas, his mother, Edith Leiber Vonnegut, committed suicide from an overdose of sleeping pills on May 14, the day after Mother’s Day. “It is not known why my mother killed herself,” Kurt wrote in a letter of “biographical stuff” he sent to Professor Klinkowitz on December 11, 1976. “She never said anything about the awfulness of fighting against the homeland or anything like that. In fact, I don’t recall my parents’ ever having spoken of Germany as the homeland. . . . It was war itself that wrecked my mother, and not war against Germany. Also, she was taking an awful lot of barbiturates at a time when the side-effects were thought to be negligible.”

There were other factors, as recounted by Kurt’s “Uncle John” Rauch in “An Account of the Ancestry of Kurt Vonnegut, Jr., by an Ancient Friend of his Family” (quoted by Kurt in Palm Sunday). Rauch, a Harvard graduate and Indianapolis lawyer (and not really Kurt’s uncle but the husband of a first cousin), wrote that “With her other financial problems the prospect of losing her son in the impending holocaust made her cup of troubles overflow. She became despondent and morose. Wanting money desperately, she attempted to write short stories which she could sell, but it was a futile, hopeless venture; a tragic disillusion. She simply could not see daylight.”

As an advance intelligence and reconnaissance scout with the 106th Infantry during the Battle of the Bulge, Vonnegut was taken prisoner by the German Army and sent to Dresden, where he survived the firebombing of the city in an underground meat locker with other prisoners. He wrote in his “biographical” letter to Klinkowitz that “practically all my fellow prisoners were stockpiled in ASTP. Our own suspicion afterwards, since we had so little ammunition and were still awaiting winter equipment, and never saw an American plane or tank, and were not warned that the Germans were massing large numbers of tanks for one last major attack, is that the 106th was bait in a trap. In chess this is called a gambit. Take the exposed pawn and you’ve lost the game.”

Kurt’s lifelong friend Victor Jose, who went to Swarthmore with Jane Cox, believes that when Kurt was home on leave in 1944 he went to see Jane, whom he had met in kindergarten and dated when they went to Shortridge High School together. Victor remembers that Kurt “appeared on the scene just in time” to persuade her to break off her relationship with a college boyfriend and wait for him till he came home from the war. Kurt later wrote a fictionalized version of such an encounter in his short story “Long Walk to Forever” (collected in Welcome to the Monkey House).

After being honorably discharged from the Army in July of 1945 and awarded the Purple Heart, Kurt married Jane that September in a Quaker ceremony (Jane and her family were Quakers). A voracious reader, Jane had graduated from Swarthmore College as a Phi Beta Kappa the year before and was awarded a prize for having the best personal library of any graduating student. Kurt later told a friend that the books Jane brought to their marriage were her “dowry.” Kurt wrote in Fates Worse Than Death that, during their honeymoon, “She had me read The Brothers Karamazov. . . . She considered it the greatest of all novels.”

Kurt and Jane were both accepted into graduate programs at the University of Chicago and moved to that city in December of 1945. (Jane dropped out of her classes in Slavic languages and literature when she became pregnant in 1946.) Like many returning veterans, Kurt used his G.I. Bill to supplement his education, studying for a master’s degree in anthropology, and also worked as a reporter at the Chicago News Bureau. When his thesis was rejected—a comparative study of the Ghost Dance Society of the Plains Indians and the Cubist painters—and his first son, Mark, was born in 1947, Kurt decided to drop out and apply for jobs to support his family. (Their daughter Edith was added two years later, and their third child and second daughter, Nanette, was born in 1954.) Kurt turned down an offer from Bobbs-Merrill publishers in Indianapolis to accept a position in public relations for General Electric in Schenectady, New York, where his older brother, Bernard, worked as an atmospheric physicist. The pay was better, and both Kurt and Jane wanted a change of scene. Kurt’s classmate Victor Jose told me that “If they stayed in Indianapolis, they feared that Jane would be expected by her family to join the Junior League, and she and Kurt didn’t like that ‘socialite’ kind of life. They both were rebels even then.”

Working in public relations by day, Kurt wrote short stories at night and on weekends and sent them out to the leading popular and well-paying magazines of the era. This was “the golden age of magazines,” when William Faulkner published stories in Collier’s, F. Scott Fitzgerald appeared in The Saturday Evening Post, John Steinbeck in the Woman’s Home Companion, and Ernest Hemingway in Esquire. Four weeklies and six monthlies published three or four stories in every issue, and “the Vonnegut boy” was able to make a (precarious) living, support his family, and begin his career as a writer, selling short stories to those magazines.

Unlike his mother’s failed efforts in the same enterprise, Vonnegut succeeded. The break came when Knox Burger, a Cornell graduate who’d gone on to become fiction editor at Collier’s magazine, recognized Kurt’s name on a story submission. He asked in a scrawled note at the bottom of a rejection slip if he was the Kurt Vonnegut who’d gone to Cornell and written for The Cornell Sun. It turned out to be the start of a relationship that led to acceptance of his first short story and launched his career as a writer.

To Kurt Vonnegut, Sr., and family

This was the first letter that PFC Kurt Vonnegut, Jr., wrote to his family after being released as a prisoner of war.

Victor Jose, Kurt’s friend from Shortridge High School in Indianapolis (and later the Chicago News Bureau), wrote in a note to me that “I believe this letter was first read publicly in 1945 at a meeting of The Portfolio Club of artists and literary people [in Indianapolis], to which my parents belonged.” Jose said his parents told him the letter was read to the group by Kurt’s father, who was also a member of the club.

This letter recounts the experience—the firebombing of Dresden—that would shape the theme of Kurt’s later work and come to its powerful fruition with his 1969 novel Slaughterhouse-Five, which became an international bestseller and catapulted its author to worldwide fame. There is also a foreshadowing of his future style in the understated dark irony of the grim events he reports and his own survival. “But not me . . . but not me” seems later to echo in the phrase that would famously be repeated in much of his published work: “So it goes . . .” 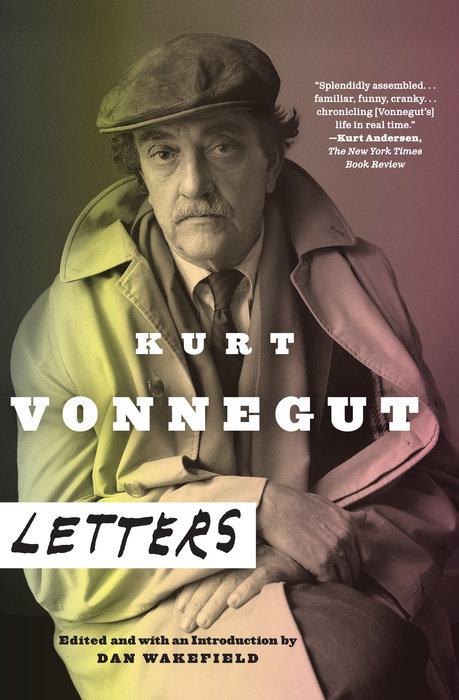