Drawing upon previously secret KGB records released exclusively to Allen Weinstein and Alexander Vassiliev, The Haunted Wood reveals for the first time the riveting story of Soviet espionage's "golden age" in the United States, from the 1930s through the early cold war.

An excerpt from The Haunted Wood

Tucked into a quiet side street a few blocks from Moscow's notorious Lubyanka prison and the grimy buildings of the Soviet Union's KGB stands an unmarked four-story house, until recently the Press Bureau of Russia's Foreign Intelligence Service (or SVR). From 1994 to 1996, my Russian co-author, Alexander Vassiliev, and I pursued research on The Haunted Wood in this sanctum of secrets through a unique 1993 agreement between Random House and the SVR's "old boy" organization of former KGB agents, the Association of Retired Intelligence Officers (ARIO).

In return for payments made to that group, the SVR agreed to permit Vassiliev, a journalist who had once worked for Soviet intelligence, and me substantial and exclusive access to Stalin-era operational files of the KGB and its predecessor agencies.

Our contract allowed Vassiliev, who had retired from the KGB in 199o because of his opposition to Soviet leadership, to review archived documents and to make summaries or verbatim transcriptions from the files, including their record numbers. The documentary material, organized into topical areas, was then submitted to a panel of the SVR's leading officials for review and eventual release. Throughout this process, I worked alongside Vassiliev during more than two dozen visits to Moscow: monitoring the information found, prodding the SVR to expedite release of material submitted, and organizing Western primary and secondary research data essential to the book.

As relations between the United States and Russia grew strained, the SVR became less cooperative about providing timely release of the reviewed documentary materials. By late 1995, there were no more releases, and SVR officials had begun to express concern about the extensive and revealing data previously turned over: "The problem is that you know too much," one leading official told me while examining a gift copy of an earlier book of mine, Perjury: The Hiss-Chambers Case. In 1996, Alexander Vassiliev accepted a journalist's assignment abroad and moved with his family to England.

By that time we had received a critical mass of the , released KGB material. Using Vassiliev's initial draft and translations while incorporating new Western documentation, I wrote the English-language manuscript, and Vassiliev is now preparing The Haunted Wood's Russian-language edition. The book was not submitted for SVR scrutiny before
publication.

During many visits to Moscow, I benefited also from the SVR's hospitality, which increased my knowledge of Soviet intelligence practices. Often, I was hosted in the Press Bureau's plush upstairs dining and reception rooms by General Vadim Kirpichenko, head of the senior officials' influential advisory group to then-SVR Director Yevgeny Primakov (now Russia's Prime Minister) and by General (then Colonel) Yuri Kobaladze, chief of the Press Bureau and Russian intelligence's public relations mastermind. Occasionally, Director Primakov himself would join these luncheons or dinners, which always provoked spirited discussion of current Russian-American relations.

Sometimes there were surprise guests. On one occasion, convicted Soviet agent George Blake, who had escaped from an English jail to KGB sanctuary in Moscow, proved a fluent and gracious dinner partner. On another evening, General Kirpichenko escorted me to a nearby SVR hospital for a rare visit with the aged and ailing Morris Cohen (a.k.a. Peter Kroger) who, along with his wife, Lona Cohen, served Soviet intelligence both in the United States (Lona was a courier in the atom spy ring) and later as an active agent in England. Cohen, who died shortly after this visit, provided fascinating stories of his life as an American Communist.

In 1993, during the brief honeymoon period of Russian-American intelligence relations prior to the exposure of Aldrich Ames, both Kirpichenko and Kobaladze- joined by another Soviet general, Konstantin Gueyvandov, the head of ARIO-visited the United States as my guests. Their meetings included a private talk with then-CIA Director R. James Woolsey at my home; a visit, hosted by former CIA Director William Colby, to the New York office of OSS founder General William "Wild Bill" Donovan (whose personal and agency entanglements with Soviet intelligence are described in these pages); and conversations with leading CIA and FBI counterintelligence officials at the request of those officials.

In Moscow, meanwhile, a great deal of additional and important unreviewed KGB material reached us informally from other, non-KGB sources during our research and has been incorporated into the book. We thank those responsible for this help and have honored their requests for anonymity.

Adding to the SVR's evident distress concerning this book, the release in 1995-96 of the previously classified VENONA cables -2,900 translated intercepts sent by Soviet agents in the United States to Moscow about their intelligence efforts during World War 11 -allowed us to corroborate further a number of episodes in The Haunted Wood. Over forty intercepted VENONA cables that match those found in the KGB archives in Moscow are quoted in text footnotes to allow readers to compare the two versions, and dozens of additional VENONA cables are cited where appropriate in the backnotes. Much of the inside history of Soviet espionage in the United States, until now seen (if at all) through a glass darkly, thus emerges with fresh clarity in these pages.

Readers with an ideological axe to grind regarding Soviet espionage will find little comfort in The Haunted Wood. The book neither denounces nor defends Moscow's American espionage in the overheated manner that has characterized much Cold War literature on this subject. Rather, we have tried simply to relate the story found in the KGB archives' documents themselves. The Soviet records are filled with struggles for control among contending operatives, love affairs among the agents, dramatic personality conflicts, and occasionally even vivid accounts of plotted or actual murders. In the end, the underground world that emerges was far more contentious, chaotic, and confused than previous accounts by both Russian and Western writers would suggest.

A small sampling of the Americans who served as Soviet agents and sources during this era, described in these pages, would include:

¸   the passionate daughter of the American Ambassador to Nazi Germany;
¸   an influential (and surprising) member of Congress;
¸   one of President Roosevelt's personal assistants;
¸   a close family friend of Eleanor and Franklin Roosevelt (who had been recruited for Soviet intelligence by members of England's "Cambridge ring");
¸   the leader of a group of agents-all U.S. government officials--who shared his wife with one of his sources in a menage a trois; and
¸   the head of the American Communist Party, who also served as an agent and recruiter of other covert sources.

Soviet operatives in the United States during these years ranged from many who were highly sophisticated practitioners of tradecraft to bumbling amateurs. One steered Moscow into a Hollywood producer source's music publishing company while others considered similar "joint ventures" with the producer in various film projects. One hapless Washington station chief spoke almost no English while another operative plotted "cover" identities in the business world and a third worked both as station chief and as Soviet Ambassador to the United States!

But "the haunted wood" normally experienced far more tragedy than comedy. Thus, while hounded by both Soviet and U.S. intelligence operatives, one troubled former American agent of Moscow's jumped (or fell) to his death at his office building. During the bloody 1936-39 purge years in the USSR, several loyal station chiefs and operatives obeyed instructions to return home despite their recognition that arrest, torture, and execution probably awaited them. Others stalled and remained at their posts in the United States, thereby saving their lives. For those, whether in Western Europe or in the United States, who defected from Soviet intelligence and refused to suffer voluntarily Stalin's vengeance, assassins were sent to hunt them down-successfully sometimes, as in the murder of station chief-in-hiding Ignatz Reiss in Switzerland, and sometimes not, as in the failure to eliminate American defectors Elizabeth Bentley and Whittaker Chambers.

Normally, Soviet operatives and their American agent-sources pursued valuable (occasionally breakthrough) information -scientific, technical, military, and governmental -while, on occasion, their assignments approached the bizarre. Stalin was obsessed, for example, with a need to infiltrate every small and pathetic Russian pro-monarchist group in the world two decades after the overthrow of the Romanovs, and years after Soviet intelligence succeeded in killing his arch rival Leon Trotsky, the pursuit of Trotskyists continued unabated.

For the most part, however, Soviet operatives and their American agents collected during the 1930s and 1940s a remarkable range of material on U.S. industrial and military production culminating in the data provided by its sources within the atomic research program during World War II. Moreover, during the New Deal and war years, the Soviets benefited from a voluminous amount of information coming from its key agents in a range of U.S. government agencies, including the Office of Strategic Services (OSS), America's major foreign intelligence agency from 1942 to 1945.

Often the most insightful personal material on its American agents was contained in the "autobiographies" Moscow requested from these individuals for inclusion in their personnel files, and which are quoted throughout this book. The "cast of characters" will provide readers with some indication of the range of remarkable, occasionally improbable, people whose human dramas crowd the following pages. Their intersecting stories, drawn from the archives of the KGB, form the narrative heart of The Haunted Wood.

Notwithstanding the significant amount of previously unknown material, this account does not claim to be a definitive history of Soviet espionage in the United States during the Stalin era. That book awaits unlimited access not only to Soviet archives but to still-restricted British and American intelligence files. Only then can a complete, dispassionate, and multiarchival history of the subject be written.

In the end, research for this book benefited enormously from the fact that from 1993 to 1995, before they shut down, Russia's intelligence archivists and officials often released pivotal files that more attentive guardians might have withheld. Fortunately, the archivists who assisted us appeared to be as unfamiliar with the history of Soviet intelligence during the Stalin era as were those FBI agents who reviewed Bureau records at my request in the mid-1970s concerning the Bureau's earlier history. (With help from the American Civil Liberties Union, in 1974, 1 won the first Freedom of Information Act lawsuit concerning historical records requested from the FBI.)

Or did some historically minded archivists in Moscow actually wish to assist the authors in producing a more complete and accurate account of Soviet intelligence than the one found in the existing literature of both countries? That, after all, has been, from the start, our major reason for writing The Haunted Wood.

Allen Weinstein is the president and CEO of the Center for Democracy. A historian by training (with professorships at Smith, Georgetown, and Boston University), he is based in Washington, D.C.

Allen Weinstein is founder and president of The Center for Democracy. His books include Freedom and Crisis: An American History, and Perjury: The Hiss-Chambers Case. He lives in Washington, D.C.

Alexander Vassiliev is a Russian journalist. He is a former KGB agent and lives in Western Europe. 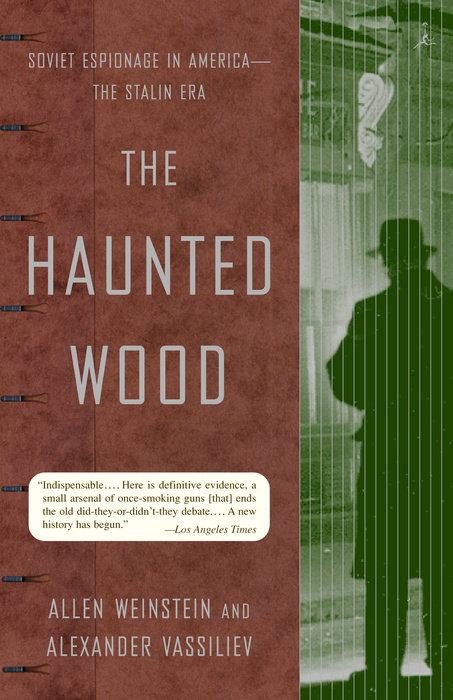