In this beautifully written biography, Alison Weir paints a vibrant portrait of a truly exceptional woman and provides new insights into her intimate world.

Renowned in her time for being the most beautiful woman in Europe, the wife of two kings and mother of three, Eleanor of Aquitaine was one of the great heroines of the Middle Ages. At a time when women were regarded as little more than chattel, Eleanor managed to defy convention as she exercised power in the political sphere and crucial influence over her husbands and sons.

Eleanor of Aquitaine lived a long life of many contrasts, of splendor and desolation, power and peril, and in this stunning narrative, Weir captures the woman—and the queen—in all her glory. With astonishing historic detail, mesmerizing pageantry, and irresistible accounts of royal scandal and intrigue, she recreates not only a remarkable personality but a magnificent past era.

An excerpt from Eleanor of Aquitaine

Eleanor of Aquitaine was born into a Europe dominated by feudalism. In the twelfth century there was no concept of nationhood or patriotism, and subjects owed loyalty to their ruler, rather than the state.

Europe was split into principalities called feudatories, each under the rule of a king, duke, or count, and personal allegiance, or fealty, was what counted. This was expressed in the ceremony of homage, in which a kneeling vassal would place his hands between those of his overlord and swear to render him service and obedience.

The most powerful kings and lords could command obedience and aid from lesser rulers; a breach of fealty was generally held to be dishonourable, and although some paid mere lip service to the ideal, the threat of intervention in a dispute by one’s overlord often remained an effective restraint. On the other hand, an overlord was bound to offer protection, friendship, and aid to a vassal beset by enemies, so the system had its advantages.

Feudal Europe was essentially a military society. Warfare was the business of kings and noblemen, and to many it was an elaborate game played by the rules of chivalry, a knightly code embodying ideals of courage, loyalty, honesty, courtesy, and charity. These rules were often strictly observed, and any breach of them was regarded with opprobrium.

Kings and lords might engage in the most bloody conflicts, but once sieges were broken, castles and territory taken, and a truce signed, it was agreed to be in everyone’s best interests for good relations to be restored-until the next conflict broke out. Thus, rulers could be enemies one month, yet swear undying friendship the next; such was the shifting scene of twelfth-century politics. The real victims of war were, of course, the peasants and townsfolk, who served as foot soldiers or were innocent victims of the sacking of towns and villages by mercenaries or the notoriously violent routiers, ruthless desperadoes whose lives were dedicated to fighting and plunder. Humble noncombatants often perished in vast numbers at the whim of their rulers-even that of Eleanor herself.


Christianity governed the lives of everyone in feudal Europe. Belief in the Holy Trinity was universal, and any deviation from the accepted doctrines of the Catholic Church-such as the heresies of the Cathars in southern France-was ruthlessly suppressed. Holy Church, presided over by the Pope in Rome, was the ultimate authority for all spiritual and moral matters, and even kings were bound by her decrees.

In this martial world dominated by men, women had little place. The Church’s teachings might underpin feudal morality, yet when it came to the practicalities of life, a ruthless pragmatism often came into play. Kings and noblemen married for political advantage, and women rarely had any say in how they or their wealth were to be disposed in marriage. Kings would sell off heiresses or rich widows to the highest bidder, for political or territorial advantage, and those who resisted were heavily fined.

Young girls of good birth were strictly reared, often in convents, and married off at fourteen or even earlier to suit their parents’ or over-lord’s purposes. The betrothal of infants was not uncommon, despite the Church’s disapproval. It was a father’s duty to bestow his daughters in marriage; if he was dead, his overlord or the King himself would act for him. Personal choice was rarely an issue.

Upon marriage, a girl’s property and rights became invested in her husband, to whom she owed absolute obedience. Every husband had the right to enforce this duty in whichever way he thought fit-as Eleanor was to find out to her cost. Wife-beating was common, although the Church did at this time attempt to restrict the length of the rod that a husband might use.

It is fair to say, however, that there were women who transcended the mores of society and got away with it: the evidence suggests that Eleanor of Aquitaine was one such. There were then, as now, women of strong character who ruled feudal states and kingdoms, as Eleanor did; who made decisions, ran farms and businesses, fought lawsuits, and even, by sheer force of personality, dominated their husbands.

It was rare, however, for a woman to exercise political power. Eleanor of Aquitaine and her mother-in-law the Empress Matilda were among the few notable exceptions, unique in their time. The fact remained that the social constraints upon women were so rigidly enforced by both Church and state that few women ever thought to question them. Eleanor herself caused ripples in twelfth-century society because she was a spirited woman who was determined to do as she pleased. Eleanor of Aquitaine was heiress to one of the richest domains in mediaeval Europe. In the twelfth century, the county of Poitou and the duchies of Aquitaine and Gascony covered a vast region in the south-west of what is now France, encompassing all the land between the River Loire in the north and the Pyrenees in the south, and between the Rhône valley and the mountains of the Massif Central in the east and the Atlantic Ocean in the west.

In those days the kingdom of France itself was small, being centred mainly upon Paris and the surrounding area, which was known from the fourteenth century as the Île de France; yet its kings, thanks to the legacy of the Emperor Charlemagne, who had ruled most of northern Europe in the eighth century, were overlords of all the feudatories in an area roughly corresponding to modern France.

Poitou was the most northerly of Eleanor’s feudatories: its northern border marched with those of Brittany, Anjou, and Touraine, and its chief city was Poitiers. Perched on a cliff, with impressive ramparts, this was the favourite seat of its suzerains. To the east was the county of Berry, and to the south the wide sweep of the duchy of Aquitaine, named “land of waters” after the great rivers that dissected it: the Garonne, the Charente, the Creuse, the Vienne, the Dordogne, and the Vézère. The duchy also incorporated the counties of Saintonge, Angoulême, Périgord, the Limousin, La Marche, and the remote region of the Auvergne. In the south, stretching to the Pyrenees, was the wine-producing duchy of Gascony, or Guienne, with its bustling port of Bordeaux, and the Agenais. All these lands comprised Eleanor’s inheritance.

It was a rich one indeed, wealthier than the domain of its overlord, the King of France. “Opulent Aquitaine, sweet as nectar thanks to its vineyards dotted about with forests, overflowing with fruit of every kind, and endowed with a superabundance of pasture land,” enthused one chronicler, Heriger of Lobbes. Ralph of Diceto wrote that the duchy “abounds with riches of many kinds, so excelling other parts of the western world that it is considered by historians one of the most fortunate and prosperous provinces of Gaul.”

The region boasted a temperate climate, and its summers could be very warm. It was a land of small walled cities, fortified keeps, moated castles, wealthy monasteries, sleepy villages, and prosperous farms. Its houses were built with white or yellow walls and red-tiled roofs, as many still are today. To the east and south, the land was hilly or mountainous, while fertile plains, high tors, and dense woodland were features of Poitou and Aquitaine, and flat sandy wastes and scrubland characterised Gascony.

The people of Aquitaine, who were mostly of Romano-Basque origin, were as diverse as its scenery. In the twelfth century, The Pilgrim’s Book of Compostela described the Poitevins as handsome, full of life, brave, elegant, witty, hospitable, and good soldiers and horsemen, and the natives of Saintonge as uncouth, while the Gascons-although frivolous, garrulous, cynical, and promiscuous-were as generous as their poverty permitted. In fact, the whole domain was merely a collection of different lordships and peoples with little in common, apart from their determination to resist interference by their overlord, the Duke.

Most people in Aquitaine spoke the langue d’oc, or Provençal, a French dialect that derived from the language spoken by the Roman invaders centuries before, although there were a number of local patois. North of the River Loire, and in Poitou, they spoke the langue d’oeil, which to southerners seemed a different language altogether. Eleanor of Aquitaine probably spoke both dialects, although it appears that the langue d’oc was her mother tongue.

The Aquitanian lordships and their castles were controlled by often hostile and frequently feuding vassals, who paid mere lip service to their ducal overlords and were notorious for their propensity to rebel and create disorder. These turbulent nobles enjoyed a luxurious standard of living compared with their unwashed counterparts in northern France, and each competed with his neighbour to establish in his castle a small but magnificent court. Renowned for their elegance, their shaven faces and long hair, the Aquitanian aristocracy were regarded by northerners as soft and idle, whereas in fact they could be fierce and violent when provoked. Self-interest was the dominant theme in their relations with their liege lords: successive dukes had consistently failed to subdue these turbulent lords or establish cohesion within their own domains.

The authority of the dukes of Aquitaine held good, therefore, only in the immediate vicinities of Poitiers, their capital, and Bordeaux. Al-though they claimed descent from Charlemagne and retained his effigy on the coinage of Poitou, they did not have the wealth or resources to extend their power into the feudal wilderness beyond this region, and since their military strength depended upon knight service from their unruly vassals, they could not rely upon this. Consequently, Aquitaine lagged behind northern France in making political and economic progress. 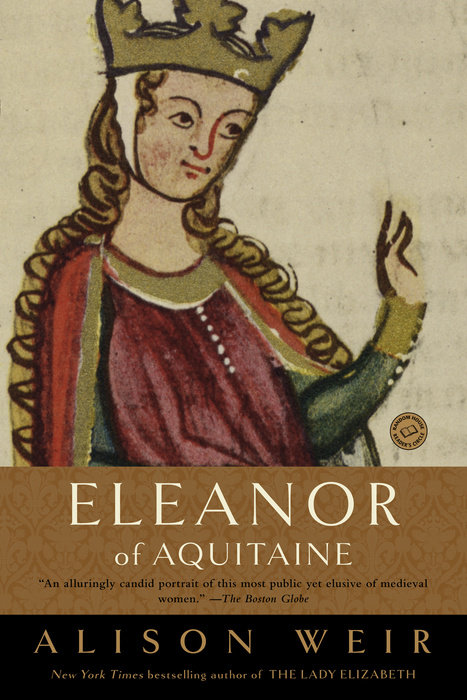