Perhaps the most influential sovereign England has ever known, Queen Elizabeth I remained an extremely private person throughout her reign, keeping her own counsel and sharing secrets with no one--not even her closest, most trusted advisers. Now, in this brilliantly researched, fascinating new book, acclaimed biographer Alison Weir shares provocative new interpretations and fresh insights on this enigmatic figure.

Against a lavish backdrop of pageantry and passion, intrigue and war, Weir dispels the myths surrounding Elizabeth I and examines the contradictions of her character. Elizabeth I loved the Earl of Leicester, but did she conspire to murder his wife? She called herself the Virgin Queen, but how chaste was she through dozens of liaisons? She never married—was her choice to remain single tied to the chilling fate of her mother, Anne Boleyn? An enthralling epic that is also an amazingly intimate portrait, The Life of Elizabeth I is a mesmerizing, stunning reading experience.

An excerpt from The Life of Elizabeth I

1
‘The Most English Woman in England’

The first act of Queen Elizabeth had been to give thanks to God for her peaceful accession to the throne and, as she later told the Spanish ambassador, to ask Him ‘that He would give her grace to govern with clemency and without bloodshed’. With the calamitous example of her sister before her, she had already decided that there should be no foreign interference in the government of England, not from Spain or Rome or anywhere else, and was resolved to be herself a focus for English nationalism – ‘the most English woman in England’.

Elizabeth could certainly boast of her English parentage. Her father, Henry VIII, had been of royal Plantagenet stock, with some Welsh blood from his father Henry VII, while Elizabeth’s mother, Anne Boleyn, had been an English commoner whose ancestors had been Norfolk farmers and merchants who had risen to prominence through their wealth and a series of advantageous marriages with daughters of the nobility. Through Anne’s mother, Elizabeth Howard, Elizabeth was related to the Howards, earls of Surrey and dukes of Norfolk, England’s premier peers, and through the Boleyns themselves to many other notable English families such as the Careys and the Sackvilles.

When Henry VIII fell in love with Anne Boleyn in approximately 1526, he had been married for seventeen years to a Spanish princess, Katherine of Aragon, whose maid of honour Anne was. Katherine had failed to provide Henry with the male heir he so desperately needed, and for some years he had entertained doubts about the validity of the marriage, on the grounds that the Bible forbade a man to marry his brother’s widow: Katherine had briefly been married to his elder brother Arthur, who died aged fifteen, but she stoutly maintained that the marriage had never been consummated.

Henry had had affairs before, but his passion for Anne Boleyn was all-consuming, and burned ever more fiercely after she made it clear that she would not be his mistress. Her virginity, she declared provocatively, would be the greatest gift she would bring her husband.

By early 1527, Henry VIII had decided to apply to the Pope for an annulment of his marriage. At around the same time, he resolved to have Anne Boleyn for his wife, as soon as he was free. But the Pope, scared of Katherine’s powerful nephew, the Holy Roman Emperor Charles V, refused to co-operate. The King’s ‘Great Matter’ dragged on for six years, by the end of which time the English Church had been severed from the Church of Rome, and Henry VIII had declared himself its Supreme Head. Thus liberated, he was able to have his marriage to Katherine declared null and void, and marry Anne, which he did as soon as she became pregnant in 1533. The new Queen was vastly unpopular among his subjects.

Henry and Anne had confidently anticipated that their child would be a son, and were disappointed when it turned out to be a girl. Named after both her grandmothers, Elizabeth of York and Elizabeth Howard, the Princess Elizabeth was nevertheless a healthy baby, and her parents were hopeful of providing her with a brother shortly.

This was not to be. Two, possibly three unsuccessful pregnancies followed, during which time Henry fell out of love with Anne and began paying court to one of her ladies, Jane Seymour. He had realised also that Anne was entirely unsuitable as queen, since she was over-flirtatious, immoderate in her public behaviour, and vengeful towards her enemies. She was, in the brief time allowed her, a good mother, incurring her husband’s displeasure by insisting on breastfeeding Elizabeth herself, which high-born mothers never did, and choosing pretty clothes for the child. She rarely saw her, however, for the Princess was given her own household at Hatfield House at three months old, and thereafter her mother could only visit when her other duties permitted.

The loss of a stillborn son in January 1536, on the day of Katherine of Aragon’s funeral, sealed Anne’s fate. Arrested with five men, one her brother, she was charged with plotting to murder the King and twenty-two counts of adultery – eleven of which have since been proved false, which suggests that the rest, for which there is no corroborative evidence, are equally unlikely. Anne was taken to the Tower, tried and condemned to death. After her marriage had been annulled and her daughter declared a bastard, she was beheaded on 19 May 1536.

Elizabeth was not yet three when her mother was executed, and no one knows when or how or what she found out about that tragic event. She was a precocious child, and soon noticed the change in her life, asking her governor why she had been addressed as my Lady Princess one day and merely as my Lady Elizabeth the next. The loss of her father’s favour can only have led to more awkward questions, so it is reasonable to suppose that she found out what had happened to her mother sooner rather than later. The effect on her emotional development can only be guessed at, but it must have been profound.

Nor do we know whether or not she believed in her mother’s guilt. She made only two references in adult life to Anne Boleyn, neither of them particularly revealing, although she was close to, and promoted the interests of, several relatives on her mother’s side. What is clear is that throughout her life she revered the memory of her sometimes terrifying father, who had had her declared baseborn and could not bear to have much contact with her in the years following Anne Boleyn’s disgrace. Those years brought a succession of stepmothers, all of whom took pity on the motherless child and did their best to restore her to favour.

Perhaps the worst episode in her childhood occurred when Elizabeth was eight. The King’s fifth wife, Katherine Howard, a cousin of Anne Boleyn, was a giddy young girl who unwisely admitted former lovers into her household and – it was later alleged – into her bed. Late in 1541 her crimes were discovered. The King wept when told, but would not see her. In February 1542, she met the same fate as Anne Boleyn.

It was around this time that Elizabeth told her friend, young Robert Dudley, son of the Earl of Warwick, ‘I will never marry.’ Some writers have suggested that the events of her childhood led her to equate marriage with death, and although there is no evidence to support this theory, there can be little doubt that this was a traumatic time for Elizabeth, with Katherine Howard’s execution reviving painful thoughts of what had happened to her mother.

It was not until Henry married Katherine Parr in 1543 that Elizabeth came to enjoy a semblance of family life, as the Tudors understood it, and even then she incurred her father’s displeasure for an unknown offence and was banned from seeing him for a year. They were reconciled before his death in January 1547, when his nine-year-old son Edward VI succeeded to the throne and Elizabeth went to live under the guardianship of Katherine Parr at the latter’s dower palace at Chelsea.

Henry VIII may have neglected his younger daughter in many ways, but he did ensure that from the age of six she should be educated as befitted a Renaissance prince. Katherine Parr made it her business to supervise the education of her stepchildren and engaged the best tutors for Elizabeth, among them William Grindal and the celebrated Cambridge scholar, Roger Ascham. Ascham and his circle were not only humanists, dedicated to the study of the ancient Greek and Latin classics and to the education of women, but also converts to the reformed faith, or Protestants, as such people were now known, and it is almost certain that Elizabeth was fired by their ideals at an impressionable age.

She had a formidable intelligence, an acute mind and a remarkably good memory. Ascham declared he had never known a woman with a quicker apprehension or a more retentive memory. Her mind, he enthused, was seemingly free from all female weakness, and she was ‘endued with a masculine power of application’; he delighted in the fact that she could discourse intelligently on any intellectual subject. There were many learned ladies in England, but Ascham was not exaggerating when he claimed that ‘the brightest star is my illustrious Lady Elizabeth’.

Like most educated gentlewomen of her day, Elizabeth was encouraged to become the equal of men in learning and to outdo ‘the vaunted paragons of Greece and Rome’. The curriculum devised for her was punishing by today’s standards, but she thrived on intellectual exercises and had a particular gift for languages, which she enjoyed showing off. As queen, she read and conversed fluently in Latin, French, Greek, Spanish, Italian and Welsh. She had read the New Testament in Greek, the orations of Isocrates and the tragedies of Sophocles, amongst other works. Her interest in philosophy and history was enduring, and throughout her life she would try to set aside three hours each day to read historical books. 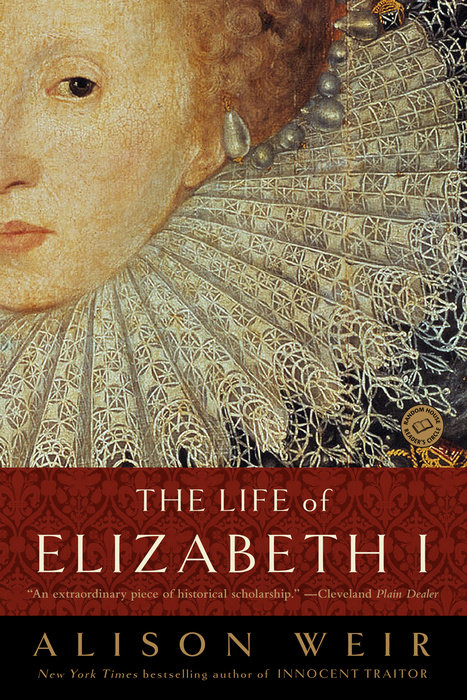