The Mother of all Motherhood novels.

In this riotously funny, ruefully honest, and irresistibly warmhearted debut, Samantha Wilde writes about one new mother who discovers the wonders and terrors of motherhood—one hilarious crisis at a time. For new moms, potential moms-to-be, and anyone who just wants to (wisely) live the experience vicariously…

New mom Joy McGuire hasn’t changed her sweatpants since her baby was born. Of course she’s crazy about her newborn son; it’s her distracted, work-obsessed husband and his impossible mother she can’t stand. Joy turns to her own mom for support, but she’s too busy planning her fourth wedding to a suspicious self-help guru. Sure, Joy’s a woman on the brink, but it’s nothing a little sleep, sanity, and chocolate can’t fix.

Until her old college boyfriend shows up at their ten-year reunion. The one she was still in love with when she married her husband. It must be the lack of sleep, because Joy is starting to think she might have ended up with the wrong man. Not to mention she’s obsessed with her sexy yoga instructor, who might just be interested in her. Joy used to be single, skinny, and able to speak in complete sentences, but who is she now? As she’s trying to figure that out, her husband goes missing….

Frank, bawdy, and full of keenly self-aware observations, this novel tells the story of one new mother, three men, one marriage, and the baby love that keeps us up at night

An excerpt from This Little Mommy Stayed Home


I KEEP SLIPPING UP AND SAYING POSTMORTEM WHEN I mean postpartum. I’m two weeks postmortem now, so I guess I shouldn’t expect more of myself. It’s like my hormones are playing Pac- Man with my brain cells—eating them, one by one. But is that really the worst thing in the world? Not by a long shot. The worst thing in the world is the feeling I have every time I sit on the toilet. If I reach down I can feel my perineum dangling just above the water line. (If you don’t know what your perineum is, lucky you. There are some body parts better left to obscurity.) The doctor who stitched me up didn’t mince words: “There,” she said, completing her work. “Now it looks like a vagina again.”

What a relief, then, that it looks like a vagina and not, say, like an Australian sheepdog or a jar of moldy marmalade. I should be so grateful! I hadn’t realized I could have walked out of the hospital with an etching of one of the presidents between my legs, like at Mount Rushmore. Or maybe it was more like Alice Cooper or another scary rock star way past his prime. What’s black and blue with hair all over? Or maybe it wasn’t black and blue from my son’s overeager exit. Maybe it could have still made it into a book of feminist art, still looking like a pink orchid, just perhaps a new long- petaled variety? I’ll never know what that doctor knew. Shucks.

At any rate, I’d imagine a vagina is a good thing for a vagina to look like. I haven’t personally looked at it lately. I’m trying to medicate its existence away with the hard-core drugs the hospital gave me (Ibuprofen). I have a friend who did the Our Bodies Ourselves know- yourself- better- labialook- squat over a mirror at one week postmortem, and I don’t think she ever recovered. She said it looked crooked, misplaced, like her vaginal lips had migrated to her inner thigh. It was funnier than the Vagina Monologues, she told me, except she didn’t have the heart to appreciate it, since, after all, it was her vagina giving the monologue like a fat old man with a lisp—not really the character you’d want your vagina to play in the show, if given the chance.

Am I screaming? I shouldn’t do that. I’ll wake the baby. Oh, God, I love that baby. I guess I only have so much love in my heart. There’s no more room for anyone else anymore. Which is a surprise, since my breasts and my chest have all expanded so radically I could develop a new career in a carnival sideshow. My husband, the master of making lemonade out of—well, melons—took advantage of the moment of what is called engorgement and took pictures of my breasts. That’s the time when your milk first comes in and each breast weighs more than the baby doubled. Hey! I guess my husband has noticed me since “the great event.” Or parts of me, anyhow. I love having a new baby. No, really, as much as it sounds like I don’t, I do. It beats every other job I’ve had: shelving books in the library (college), catering (postcollege) and, my most recent, real adult- job, freelance editing (something to do with my English degree). Motherhood’s the only job I’ve ever had where staying in your pajamas all day and spending as much time in bed as you possibly can is encouraged. That’s got to be an overlooked benefit to having a newborn. It’s just not pure pleasure all the time. It’s not pure pleasure most of the time. But they tell me it will pass.

I lie down on the bedroom floor some days and weep while my husband locks himself in the bathroom with his Nintendo DS and takes an hourlong dump. I cry because I want that. I want to be able to do that. I want to be able to poop, and I want an hour to myself. But in addition to constipation, tearing and POP (pain on pooping), I am on call. I am the new 7- Eleven. I am open for business all hours of the day and night. When no one else is around, which is most of the time, I circle the house topless because there seems no reason to wear a bra or a shirt. My breasts have become a public commodity, at least locally. The baby nurses about every tenth breath he takes. I am the milk factory that never closes its doors. I am every man’s wet dream. A busty babe on constant display.

Actually, I think that’s too generous. I am most definitely nobody’s wet dream. I’ve taken to calling my belly Lumpkin, to be affectionate. My abdominal exercises consist of lying on the floor and breathing. My aerobic activity is a walk to the mailbox. When I walk down the driveway to pick up the mail I feel like a prisoner newly released. The sun offends me. Lying in bed, trying to nap, I hear the neighbors’ daughters playing in the yard. I don’t sleep; I lie still and think of how much I hate them. I think of how they have everything, even flat bellies. Even vaginas that look so much like vaginas no one would need to point it out. My only weapon is time and the pathetic hope that they will kneel on a gurney one day dripping feces, blood and meconium, begging for drugs, their slender white bottoms quivering ever so slightly as they bump into the elevator and head to maternity.

Samantha Wilde, the mother of three young children born in just over four years, openly admits to eating far, far too much chocolate—usually to keep her awake during nap time so she can write some books. Before she took on mothering as a full-time endeavor, she taught more than a dozen yoga classes a week (now she teaches one). She’s a graduate of Concord Academy, Smith College, Yale Divinity School and The New Seminary, as well as the Kripalu School of Yoga. She’s been an ordained minister for more than a decade. Her first novel, This Little Mommy Stayed Home, helped a lot of new mothers get through the night. The daughter of novelist Nancy Thayer, she lives in western Massachusetts with her husband, a professor of chemical engineering. You can pay her a virtual visit at samanthawilde.com. 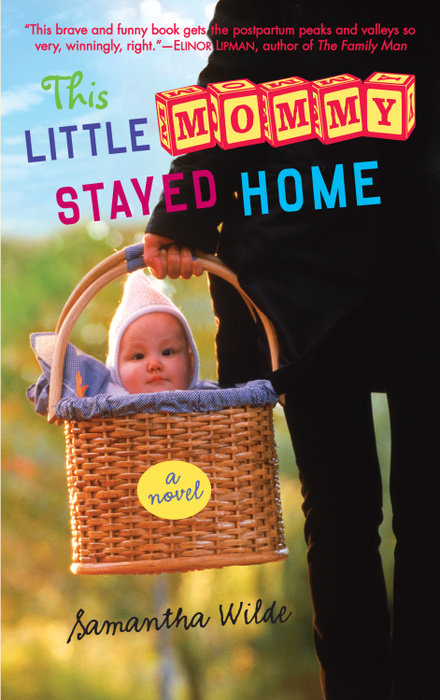