Connie Willis has won more Hugo and Nebula awards than any other science fiction author. Now, with her trademark wit and inventiveness, she explores the intimate relationship between science, pop culture, and the arcane secrets of the heart.

Sandra Foster studies fads—from Barbie dolls to the grunge look—how they start and what they mean. Bennett O'Reilly is a chaos theorist studying monkey group behavior. They both work for the HiTek corporation, strangers until a misdelivered package brings them together. It's a moment of synchronicity—if not serendipity—which leads them into a chaotic system of their own, complete with a million-dollar research grant, caffé latte, tattoos, and a series of unlucky coincidences that leaves Bennett monkeyless, fundless, and nearly jobless. Sandra intercedes with a flock of sheep and an idea for a joint project. (After all, what better animal to study both chaos theory and the herd mentality that so often characterizes human behavior?) But scientific discovery is rarely straightforward and never simple, and Sandra and Bennett have to endure a series of setbacks, heartbreaks, dead ends, and disasters before they find their ultimate answer. . . .

“Keen social satire touched with genuine humanity . . . Connie Willis's fiction is one of the most intelligent delights of our genre.”—Locus

An excerpt from Bellwether

hula hoop (march 1958—june 1959)—–The prototype for all merchandising fads and one whose phenomenal success has never been repeated. Originally a wooden exercise hoop used in Australian gym classes, the Hula Hoop was redesigned in gaudy plastic by Wham-O and sold for $1.98 to adults and kids alike. Nuns, Red Skelton, geishas, Jane Russell, and the Queen of Jordan rotated them on their hips, and lesser beings dislocated hips, sprained necks, and slipped disks. Russia and China banned them as “capitalist,” a team of Belgian explorers took twenty of them along to the South Pole (to give the penguins?), and over fifty million were sold worldwide. Died out as quickly as it had spread.


It’s almost impossible to pinpoint the beginning of a fad. By the time it starts to look like one, its origins are far in the past, and trying to trace them back is exponentially harder than, say, looking for the source of the Nile.

In the first place, there’s probably more than one source, and in the second, you’re dealing with human behavior. All Speke and Burton had to deal with were crocodiles, rapids, and the tsetse fly. In the third, we know something about how rivers work, like, they flow downhill. Fads seem to spring full-blown out of nowhere and for no good reason. Witness bungee-jumping. And Lava lamps.

Scientific discoveries are the same way. People like to think of science as rational and reasonable, following step by step from hypothesis to experiment to conclusion. Dr. Chin, last year’s winner of the Niebnitz Grant, wrote, “The process of scientific discovery is the logical extension of observation by experimentation.”

Nothing could be further from the truth. The process is exactly like any other human endeavor—messy, haphazard, misdirected, and heavily influenced by chance. Look at Alexander Fleming who discovered penicillin when a spore drifted in the window of his lab and contaminated one of his cultures.

Or Roentgen. He was working with a cathode-ray tube surrounded by sheets of black cardboard when he caught a glimpse of light from the other side of his lab. A sheet of paper coated with barium platinocyanide was fluorescing, even though it was shut off from the tube. Curious, he stuck his hand between the tube and the screen. And saw the shadow of the bones of his hand.

None of which makes Dr. Chin any the less deserving of the Niebnitz Grant’s million-dollar endowment. It isn’t necessary to understand how something works to do it. Take driving. And starting fads. And falling in love.

What was I talking about? Oh, yes, how scientific discoveries come about. Usually the chain of events leading up to them, like that leading up to a fad, follows a course too convoluted and chaotic to follow. But I know exactly where one started and who started it.

It was in October. Monday the second. Nine o’clock in the morning. I was in the stats lab at HiTek, struggling with a box of clippings on hair-bobbing. I’m Sandra Foster, by the way, and I work in R&D at HiTek. I had spent all weekend going through yellowed newspapers and 1920s copies of The Saturday Evening Post and The Delineator, trudging upstream to the beginnings of the fad of hair-bobbing, looking for what had caused every woman in America to suddenly chop off her “crowning glory,” despite social pressure, threatening sermons, and four thousand years of long hair.

I had clipped endless news items; highlighted references, magazine articles, and advertisements; dated them; and organized them into categories. Flip had stolen my stapler, I had run out of paper clips, and Desiderata hadn’t been able to find any more, so I had had to settle for stacking them, in order, in the box, which I was now trying to maneuver into my lab.

The box was heavy and had been made by the same people who manufacture paper sacks at the supermarket, so when I’d dumped it just outside the lab so I could unlock the door, it had developed a major rip down one side. I was half-wrestling, half-dragging it over next to one of the lab tables so I could lift the stacks of clippings out when the whole side started to give way.

An avalanche of magazine pages and newspaper stories began to spill out through the side before I could get it pushed back in place, and I grabbed for them and the box as Flip opened the door and slouched in, looking disgusted. She was wearing black lipstick, a black halter, and a black leather micro-skirt and was carrying a box about the size of mine.

“I’m not supposed to have to deliver packages,” she said. “You’re supposed to pick them up in the mail room.”

“I didn’t know I had a package,” I said, trying to hold the box together with one hand and reach a roll of duct tape in the middle of the lab table with the other. “Just set it down anywhere.”

She rolled her eyes. “You’re supposed to get a notice saying you have a package.”

Yes, well, and you were probably supposed to deliver it, I thought, which explains why I never got it. “Could you reach me that duct tape?” I said.

“Handing me a roll of tape is not a personal errand,” I said.


“Flip sighed. “I’m supposed to be delivering the interdepartmental mail.” She tossed her hair. She had shaved her head the week before but had left a long hank along the front and down one side expressly for flipping when she feels put-upon.

Flip is my punishment for having tried to get her predecessor, Desiderata, fired. Desiderata was mindless, clueless, and completely without initiative. She misdelivered the mail, wrote down messages wrong, and spent all her free time examining her split ends. After two months and a wrong phone call that cost me a government grant, I went to Management and demanded she be fired and somebody, anybody else be hired, on the grounds that nobody could possibly be worse than Desiderata. I was wrong.

Management moved Desiderata to Supply (nobody ever gets fired at HiTek except scientists and even we don’t get pink slips. Our projects just get canceled for lack of funding) and hired Flip, who has a nose ring, a tattoo of a snowy owl, and the habit of sighing and rolling her eyes when you ask her to do anything at all. I am afraid to get her fired. There is no telling who they might hire next.

“Then set it down,” I said, stretching to reach the tape. It was just out of reach. I inched the hand holding the side of the box shut higher and leaned farther across the lab table. My fingertips just touched the tape.

“It’s breakable,” Flip said, coming over to me, and dropped the box. I grabbed to catch it with both hands. It thunked down on the table, the side gave way on my box, and the clippings poured out of the box and across the floor.

“Next time you’re going to have to pick it up yourself,” Flip said, walking on the clippings toward the door.

I shook the box, listening for broken sounds. There weren’t any, and when I looked at the top, it didn’t say FRAGILE anywhere. It said PERISHABLE. It also said DR. ALICIA TURNBULL.

“This isn’t mine,” I said, but Flip was already out the door. I waded through a sea of clippings and called to her. “This isn’t my package. It’s for Dr. Turnbull in Bio.”

“You need to take this to Dr. Turnbull.”

She rolled her eyes. “I have to deliver the rest of the interdepartmental mail first,” she said, tossing her hank of hair. She slouched on down the hall, dropping two pieces of said departmental mail as she went.

“Make sure you come back and get it as soon as you’re done with the mail,” I shouted after her down the hall. “It’s perishable,” I shouted, and then, remembering that illiteracy is a hot trend these days and perishable is a four-syllable word, “That means it’ll spoil.”

Her shaved head didn’t even turn, but one of the doors halfway down the hall opened, and Gina leaned out. “What did she do now?” she asked.

“Duct tape now qualifies as a personal errand,” I said.

Gina came down the hall. “Did you get one of these?” she said, handing me a blue flyer. It was a meeting announcement. Wednesday. Cafeteria. All HiTek staff, including R&D. “Flip was supposed to deliver one to every office,” she said.

“What’s the meeting about?”

“Management went to another seminar,” she said. “Which means a sensitivity exercise, a new acronym, and more paperwork for us. I think I’ll call in sick. Brittany’s birthday’s in two weeks, and I need to get the party decorations. What’s in these days in birthday parties? Circus? Wild West?”

“Power Rangers,” I said. “Do you think they might reorganize the departments?” The last seminar Management had gone to, they’d created Flip’s job as part of CRAM (Communications Reform Activation Management). Maybe this time they’d eliminate interdepartmental assistants, and I could go back to making my own copies, delivering my own messages, and fetching my own mail. All of which I was doing now.

“I hate the Power Rangers,” Gina said. “Explain to me how they ever got to be so popular.”

She went back to her lab, and I went back to work on my bobbed hair. It was easy to see how it had become popular. No long hair to put up with combs and pins and pompadour puffs, no having to wash it and wait a week for it to dry. The nurses who’d served in World War I had had to cut their hair off because of lice, and had liked the freedom and the lightness short hair gave them. And there were obvious advantages when it came to the other fads of the day: bicycling and lawn tennis.

Connie Willis is a member of the Science Fiction Hall of Fame and a Grand Master of the Science Fiction and Fantasy Writers of America. She has received seven Nebula awards and eleven Hugo awards for her fiction; Blackout and All Clear—a novel in two parts—and Doomsday Book won both. Her other works include Passage, Lincoln’s Dreams, Bellwether, Impossible Things, Remake, Uncharted Territory, To Say Nothing of the Dog, Fire Watch, and Miracle and Other Christmas Stories. Connie Willis lives in Colorado with her family, where she deals with the delights (and the more maddening aspects) of our modern oh-so-connected world on a daily basis. 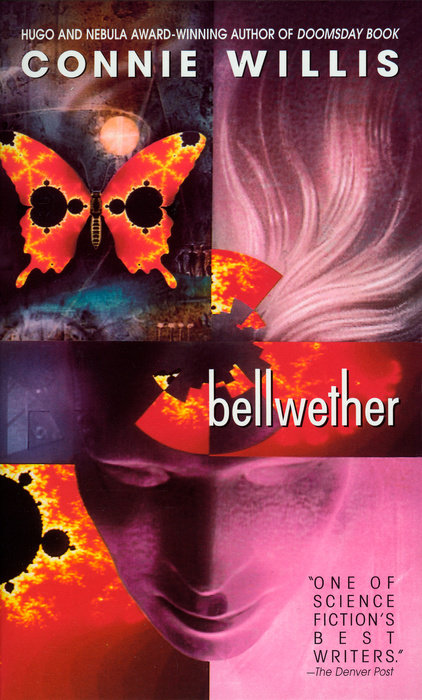